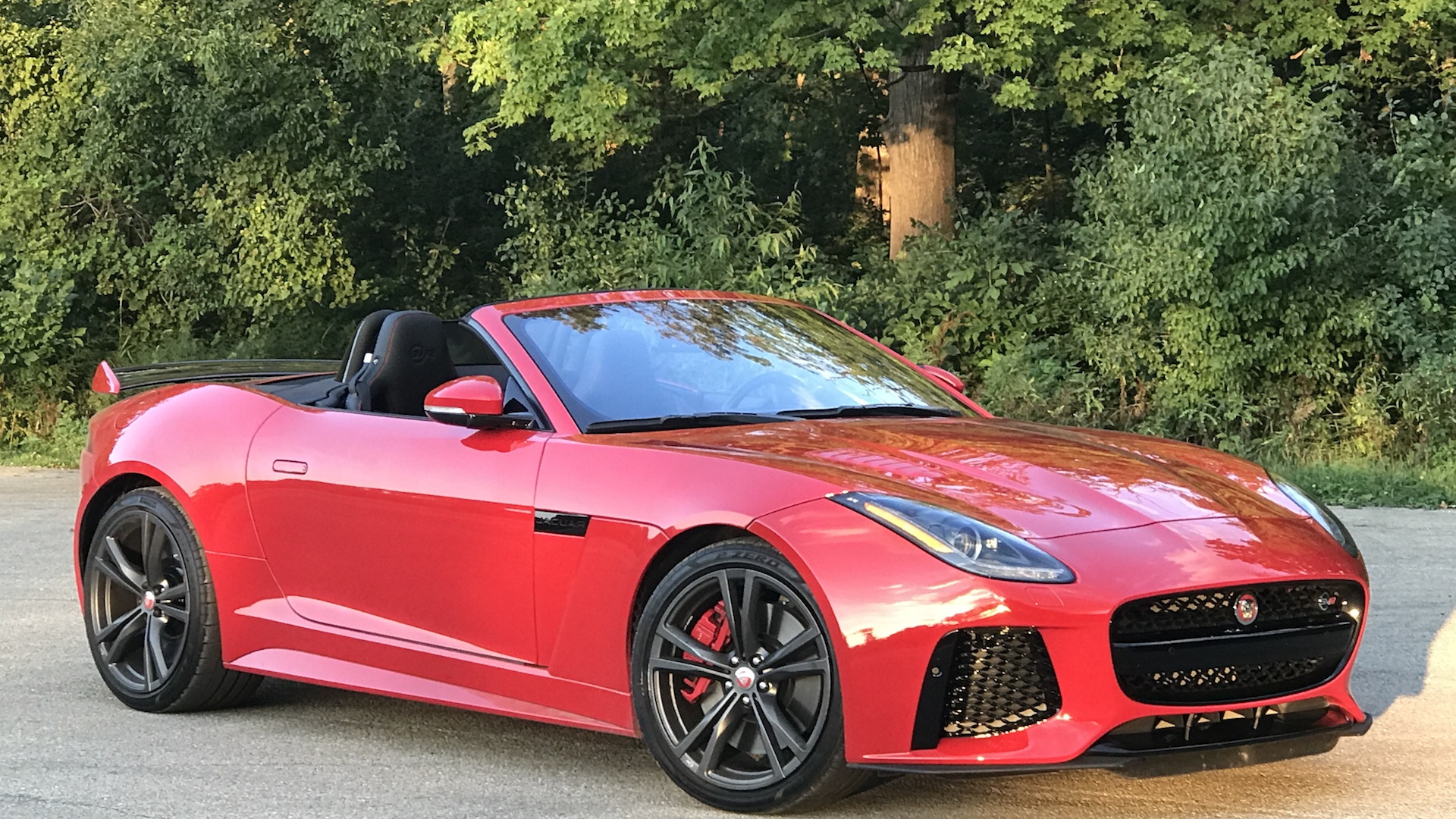 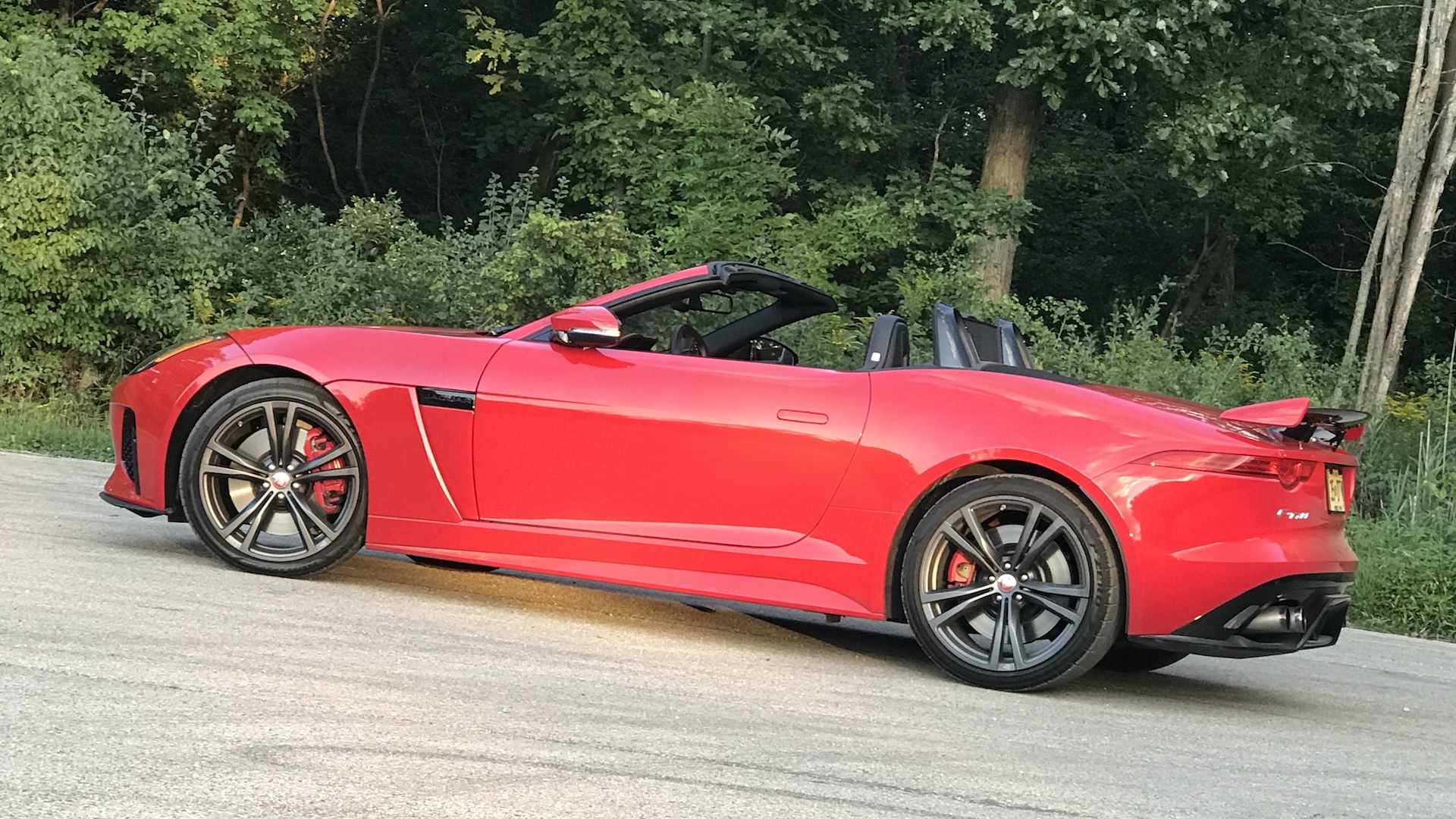 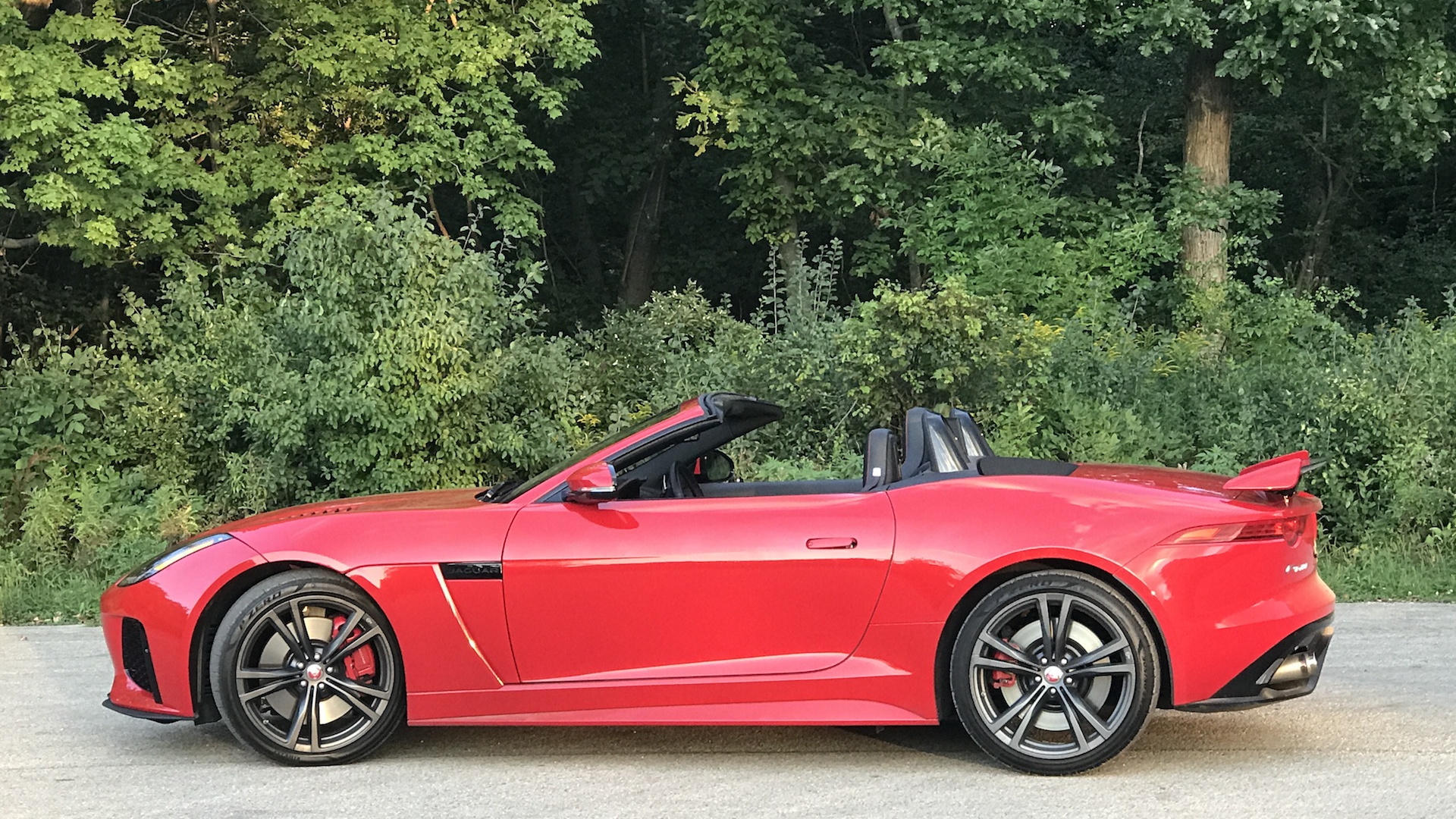 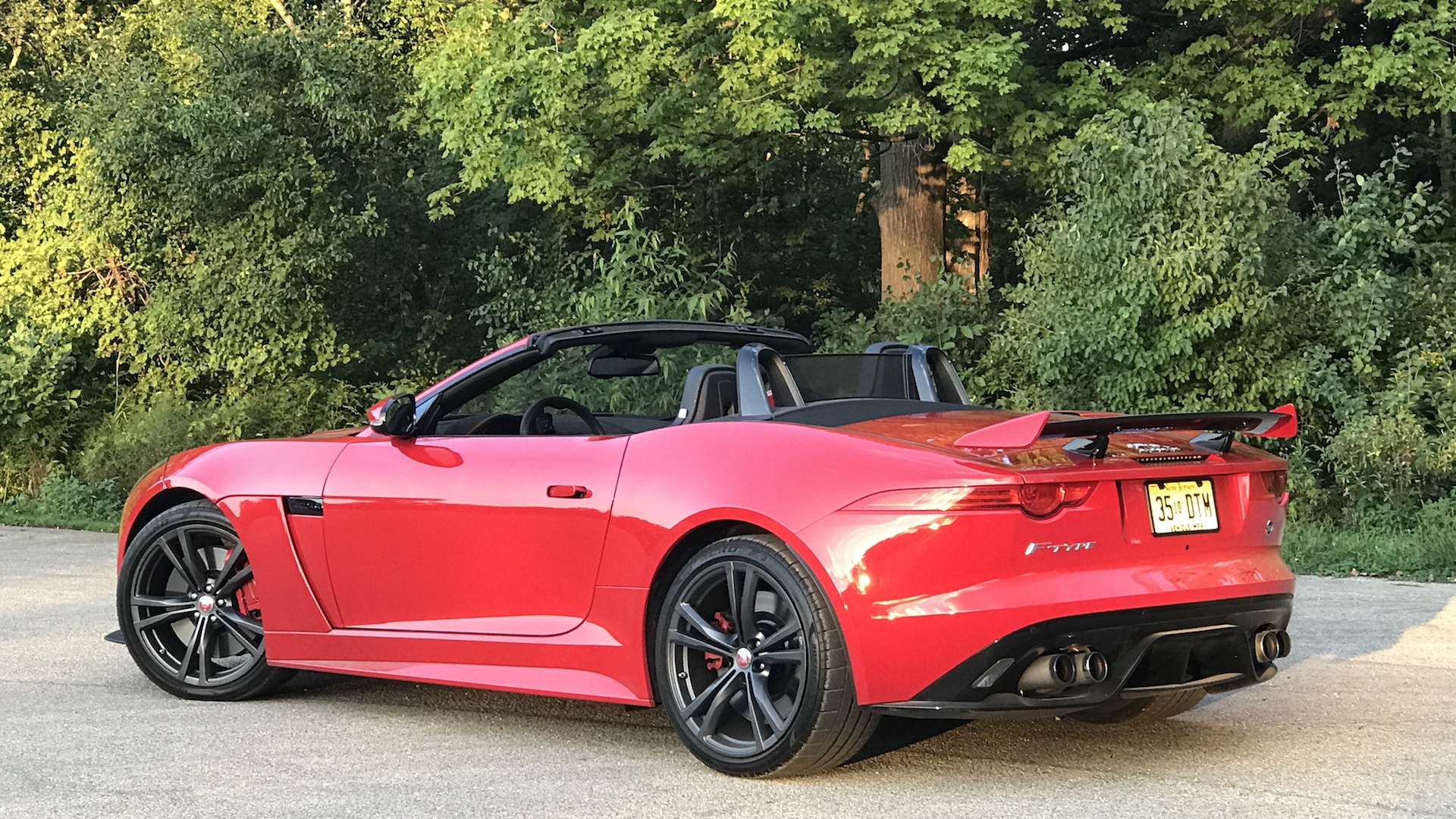 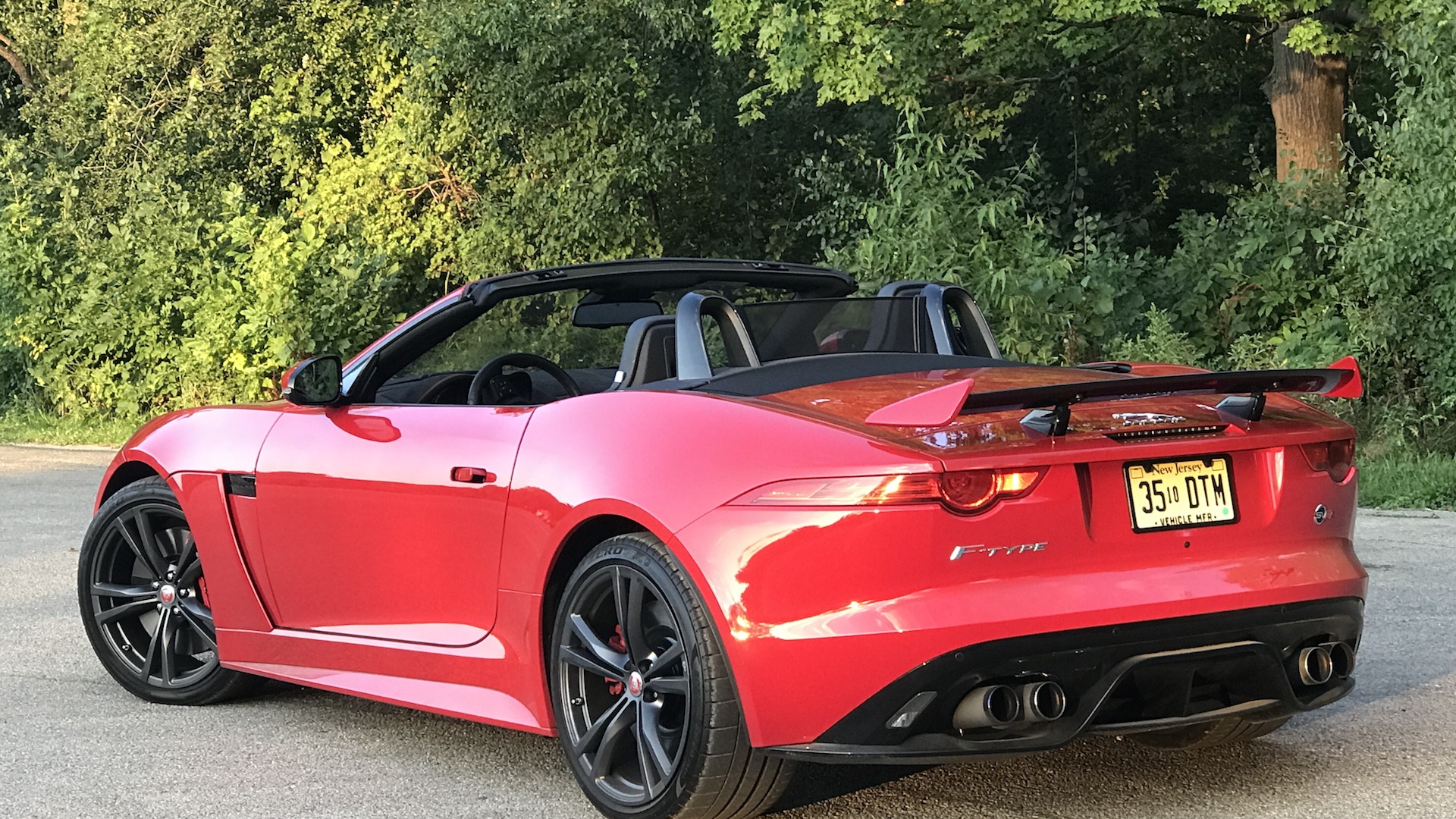 I'm headed to Autobahn Country Club in Joliet, Illinois, and I'm a little nervous. Just yesterday I took delivery of a 2017 Jaguar F-Type SVR Convertible, and today I'm going to drive it for one 20-minute session on Autobahn's 1.5-mile North Track. Thing is, I'm not sure I can handle this thing.

This car seems twitchy. The throttle is sudden, and this English Corvette can hit 60 mph in just 3.5 seconds. The steering is quick. It has all-wheel drive, but the rear end seems to want to kick out rather easily. And that engine note that sounds so cool when you goose it in a straight line is intimidating when it might send you careening out of control. I don't want to mess with it on the street. Maybe the wider, more controlled dimensions of a racetrack will reveal a more controlled character. Or maybe I'll spin it and make a fool out of myself.

More than an R

The F-Type R is already a bonkers sports car, but the SVR ups the game even further. Instead of 550 horsepower from the supercharged and super throaty 5.0-liter V-8, it blasts out 575 horses and 516 pound-feet of torque, gains of 25 and 14, respectively, thanks to an SVR-specific engine calibration. An Inconel Titanium exhaust sheds 35 pounds of weight and acts as a Marshall Stack for the Jag's heavy metal soundtrack.

All-wheel drive is standard on the SVR, and it's tuned to send more of the power to the rear wheels. The only transmission is an 8-speed automatic, which has been tweaked to shift quicker. The tires, 20-inch Pirelli P Zero PZ4s, are slightly wider, with 265/35s up front and 305/30s in the rear. The steering, damping, and stability control are tweaked for the SVR, and the stability control can be turned off completely. I will not be doing that.

The front roll bar is 5 percent softer, while the rear bar is a bit stiffer and so are the rear suspension knuckles. A softer front and stiffer rear is a formula for oversteer. Oh boy, that's scary.

It gets some exterior changes, too, mostly in the name of aerodynamics and cooling. The front fascia has bigger air intakes and the hood has vents for better cooling. To handle the convertible's 195 mph top speed (the coupe hits the 200 mph mark), the front fenders get vents to quell front axle lift, underbody trays smooth out airflow underneath, and the rear has a unique diffuser and a prominent and active carbon fiber wing that raises at 60 mph.

I use that audio system to listen to my "Game of Thrones" audiobook during my 80-minute drive to Joliet. The stark violence helps calm my nerves before the track battle I face.

I'm not a member here, but the good folks at Autobahn are letting me head out with the Group C cars, which are performance-oriented street cars. For this session, it's just me and one other guy in a hot Porsche 911. That's good because if I spin this thing I don't want to get hit.

Turns out my worries are unfounded. Yes, this car is a bit twitchy. It's reactions are indeed sudden. But given the space of a racetrack, it settles into predictability.

After that initial twitch, which sees the rear end kick out a bit in the opposite direction of the turn, the car settles down. It squats in the rear, with a bit of a nose-up attitude. It's actually quite forgiving at this point, as getting the car through carousel-type turns is a dance of feeding in bits of brake and throttle. Jumping on it hard too early when exiting a turn could send the rear end out too far, but I'm surprised how controllable it is near the limit. It's a bit sloppy. This is no scalpel like a Porsche 911. But it's fun.

Unfortunately, that fun, and the brakes, don't last too long. This car is outfitted with the base brakes, which feature rather pedestrian 15-inch front rotors with dual-piston calipers and 14.8-inch rear rotors with single-piston calipers. On my fourth lap, the pedal starts to get spongy and sink deeper to the floor. The binders are still there; I just really have to rail on the pedal to get the car to slow down.

After 10 minutes, though, I get a warning on the instrument panel that the brakes have overheated. That's it. I stay out for five more laps at touring speeds to run air over the brakes to see if that will bring them back. It doesn't work. Apparently, I've overheated the brake fluid, and the Jaguar is done for the day. Maybe some higher grade brake fluid would help, but the brakes just aren't substantial enough for a car like this.

For as disappointing as the Jaguar is on the track, it's a ball on the street. The engine note is pure joy, and Jaguar provides an exhaust button on the center console that opens up more baffles to make it louder. After a few miles behind the wheel, I learn to go smoother on the steering and throttle, and that takes care of the twitchiness. The ride is actually livable, even on Chicago's minefield of potholes.

Top-down driving is a ball, as always, especially as the beautiful Midwestern days wind down, and the structure of this car allows no cowl shake. Perhaps this car's greatest strength is it's look. Sinister and beautiful at the same time, like Queen Cersei, this beast gets noticed. It's obvious that rear wing wasn't planned for from the beginning, though, as it obscures the Jaguar badge underneath.

I see two main issues, though. Those brakes are an embarrassment at this price. The F-Type SVR puts up near supercar numbers, but it's stopped by brakes you'd expect on a V-6 Camaro. The other main issue is the very existence of the Porsche 911. Yes, this is a better looking car, but it can't perform like the car it wants to challenge. It can't handle the rigors of the track, and its twitchy street character and somewhat sloppy track handling wouldn't be accepted in Stuttgart.

I'm glad that I can handle it, but Jaguar still has some work to do.