During the event held on Sunday, a prototype for Faraday Future’s first model, the FF 91, raced to the clouds on Colorado’s famous mountain.

The 1,050-horsepower electric car was entered in Pikes Peak’s Exhibition class and clocked in a time of 11:25:083, thanks to the efforts of Faraday Future engineer Robin Shute. The video shows Shute’s run during the lower third of the climb.

His time is about 23 seconds faster than what a Tesla Model S P90D achieved in the 2016 Pikes Peak. Of course, the Tesla had a lot less power. It featured an electric motor at the front axle delivering 259 hp and another at the rear delivering 503 hp.

The Tesla was also taken from a production line. Faraday Future’s prototype, on the other hand, doesn’t even look like it has a full interior. 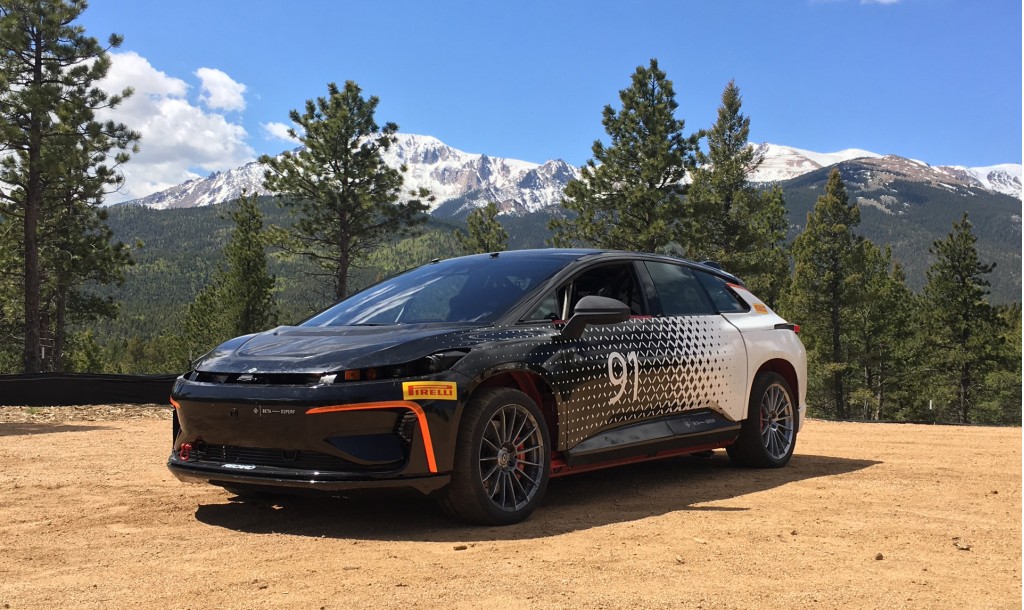 Faraday Future says the stunt helped the company’s testing of the FF 91. In particular, things like the batteries, electric motors and handling were all pushed to the limits during the final run and many practice runs. The prototype was said to have been fitted with production representative hardware, software and aerodynamics. The FF 91 will come standard with an electric drive system at the rear. An electric drive system will be available at the front to create all-wheel drive. The latter version was used for the Pikes Peak stunt.

“We’re proud of our time, but this is about the quality of our propulsion system more than just a one-time race,” Pete Savagian, Faraday Future’s head of powertrain and battery systems, said after the run. “Our focus was on repeatability—to reach the peak without overheating the vehicle, and to be able to do so again and again.”

Faraday Future is hopeful of having the FF 91 in production in 2018, although the company is having trouble getting its Nevada plant ready on time which means the deadline might have to be pushed back.

This year’s overall winner at Pikes Peak was Romain Dumas. Piloting a Norma MXX RD Limited in the Unlimited class, Dumas managed a time of 9:05.672.