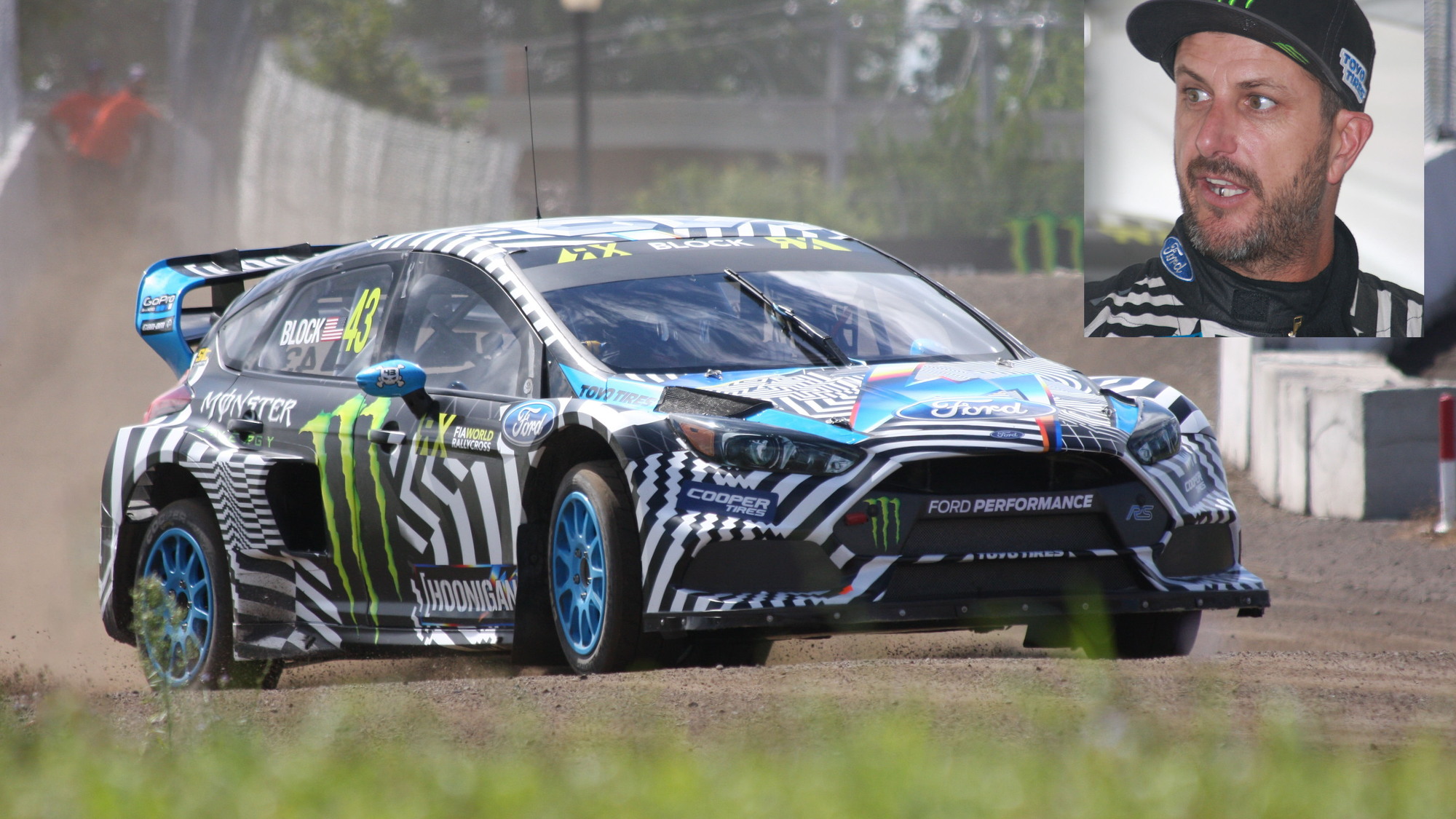 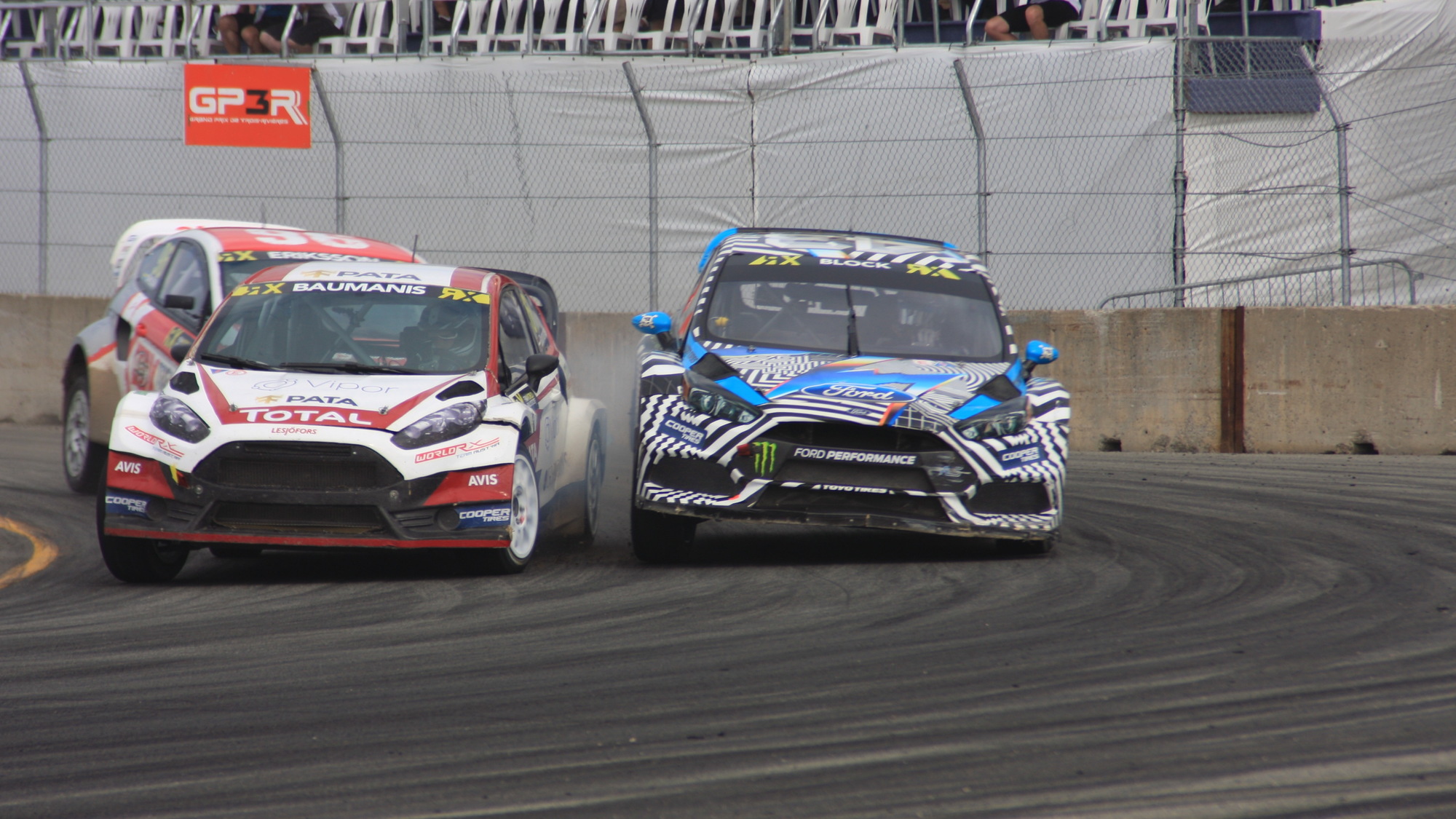 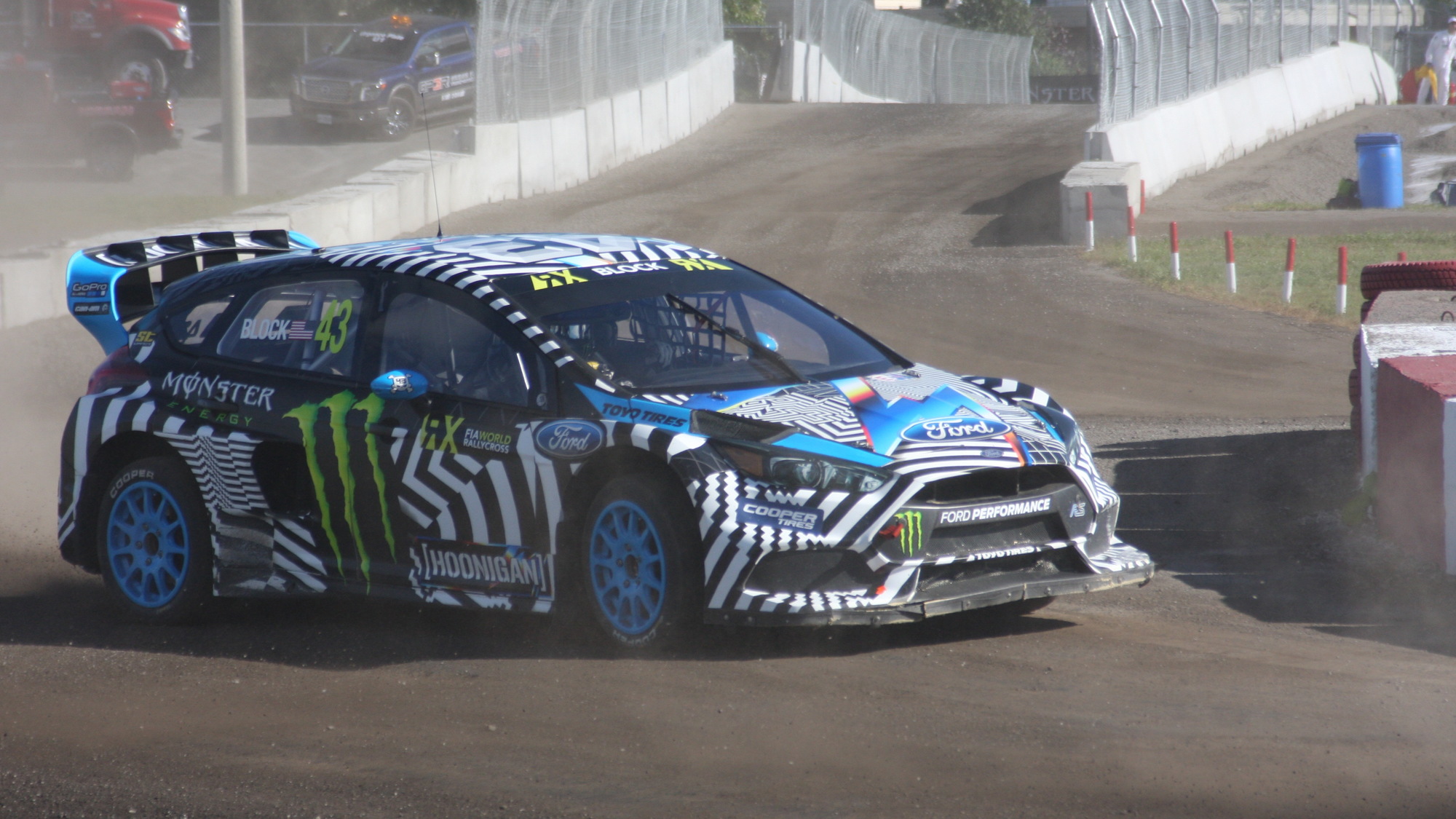 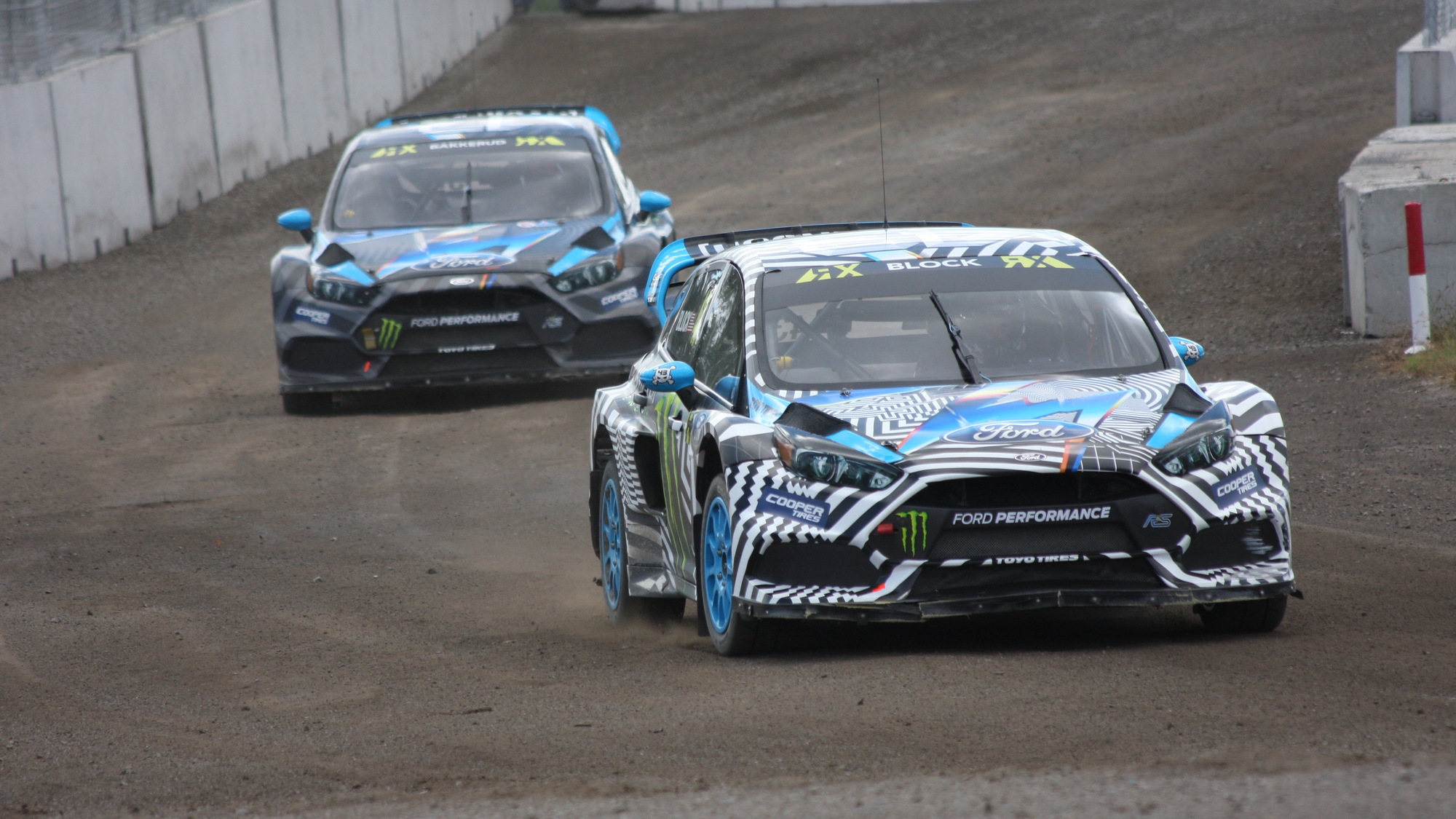 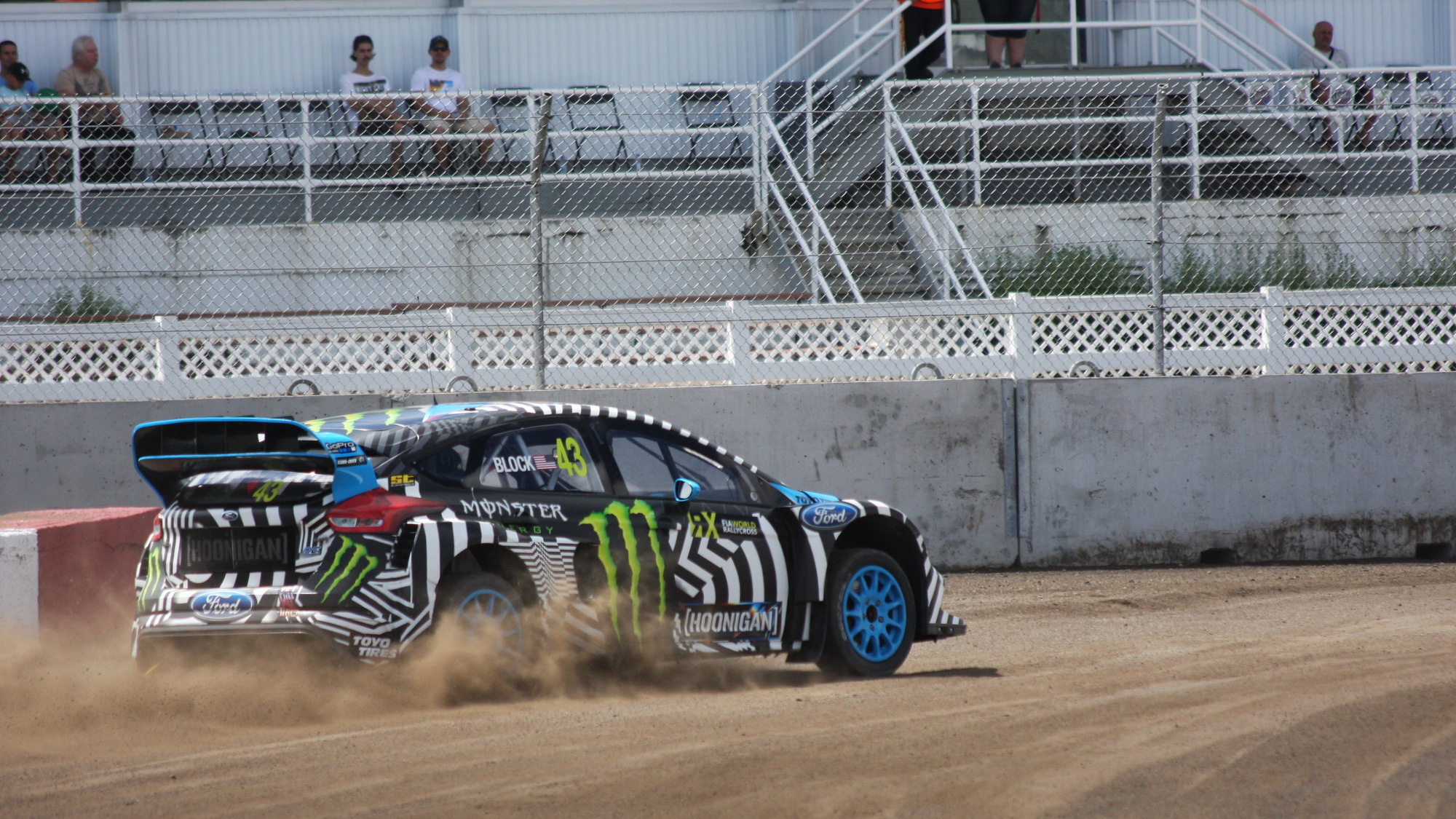 Ken Block started racing at what many would consider an advanced age. The then-DC Shoes marketing executive went to a rally school at the age of 36 and immediately took to it.

By the next year he was racing, and his big break came a few years later. Nobody gave it to him, though. He created it. He released his first gymkhana video in 2008, and it soon went viral as car enthusiasts appreciated the insane car control on display. Corporations like that sort of guerrilla advertising and they flocked to him, giving him the money to race full time.

Block has since released seven more gymkhana videos and it appears that he is working on his ninth. He also races in the World Rallycross series, acts as a consultant for Ford Motor Company, and generally has a great time living life.

I recently had to opportunity to sit down for an interview with Block during the weekend of the G3PR World Rallycross race in Canada. I found him to be forthright, down to earth, and genuinely happy with his accomplishments. Check out the interview below. You'll learn what makes this automotive hero tick.

How did you start playing around with cars?

I've been a fan of stage rally since I was quite young. Back in the '70s and '80s you were subject to whatever was on TV. I know I saw Pike's Peak on TV. I saw the Audi quattros in the '80s. I saw some stage rally.

In the magazines in the '80s there was a lot of emphasis on the all-wheel-drive systems because they were developing it in rally racing and it eventually made it into cars. Then '90s were the years of Collin McRae and Tommi Makinen.

I was never really that interested in American motorsports, mainly oval or drag racing. My brother did some drag racing but it just wasn't something I was really interested in.

I also grew up riding dirt bikes, so I liked the cars that I could relate to because they jumped and slid in the dirt. I think that was the simple attraction for rally to me. I never thought that rally existed in the States, and in 2004 Travis Pastrana did a few rallies in the States. It just woke me up to the fact that I could actually race rally in the States.

In the middle of 2004 I did a rally school in New Hampshire called Team O'Neil just for fun, to try it out. I just fell in love with it and started racing in 2005 full time.

What were you doing prior to that?

I've always had the desire to compete, but I was busy with DC Shoes for about ten years, and before that we had some other clothing companies. Once I started racing rally I toned back all of my work that I did at DC. I got really focused on the racing.

When you went to that school in 2004, did you immediately take to it?

Yes, I took to it quite easily because I had been a fan of it since I was quite young. I mimicked that driving style. I lived on a twisty road at one point in my life. I drove down the road cutting across the line and all that sort of thing. That interest was there, I just needed to learn how to apply it properly to a car. Once I was instructed on how to do that, I just really, really fell in love with it. And then I could do nothing but get into the car as much as possible to try and learn and better myself.

So, then I really had a fun career racing in Rally America, and it took me to a pretty high level. Then I continued on to develop those skills even more in the WRC and now in World Rallycross.

What was your first race car?

I raced with Travis Pastrana. The first year I beat him. The second year I won my first national event before he won a national event, but then he beat me every season for the rest of the time that we raced together. He would get first and I would get second in the championship.

It was really fun. We were basically on the same team racing a national level championship. We learned a lot, and we just had a good time together.

How did the gymkhana videos start?

I did two of those events. They were these grassroots events, parking lots with cones. I thought, "Sweet, I can get more seat time and do it cheaply in Southern California." I built a car specifically to do that, which is the car in the first gymkhana video. When that car was done, the guy running the series quit doing it. I had this really fun car, but nothing to do with it now.

We went back to one of the places where I did a gymkhana race, El Toro airfield, which is in Orange County. We just played around for a day and filmed it, testing and practice. If you look at that video online, it doesn't say "Gymkhana 1," it says "Gymkhana Testing and Practice," because that's what I was doing.

I did one day of it, and when I looked at the footage a couple of weeks later, I was like, "Hey, this is actually really good, this is fun." We went back a second day to make the video flow as a course. I went back and filmed certain segments to make it feel like I was driving a course, re-filmed a couple things like the segue thing because we didn't like the first take. We put that video out as something for fun, and didn't think it would get the views that it got. It just skyrocketed.

It must have helped your racing career.

Absolutely. Viral videos were really coming online at that time in a big way. Basically, all of my sponsors really liked the exposure from that video. The way that it helped me was to be able to get more money out of our sponsors to be able to do more racing.

Why keep doing them?

Well, my sponsors like the exposure. It's a giant commercial basically that they get their logos on. The first one was just by chance. I was lucky that it did so well. From there, it became a marketing exercise, which is why the second one is called an infomercial. We realized these are getting good exposure and the sponsors were very happy about investing in them because they were getting a return on that investment.

One of the biggest problems for racers is getting sponsors and being able to race at all. You've created a way to do it.

That's one thing that a lot of the other racers didn't realize in the beginning: how much social media can help them. A lot more people nowadays, especially in the motorsport world, understand that way better than they did 9 years ago. Travis Pastrana and myself were at the forefront of getting motorsports exposed through the Internet, through social media. We're both lucky that it's been quite successful. Me more than him, but we were both doing it together.

Do you think that you helped create the World Rallycross series?

I don't like to take credit for that, but I think that I've been part of a movement that has exposed rallying and rallycross to a piece of America that had never seen it--and gymkhana. Really, before the Internet, most Americans had probably not seen stage rally or rallycross. It's been mostly a European sport. I take a lot of pride in that I'm a rally driver, and I've actually been able to help expose the sport that I love to a lot of people that have never seen it before.

How did you get hooked up with Ford?

I think it was actually a mutual thing because I wanted to race in WRC and Subaru wasn't there, so Ford was a great avenue. They had certain desires for what they wanted. For me, the vehicles were there for me to do what I wanted to do, which was WRC and rallycross and gymkhana. The level of commitment that they were able to give me, marketing and interaction, was a big improvement over what I had with my Subaru program. It was a good partnership because I got what I wanted and they got what they wanted.

You've done more with Ford than just race. You helped develop the Focus RS. How did that work?

With the RS, I mainly did some testing and development work with the suspension and drivetrain. Beyond that, I've been lobbying for years for all-wheel drive. I cornered Edsel Ford and said this is what we need. Basic idea stuff, too, direction and what they could do. Of course, there were some options with what could be done with all-wheel drive.

A lot of that was big conversations that we had around what the consumer would want, what the benchmarks were versus other vehicles, and what performance was desired.

It was actually really fun because I had been involved with race car development for many years, lots of testing and that sort of thing, but never a production car. The mindset of how you develop all that is quite different than a race car. It's parts that can last a long time on the street, where what we develop for a race car is much more short term. That was the only time I have ever been involved with a production car.

Is rallycross more fun than WRC?

They're just fun in different ways. The saying goes a rally driver sees a thousand corners once, whereas a circuit racer sees one corner a thousand times. So, it's just a totally different feeling of using a car. I enjoy the adventure of stage rally and nailing certain corners and being on the edge of the next one. In rallycross, it's the feeling of perfection, nailing the corner, getting the start right, getting the car set up right. That's a different level of fun but in the same vehicle.

I consider myself one of the best race car drivers in the world because the cars that we use can be used in so many different ways. For me, stage rally and rallycross are the most fun ways to go out and drive a car.

Where do you want to go from here?

I'm very lucky to have an amazing career with some of the best sponsors in the world to do what I want to do. I'm going to keep doing these things until I can't do it anymore. The main thing I get asked all the time, do I want to do Dakar, or the Baja 1000, or Le Mans, or stuff like that. My simple answer is no. I'm very lucky to have a career racing exactly what I dreamed of racing as a kid. I truly enjoy it, I enjoy it more than I ever would have imagined. I want to keep doing it for as long as I possibly can. I'm very lucky that I put myself in this position that I get to race some of the best race cars in the world. I want to do the best that I can.