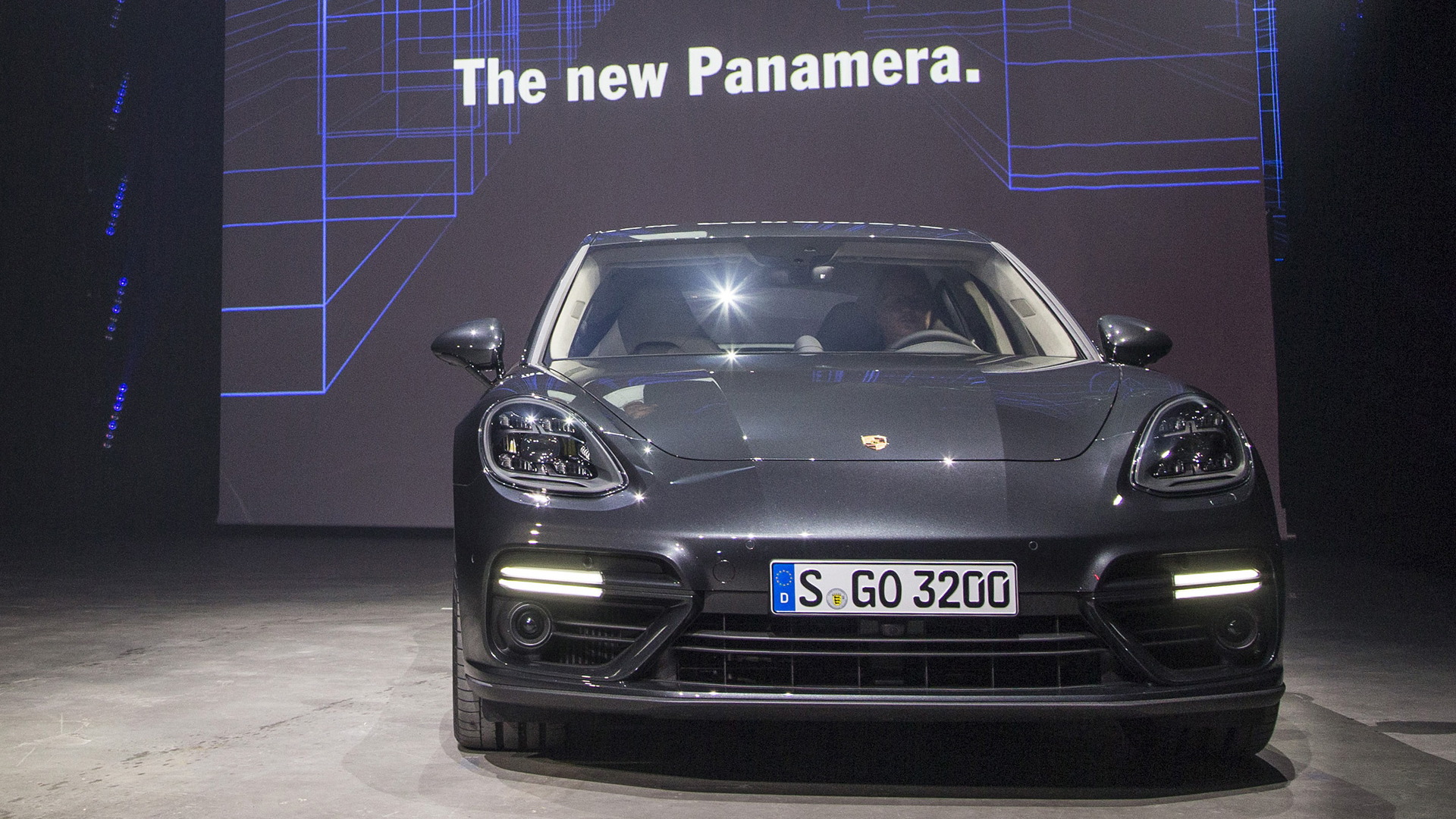 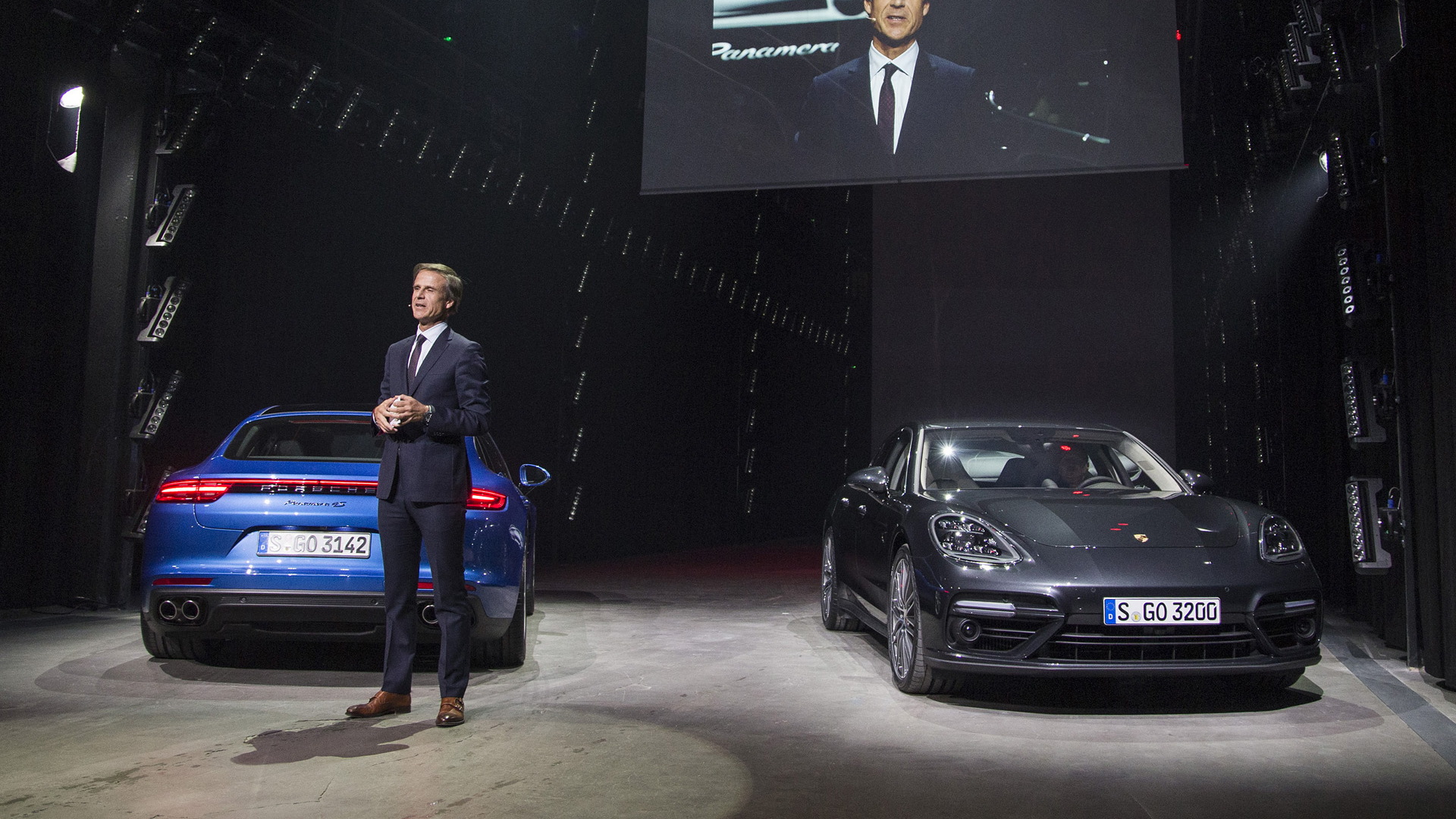 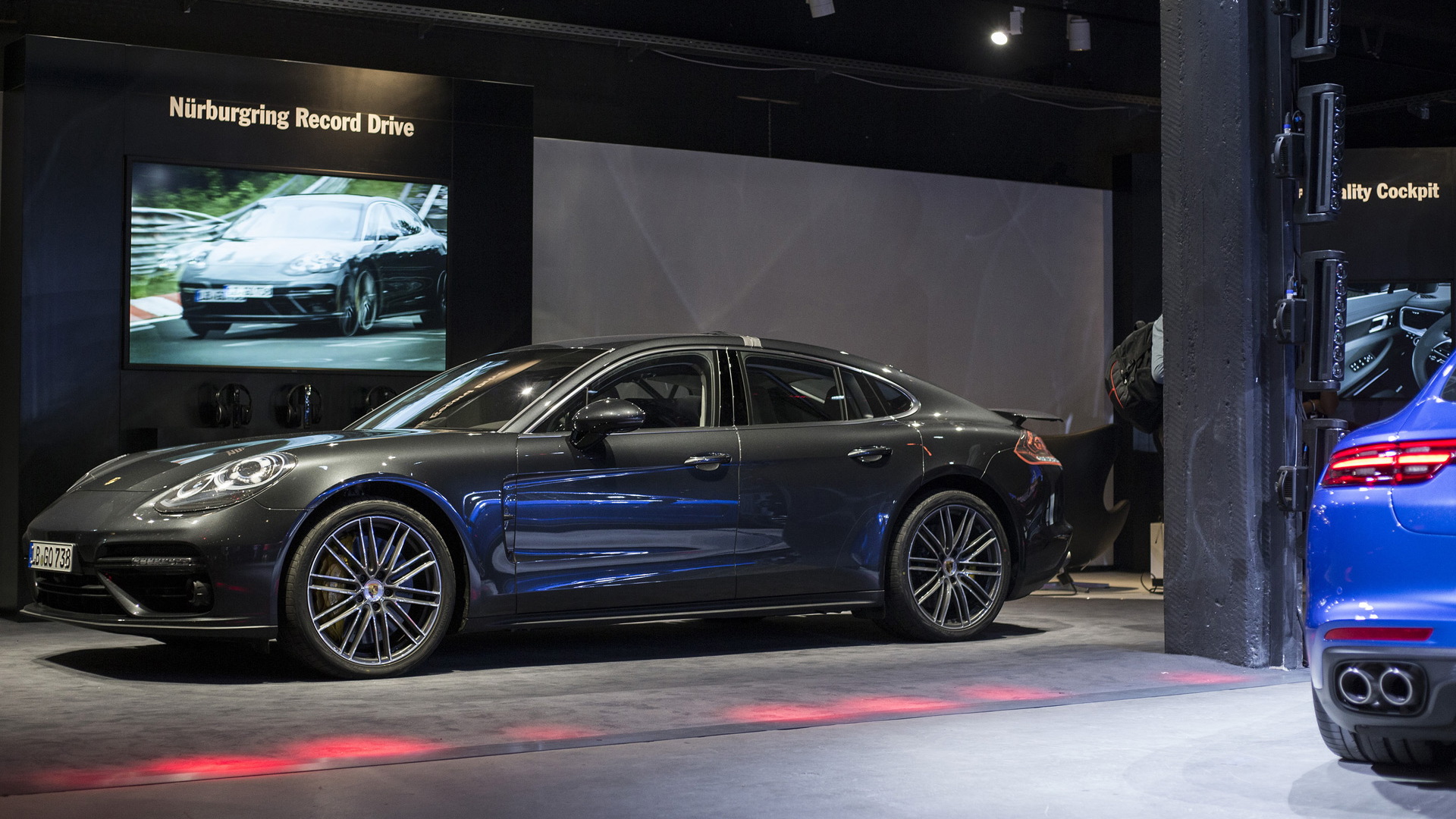 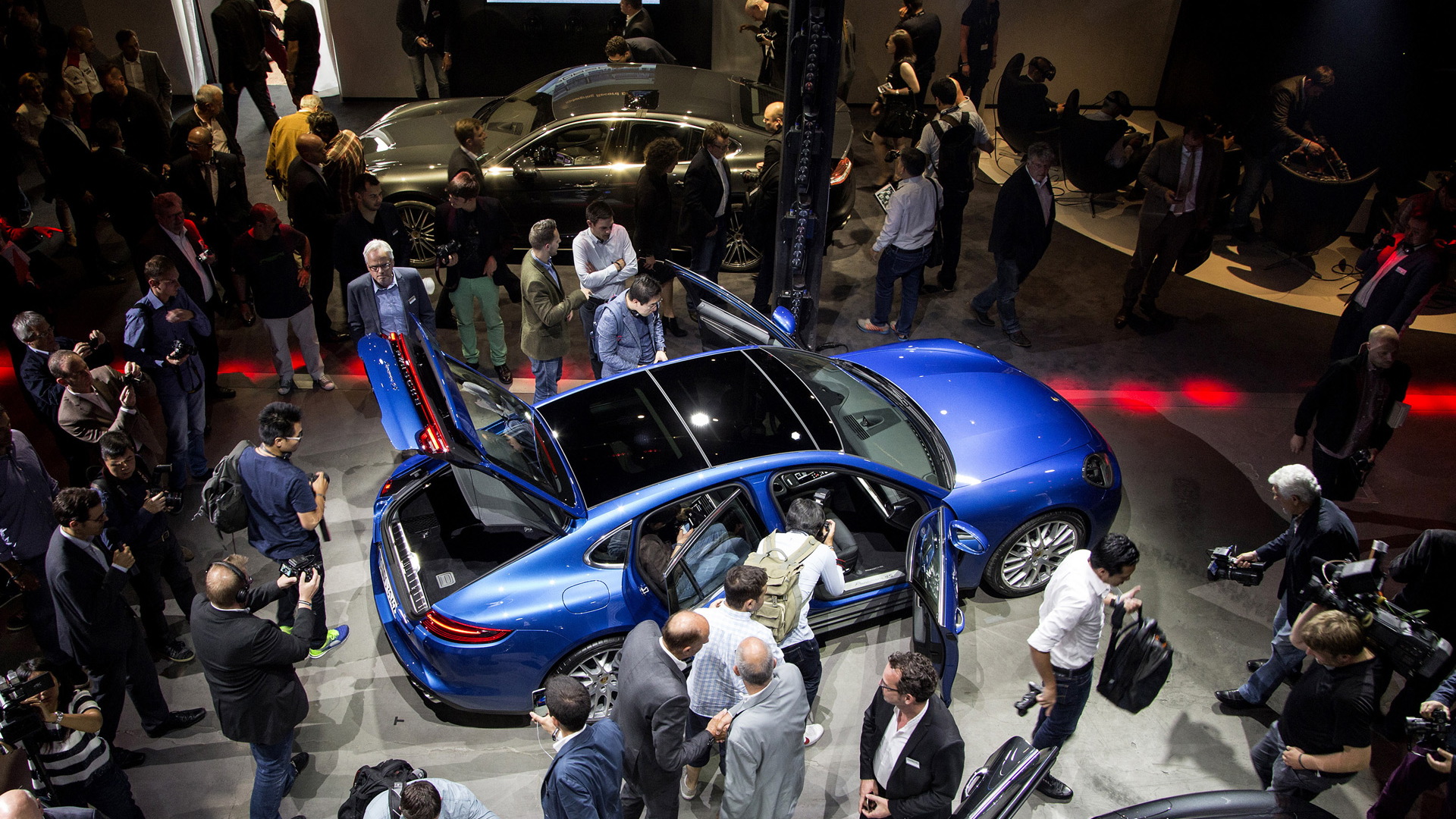 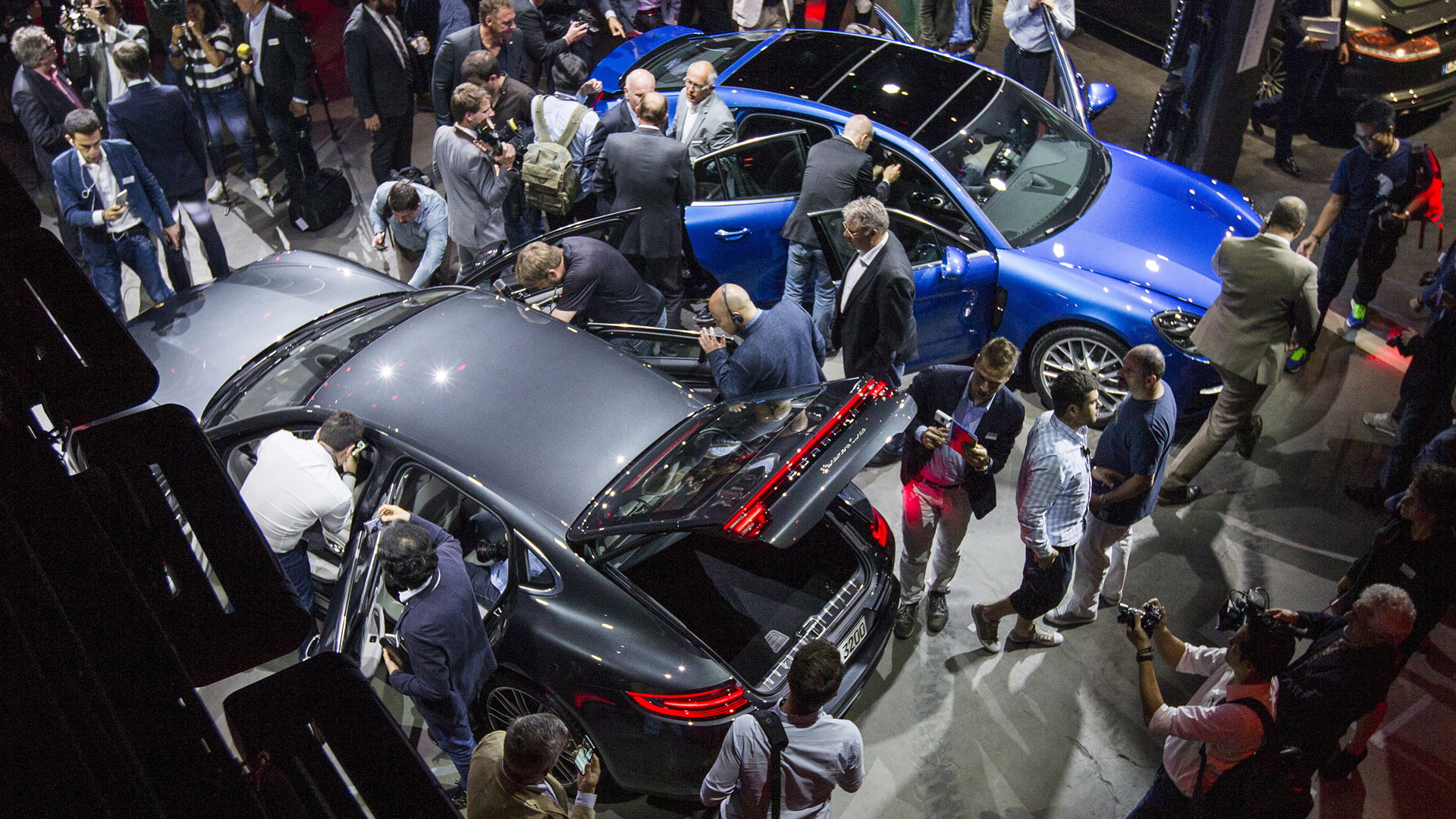 Porsche has released information on the second-generation of its flagship sedan (it's actually a hatchback), and the 2017 Porsche Panamera is a better looking car than the first generation.

The new Panamera is an evolution of the last car, not a revolution, but the lumpy look of the roof--there to provide plenty of headroom--is smoothed out and sleeker. The car rides on a new modular platform known as the MSB, and while the proportions grow for 2017, the car looks lower. Length is up by 1.3 inches to 198.8 inches, wheelbase grows 1.2 inches to 116.1 inches, and width and height both increase 0.2 inch to 76.3 and 56.0 inches, respectively. The extra wheelbase was achieved by shifting the front wheels forward, which had the secondary effect of shortening the front overhang and lengthening the rear overhang.

The front end features a new A-shaped lower air intake, giving the nose a new look. The hood also sits lower thanks to new compact engine designs. Intricate detail in the LED headlights (LED matrix headlights will be optional), with their 4-point LED driving lights, provides the car with a high-tech look, while the new LED taillights have a 3D look and resemble the units on the latest 911. In fact, the whole car's shape, from the low, flat nose to the rounded body panels to the extendable rear spoiler to the pronounced rear haunches, is inspired by the 911. The body is made almost entirely of aluminum, though there are also some optimized steel alloys. 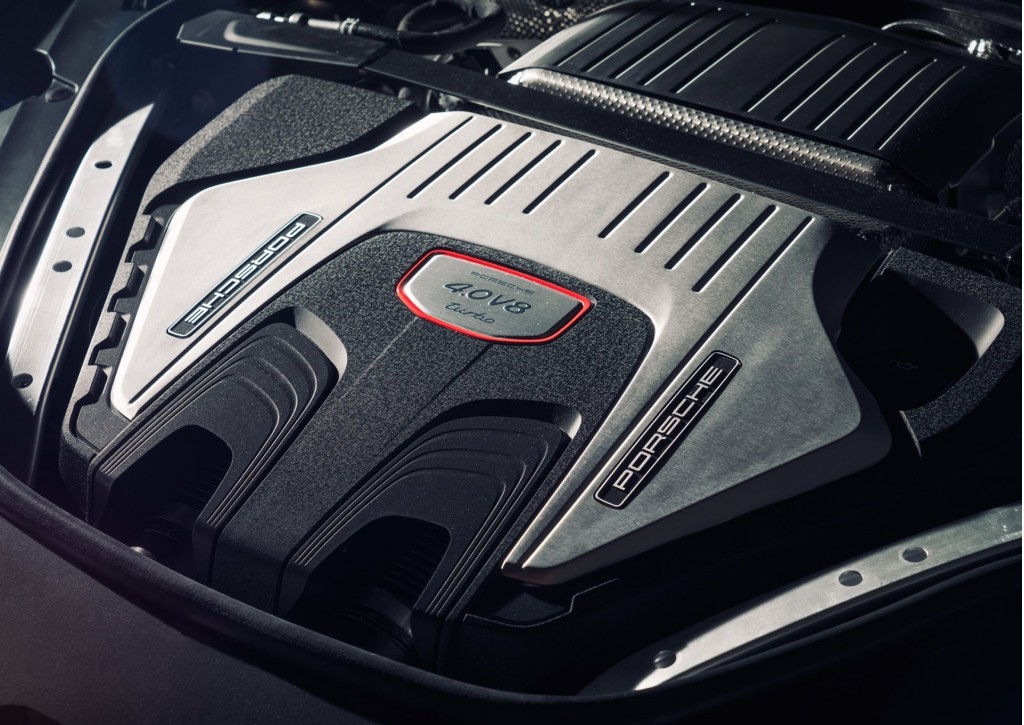 U.S. buyers of the Panamera will have a choice of two engines, but both models will come with all-wheel drive. Power in the Panamera Turbo will come from a new twin-turbocharged 4.0-liter V-8 producing 550 horsepower (30 more than the last model) and 567 pound-feet of torque. It will also come with cylinder deactivation to shut down four cylinders under light load conditions to save fuel. Porsche says the Turbo will be able to accelerate from 0 to 62 mph in as little as 3.6 seconds.

The base engine in the Panamera 4S will be a twin-turbocharged 2.9-liter V-6 making 440 hp (20 more than in outgoing S models) and 406 lb-ft of torque. It's 0 to 62 mph time will be 4.2 seconds. Both engines will have "hot Vs." In other words, the turbos will be located between the cylinder banks.

A third engine will be available in Europe. It is a new twin-turbocharged diesel V-8 that churns out 422 hp and a whopping 627 lb-ft of torque in the Panamera 4S Diesel.  Though it has two turbos, the diesel can use one or both of them; it will use one at low speeds and both above 2,700 rpm. Porsche says 0 to 62 mph will arrive in as little as 4.3 seconds with fuel economy much improved over the gas V-8. The diesel will come with all-wheel drive.

All of the engines will be linked to a new 8-speed dual-clutch transmission.

Porsche's press release gave no information about a new plug-in hybrid model or the sleek wagon bodystyle, both of which should come after launch.

While there is also no word on how much stiffer the structure will be, Porsche says the car will offer rear steering, electronically controlled dampers, torque vectoring, active roll compensation, and a three-chamber air suspension. Wheel sizes will range from 19 to 21 inches. 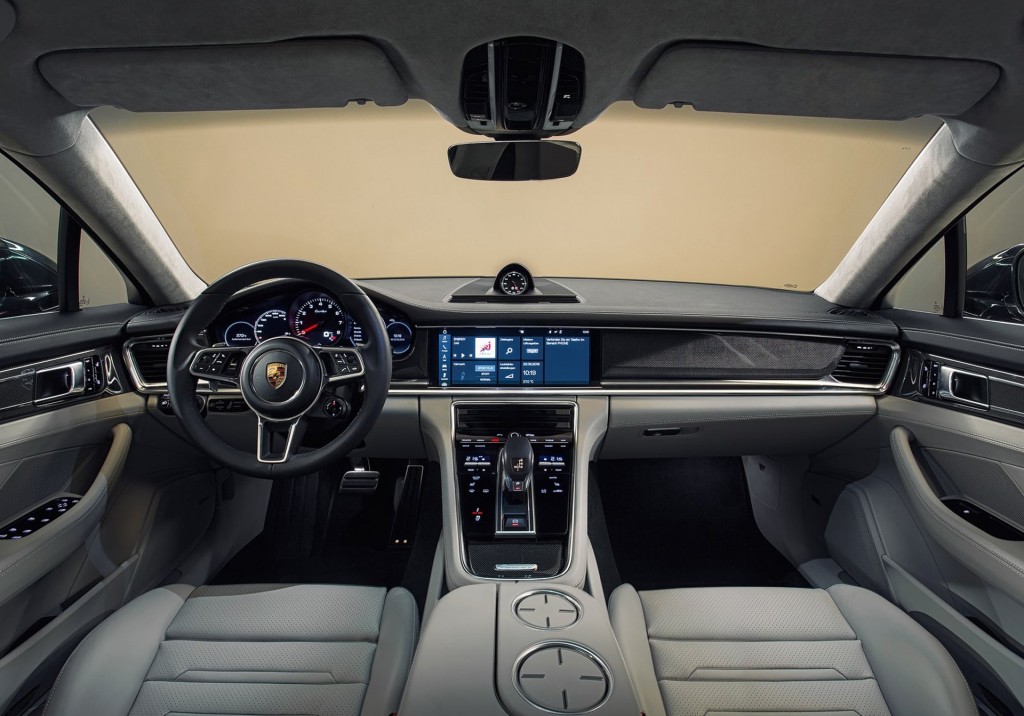 The most noticeable change for the interior of the 2017 Panamera is the new central command layout. Gone are the buckets of buttons in the last model, replaced by a new 12.3-inch configurable center touchscreen that works like a tablet. In front of the driver sit a pair of 7-inch instrument panel screens that flank a centrally located tachometer. Porsche calls it the Porsche Advanced cockpit and notes that it features far more communication, convenience, and assistance systems.

Those new assistance systems include a night vision assistant and Porsche InnoDrive, which includes adaptive cruise control. InnoDrive is an autonomous system uses navigation data and signals from radar and video sensors to compute and activate the optimal acceleration and deceleration rates, gear selections, and coasting phases for the next 1.8 miles.

In the rear, a new control unit offered with the optional four-zone climate control system has its own digital screen so passengers can control the climate system and the infotainment functions. Other interior options will include a panoramic sunroof, massaging seats, ambient lighting, and a Burmester 3D sound system.