It was another cruise to victory for Lewis Hamilton at yesterday’s 2015 Formula One Russian Grand Prix, with the win sealing the Constructors' Championship for his Mercedes AMG team for the second time in a row. But it wasn’t all good news at the Mercedes camp because Nico Rosberg suffered another bout of bad luck, with throttle issues forcing him to retire on lap seven. It means the German’s championship hopes this season are all but over.

The win for Hamilton is his ninth of the season and 42nd of his F1 career, drawing him level with Ferrari’s Sebastian Vettel in the all-time standings. Ahead of him still are Alain Prost (51) and Michael Schumacher (91).

After a thrilling performance yesterday at the Sochi Autodrom, Vettel ended up crossing the line second. In the closing stages, the German slashed a 13-second gap to just 5.9 seconds, proving the performance of his Ferrari. And the battle for third place was just as exciting. Force India’s Sergio Perez looked to be in the running for his first podium of the season but with his tires fading, Williams’ Valtteri Bottas and Ferrari’s Kimi Räikkönen were able to overtake.

There were tense moments all the way to the end, with Bottas just ahead of Räikkönen. The Ferrari driver pushed ahead with an overtaking maneuver but ended up crashing into the rear of his compatriot. It meant that Perez was able to cross the line third, almost 29 seconds behind the leader, and it also allowed Williams’ other driver Felipe Massa, who started the race at 15th on the grid, to sneak through and secure fourth. 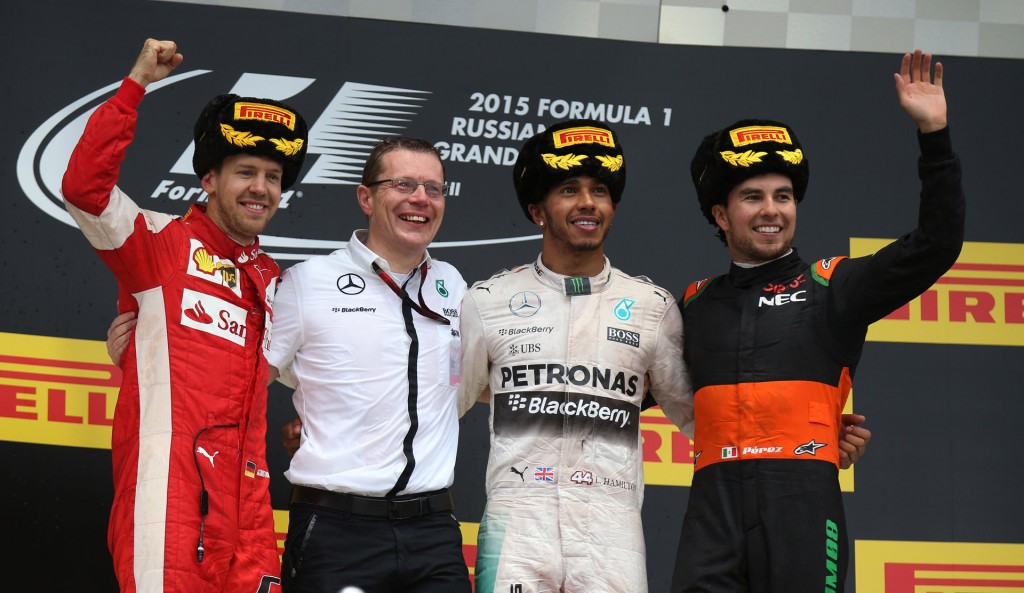 Unfortunately, the crash ended Bottas’ race though he was later classified 12th. Räikkönen went on to cross the line fifth but was later demoted to eighth place after stewards added 30 seconds to his race time. This gave the fifth spot to Infiniti Red Bull Racing’s Daniil Kvyat who was racing in front of his home crowd. Sixth, meanwhile, went to Sauber’s Felipe Nasr.

Seventh went to Lotus’ Pastor Maldonado, with Räikkönen then classified eighth. Filling out the top ten spots were McLaren’s Jenson Button in ninth and Toro Rosso’s Max Verstappen in tenth. Behind them were a string of retired drivers. At the start of the race, Force India’s Nico Hulkenberg lost control at Turn 2 and ended up crashing into Sauber’s Marcus Ericsson, with both drivers eliminated. Verstappen also suffered a puncture in his attempt to avoid the crash.

And yet another crash was suffered by Lotus’ Romain Grosjean. The Frenchman lost control at Turn 3 at slammed into a wall. Fortunately he was unhurt from the violent impact. Other drivers failing to finish included Red Bull’s Daniel Ricciardo who suffered suspension problems and Carlos Sainz who had brake problems.

The results mean Hamilton now leads the 2015 Drivers’ Championship with 302 points. Vettel is 66 points back at 236, though remains in contention as there are 100 points still up for grabs. Rosberg now drops to third with 229 points. In the Constructors’ Championship, Mercedes has received the 2015 title thanks to its unbeatable 531 points. Ferrari is second with 359 points and Williams is a distant third with 220 points. The next race on the calendar is the United States Grand Prix at Austin’s Circuit of the Americas in a fortnight.

Hit the next page to see the full results of the 2015 Formula One Russian Grand Prix.

Below are the full results for the 2015 Formula One Russian Grand Prix: