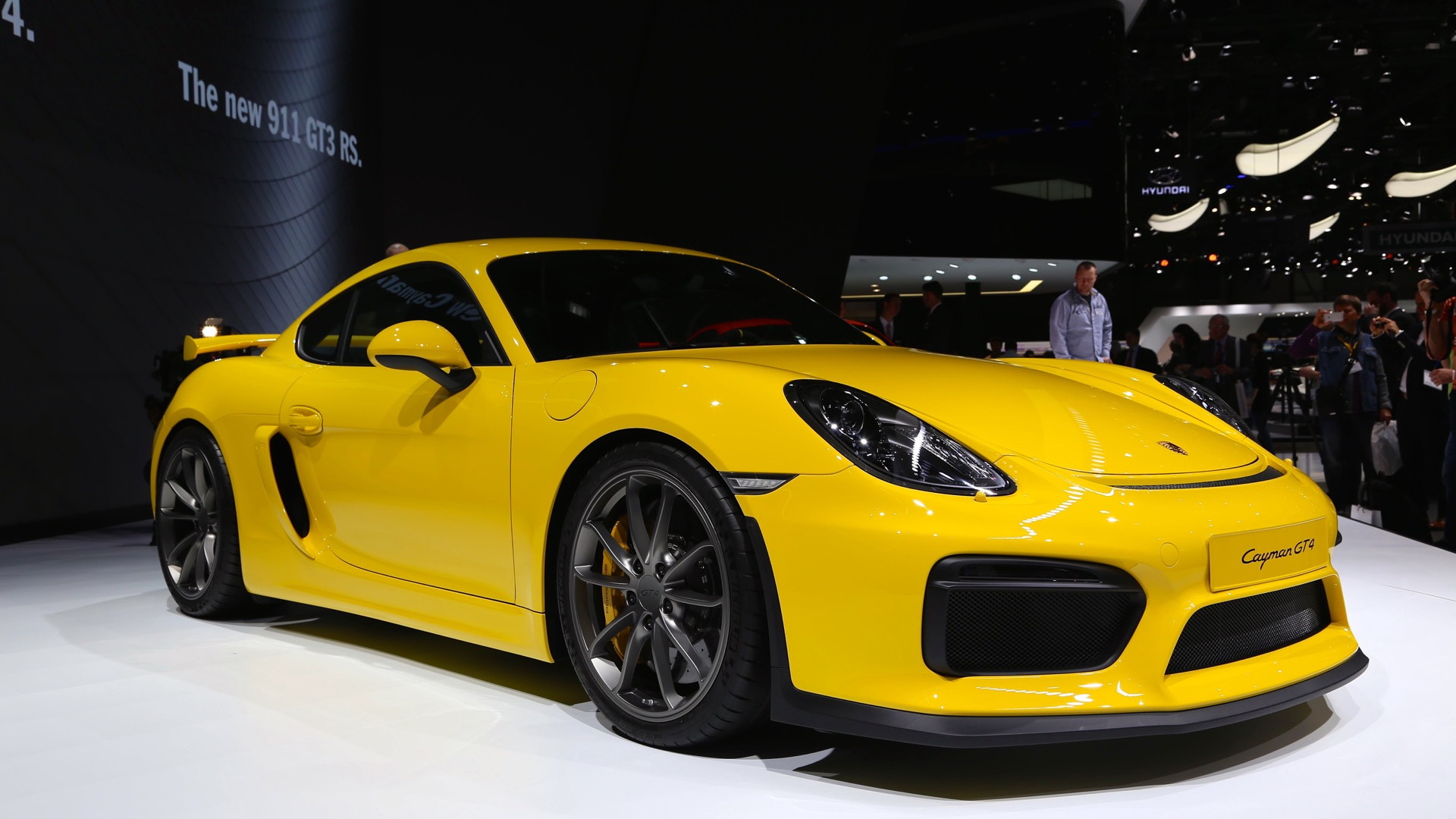 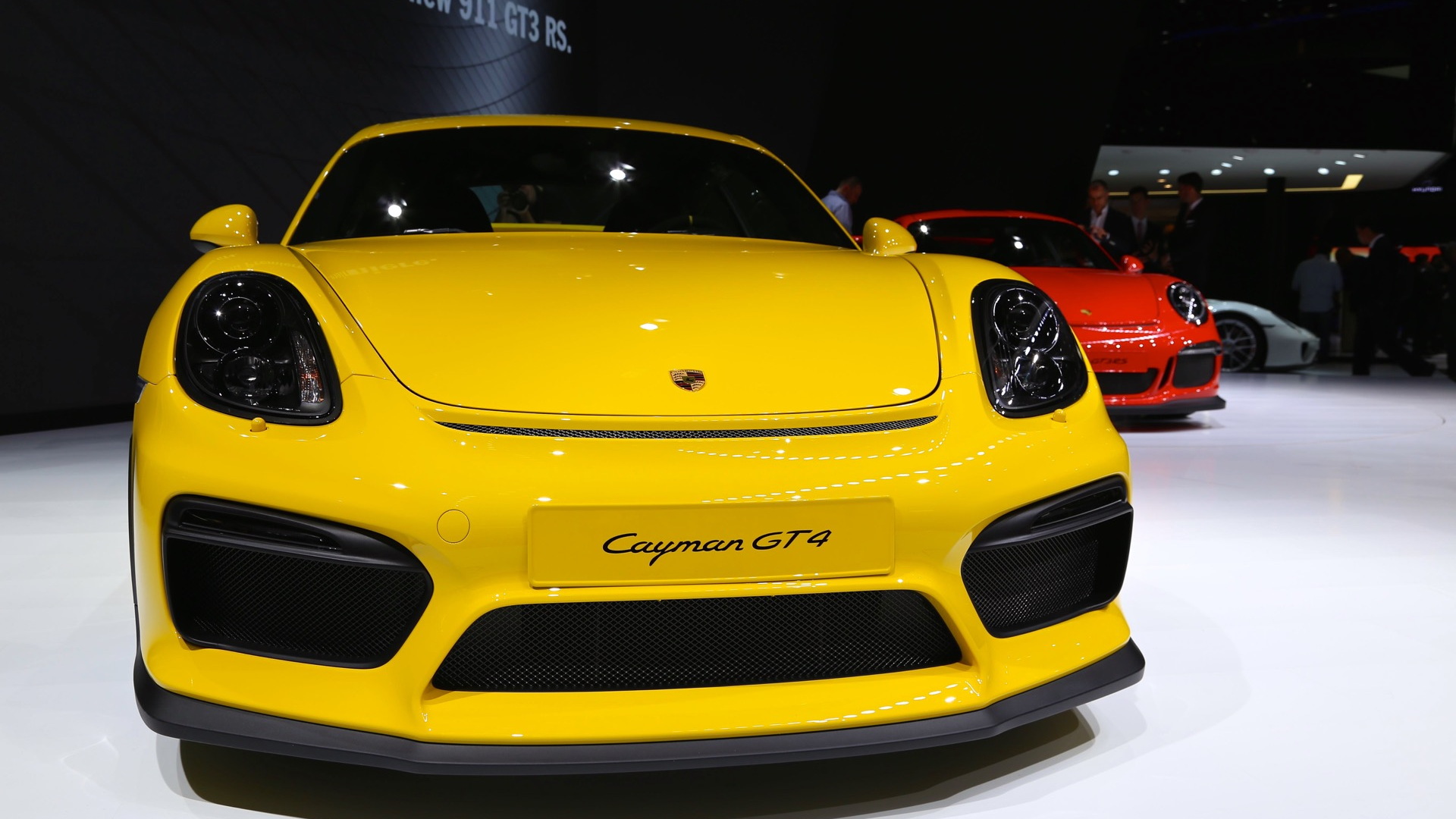 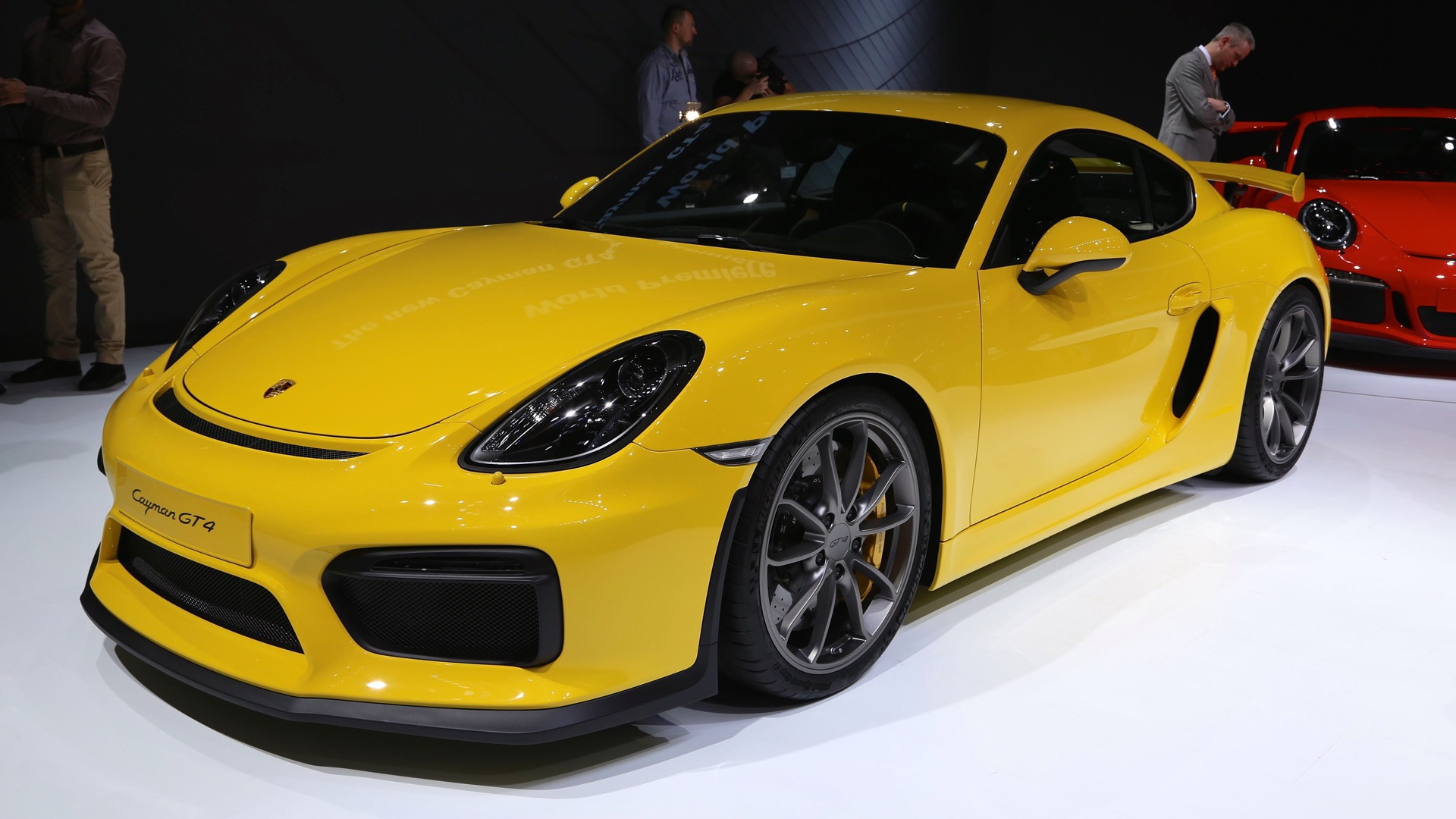 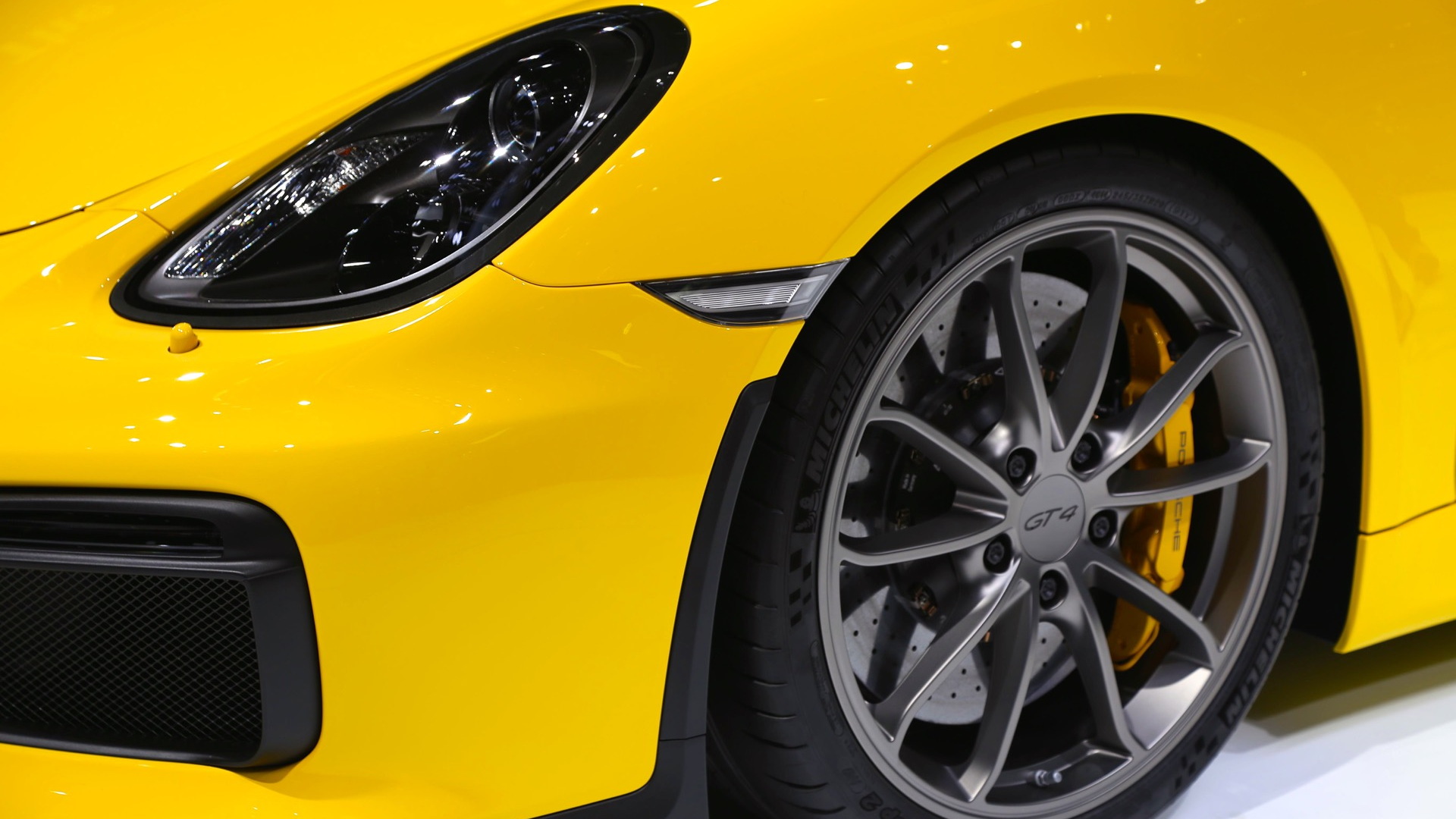 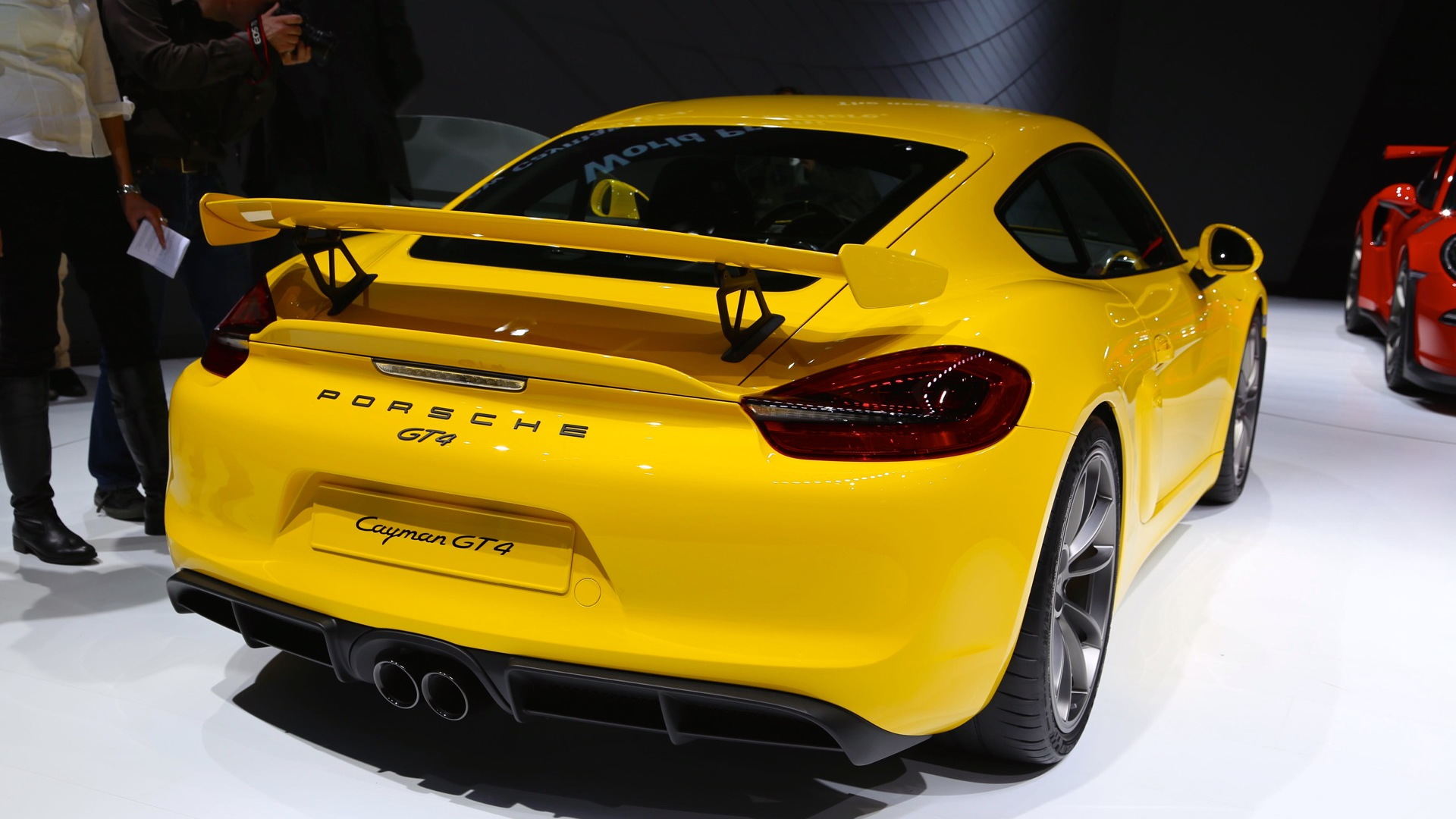 The Cayman GT4, a car best described as a mini-911 GT3 but with a six-speed, three-pedal manual instead of a dual-clutch job, is here, and it's on display at the Geneva Motor Show. And yes, you read that right—Porsche’s latest road racer comes with a conventional manual, but many of its upgrades are lifted straight off the 911 GT3 parts shelf.

Power in the car comes from a 3.8-liter flat-fix, mid-mounted and turned to deliver 385 horsepower. Drive goes to the rear wheels via the aforementioned six-speed manual, which gets dynamic gearbox mounts to minimize the oscillations and vibrations of the entire drivetrain. The latter is usually available as part of Porsche’s Sport Chrono Package.

To aid the handling, the suspension has been lowered by 30 millimeters compared to the already-low stock model, and the some new body additions help produce significantly more downforce. These include three pronounced inlet openings at the front and a large fixed rear wing.

Should you want to make your Cayman GT4 even more extreme, Porsche offers a long list of options including carbon ceramic brakes, carbon fiber-backed sport bucket seats, and a custom Sport Chrono Package featuring a app designed for honing your track skills.

Moving inside, the cabin of the Cayman GT4 is dressed with leather and Alcantara trim, a sports steering wheel and contrast stitching.

While the new Cayman GT4 has been designed for both the road and track, a version of the car built purely for motorsport use is also in the works. Porsche Motorsport chief Hartmut Kristen has previously revealed that the automaker has tested a racing version of the Cayman and that it was part of a plan to introduce a race car below the 911-series of cars, like a GT4-spec car.

The Porsche Cayman GT4 made its world debut on March 3 at the Geneva Motor Show. This car will hit showrooms in July of this year, most likely as a 2016 model. Pricing has been confirmed to start at $85,595, which includes a $995 destination charge. For more Geneva Motor Show coverage, head to our dedicated hub.