Tesla Motors [NSDQ:TSLA] CEO Elon Musk isn't shy about speaking his mind, and he did just that on the home turf of the Big Three U.S. automakers—at the 2015 Detroit Auto Show. After the conclusion of press days, Musk spoke for more than an hour at the Automotive News World Congress on topics ranging from Tesla's current challenges to criticism of other automakers' green-car strategies.

Some analysts believe the current low gas prices will hurt sales of the Model S electric sedan. Tesla sales in China have also been low (although we don't know how low, because Tesla doesn't release sales figures) even though Musk is putting a lot of emphasis on that market.

Musk is undeterred though, he doesn't expect cheap gas to affect Tesla sales in the U.S. and claims the China slump is due to customers overestimating the difficulty of installing charging equipment. He said that "miscommunication" had been corrected. 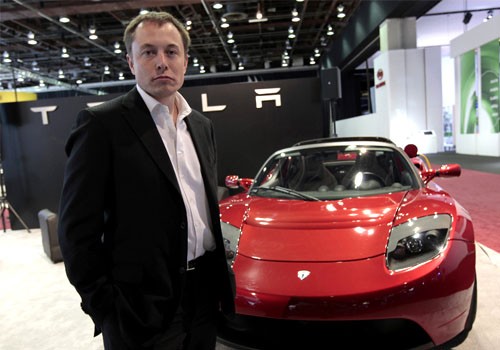 In fact, he said Tesla will try to outperform its original its original goal of selling 500,000 cars by 2020.

As time goes on, Tesla will face more competition from established automakers. One of the biggest reveals at the Detroit Auto Show was the Chevrolet Bolt—an electric concept with 200 miles of range and an estimated price tag of around $30,000.

That seems to target Tesla's upcoming Model 3, which is supposed to offer similar range for around $35,000 when it launches in 2017. However, Musk noted that the Bolt's estimated price includes the $7,500 federal tax credit for electric cars, while the Model 3 price estimate does not.

Tesla is also fighting auto-dealer groups, who have worked to outlaw its direct-sales scheme in several states, including Michigan. Musk struck a conciliatory tone, saying he would try to work with dealers more in the future. However, when asked if Tesla would consider opening a factory in the Detroit area, he quipped "maybe if they let me sell my cars here."

Musk noted that he plans to remain CEO of Tesla at least through the launch of the Model 3, so expect plenty more snappy quotes in the coming years.