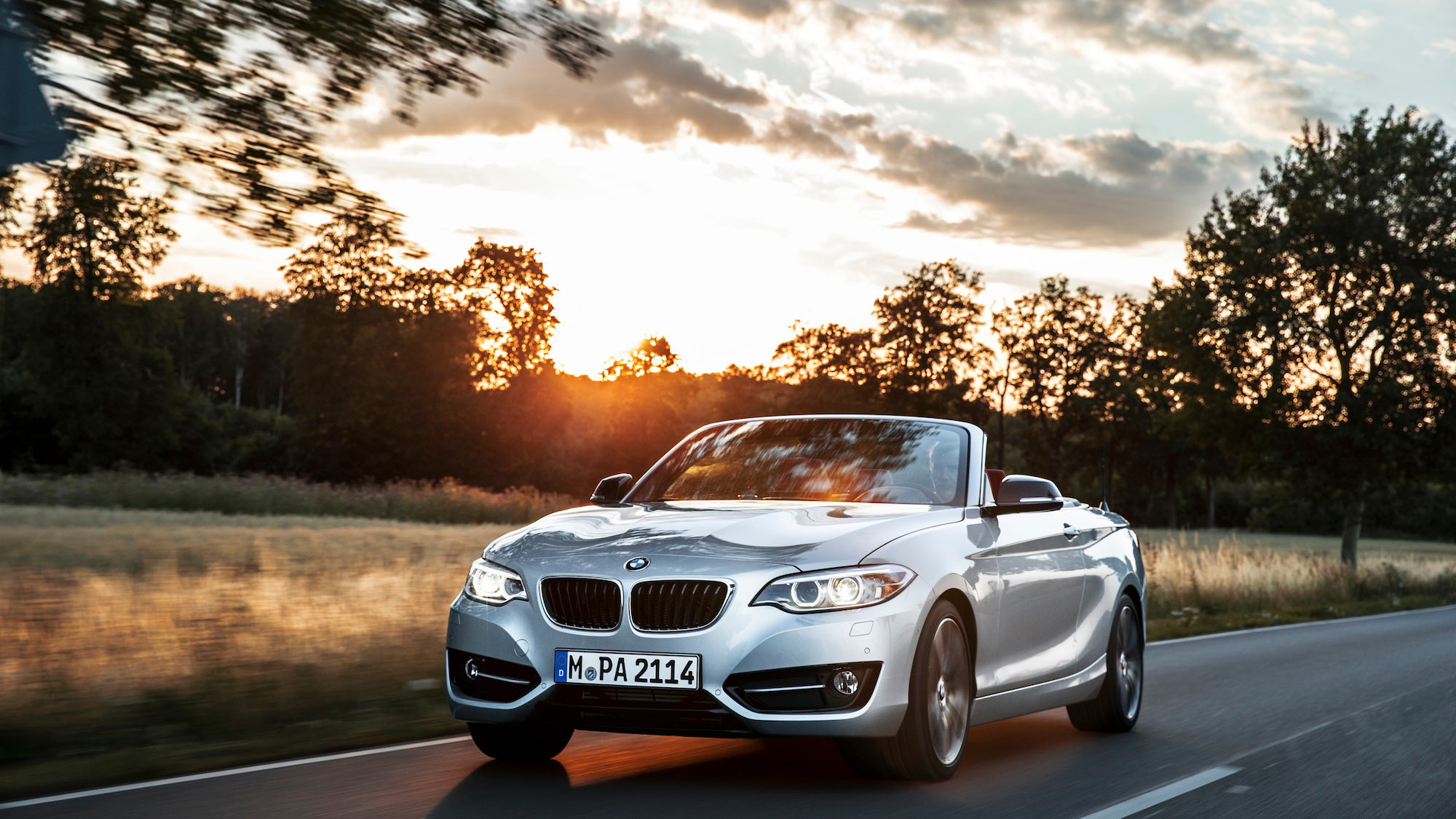 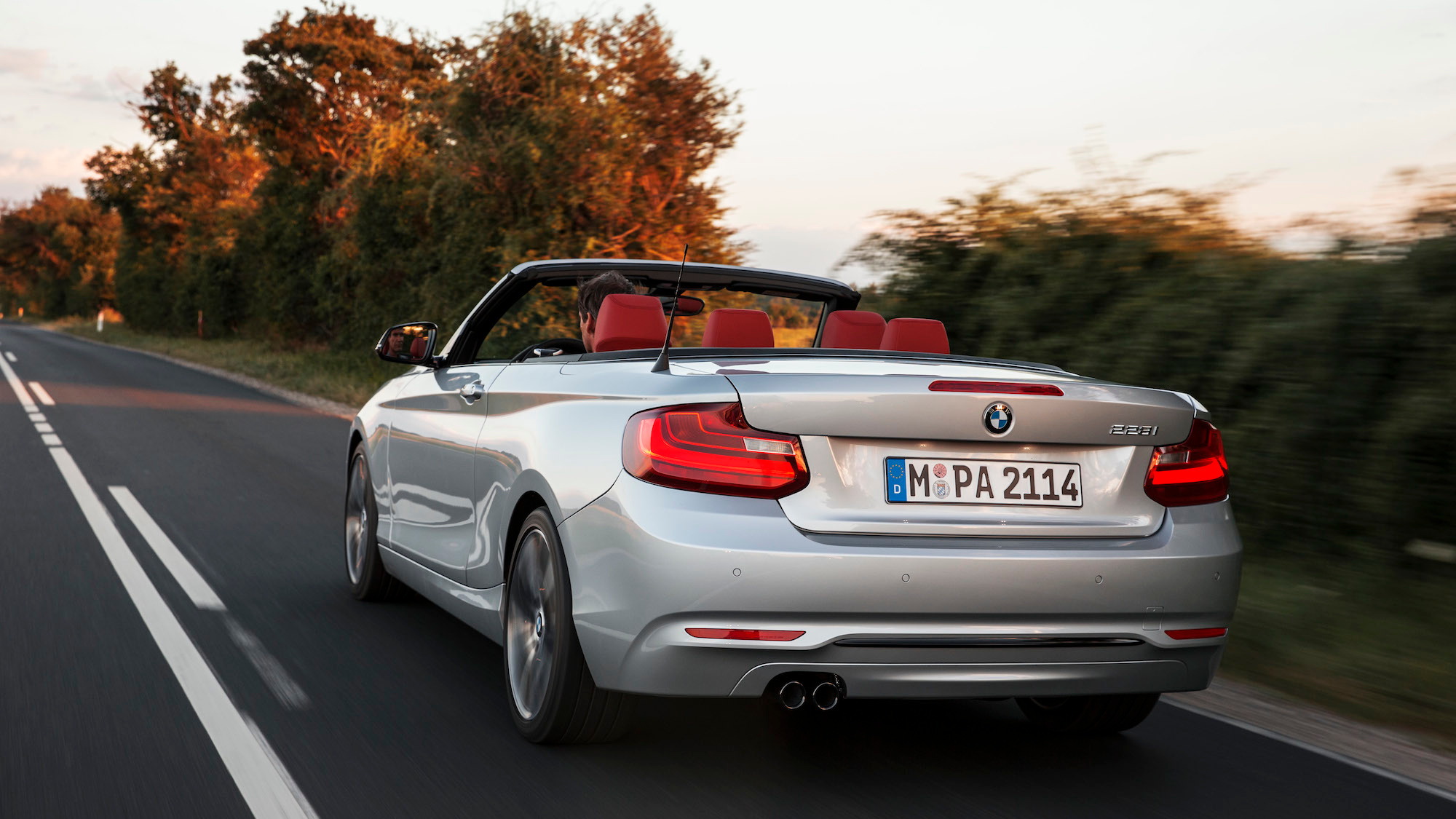 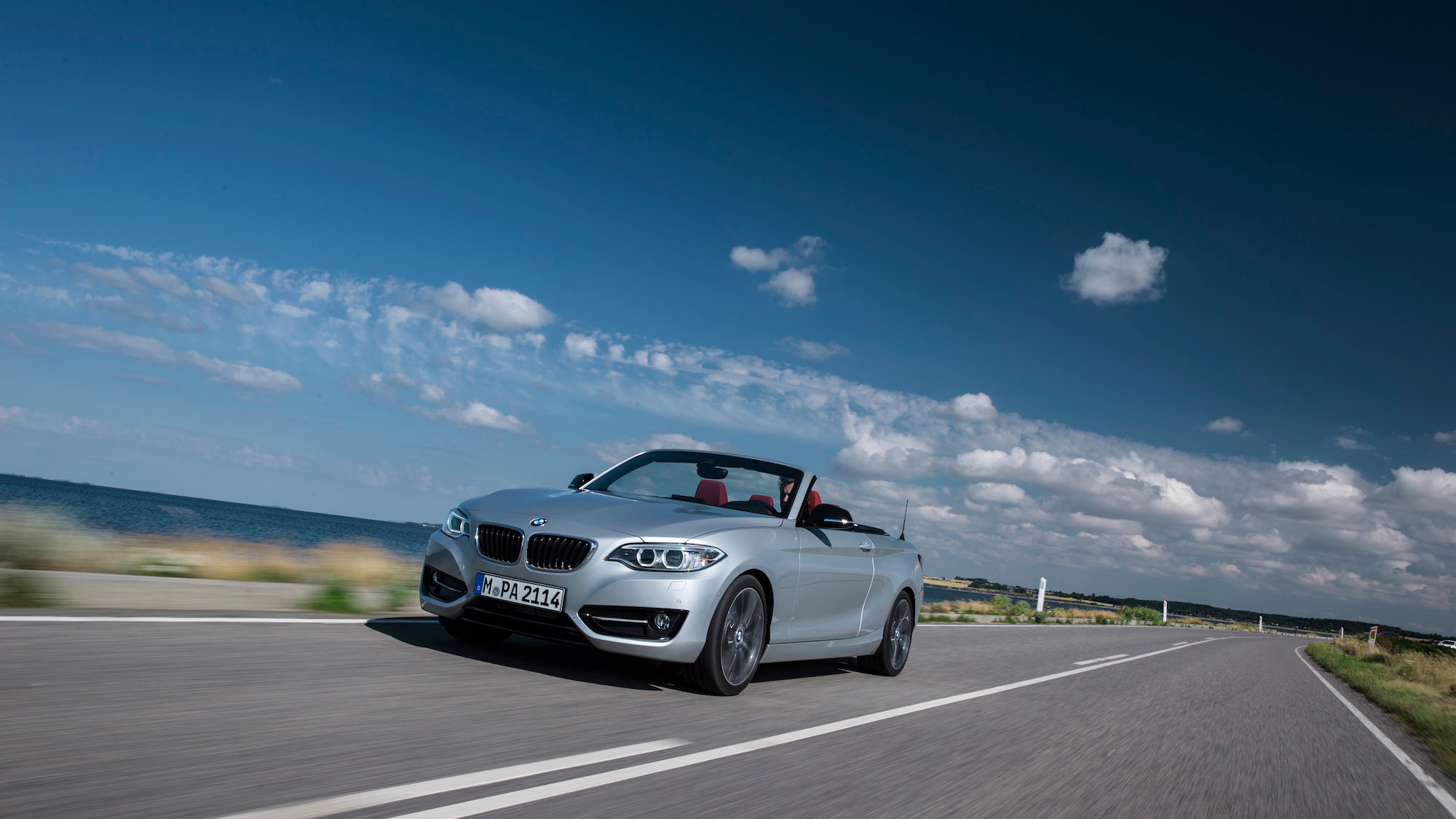 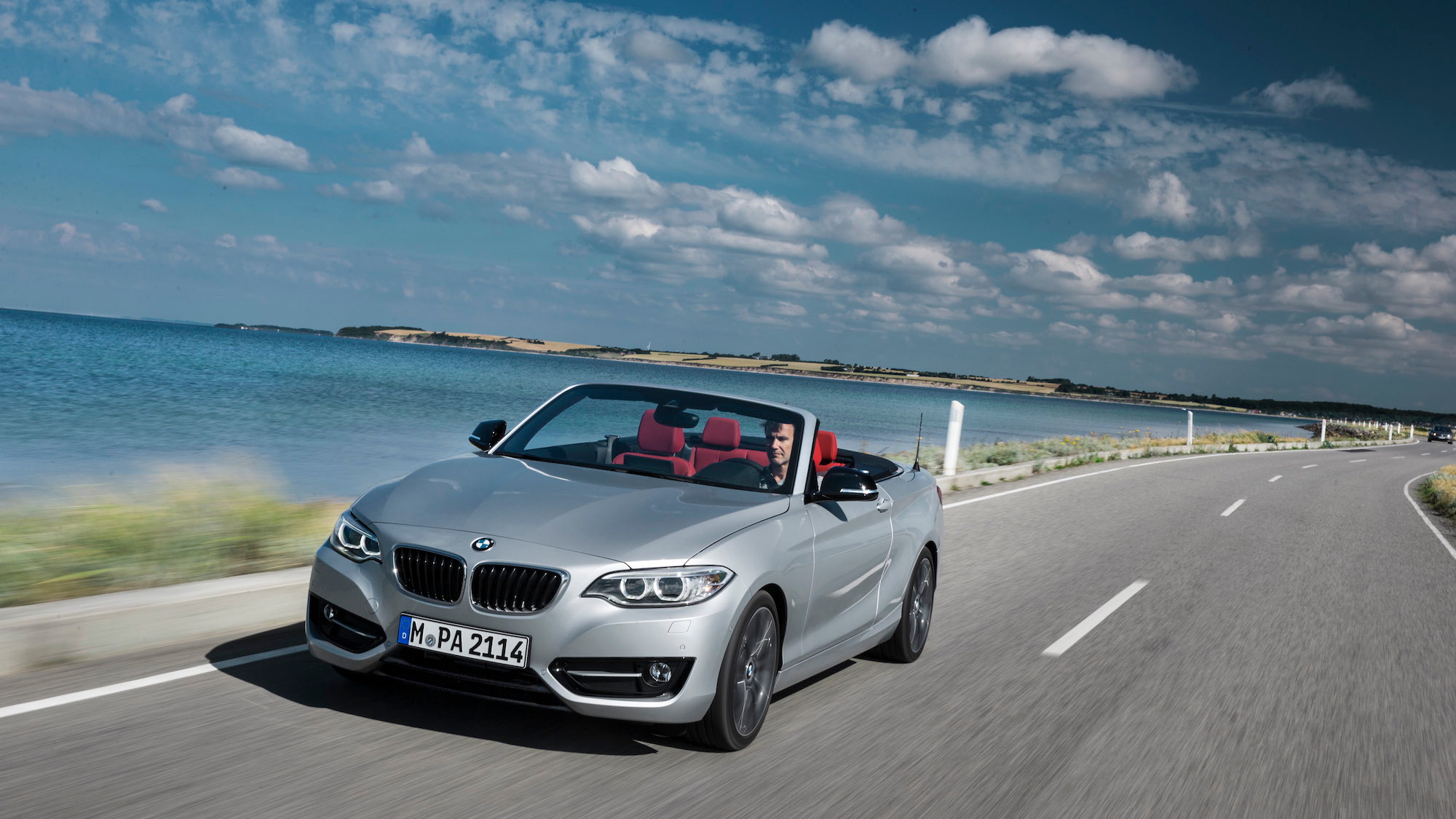 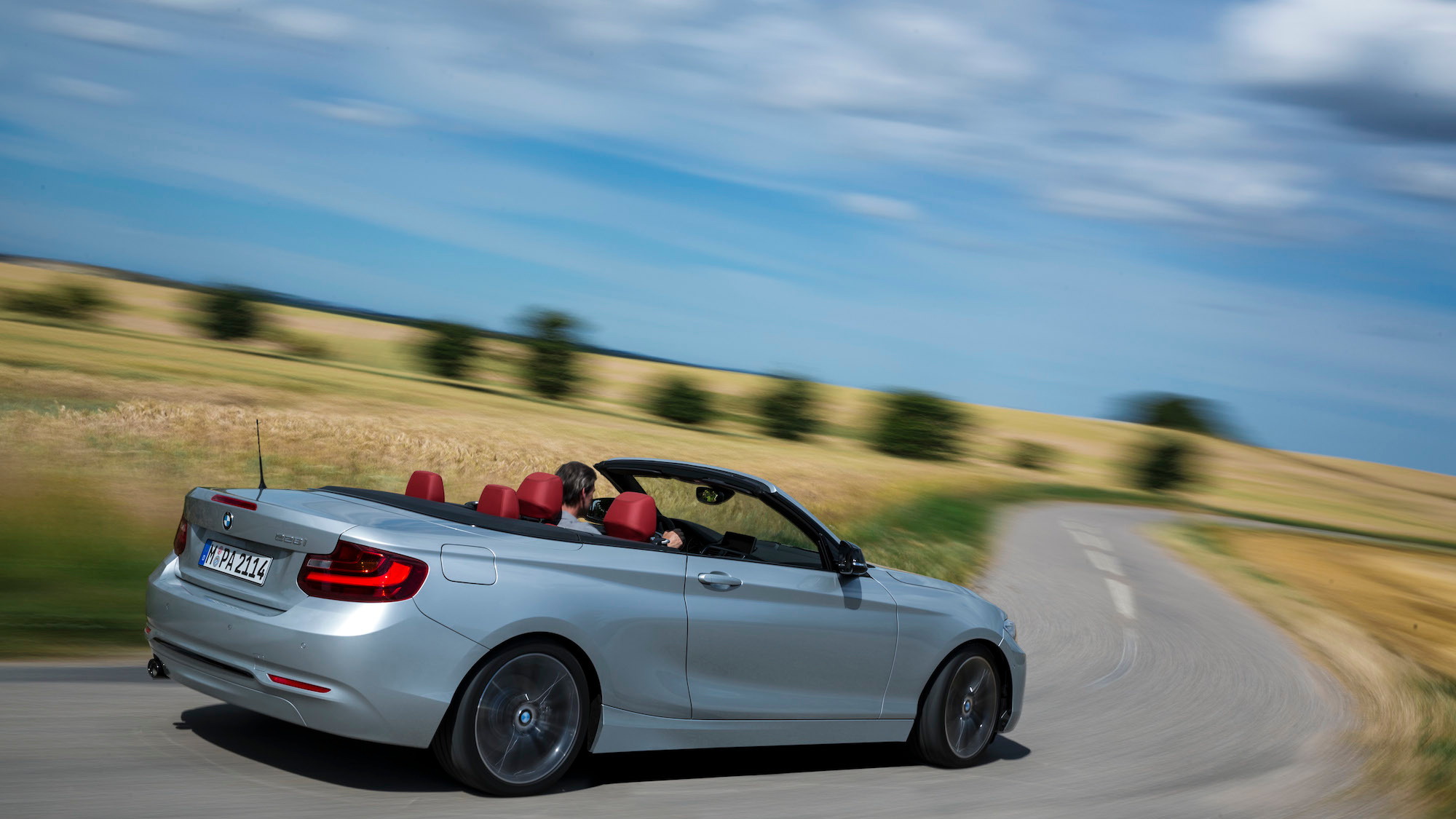 71
photos
On a day that has already brought us the iPhone 6 and 6 Plus, the Apple Watch, and, more to the car enthusiast’s tastes, the Mercedes-AMG GT, we’re faced with an embarrassment of riches. Now, BMW adds its 2-Series Convertible to the treasure chest.

It’s easy to be fond of the 2-Series coupe, particularly the M235i. It’s a fun-driving, comfortable, surprisingly practical little luxury coupe. But what if you want all of that, and to horse around with the top down? Here’s your answer.

As you might also expect, those model names represent a car that is, aside from the soft top, essentially identical to the coupe. With the 2-Series Convertible, the focus is on the design and the experience; the performance outlines have already been drawn.

Specs for the new 2-Series Convertible range are familiar. The 228i rates 240 hp and 255 lb-ft of torque from its 2.0-liter turbocharged four-cylinder. Zero to 60 mph acceleration occurs in just 5.7 seconds. An eight-speed automatic transmission is standard equipment.

All-wheel drive will be available from launch in the 228i Convertible, cutting 0-60 mph times to 5.6 seconds. The standard torque split for the xDrive system is 70% rear, 30% front, with the computer making electronic adjustments to that spread as required by the conditions.

The car’s soft top is made of fabric, and can open or close in 20 seconds, at speeds up to 30 mph. An optional Comfort Access option allows the roof to be opened or closed remotely, as well.

Black is the standard color for the soft top, but two additional colors are available: Anthracite with silver effect, and Brown with silver effect. What’s the silver effect part of that? The tops are woven with shiny fibers in the mix, giving a “shimmering metallic surface impression,” according to BMW.

The new 2-Series Convertible doesn’t exist in a vacuum, of course; it follows on the heels of the previous 1-Series Convertible. Compared to the former compact luxury convertible, the new 2-Series version expands cabin space and cargo room. Rear seat access is now 0.4 inches larger, and the trunk load area at the rear is 1.4 inches wider. The passthrough from the trunk to the rear passenger area (accessible with the seats folded down) is now 5.9 inches wider and 1.1 inches taller. The result? Room for two 46-inch golf bags, or, “a pair of snowboards,” says BMW.

Among other new features in the 2-Series Convertible, BMW plans to offer the first over-the-air updates to its navigation data as part of the BMW ConnectedDrive system. Regular updates to the maps should enable the navigation to better represent current road conditions in areas where construction is prevalent, as well as business and location info.

The 2015 BMW 2-Series Convertible will make its North American debut at the 2014 Los Angeles Auto Show.