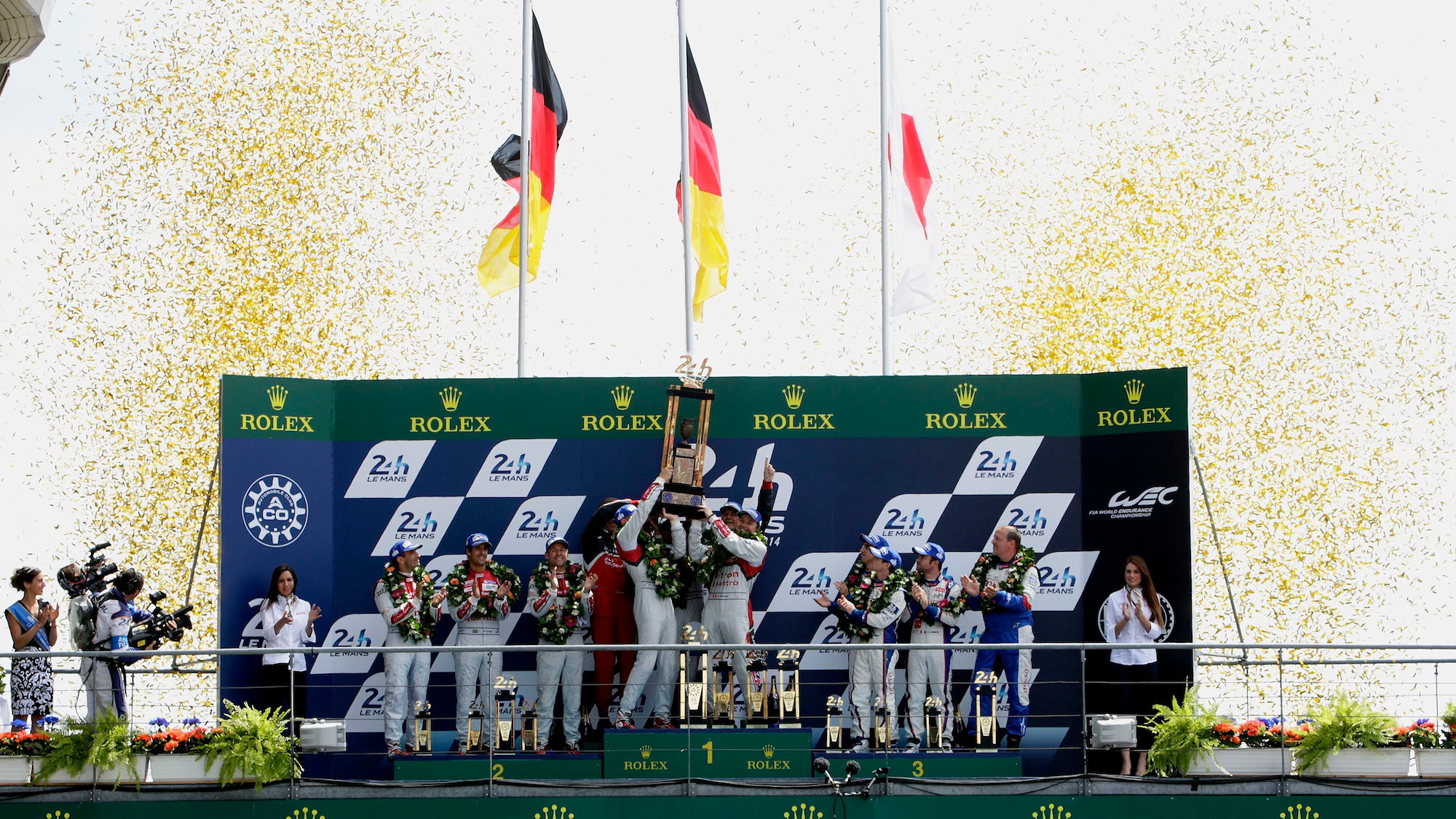 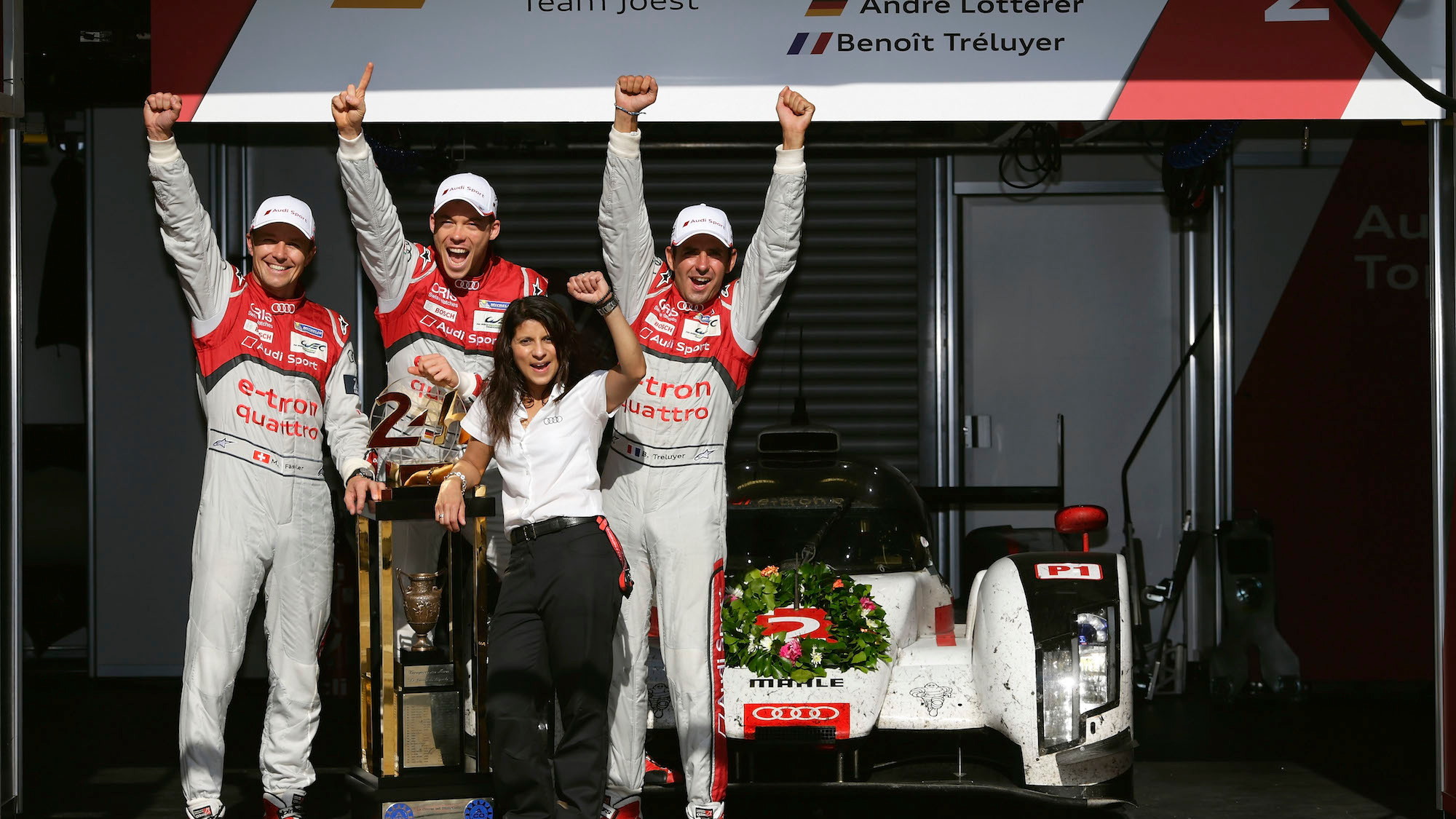 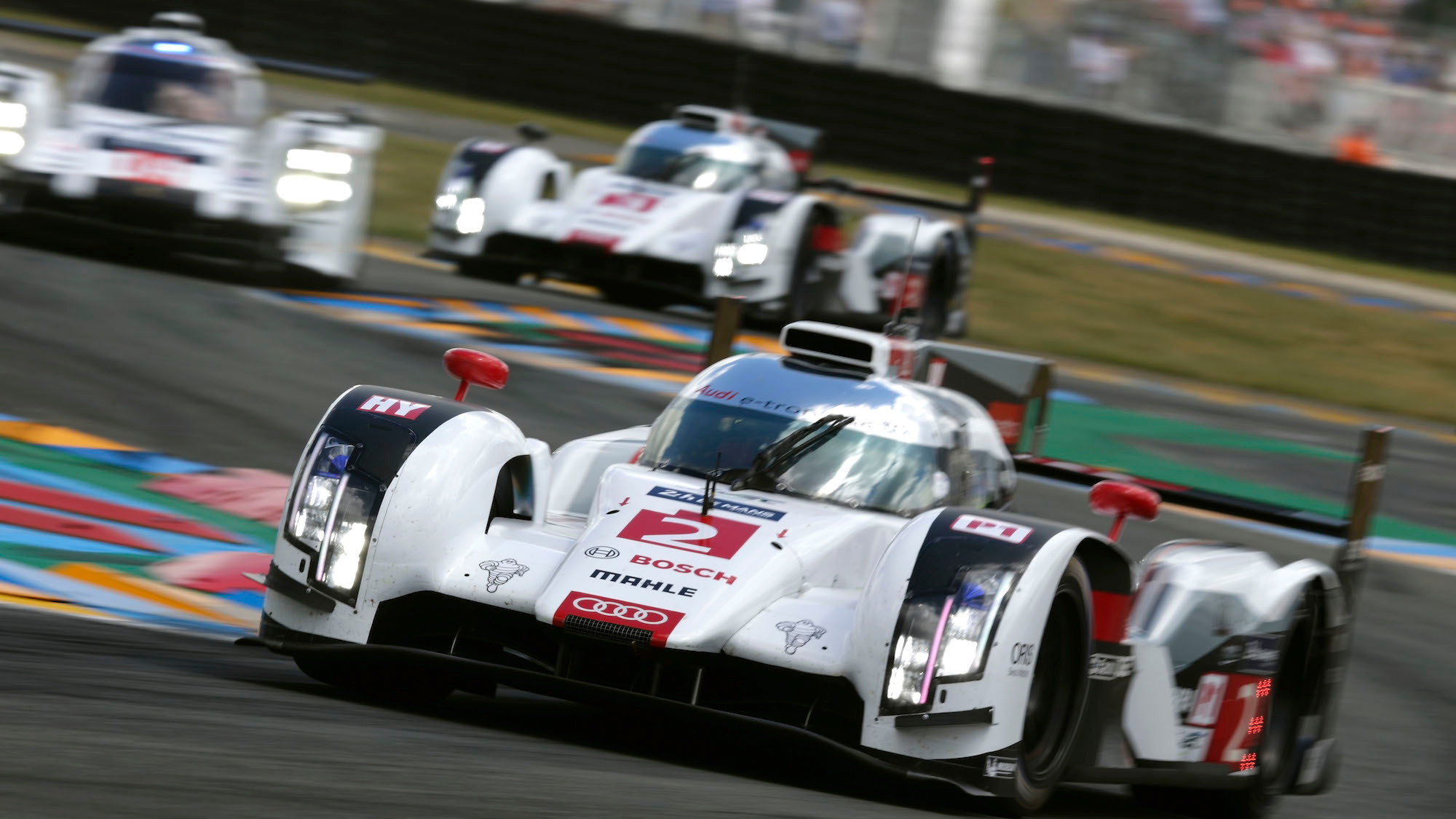 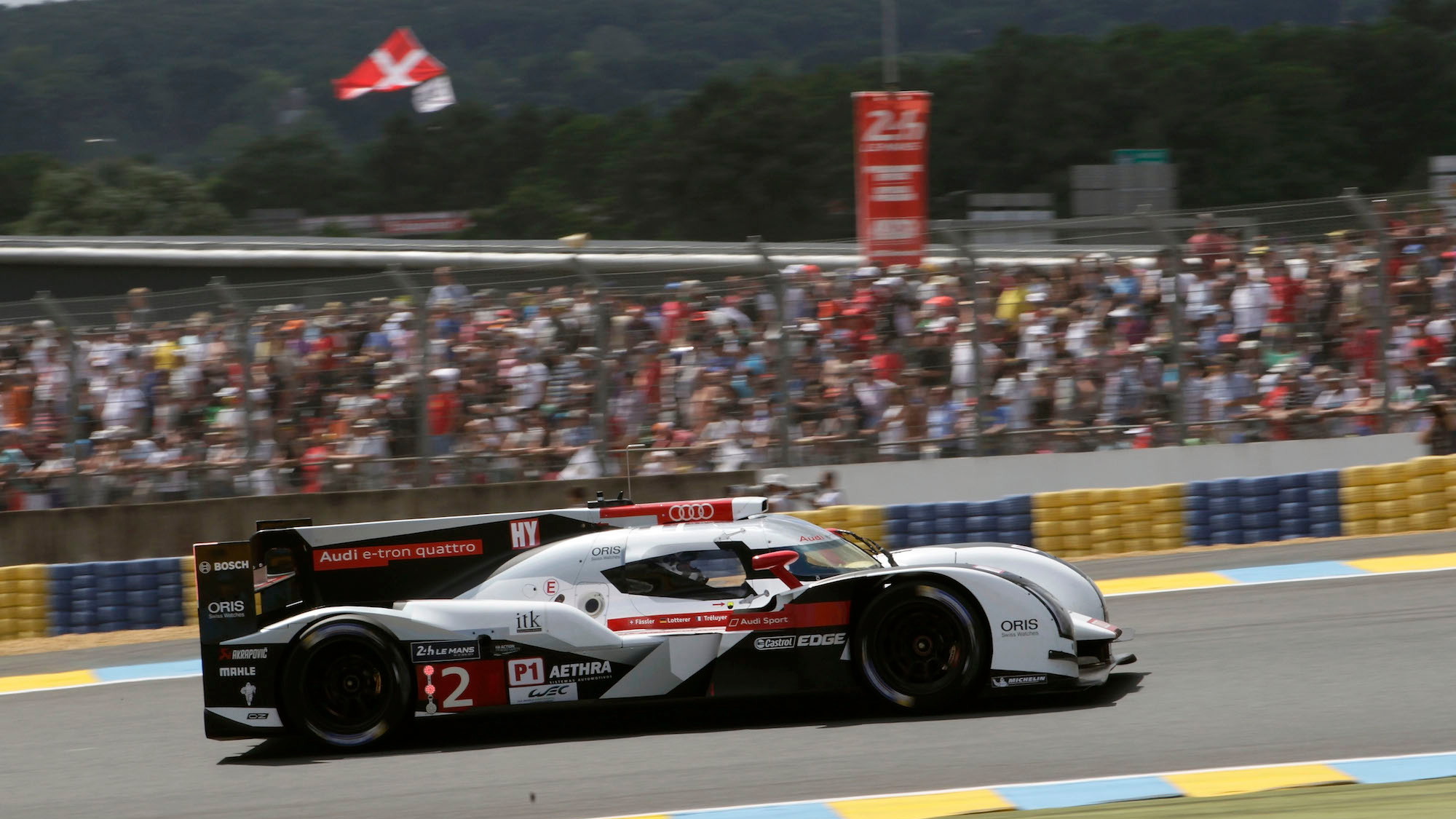 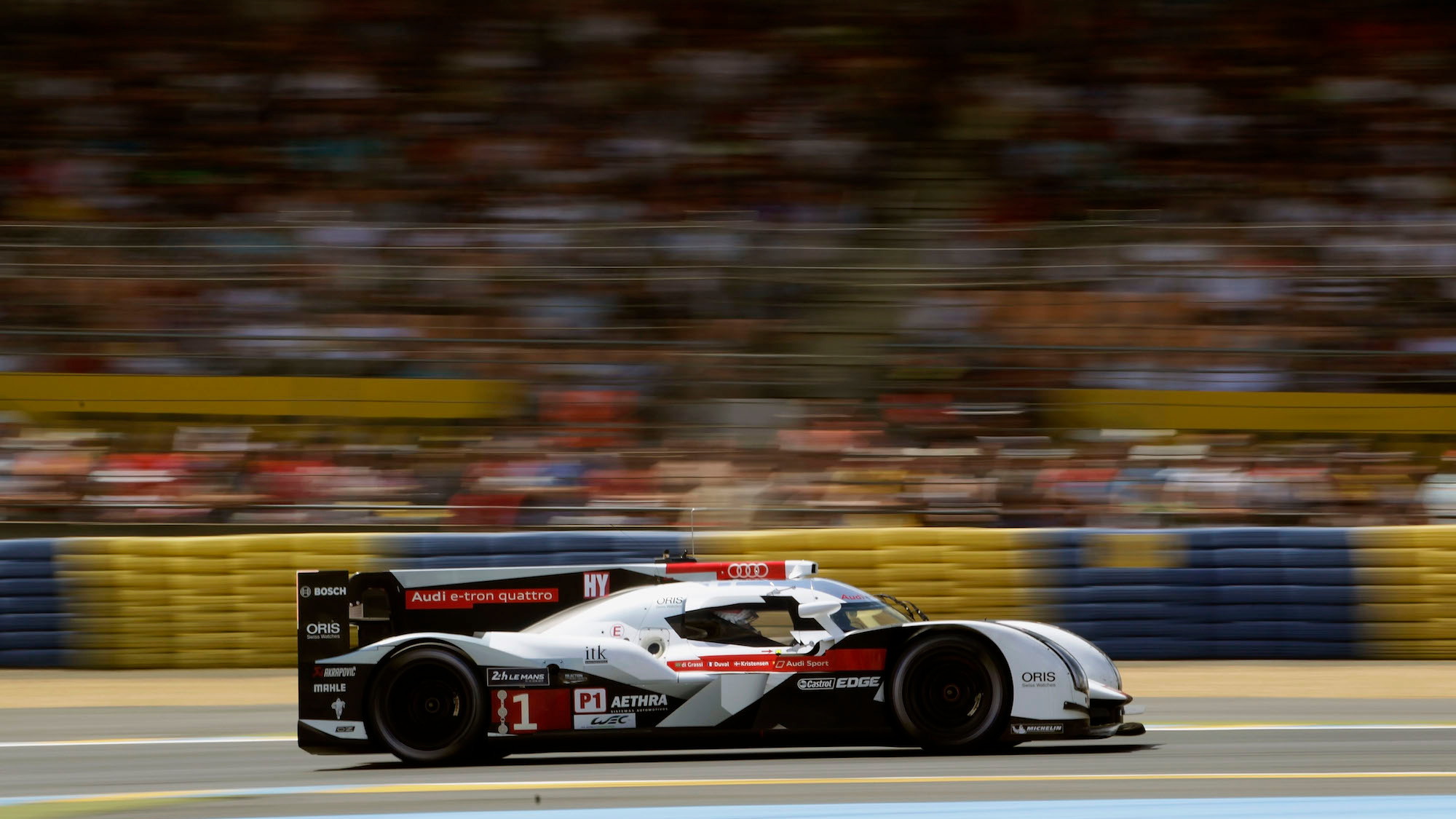 Intra-group rival Porsche has more overall wins (16), but it hasn’t made those wins over such a short period of time—and it failed to bring either car to the full race distance this year, facing off against Audi and Toyota.

Given the horrific crash suffered by the #1 R18 e-tron quattro in qualifying with Loic Duval behind the wheel, and the early retirement of the #3 car, it would have been easy for Audi to simply throw up its collective hands and say, “This is not our year.” But that didn’t happen.

As Dr. Wolfgang Ullrich, head of Audi Motorsport, put it after the race, “This was no doubt one of the most thrilling and action-packed races at Le Mans. For us, it was also one of the most difficult ones and that’s why, in my personal ranking of emotions, it takes one of the top spots. The whole week was a period of many highs and lows for us. And during the 24 hours every car was running in front at least once. In the first two thirds of the race, it was our rivals and in the final third we worked our way towards the front. This can only be achieved with a very special team performance. The combination of an efficient concept and a team of strong drivers, who extract the best from it – that was the key to success.”

Even toward the end of the race, as competitors fell or had already fallen to mechanical issues, Audi continued stepping up the pace—particularly Andre Lotterer, one of the drivers of the winning #2 R18 e-tron quattro. Lotterer  lowered the fastest race lap time twice—on laps 299 and 317 of the 379-lap race.

“This was a fantastic day for us following some very stressful weeks for the whole Audi squad.  The race started well and the spectators saw a great battle between all three manufacturers,” said Lotterer. “When an Audi retired, we chased Toyota as a duo. After our rivals had a problem, the way seemed to be clear. Then we had a problem. But our mechanics never lost their motivation and very quickly changed the turbocharger. They know Le Mans and what needs to be done.”

Another standout performance on the Audi team came from Marc Gené, who had arrived in Le Mans expected to race an LMP2 car, but was called up as the reserve driver after Duval’s crash. Despite being mentally prepared for a very different task, Gené stepped up to the challenge, turning in very fast laps and helping to bring the #1 R18 e-tron quattro to the second step of the podium.

“When I arrived at Le Mans I had victory in the LMP2 category in the back of my mind,” said Gené. “But with all due respect: a podium place in the LMP1 class is obviously a lot more overwhelming. Everything came as such a surprise for me. And of course I also spent some thought on whether my performance was right. But Tom (Kristensen), Lucas (di Grassi) and the whole team gave me great help. Even victory would have been possible for us. But I’m overjoyed with this result as well.”

Audi celebrated back in the U.S. with an array of shipping containers holding LED-headlight-cars displaying the “lucky number 13.”

It wasn’t all smiles in the Audi garages after the race, however, as the drivers of the retired #3 car fought with disappointment after the abrupt and unexpected end to their effort.

As driver Oliver Jarvis put it, “I’m incredibly disappointed. Not just for me but, most of all, for the whole squad. Many people only see these days here at Le Mans – but preparations that last nearly a whole year are behind this event. I’m sure that today we’d have had a chance for victory too – that makes the retirement through no fault of our own an especially bitter pill following such a strong performance by Marco (Bonanomi).”

Bonanomi elaborated, saying, “I feel incredibly sorry, especially for my two team-mates and the whole squad. Everybody gave everything for success for a whole year during the preparation – and now it was over for us so early. We had the potential to clinch a really good result. I had no chance in the accident. I drove slowly in the heavy rain in order to take no risk on slicks. The situation with the Toyota turned out okay but then the Ferrari drove into my car–that meant the end of my race and unfortunately also for our Audi.”

Nonetheless, Audi continues to write its name in the history books, drawing ever closer to becoming the winningest manufacturer at Le Mans. There are still some records to shoot for, however: Porsche has the most consecutive wins (a string of 7 wins from 1981-1987) and Ferrari is second with six (1960-1965); Audi has two strings of five consecutive wins (2004-2008; 2010-2014), and has the chance to keep extending that second streak. If it can, it will become not only the manufacturer with the most consecutive wins, but also the most overall wins at Le Mans—if it can keep winning through 2017, even as Nissan and possibly Ferrari join the P1 grid.

How’s that for a #welcomechallenge, Audi?