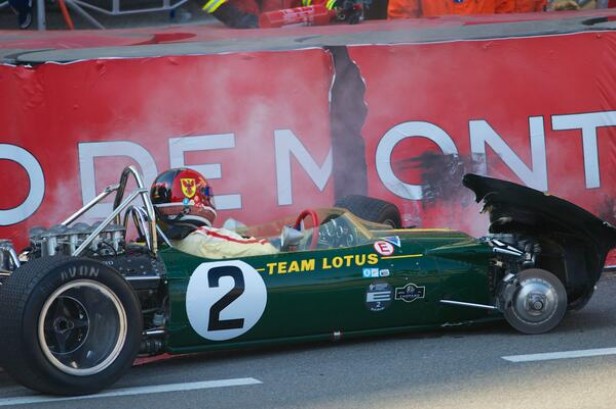 Racing used to be a very different sort of sport, even at the highest levels. The pros in Formula 1 didn’t just drive F1 races—they often moonlighted in Formula 2 or other series, both for fun and profit. That’s how Jim Clark, one of the most legendary drivers of all time, met his untimely end—in an F2 race on the Hockenheimring in a Lotus 48 in 1968.

Before his fatal crash, Clark was dominant in F1 and elsewhere, scoring 33 poles, 25 wins, and two driver's championships in just 72 F1 championship starts. Clark’s legacy has made him famous among racing circles to this day, and the cars he drove are, accordingly, coveted by collectors and vintage racers.

So when a Jim Clark race car crashes, it’s a big deal. That’s what happened at Monaco this weekend. Jim Clark’s Lotus 49, the first car to use the Cosworth DFV V-8 engine (itself a racing icon), converged violently with a wall during a race.

As tweeted by Axis of Oversteer, the Lotus 49 was wheeling its way around the circuit at Monaco when a front wheel detached, causing the driver to lose control. The problem? the wheel wasn’t properly torqued. The man at the wheel, Chris MacAllister, was unhurt, fortunately.

Also fortunately, the crash damage does not appear to be catastrophic, so with some careful restoration work (and a load of cash) the car should be back to its former glory, ready to live out its purpose on the track once again.