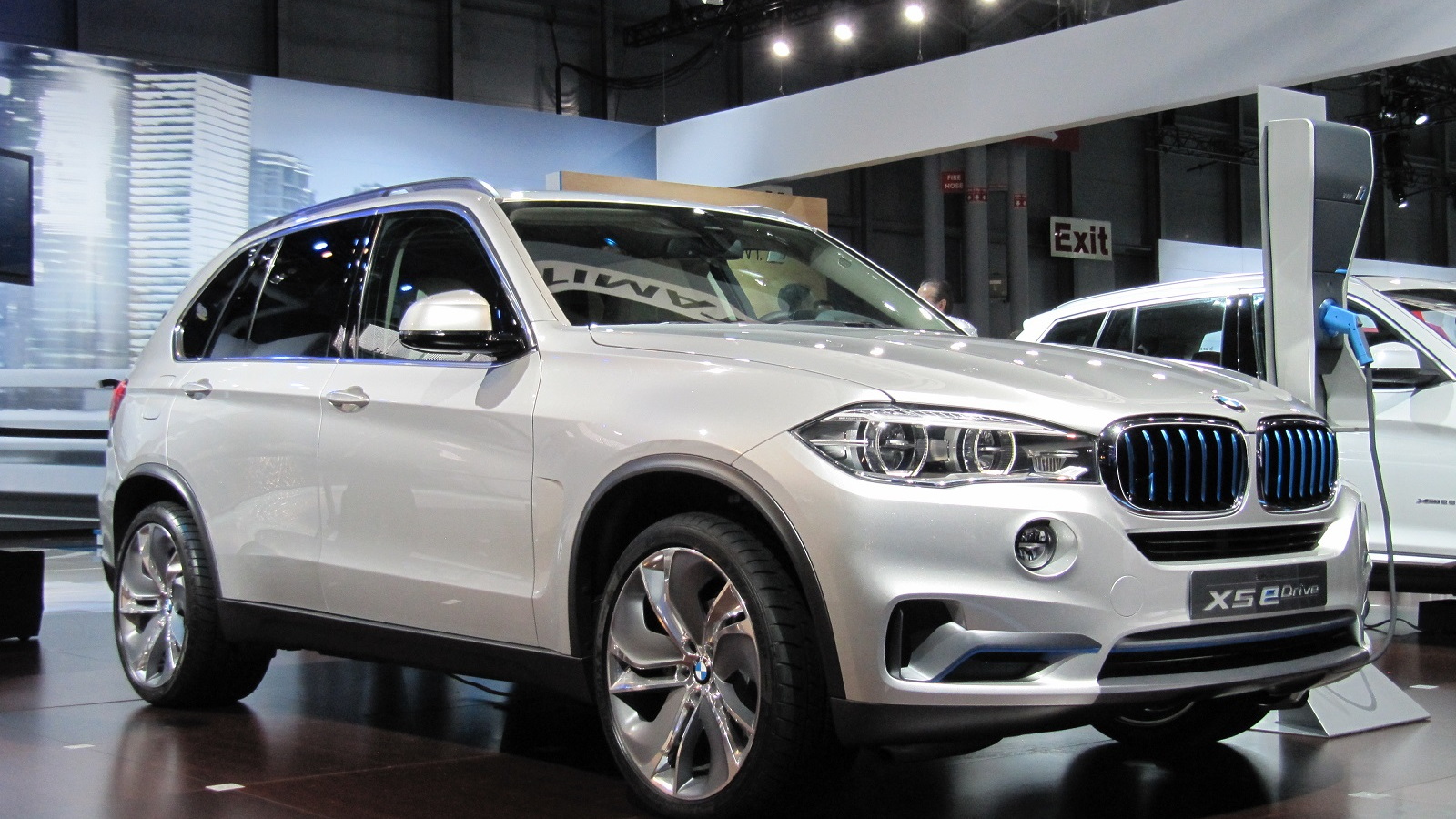 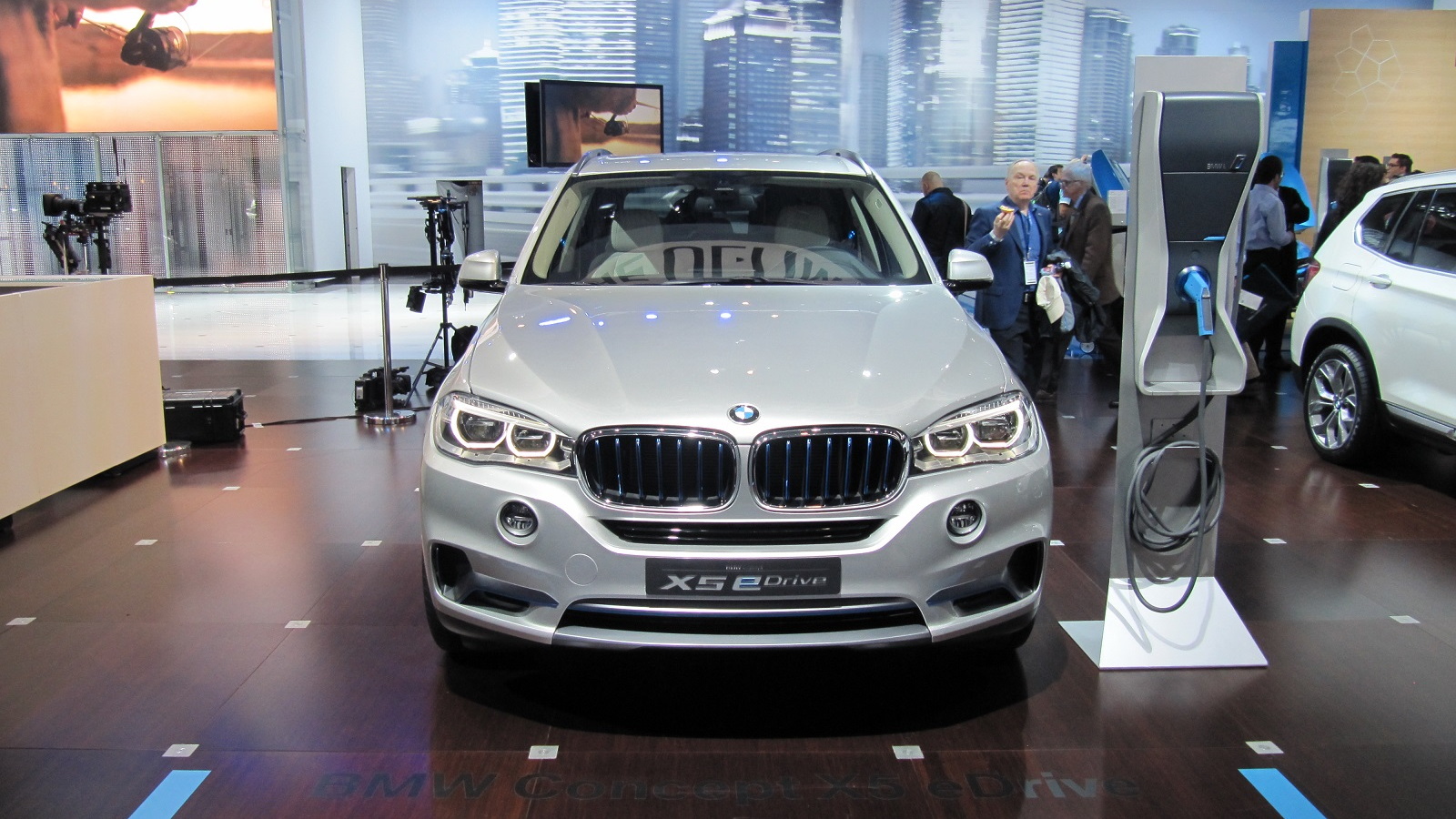 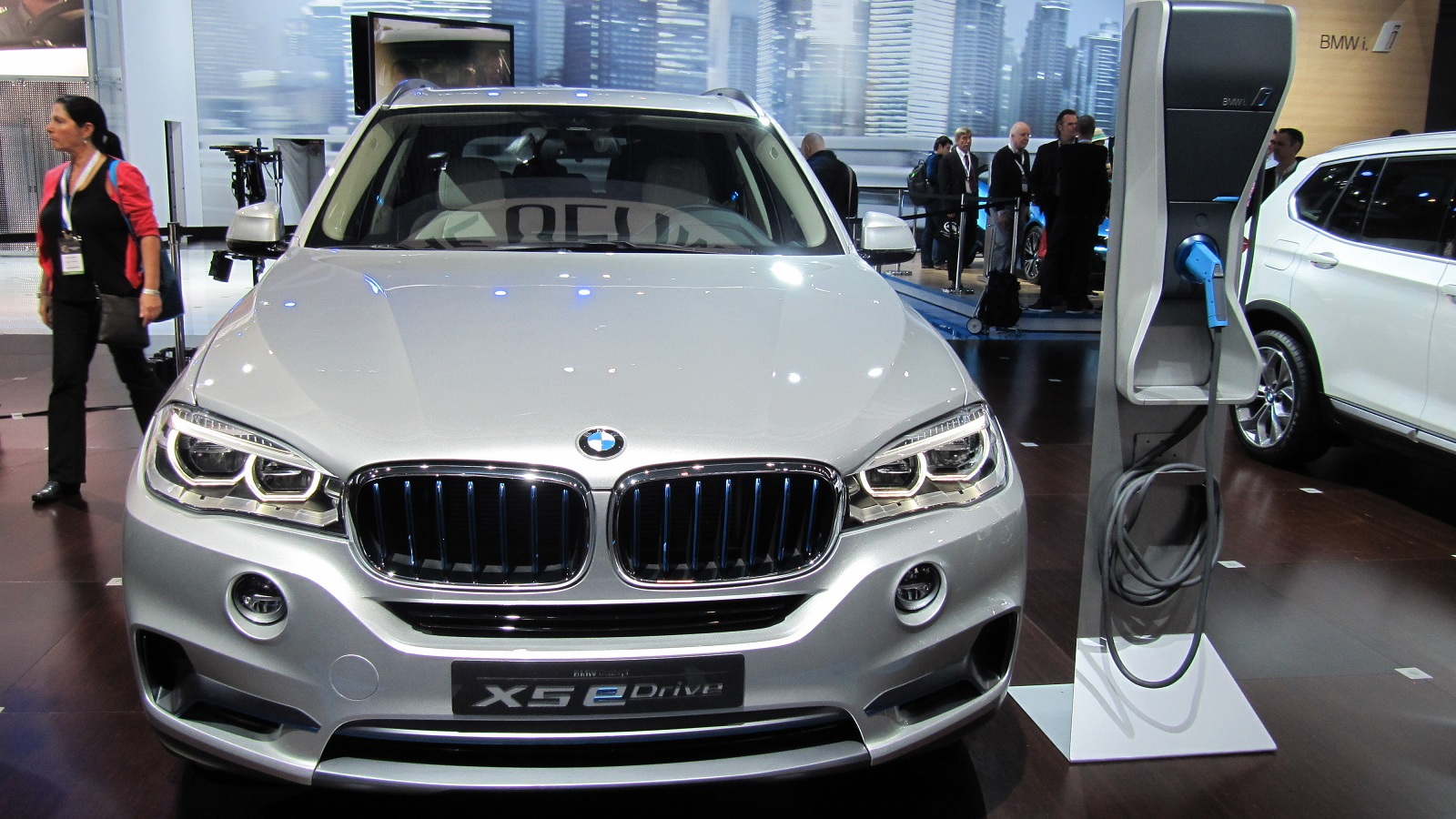 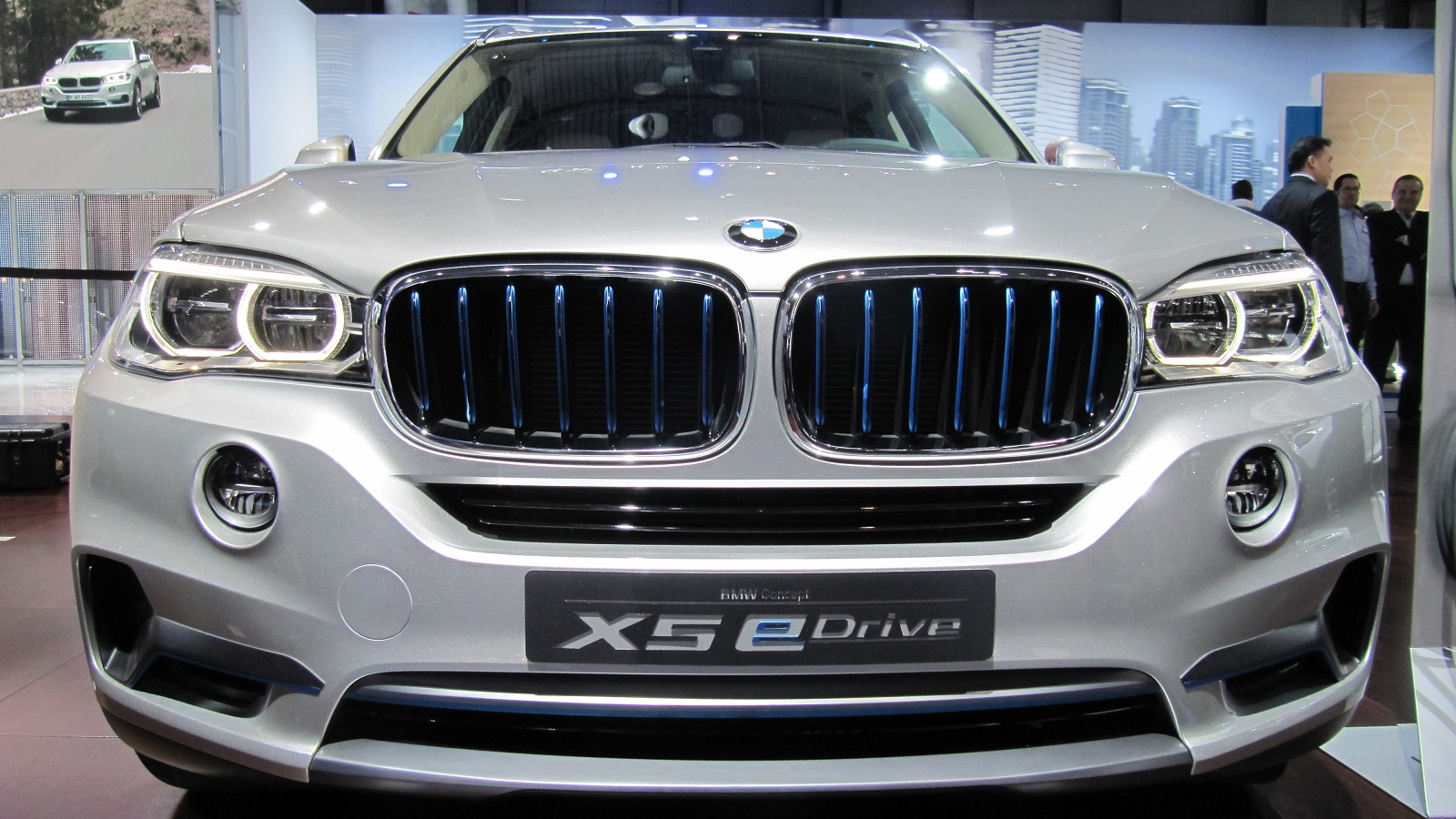 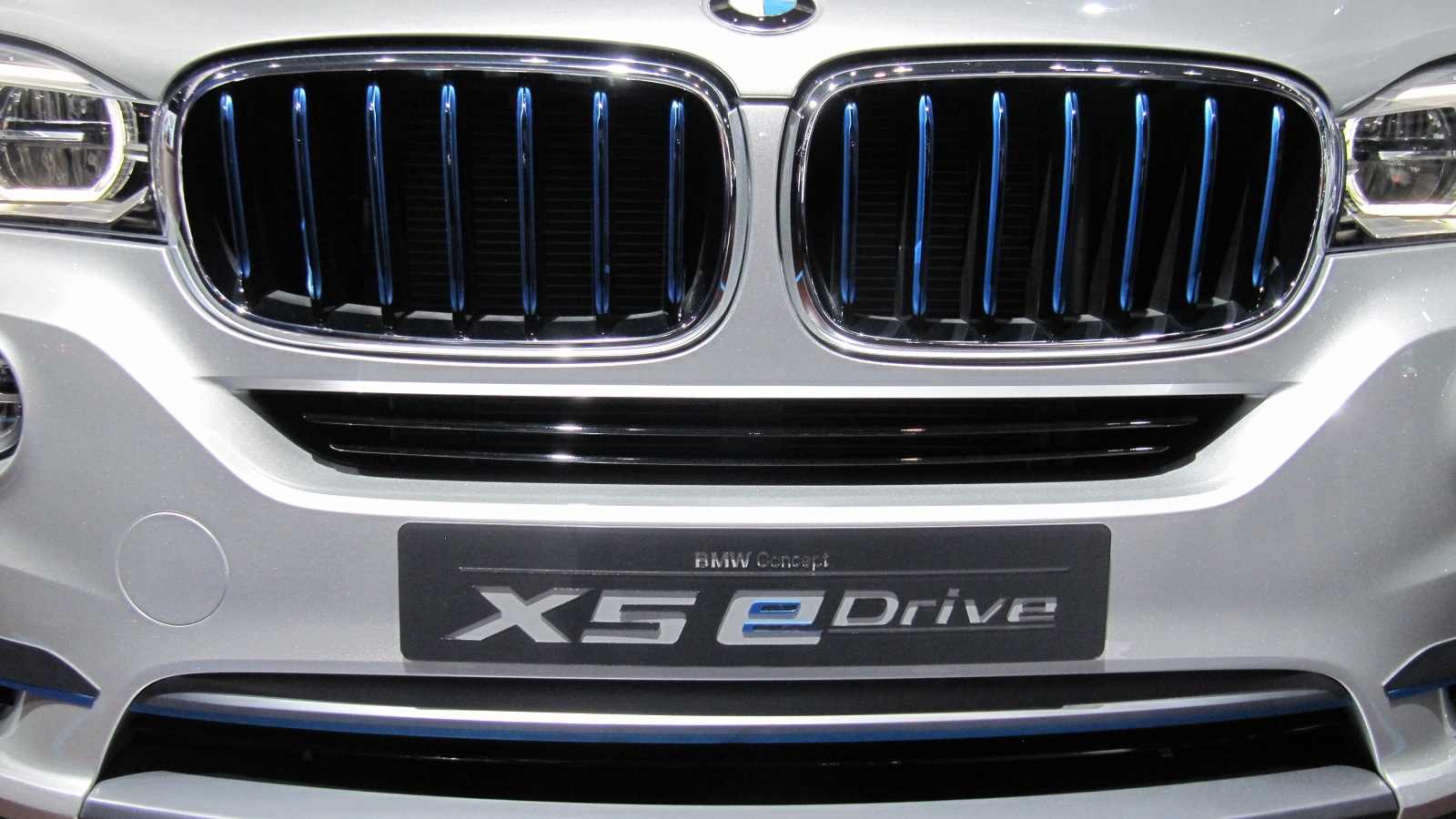 49
photos
BMW is working on a plug-in hybrid version of its X5 SUV, with prototypes already testing on public roads (read a drive report at Green Car Reports), but the vehicle isn’t due to enter production until sometime in 2015. In the meantime, the German automaker is rolling out concept versions of the eco-friendly SUV, the first of which, the Concept X5 eDrive, was revealed at the 2013 Frankfurt Auto Show.

Now, BMW has revealed a “further refined” version of its Concept X5 eDrive, which debuted today at the 2014 New York Auto Show. The changes are hard to spot, mostly because a majority of them can be found in the interior.

A light blue color, BMW’s choice for its electrified vehicles, is used for double-felled seams that  contrast with Ivory White leather used for the seats, door innards and dash. Blue accent strips can also be found around the cabin and are joined by “eDrive” lettering embossed in the front of the headrests, ambient lighting with a blue hue, and an eDrive button that is also illuminated in blue. Take a look in the trunk and you’ll see velour lining and a transparent cover--again illuminated in blue--under which sits the vehicle’s lithium-ion battery.

Not much has changed on the outside since we last saw the original Concept X5 eDrive. The kidney grille bars, air intake bars and the insert in the rear bumper are all finished in the same blue found inside. The concept also gets body-coloured wheel arches, specially styled roof rails, and aerodynamically-styled 21-inch wheels.

BMW’s chosen drivetrain for its X5 plug-in hybrid pairs a turbocharged 2.0-liter four-cylinder engine with an electric motor integrated with the transmission. The X5’s all-wheel-drive system remains intact but can be run purely on electric power for short distances. This makes the Concept X5 eDrive the first BMW to combine the automaker’s xDrive all-wheel-drive system with its new eDrive electric technology.

The gas engine on its own develops 245 horsepower while the electric motor is rated at 70 kilowatts (95 horsepower), enough for 0-60 mph sprints in about 7.0 seconds. Claimed fuel economy is 61.8 mpg for the European combined cycle, using a mix of gas-only, electric-only and hybrid modes. The electric-only mode is said to allow speeds of up to 75 mph and a driving range of approximately 20 miles.

In addition to the various driving modes, there is also a whole host of technology that helps you further save fuel. Building upon BMW’s standard fuel-saving ECO PRO driving mode, the Concept X5 eDrive also gets a Proactive Driving Assistant that works together with the navigation system to allow the route profile, any speed restrictions and the traffic situation to be considered so that the most efficient route can be taken.

In addition to this, there is a SAVE Battery mode, which can be selected to deliberately preserve the battery’s energy capacity. This might be the case, for example, if a longer journey is due to end with a final stage through urban traffic that drivers wish to complete in all-electric mode. Note, BMW is also working on a plug-in hybrid version of its 3-Series, which we expect to enter production next year as well.