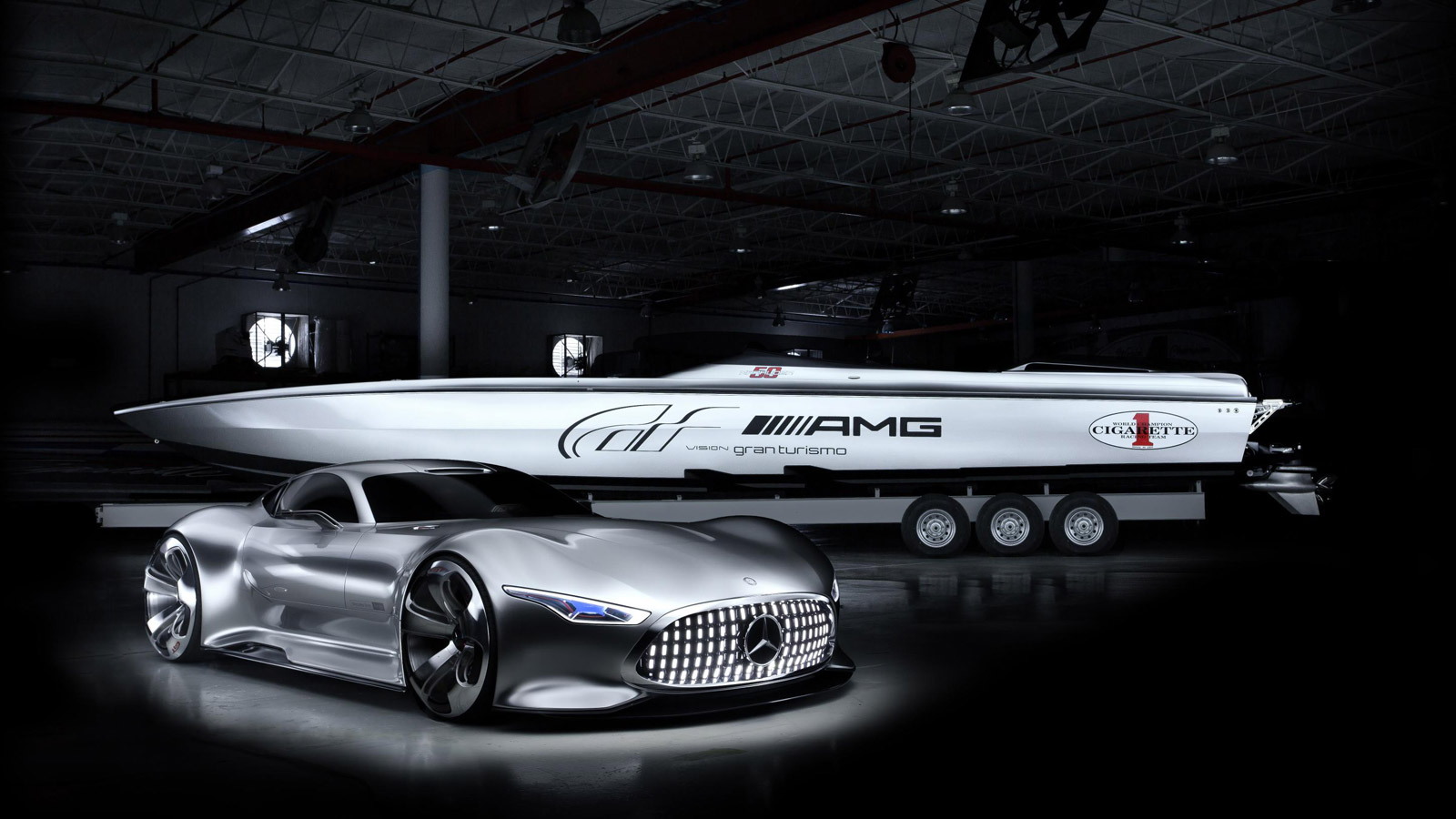 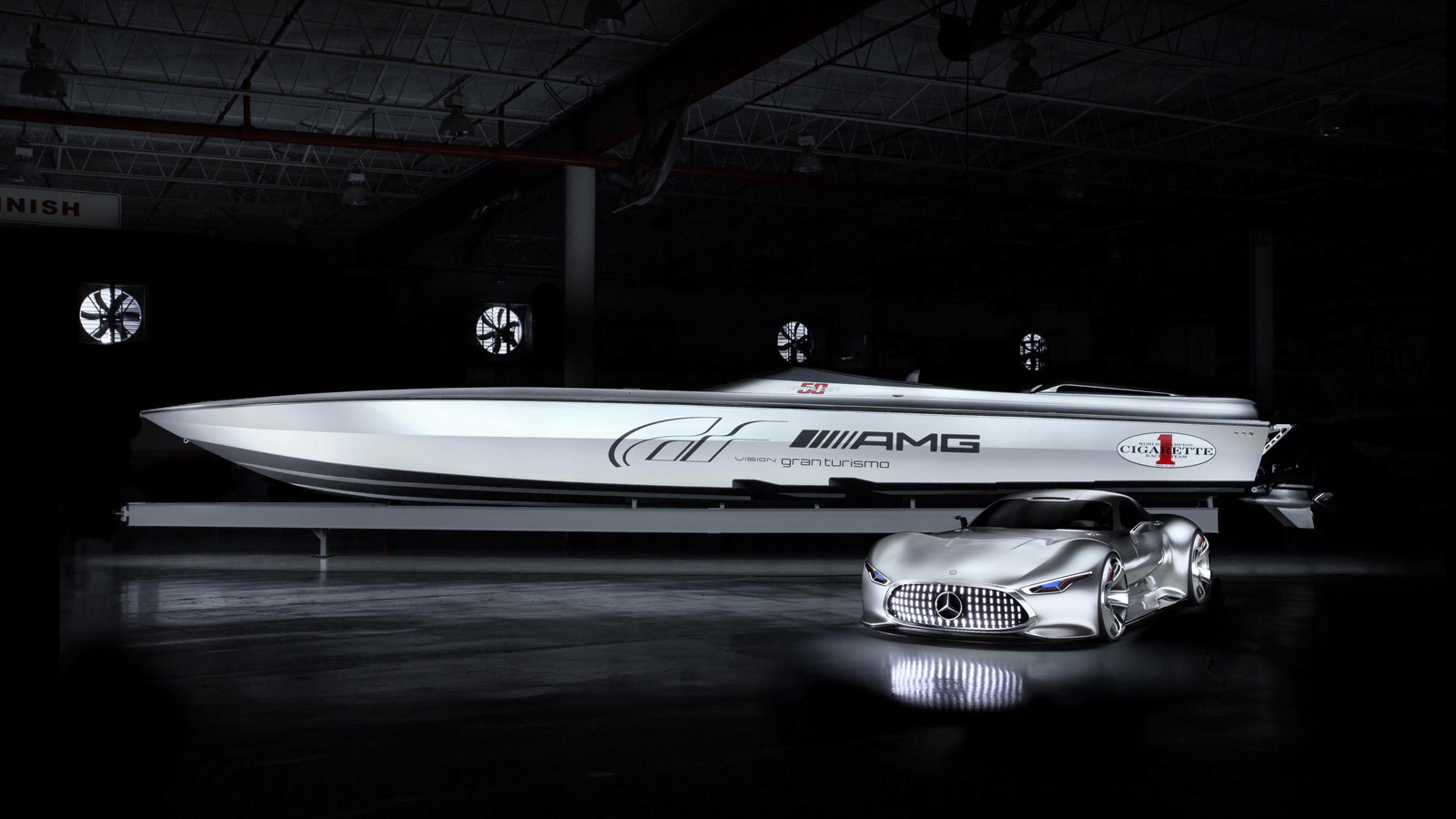 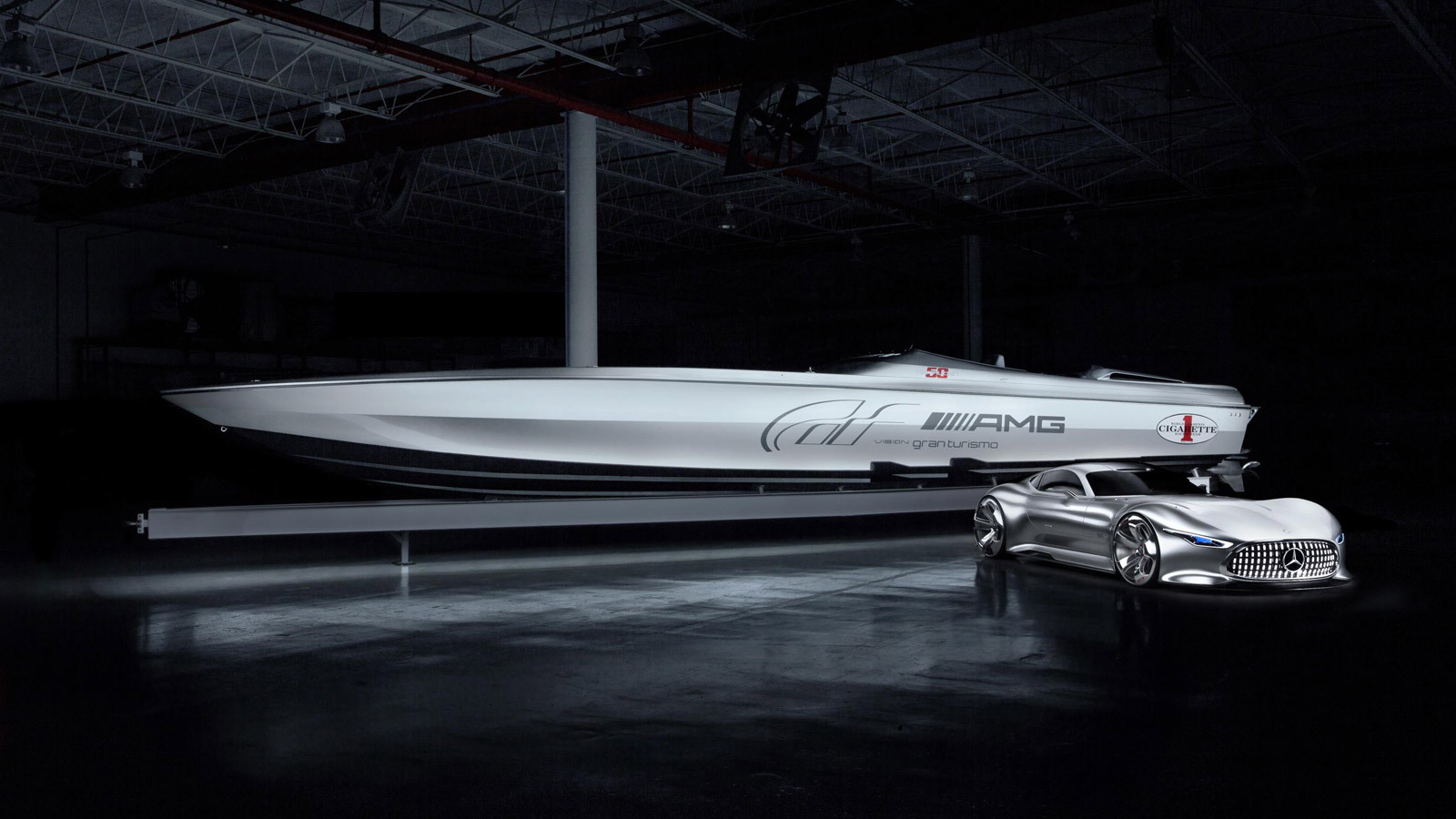 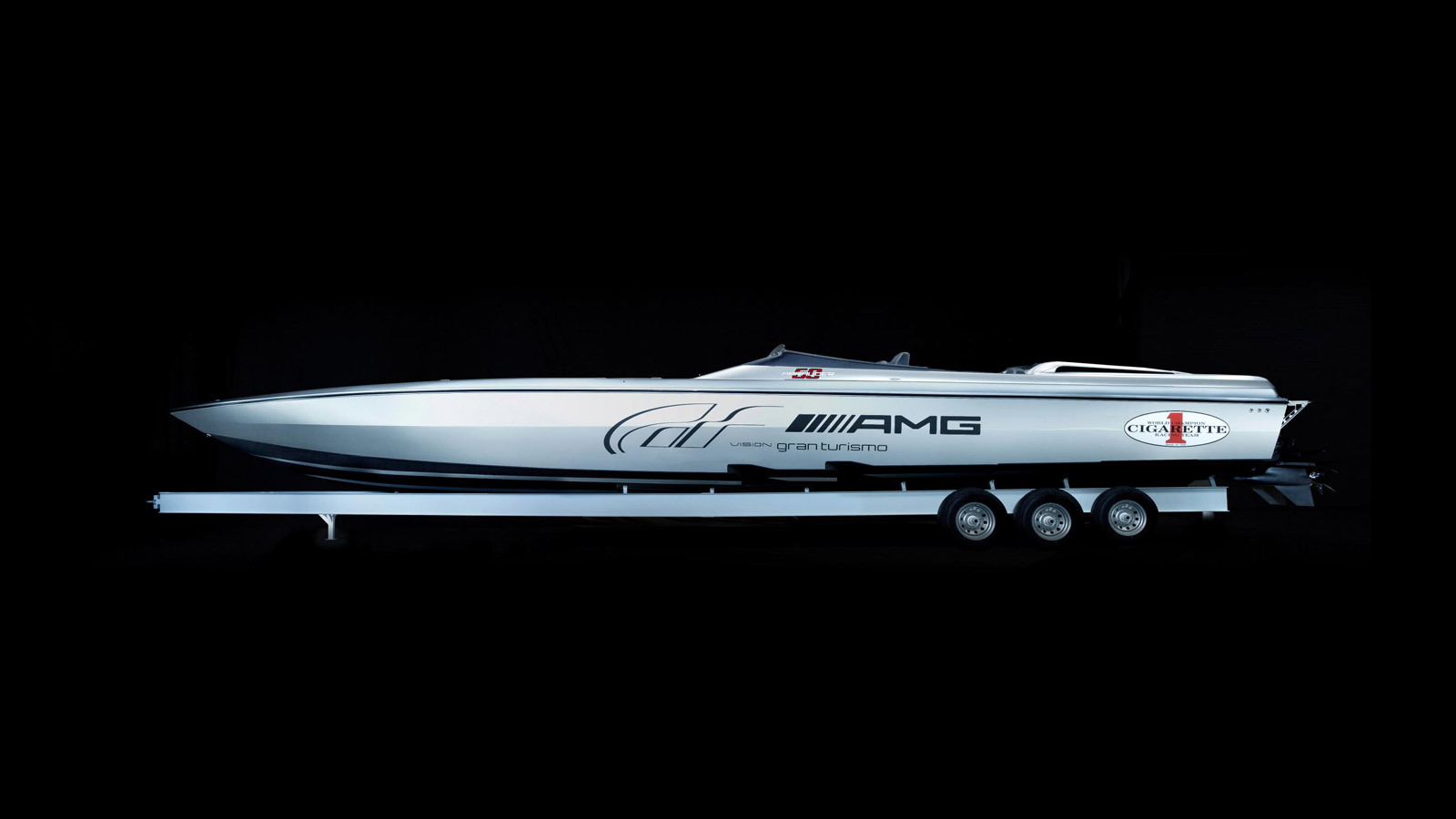 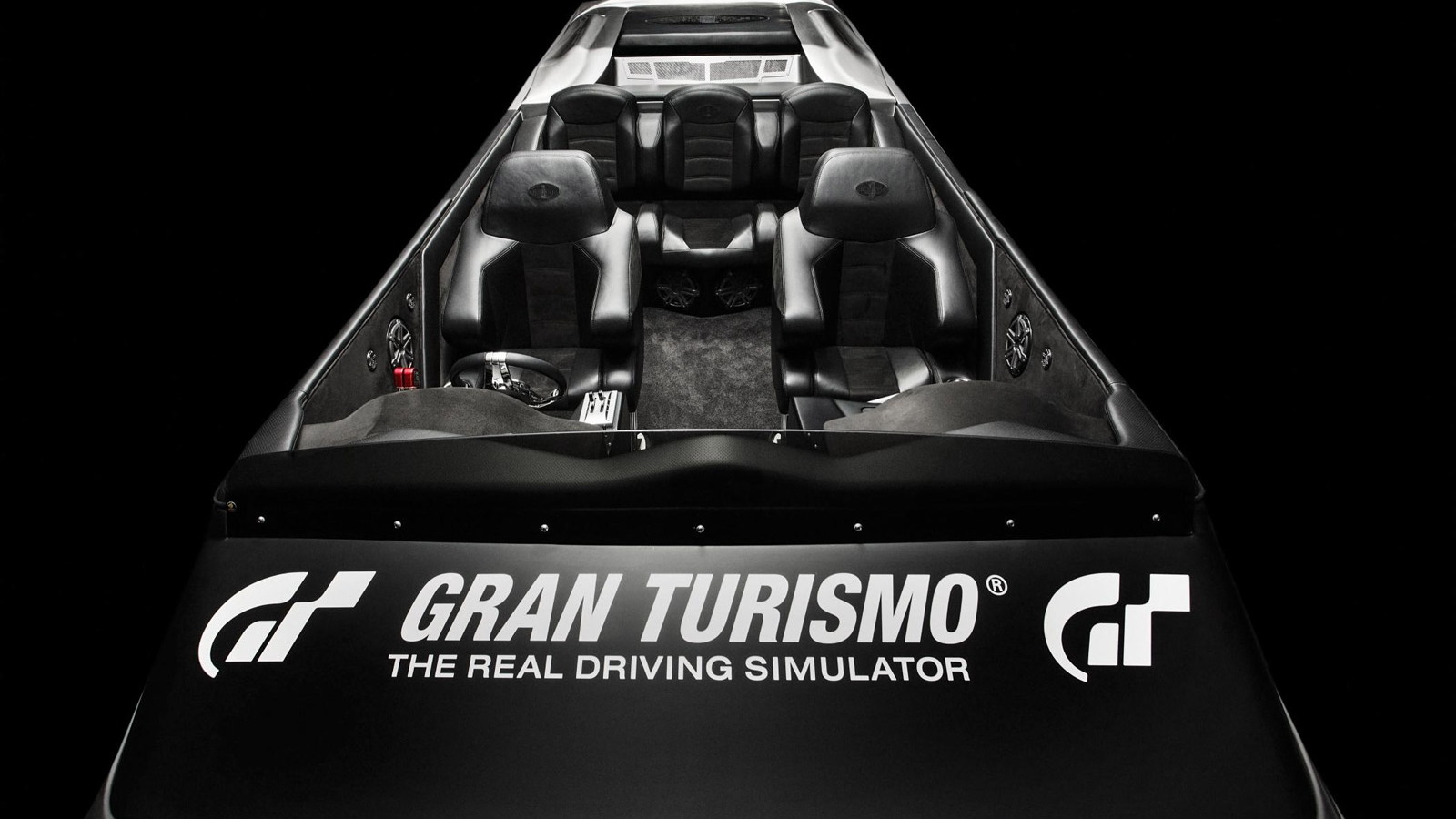 8
photos
Florida’s Cigarette Racing is back with a new speed boat concept inspired by a Mercedes-Benz model, in this case the stunning AMG Vision Gran Turismo supercar concept unveiled last year. The boat is called the Cigarette Racing 50' Vision concept and it is being shown for the first time at the 2014 Miami Boat Show taking place this week.

The boat has a bit more power available than its four-wheeled counterpart. Cigarette Racing tells us it’s powered by twin Mercury Racing engines delivering 1,650 horsepower each, making it the company’s most powerful twin-engined boat. That’s roughly 300 horsepower more per engine than the standard units fitted to Cigarette Racing’s other speed boats like the 50’ Marauder.

Lightweight construction, meanwhile, has allowed for approximately 1000 lbs to be removed from the standard spec weight, thereby allowing the boat to have an incredible top speed of more than 140 mph.

Like the supercar concept on which it is based, no detail was left untouched when designing the interior of the Cigarette Racing 50' Vision GT concept. Carbon fiber is used for the dash panels and is matched by Alcantara on much of the trim. An advanced user interface is also fitted and includes four high-definition displays, Bluetooth connectivity and a next-generation Garmin navigation system.

CHECK OUT: Production Version Of Mercedes-Benz Vision GT In The Works?

On the outside, it features AMG’s Alubeam silver finish which is contrasted at the rear by matte black accents. There is also Gran Turismo logos, signifying the connection between the boat and the AMG Vision Gran Turismo concept, which was originally developed to celebrate the 15th anniversary of the popular video game.

Cigarette Racing’s 50' Vision GT concept will be produced for anyone willing to front up its $1.5 million dollar cost. Interestingly, another company based in Florida is planning to build a production version of the AMG Vision Gran Turismo concept, which will sell for the same $1.5 million figure.