With the Mercedes-Benz A45 AMG, the first high-performance AMG version of Mercedes’ new compact range, set to debut next month at the 2013 Geneva Motor Show, it’s only natural that the similar CLA45 AMG, the AMG version of the new 2014 CLA Class, makes its debut at the following major international auto show, in this case, the 2013 New York Auto Show.

Well, the CLA45 AMG’s debut has now been confirmed for New York, via an entry form for a competition announced on Mercedes' Facebook page.

The competition gives you and a friend the chance to attend the unveiling of the regular CLA as well as the CLA45 AMG at the 2013 New York Auto Show, which kicks off on March 27.

No other details have been revealed, though previous information released by Mercedes has given much insight into the new compact range of performance cars from AMG.

Both the CLA45 AMG and the similar A45 AMG will feature turbocharged and direct-injected 2.0-liter four-cylinder engines. The engines will be rated at close to 350 horsepower and will send drive to all four wheels via a seven-speed dual-clutch transmission.

There will also be a sports suspension setup with independently developed front and rear axles, electromechanical AMG speed-sensitive steering, and uprated brakes and tires to ensure the cars can make the most of their explosive powerplants.

Performance should be scintillating, as you’d expect from any vehicle wearing the AMG badge. Expect 0-60 times of around 5.0 seconds or less.

With the regular CLA's pricing starting at $30,825 (including destination), expect the AMG model to command a hefty premium over that.

For an early look at the new 2014 Mercedes-Benz CLA45 AMG, click here for our previous spy shots post. 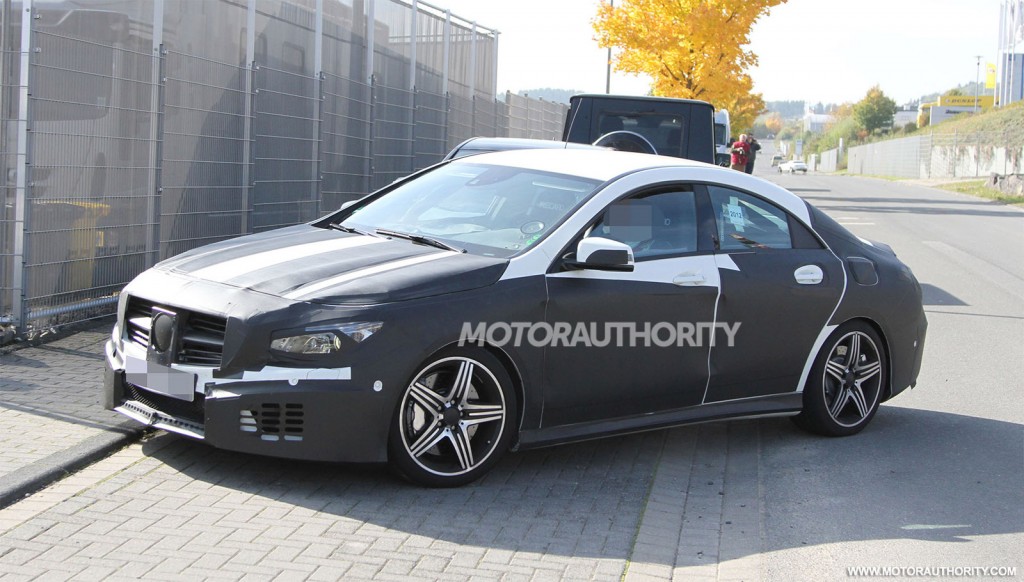