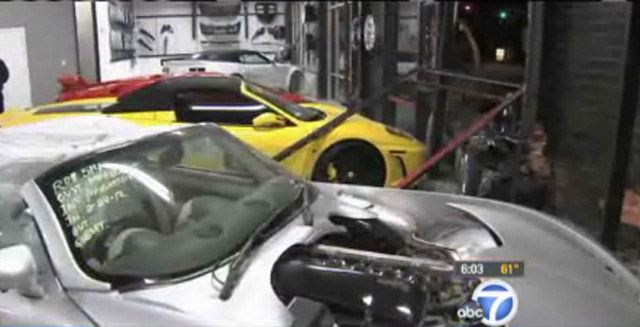 A Lincoln Town Car crashed into a luxury vehicle workshop in Los Angeles early yesterday, damaging three customer cars in the process, one of which may belong to NBA star Kobe Bryant.

Upon crashing, the driver of the Town Car, a 30-year-old male, fled the scene on foot and is still missing.

A female passenger sitting in the back of the car was taken to hospital with serious injuries.

The three customer cars damaged, all of them believed to be owned by celebrities, were luxury models and included a Lamborghini, a Ferrari F430 Spider and a rare TVR Tuscan S.

"It's pretty severe. You see the car [Town Car] in half the building, and there are three or four cars that are damaged," the owner of Specialty Car Craft Steve Saghdejian told ABC News.

The Lamborghini only suffered a cracked window, while the TVR sustained some damage on its passenger side. The Ferrari suffered the most damage due to a door frame crashing on top of it. The Ferrari, finished in bright yellow, featured a Los Angeles Lakers sticker on its rear window and another sticker up front that said “Baller 24” - Kobe Bryant's jersey number.

The shop’s owner didn’t mention who the cars belonged to but did say the total damage bill is likely to be upwards of $200,000.