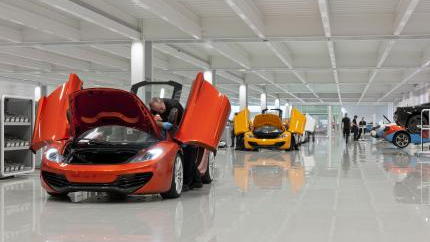 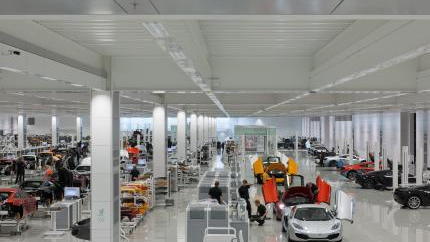 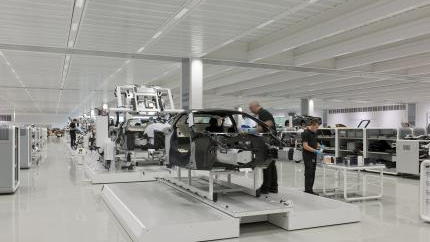 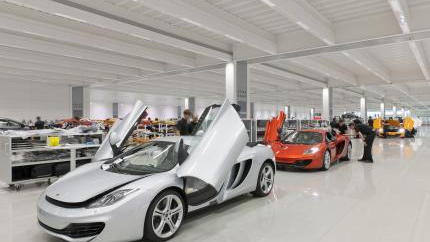 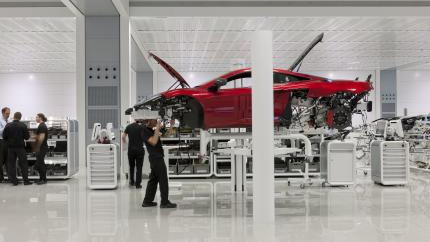 5
photos
After reinvigorating its presence in the consumer market with the MP4-12C, McLaren has no plans to slow down.

In addition to the recently spotted MP4-12C Spider, McLaren is planning several new cars over the next few years, including an entry level sports car and an F1-like flagship supercar. The automaker has confirmed it plans to pump out 4,500 cars annually by 2014.

In order to bring its production capabilities in line with its ambitions, McLaren officially opened the doors of its brand new Production Center in Woking, U.K. this week. The new facility will allow McLaren to more than quadruple production from the 1,000 cars it's building now.

By all indications, the next all-new model we'll see from McLaren (not counting the MP4-12C Spider) is what's been coined the "Mega Mac". That model is the latest Bugatti-beater, but unlike other wannabe "hypercars", it has the prestige of McLaren F1 lineage. The McLaren F1 is essentially the Veyron's predecessor as the world's fastest and most enviable car.

The Mega Mac is expected to share a similar weight with the MP4-12C, thanks to even more carbon fiber, while adding a much livelier engine. An 800-horsepower V-8 is the agreed-upon standard at the moment.

McLaren's expansion plans go well beyond the street car world, too. Its race arm Vodafone McLaren Mercedes is hard at work on next year's Formula 1 race car, the MP4-27.

Meanwhile, McLaren Applied Technologies is busy working with third-party partners in applying technologies from McLaren's extensive resume to other industries. That arm is preparing to get permission for a new Applied Technologies Center and is also working on a five-year deal with bike manufacturer Specialized for a flagship carbon fiber road bicycle.

All of McLaren's activities are a part of what the company considers a greater British industrial renaissance. McLaren chief Ron Dennis explains: "In the UK, there has been an over-reliance in the past on the financial and service sectors. Now, industry is realizing that Britain’s grand manufacturing tradition is a solid platform upon which to build--and I want the McLaren Group to play its part in the crucial recalibration of UK plc."