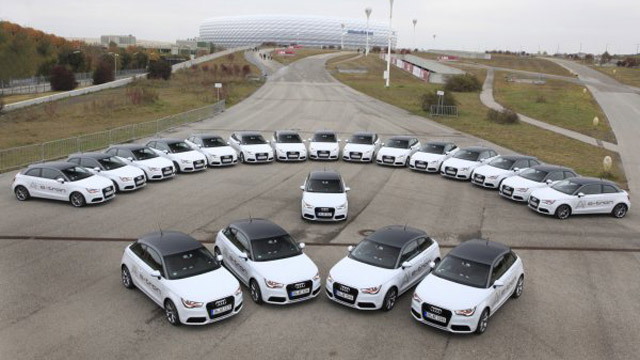 9
photos
As of today, 20 Audi A1 e-tron electric car prototypes are on the roads of Munich, Germany, as part of a new pilot program to gather data on driver behavior, electric infrastructure requirements, and a new communication network between drivers and electric charging stations using smartphones.

The program is part of a greater trial run by the German government known as the “Modellregion Elektromobilität München,” which has already seen a number of electric charging stations set up all over the country.

Importantly, all of these charging stations are powered using electricity generated via renewable energies, such as wind farms.

For Audi, the decision to supply the A1 e-tron fleet was simple. The automaker is looking to use the program to learn more about a customer’s electric car usage needs, and their expectations in this regard. Expect more electric car fleets from Audi to pop in other regions, perhaps even in the U.S.

The A1 e-tron isn’t just an electric car like BMW’s ActiveE vehicles or the Nissan Leaf, but rather a range-extended electric car similar to the Chevrolet Volt and Fisker Karma.

Its output of 102 horsepower enables it to reach a top speed of 81 mph. If the lithium-ion battery stored under the floor runs out of energy, then a compact internal combustion engine--the range extender--recharges the battery as needed to boost the vehicle’s operating range to as much as 155 miles. On electric power alone typical driving distances are about 31 miles.

For more details on the Audi A1 e-tron, click here.