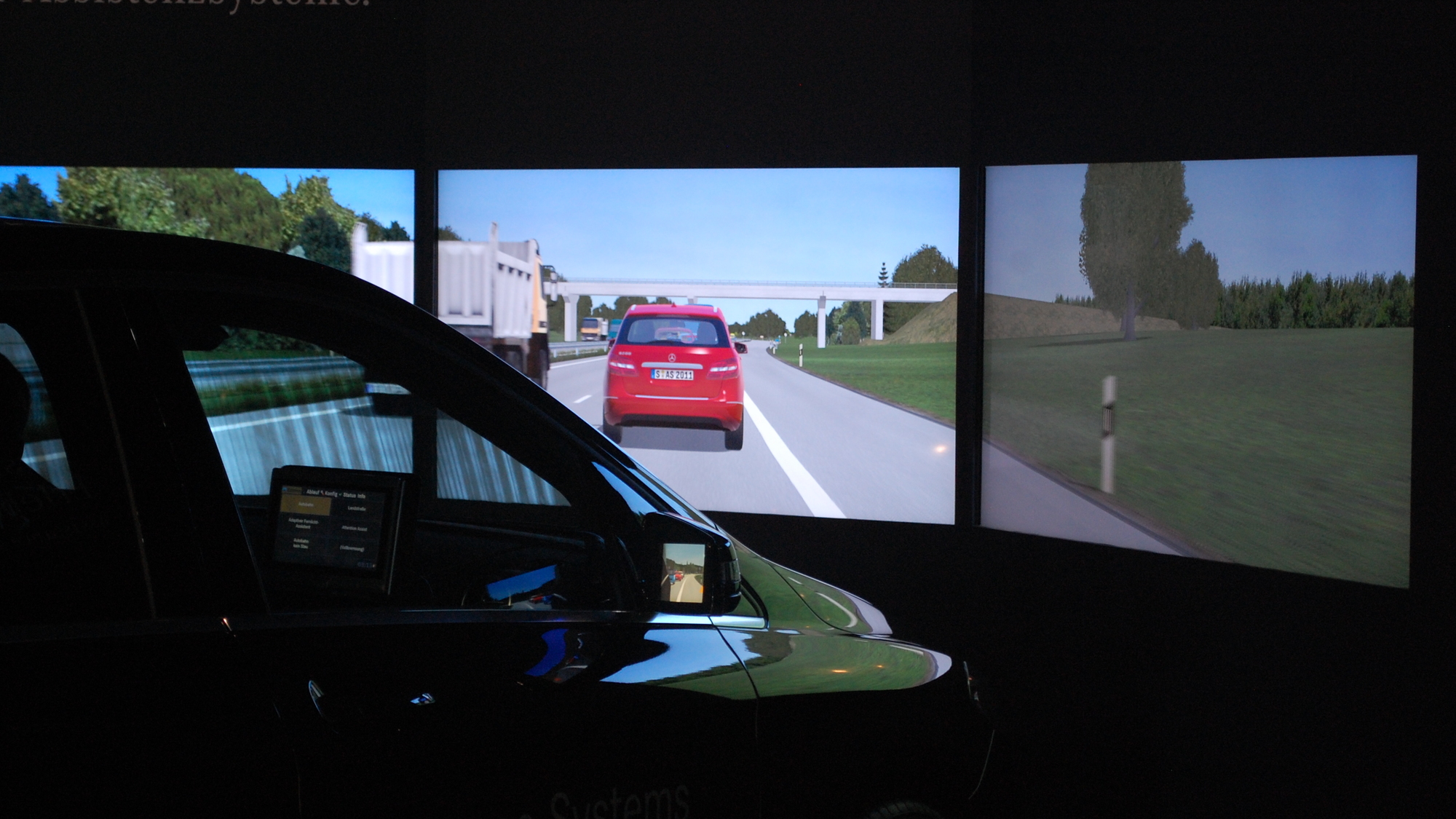 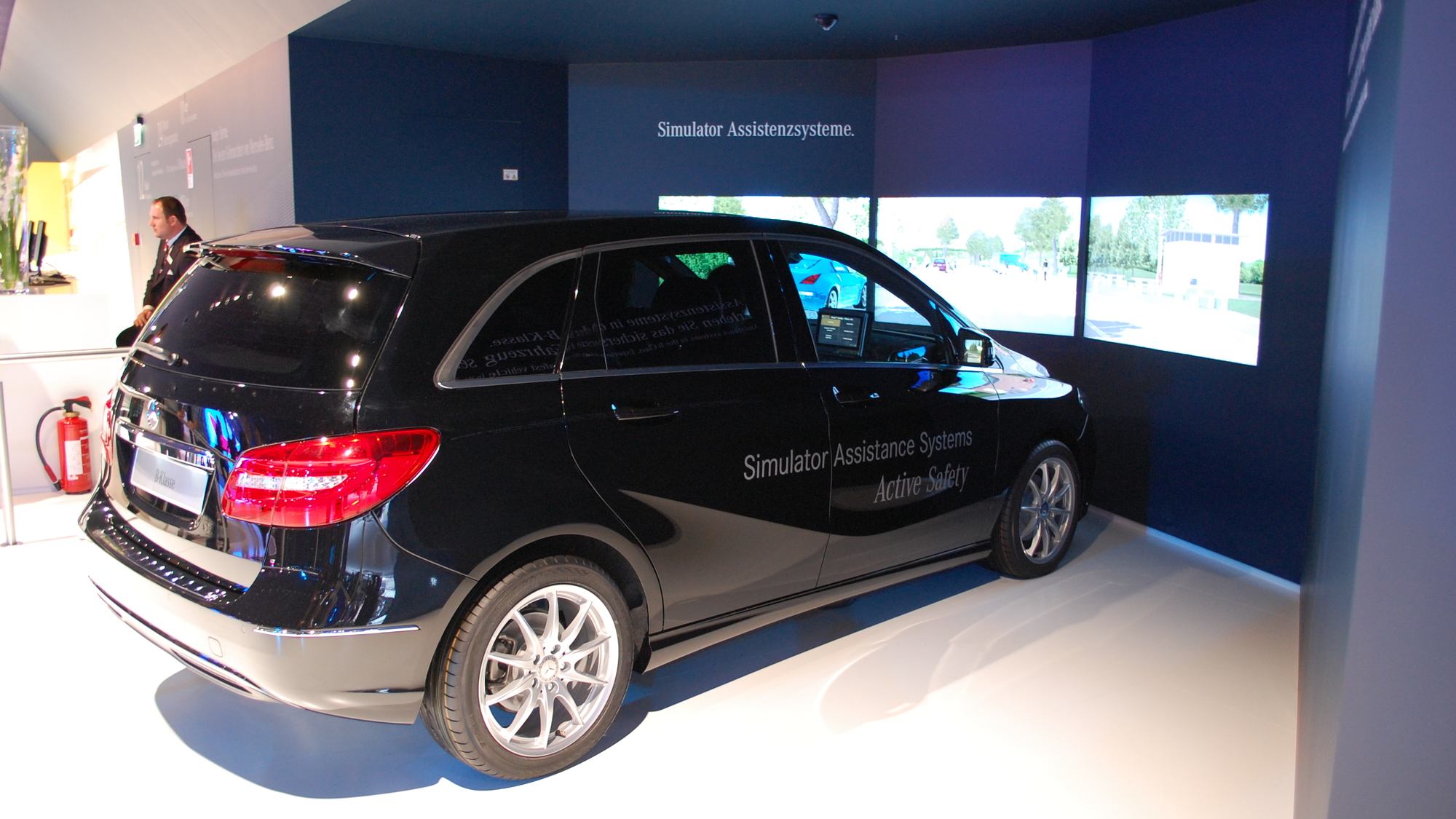 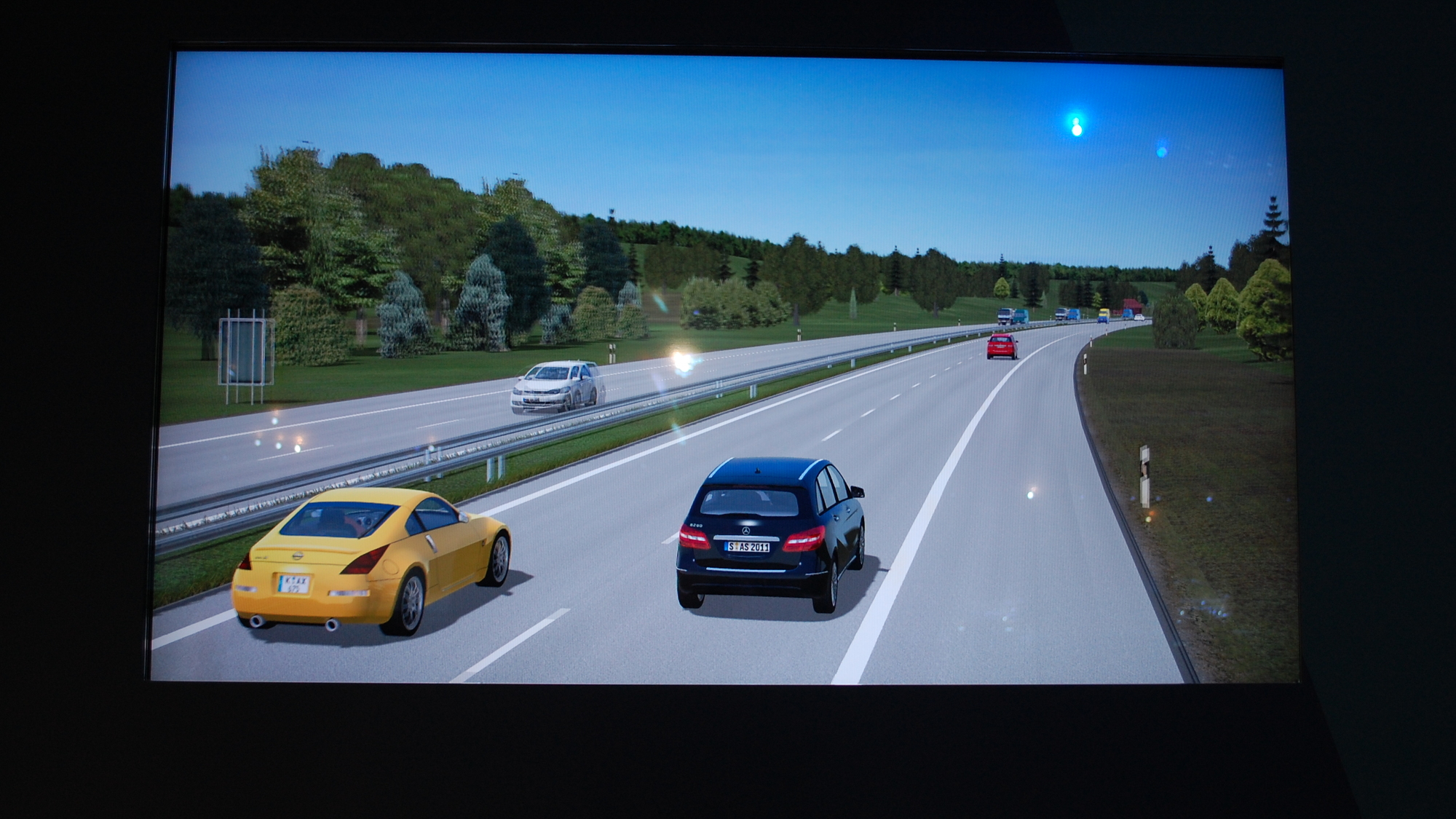 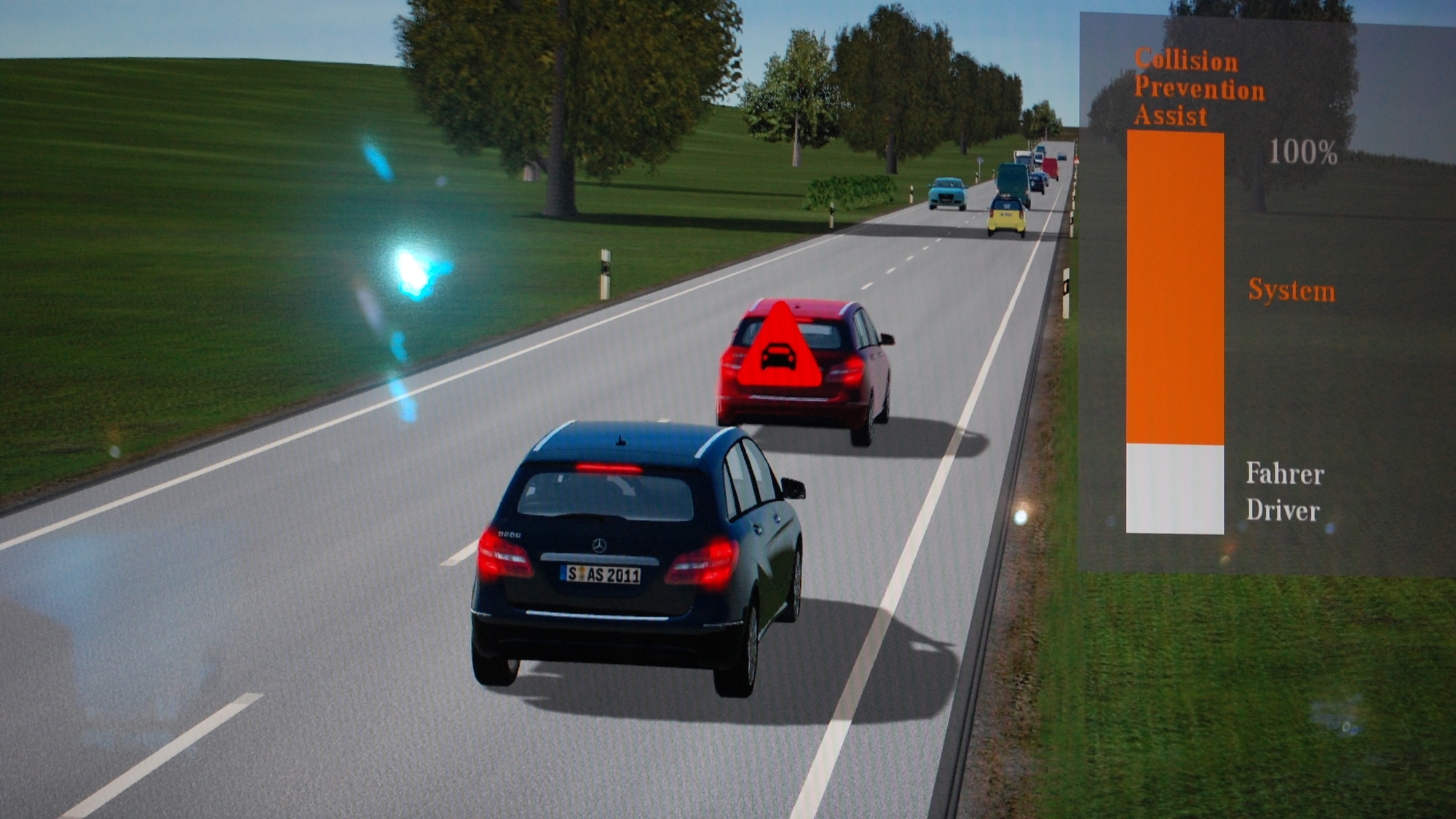 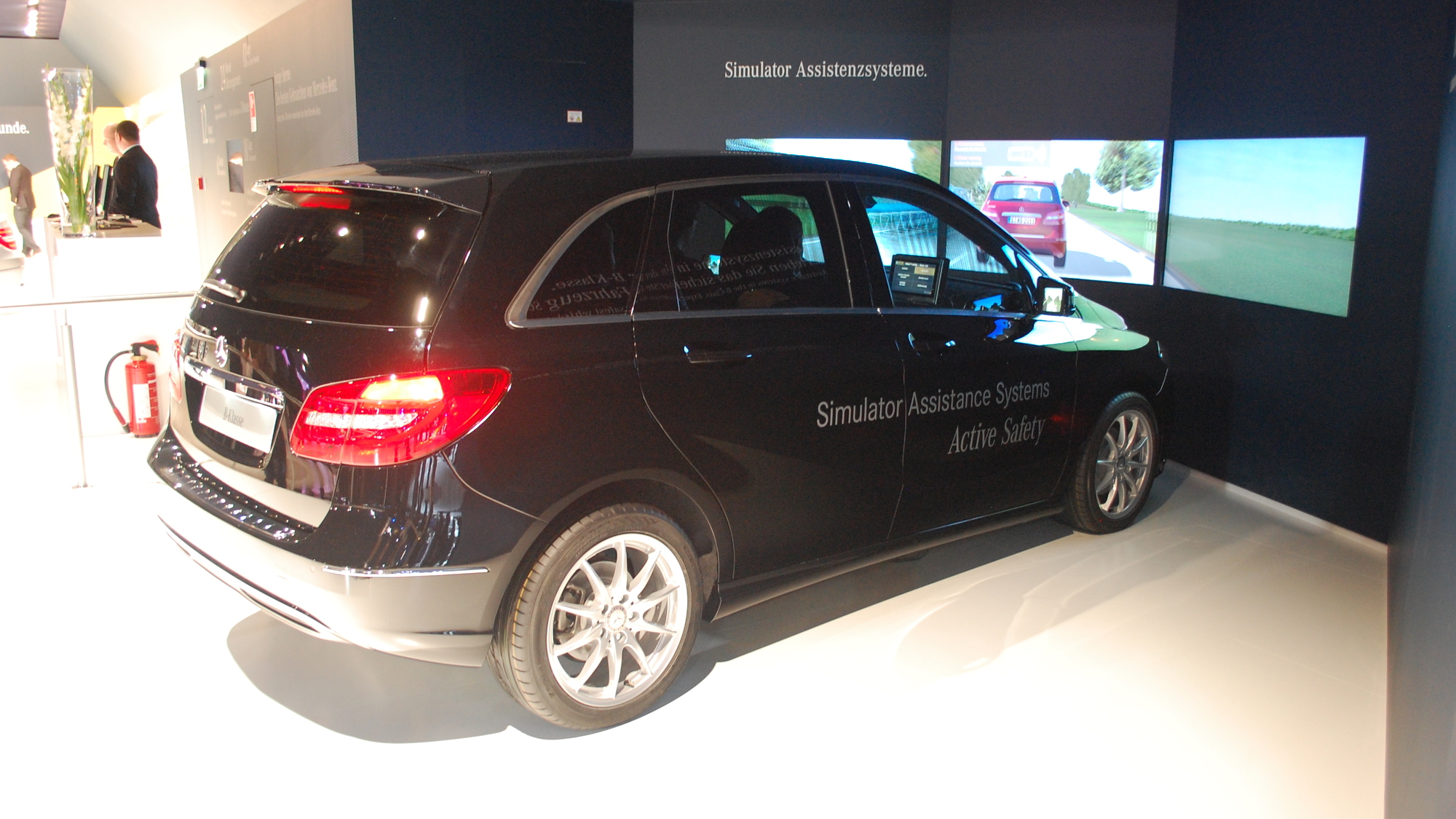 Modern racing videogames are getting pretty good these days, with handling and graphics capabilities that allow for a pretty realistic driving experience.

It's also cheaper than racing for real, not to mention safer - "Life has no 'reset' button", they often say. We were glad of that little detail at the 2011 Frankfurt Motor Show today, where we test-drove Mercedes-Benz' safety systems driving simulator.

To cut a long story short, we "crashed". The reset button was duly pressed, and we had another go. It was an interesting experience though, and showed us that modern cars really can help in dangerous situations.

The first scenario in the simulator demonstrated the Active Cruise Control function. Pulling onto the freeway from a rest stop, we followed another car and set the cruise control to a pre-set speed.

Our 2012 Mercedes-Benz B-Class then kept a safe distance from the vehicle in front, slowing down and speeding up when they did the same.

The drive also highlighted some of Mercedes' other safety features, such as lane-departure warning, which sends a vibration through the steering wheel when you get close to the edges of your lane, and blind-spot warning, which illuminates a triangle on your mirror when another vehicle passes through your blind spot.

Next, we joined the virtual traffic on a rural road. The aim was to follow another vehicle, and when it begins to brake, we brake a little less and then harder as an audible warning sounds.

In theory, if the closing speed is too high, the car then applies the brakes itself to avoid a collision. What actually happened was that our closing speed was a little too high and we sailed through the virtual car in front - in real life, we'd have needed more than a reset button.

We aren't quite sure what happened but on a second attempt and with a little more participation from yours truly, we stopped inches from the other car's rear bumper. In both scenarios, all passengers in the car could feel their seat belts pulling them back into the seat, making the scenario genuinely dramatic.

The final scenario involved driving down a country road at night, to test the automatic high and low beam switching and adaptive headlights.

Starting with lights on high beam on a dark road, approaching traffic resulted in the lights automatically dipping and focusing away from the oncoming vehicles. The same happened as we approached cars in front, the lights then switching back to high beam as we overtook them.

All three scenes proved how useful modern safety features found in Mercedes-Benz models and other cars can be, whether helping to brake the car when you lose concentration or allowing you to keep both hands on the wheel on an unlit road.

As our little "incident" confirmed though, the best policy is to always give the road your full attention to avoid incidents in the first place - because life doesn't have a reset button...