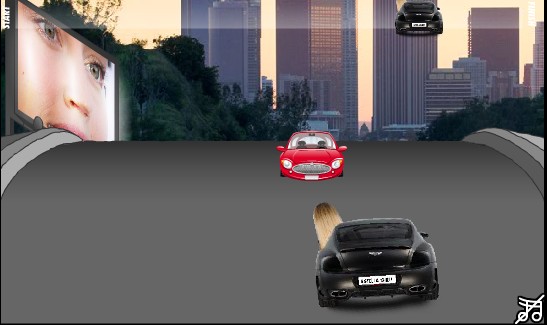 If you were paying attention last week, you probably heard about model/actress Estella Warren's run-in with the law (which happened shortly after her run-in with a row of parked cars). Well, if you thought you'd heard the last of Ms. Warren, think again, because TMZ has made her the subject of a new game called "Drivin' With Estella".

In the game, you play Estella, weaving her way home after a long night of partying with her fellow supermodels. (Additional supermodels not included.) From the looks of it, Estella has chosen to go the back way -- meaning, the wrong way down a one-way street with more than its share of construction hazards. Using your cursor, you can chivalrously guide Estella back to her condo, at which point she will lock the door, pass out on her Corinthian leather sofa, and forget to thank you later.

As games go, "Drivin' With Estella" isn't especially challenging. In fact, it looks like the sort of thing that a student might've designed for a senior project, back when Flash was still owned by Macromedia, but with billboards changed to Estella's face and a blonde head of hair attached to the driver's side window. It almost certainly wasn't built from scratch, because if it had been, the designer would've put her in a Toyota Prius (the car she was driving at the time of the incident) instead of a Bentley Continental GT, which looks suspiciously like this 2010 version from Russia's Top Car tuners.

That said, if you're just waking up and need something to do while the coffee's brewing, there are worse ways to pass the time. Added bonus: the weird quacking/hurling noise Estella makes as she passes obstacles makes Monica Seles sound dignified by comparison.