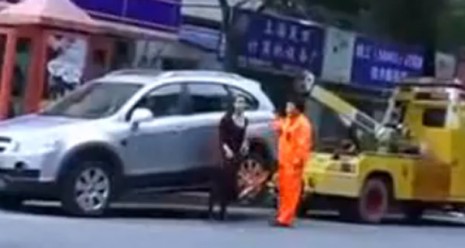 Upset woman has her car towed

This video was simply too funny to ignore. For anyone who’s ever had the infuriating feeling of having a car towed away, you now have a new hero.

Also see: So Is Chrysler's Invisible Ad Monkey Flipping Off PETA? and Mercedes-Benz: US Gas is Too Dirty For Our Engines

The woman in this latest clip was simply never going to accept that her car was being towed so after what seems like a relatively calm exchange with the tow truck driver, she proceeds to hop back into her car, start the engine and then attempt to drive off--tow truck in tow.

Of course, hilarity ensues. We won’t spoil it for you so go ahead and hit play.