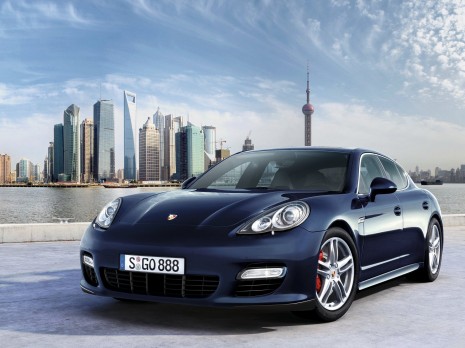 Porsche's Panamera has taken a lot of heat and received a lot of praise for its unusual looks. Its performance, however, has been almost universally impressive, and soon, it could get even more ferocious. The Turbo S variant of the Panamera may be coming as soon as the end of this week.

Reports from Germany to Romania to Italy are all talking of a debut ahead of a first showing at the New York or Shanghai auto shows, and the figures are about what you'd expect with the 'S' appendage on the Turbo badge: 540-550 horsepower, 590 pound-feet of torque, 0-62 mph in 3.8 seconds, and a top speed of 188 mph.

That's about 50 more horsepower, 0.2 seconds quicker to 60 mph and the same top speed as the current standard Panamera Turbo (pictured)--already a blazingly fast car for its size. It's also a similar jump as seen from the 911 Turbo to the 911 Turbo S. The Sport Chrono package for the Panamera Turbo already shaves 0-60 mph times down to 3.8 seconds, so the same package on the Turbo S could get under 3.5 seconds to 60 mph.

The engine will be the same size and layout--a twin-turbo, 4.8-liter V-8--but with a more powerful tune.

Look for the first official info on the Panamera Turbo S to arrive as early as the end of this week, with an official debut in just over two weeks in either New York, Shanghai, or both.