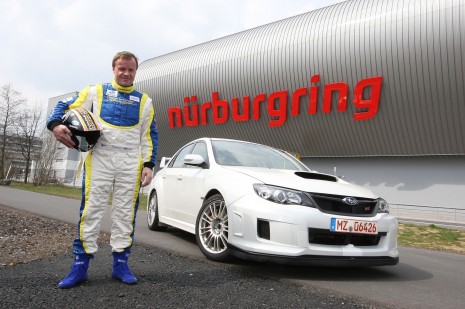 If you aren't already aware, Travis Pastrana, while being one of the nicest guys in motorsports, is also one of the craziest. Case in point: he set the world record for jumping a Subaru WRX STI onto a barge in Long Beach Harbor. That car, along with Tommi Makinen's Nurbugring lap car and a handful of others, will be at this year's SEMA show.

If you missed Makinen's 'Ring run in a WRX STI, here you go:

The other Subarus on display include the 2010 WRX STI from the Get More G's commercials, and three other custom cars, one each from K&N, Kicker Audio, and the Subiefest Best of Show Winner, Jamarri Whiteseide's 2006 STI.

Travis Pastrana and Dave Mirra, Subaru factory rally drivers, will also be on hand to sign autographs November 2 and 3, and four-time WRC champ Tommi Makinen will also be milling around the show.

SEMA starts November 2, and we'll be on hand to bring you live shots from the show floor.