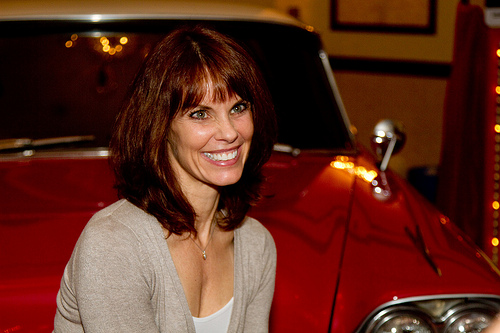 This is actress Alexandra Paul. Perhaps you remember her from such films as Rough Air: Danger on Flight 534, Murder Dot Com, or her star turn on Baywatch. We don't. We remember her from the documentary Who Killed The Electric Car?**

Alexandra has a long history with EVs -- such a long history, in fact, that Chevrolet has invited her to Detroit tomorrow to talk to the Volt's engineers and designers. We're not exactly sure how that all went down, but from where we sit, it looks as if Chevy is bringing her on as a guest journalist/spokesmodel. Which is fine because, hey, somebody has to do it, and now that Pamela Anderson is busy with PETA again, Alexandra seems like a good first-altnernate.

Only thing is, Ms. Paul doesn't want to ask the Volt peeps her own questions, she wants to ask yours. So get cracking: head on over to the Volt's Facebook page and drop her a line. Tomorrow, as Elvis once said, will be too late.

**We also remember her from Christine, which, in retrospect, seems like maybe the best movie a green-minded actress could make. Because really, what could be more eco-friendly than a car that runs on HUMAN BLOOD?