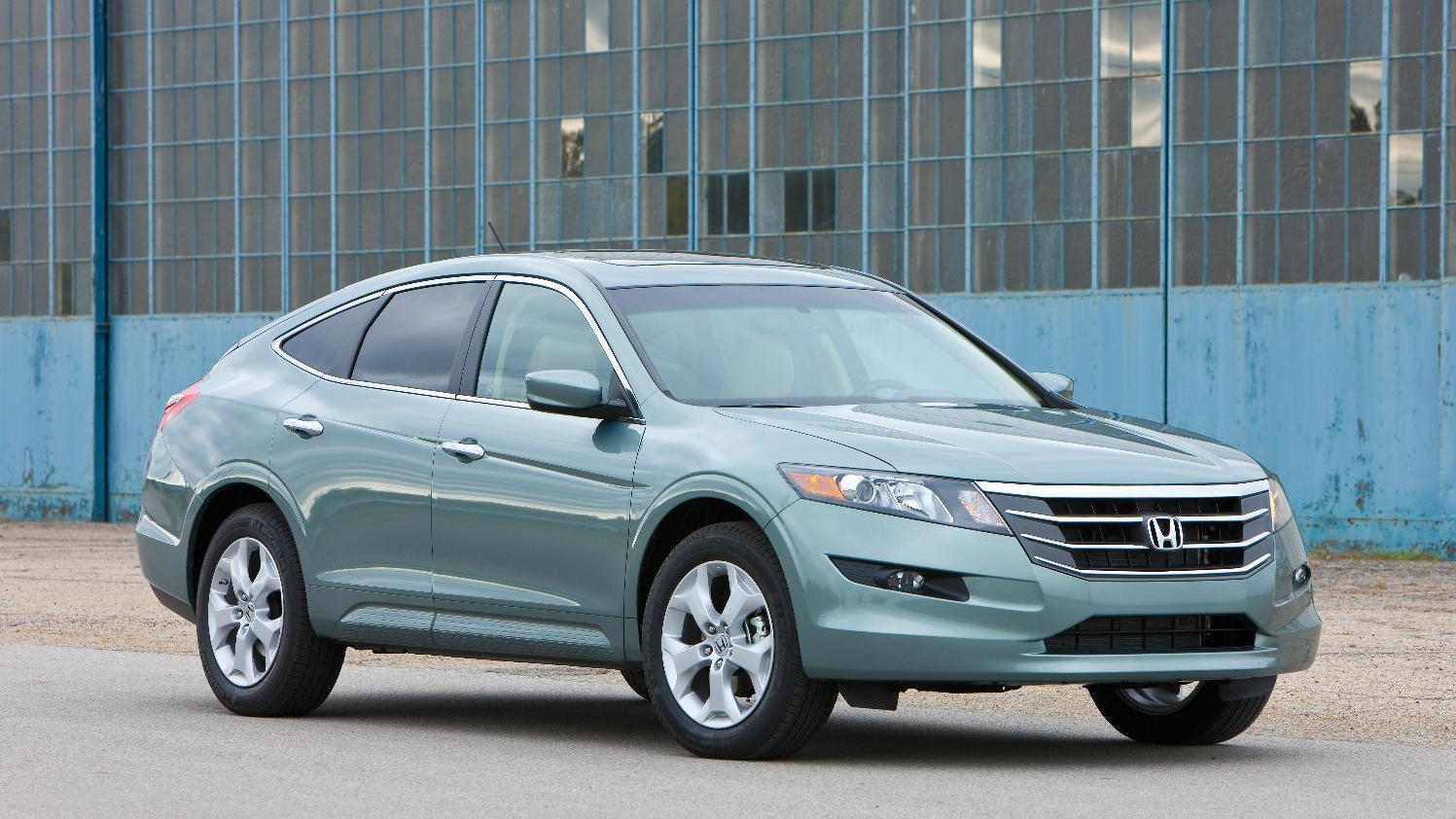 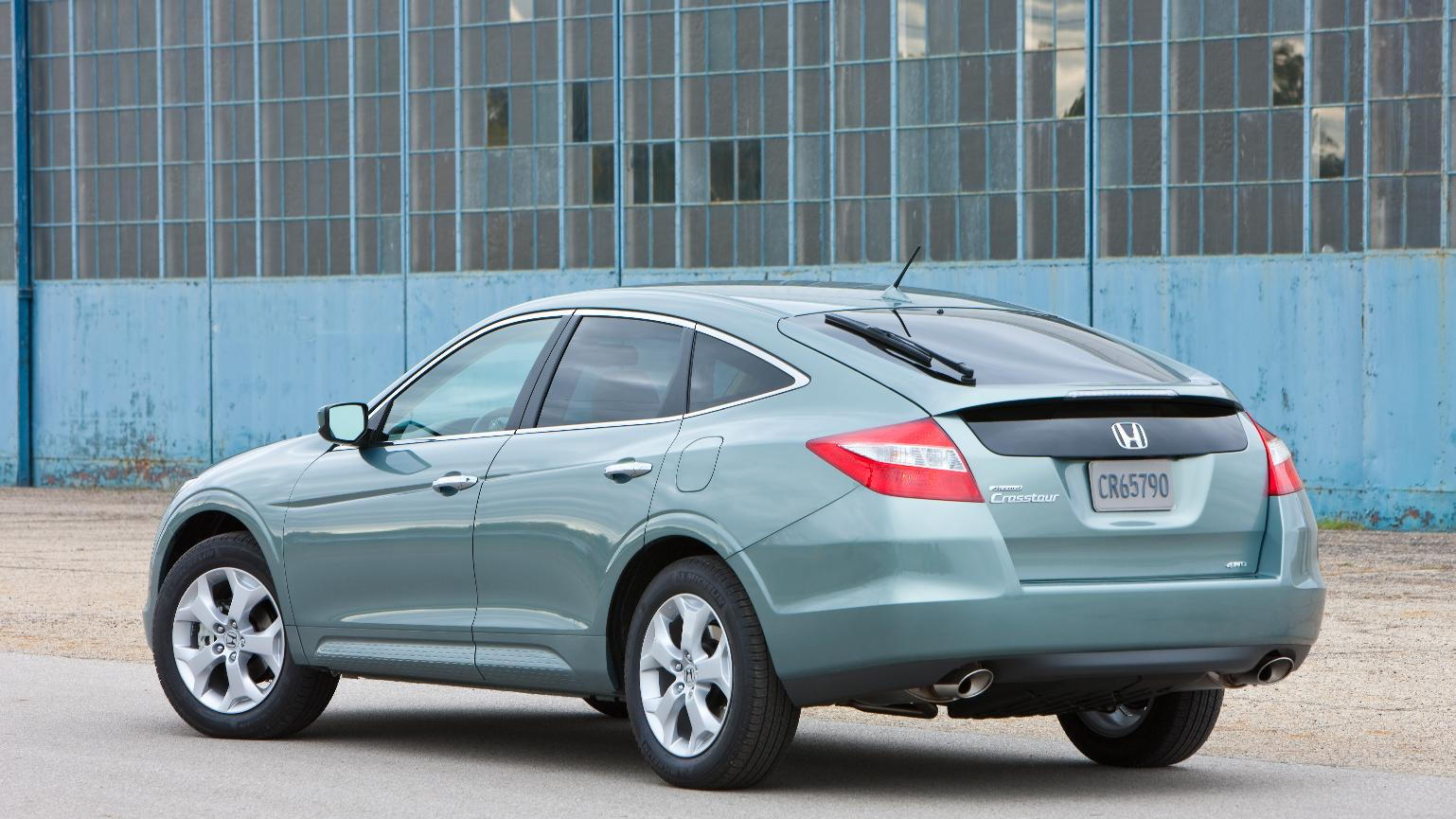 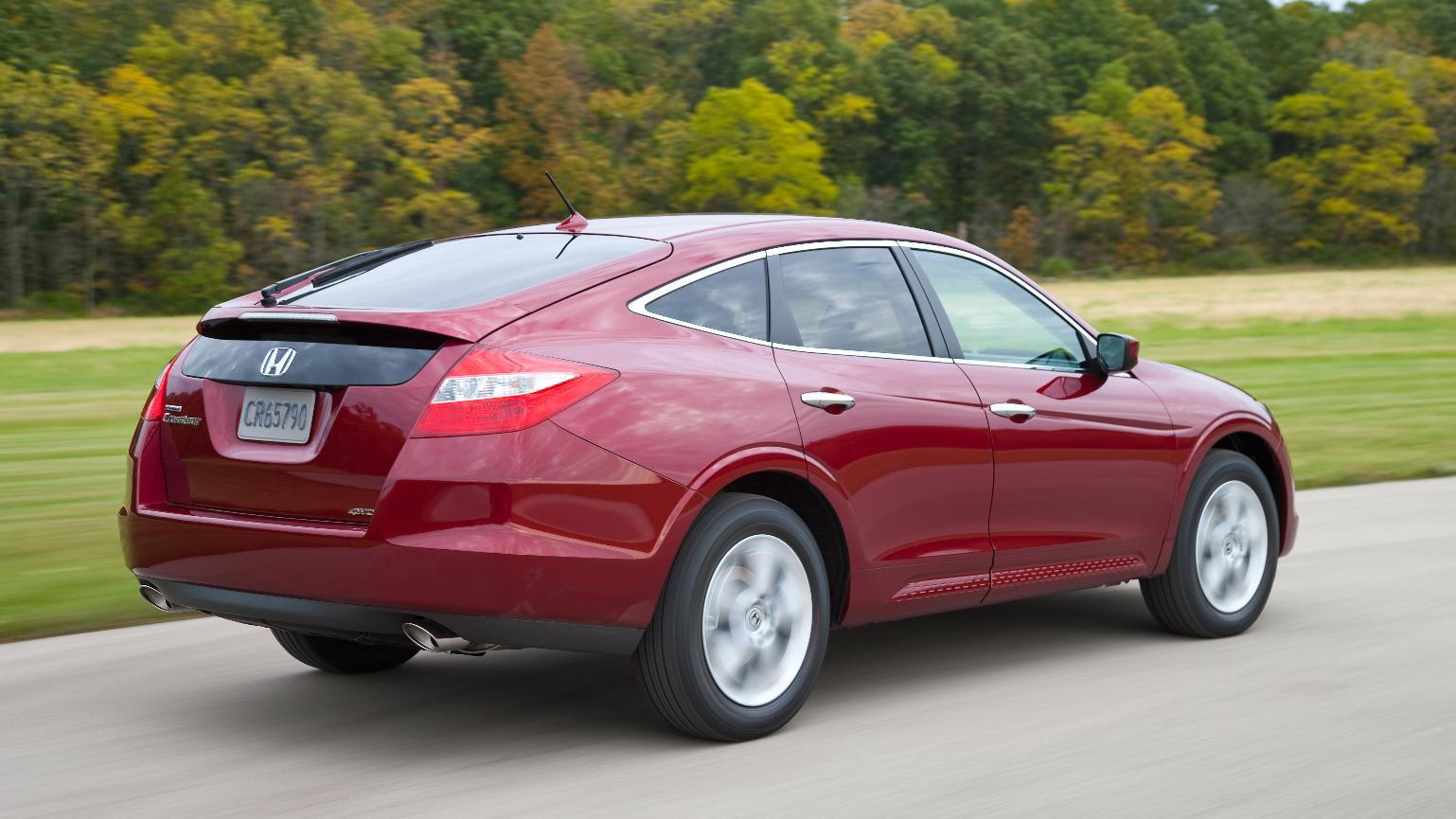 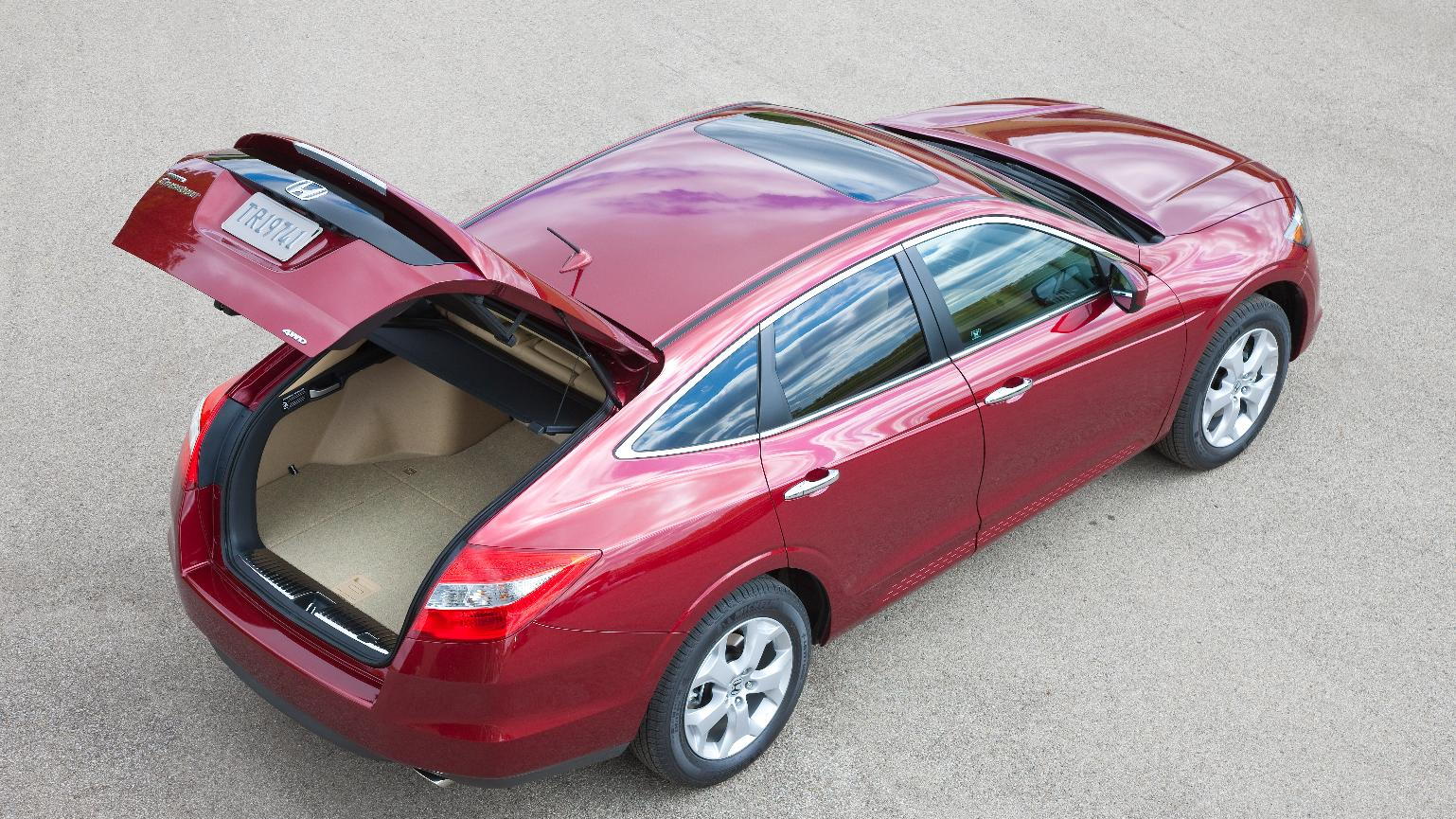 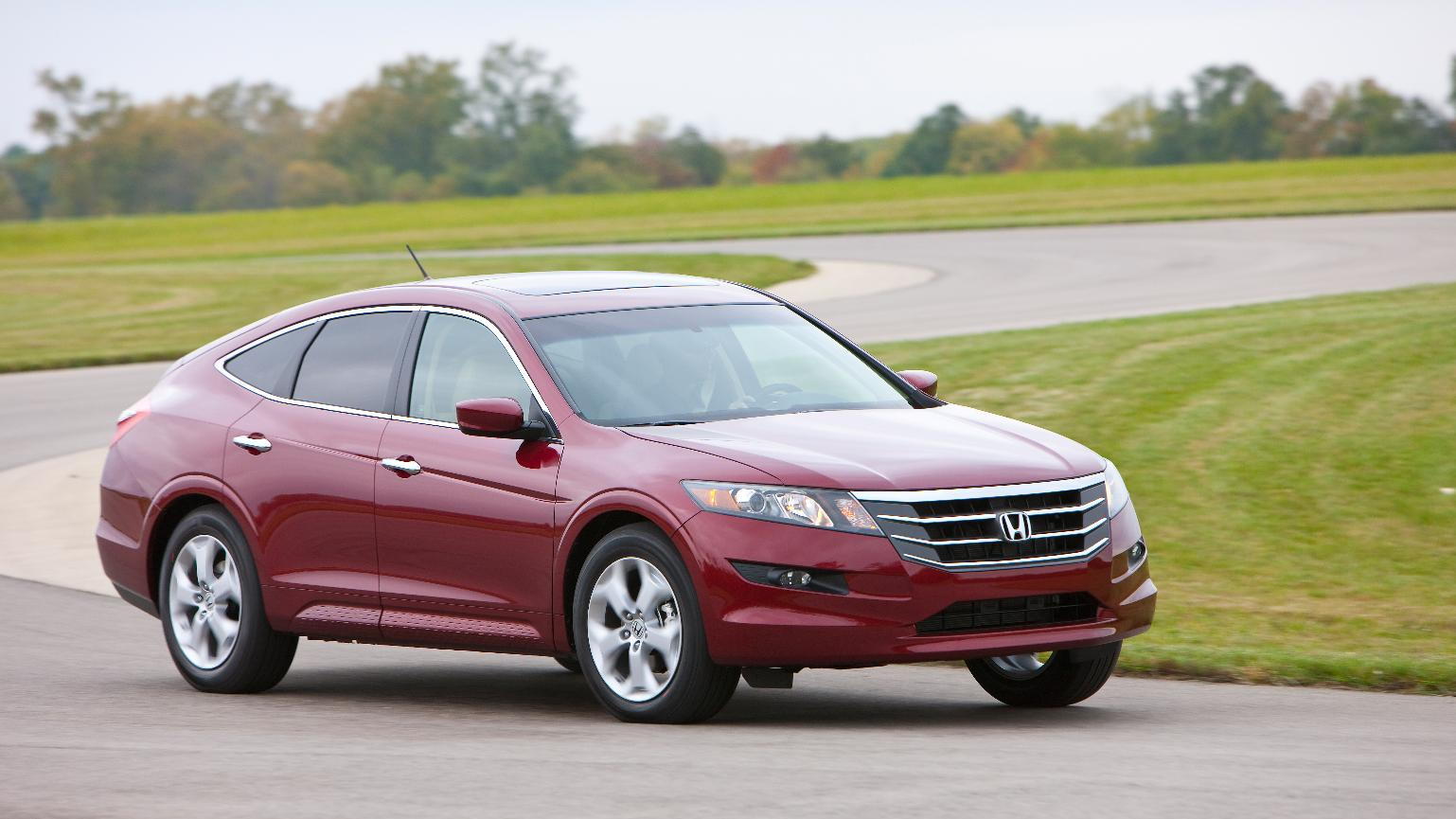 Instead, I’ve come to some degree of understanding for these two highly niche products—with reservations. I’ve also been pleasantly surprised with some of what’s going on with these respective wagons—though you still can’t help but wonder what might’ve been in each case. What follows is a look at both, rather than a comparison, since cross-comparing these Honda/Acura products will happen very rarely in the real-world marketplace.

The Honda Crosstour is anything but cheap. My 4WD EX-L NAV tester ran $36,930; $30,380 is the sticker for the base model with FWD. And while this may be billed as a more useful car than the Accord sedan, the Honda Fit, a car that’s three feet shorter than the Accord Crosstour, and over 1,000 lbs. lighter, has more cubic feet of storage — 51.3 for the Crosstour vs. 57.3 for the Fit, rear seats folded flat in both.

And you could buy two Fits for the price of one Crosstour.

But numbers don’t always tell the whole story. The Crosstour buyer would be rewarded with far greater passenger room, especially for rear seat occupants, where shoulder, hip, and knee room are far more generous in the Crosstour than the Fit. Likewise, the longer Crosstour is a very comfortable highway cruiser; the Fit is jumpier, especially for passengers.

Also, because the Crosstour is so much longer than the Fit, long loads are more easily stowed inside; a trip to the lumber yard was no sweat, and I brought back several eight-foot two-by-fours (that stretched from tailgate to dash, front seat reclined all the way). Another trip to the garden center (see photo) and the Crosstour swallowed eight bags of pine bark mulch and several more of potting soil plus a few pots and assorted supplies. One nifty feature: beneath the cargo floor there’s a tilted, washable plastic bin. It’s big enough to swallow several grocery bags and is deep enough to keep them from shifting during driving.

The Crosstour, happily, isn’t built on a truck chassis. While its six inches of ground clearance is decidedly un-SUV-like, especially vs. competition like the high-riding Subaru Outback (8.7 inches), and that might make it less of a snow plow come winter (Subaru buyers in Vermont will never switch), the all-wheel drive system is really more of a back-up plan anyway. If the front tires slip, power is sent to the rears, but otherwise this is a front driver and that makes it reasonably fuel efficient (17 city/25 highway); we got about 21 mpg on a mix of urban and rural motoring, which included some semi harrowing darting through stop-and-go gridlock in the Bronx.

Speaking of which, the Crosstour does even that sort of dance with reasonable alacrity; you can muscle around double-parked cars and mash the gas to dart into an opening in traffic and response from the 271hp V-6 is decently muscular.  Incidentally, that motor has a cylinder deactivation system to save fuel, and during cruising can run on four or three cylinders. An “ECO” light in the console lets you know the system is working, but otherwise there’s zero sense of increased vibration or shuddering when you get back on the throttle.

Aggressive driving isn’t this big Honda’s forte. Steering feel is a tad sedated, and the tall, 225/60/R18 Michelin Latitude tires mush around corners, scrubbing and howling if you decide to play. The Crosstour is just agile enough, but no sports sedan.

There is a bit of the Teuton in this car though, in the interior, where function is king. The front seats are firm but totally comfortable; the nav system continues to be one of the best in the business, recalculating when the driver zigs instead of zags without delay; and iPod integration is likewise excellent, mirroring the menu organization of the Apple device so it's more intuitive to the owner of said player.

Would that Honda had also carried some of this form-following-function logic to the tail of the Crosstour, where the aft view is decidedly poor (big C pillars are the issue). Get the backup camera option or you’ll ding your Crosstour the first time you visit the supermarket.

There’s an ad on TV that features the Acura ZDX and we see a stylish woman having her head turned by the crossover rolling by. We see the ZDX from the front very briefly, then from the side. Somehow, the woman is floored. But you have to wonder what’s she’s thinking, because the nose of this vehicle is decidedly odd. A friend said the visage of the ZDX reminded him of a Japanese cartoon character’s face, and he wasn’t referring to the endearing Hello Kitty! that little girls love.

Then again from behind the wheel the ZDX is fairly glorious. A tower of buttons wraps around a shield-like center console; dual eyebrows of leather curve off to the left and right, starting at the driver and passenger’s knees, bending around beneath the dash and back around toward the doors. This is a dramatically rendered space, with curves and arcs and intersections of metal and softer fabrics -- Frank Gehry would approve. And, from the outside, looking at the car side-angle on, you could say the same thing — there’s a lot of drama in the surface, and a tautness that looks exciting. You don’t have to love it, but it’s not boring no matter what you think.

But, like the BMW X6 and the Infiniti FX, there’s a question of who exactly needs a tall crossover shaped like a coupe. And with the ZDX that question continues to crop up regardless of what you think of the styling.

For one thing, second-row ingress and egress are egregiously restrictive -- you have to duck very carefully to climb aboard, and unless you’re under 5’ 10” there’s no way you’re riding back here. Unlike with the Crosstour, you can’t argue that this is a well packaged vehicle for utility: there’s less rear seat legroom than in the Honda Fit, a mere 31.1 inches, and the cargo hold, even with the rear seats down, is still two cubic feet short of what that tiny Fit offers. Now recall that the ZDX is based on the MDX, which offers nearly 30 cubic feet more cargo room than the ZDX and seats seven, and you just have to scratch your head in wonder.

On the plus side, again because like the Crosstour this is a long hatchback, you can make use of that length and carry home eight-foot pieces of lumber (see photo).

The ZDX is styled as if it were a tall sports sedan. This isn’t quite what you’re getting, and unlike, say, the TL, this Acura rides high and is about 500 lbs. heavier.

The roughly 4,400 lb. (depending on the model) ZDX can feel somewhat agile, especially in sport mode — our ZDX came with the Advance package, which includes an adjustable suspension that uses a magnetic-fluid damper system to instantly firm the suspension as a computer senses increased yaw or pitch. It also comes with Super Handling all-wheel drive, one of the better adaptive all-wheel systems on the market, because it doesn’t just measure slip but understeer; if the car begins to “push” wide of an intended apex it sends more juice to the outside rear wheel, jamming that big butt around so you stay on your line.

But no amount of electronic hocus pocus can make a car this tall corner like a lighter vehicle that sits lower. Yes the six-speed, 300hp V-6 combo is impressive for its freely revving character, quick upshifting and willingness to hold a high revving gear for more chassis control -- or upshift to the point of lugging the engine if you’re driving on slippery surfaces.

But this only gets you so far. You can have a much sportier crossover in the muscular Infiniti FX50 or a more engaging overall package in the BMW X6, with superior legroom and cargo room in the BMW. And given that our tester Acura ran to $56,045, an Audi Q7 isn’t out of the question as competition, since that crossover at least offers more utility, all-wheel drive, and not especially horrendous fuel economy for a big vehicle (14 city/19 highway versus 16 city/ 23 highway for the Acura).

The Crosstour makes some sense.

There’s a Honda-only buyer who won’t buy a true crossover, like the CR-V or the quirky Element. So they’ll buy a Crosstour, a more traditional sedan with a bit more utility, a good ride that’s less numb than much of the competition.

The ZDX, meanwhile, is in a worse spot than the Crosstour, in part because Acura as a brand doesn’t have a firm fan base. Where BMW can build smash-roofed crossovers because it has built its brand on the perennially strong selling 3-series (BMW’s core product, mind you, is also very inexpensive relative to the rest of its offerings), Acura’s following is far softer.

For over a decade that’s been the way with Acura, ever since the Legend and, later, Integra marques were snuffed out. These were cars with passionate customers; these were cars built from a sporting, aggressive, playful mindset. Today, though, Acura can’t decide whether to chase pure luxury, a la Lexus, or performance, like BMW.

The game plan clearly exists, however.

Audi is following the BMW angle with increasing sales of its A3/A4, and even Infiniti, which through Q1 2010 matched Acura’s sales on the car side (with two, rather than three models) has the strong selling, purpose-built G series, probably still the best Infiniti there is.

But instead of an Acura built to foster future Acura sales, we get the rebadged European Honda Accord, the TSX. In what way does this car match the BMW 3-series? None, save the $30k-ish price.

Unless and until Acura commits to killing it with its base car it cannot expect great success with niche models like the ZDX. You have to start with the base of the pyramid before you can add small adornments.