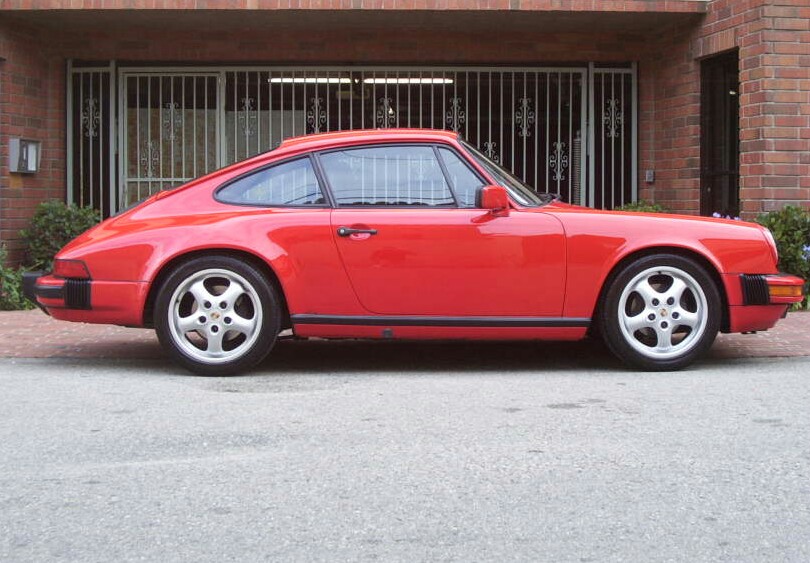 Believe it or not, there are still some who view the automobile as it was originally intended, a more convenient way to get from one place to another.

Having a car meant you didn't have to chase down the horse and hitch him to the buggy so the wife could go to town. These like-minded folks today still view their vehicle as simply a way to go shopping or to work without having to plan their day around public transportation schedules.

I understand the 4-door sedan mentality however, and fortunately for people like me, a designer stepped in along the way and body styles were born. Then came chrome rims, headers, dual exhaust, drop the front end and metal flake paint jobs. People were making statements with their vehicles and designs and accessories were stirring excitement in us.

I liked the rims on one car, the ride height on another and the body style on yet another one. ButI couldn't seem to get it all in one package. That changed the day Porsche rolled out the 3.0 Carerra coupe, black with black interior in 1986.

When I first saw that car and thought, "I couldn't have said it better myself."

Here it was. An awesome looking high performance machine that came to life on canyon roads and hit the streets with style on Friday nights. The car was so attractive the valets let me park right in front of the club. A gleaming billboard advertisement that said this is all about class.

When I was in that car I was where I wanted to be. If traffic was at a stand still it didn't bother me. I was in my Carrera. And when things opened up, it was 3rd gear and one hole shot after another. The hardest thing to do was keeping it under 90 mph.

The first six months I had the car I didn't listen to the radio or play a CD. I didn't want anything to intrude on the sound of that 3-liter Carrera engine. Saturdays were the best. I'd roll the coupe out of the car port around 8 in the morning and shine it up to he point where the neighbors had to close their blinds from the glare. Then I'd take a 30-minute cruise up the coast highway to Topanga Canyon Road in Malibu.

During the week Topanga Canyon was a commuter artery. But on Saturdays it was my playground. I'd sit at the base of the canyon with the engine at idle and wait until I had at least 1 minute of clear road, then slide it into first gear and get with it.

This was my road course. I knew every turn, every bump and had the shift points wired to a tee. The course had esses, sweepers and straight-aways. It was a drivers' course and I owned it.

Or so I thought. Then one day I had to hearken to the reality, "There's always someone faster." I don't know where that kid came from or what he had in that Honda, but as good as I can drive, and I drive really good, I couldn't shake him. I pulled every tick out of the book. Late braking, I mean really late to the point where I was scaring myself. Then I'd get out of the corner hard and check the rear view and he was still right there on my tail. I worked the 3-liter engine in the power band, almost to the red line and dialed every line with precision, but all to no avail.

Finally, halfway to the summit I had to let him by. He shot past me like a rocket and in a matter of seconds was completely out of sight.

A few minutes later I pulled off at the Summit and let the adrenaline pass and got my heart rate back to normal.

Yeah, I got beat--but I didn't lose, because now I get to drive this beautiful example of German engineering back down the canyon, onto the coast highway and go grab some breakfast.

Might even find a parking spot right in front of the restaurant and add a touch of class to the whole affair.--Bill Machin