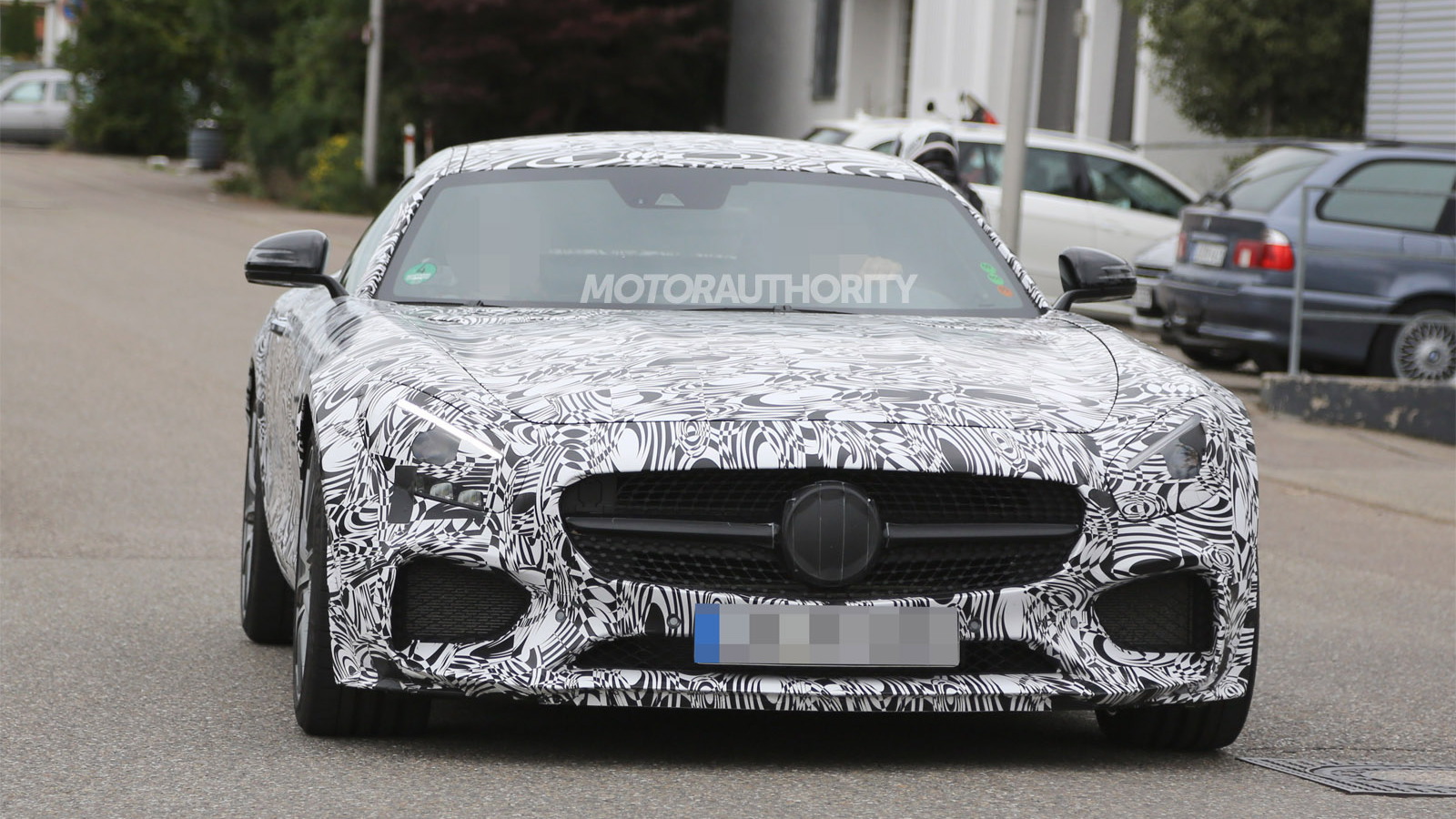 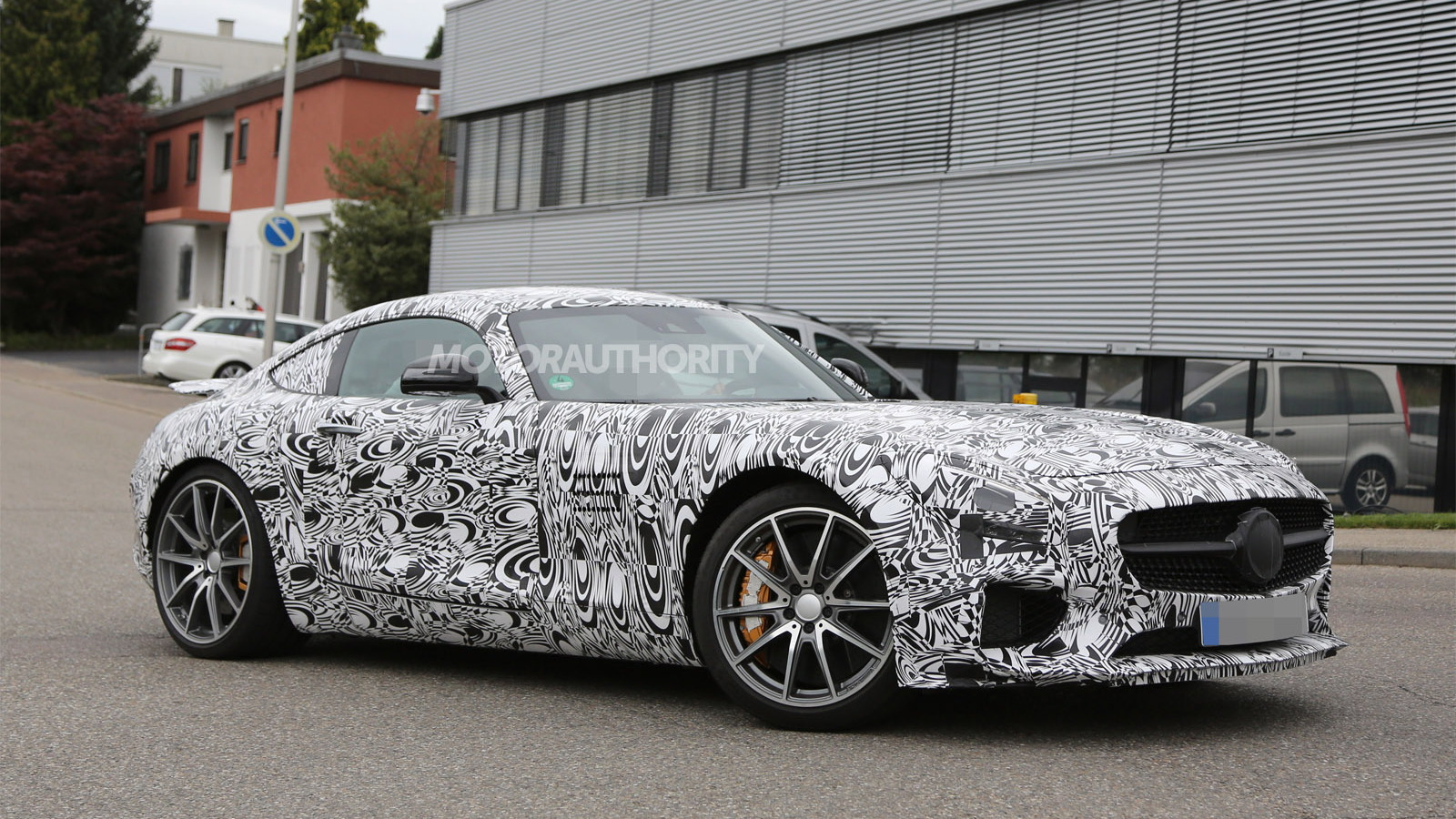 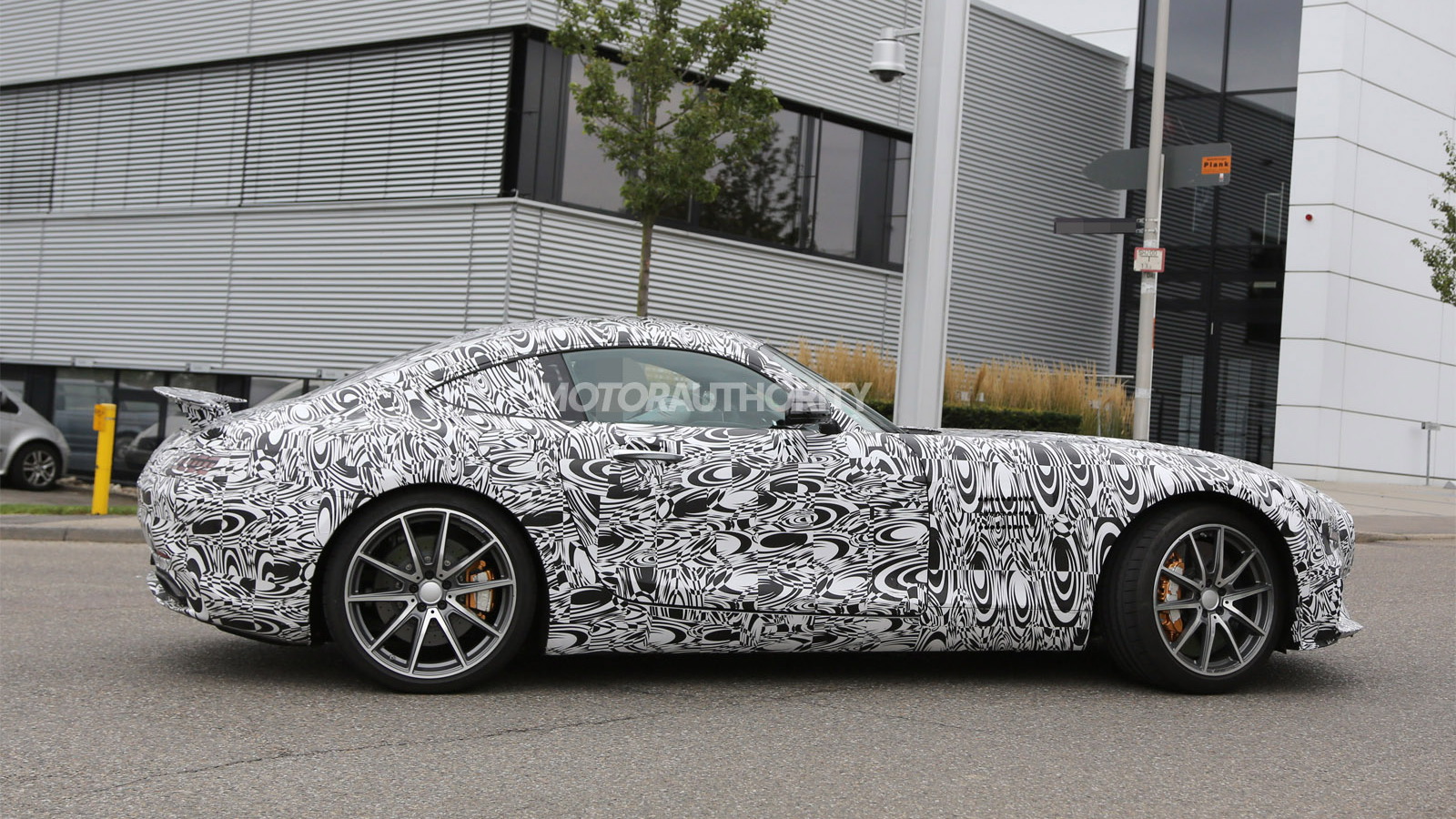 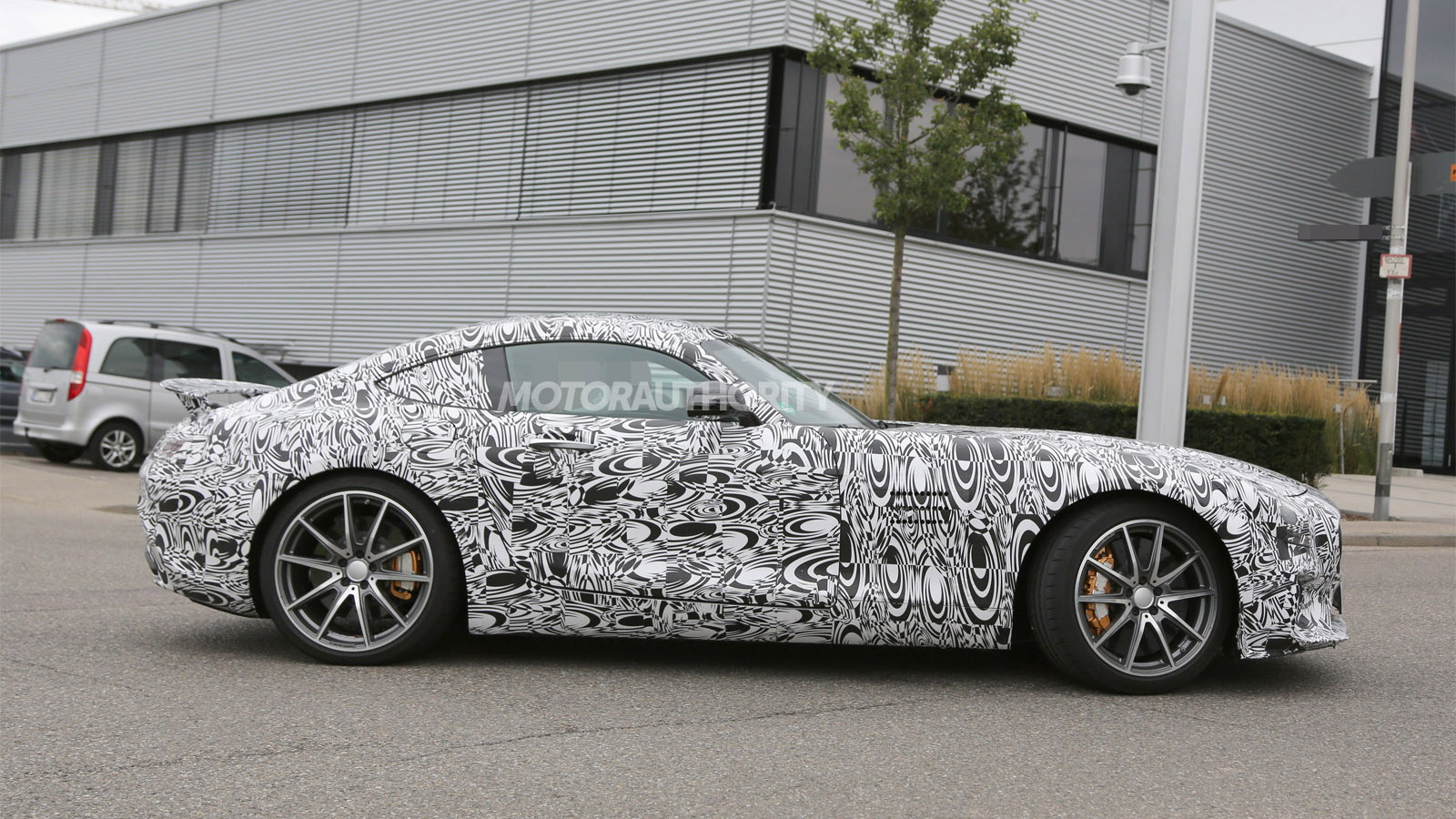 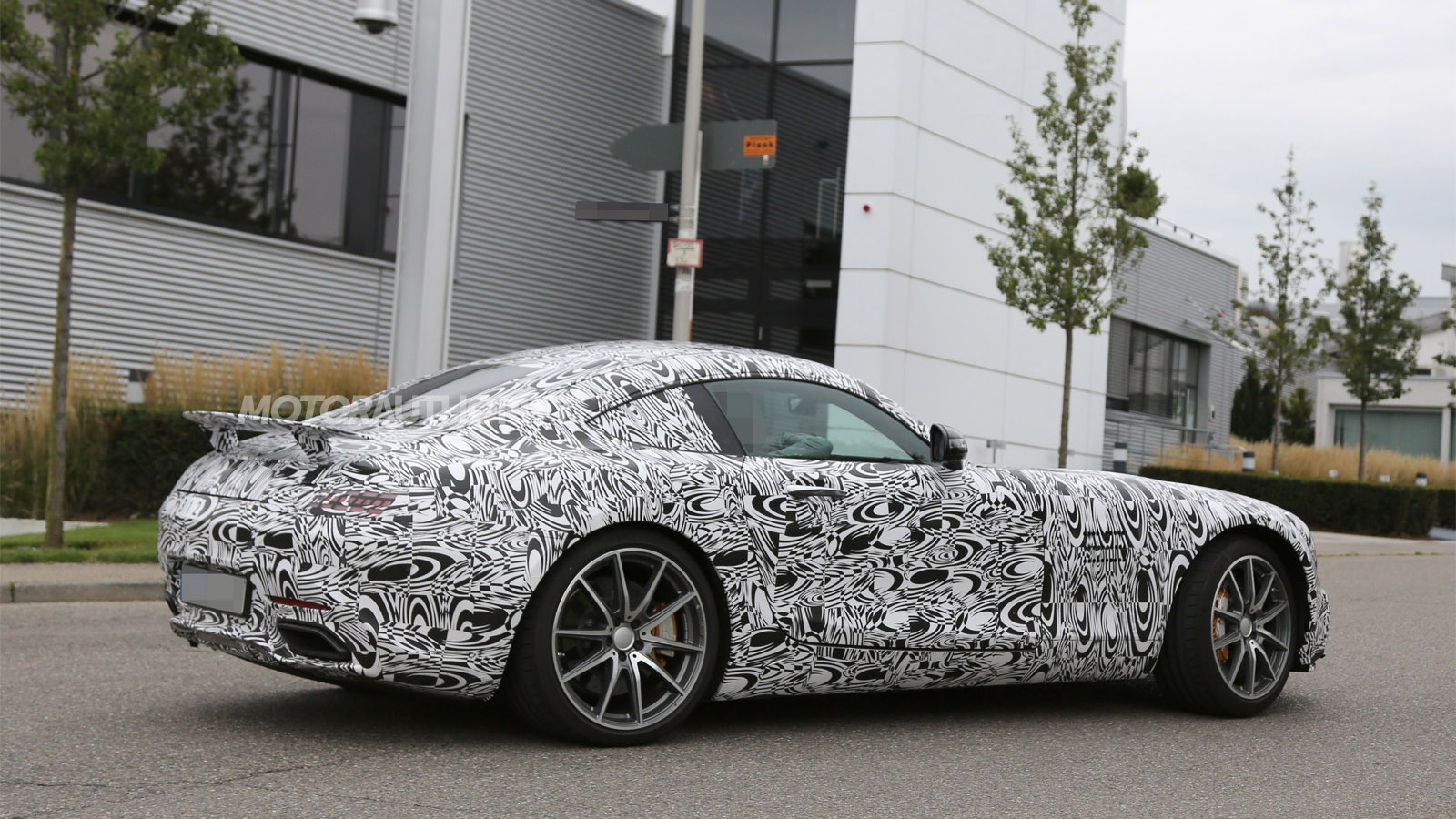 61
photos
The Mercedes-AMG GT sports car is nearing its unveiling, but as testing draws to a close, the final spy shots are emerging. This time around, we have a visual of a new, larger rear spoiler. It's a bit early for a Black Series, so this may be a separate upgrade package, possibly for the sportier GTS trim (GT is the base trim). Whatever it is, it looks sharp.

Talk of a new sports car built along the lines of the Mercedes SLS AMG dates back all the way to 2011, with numerous reports on the car, which was previously thought to be called an SLC AMG, emerging over the years. A very early test mule based on the SLS was spotted in 2012, though plans for that car were shelved on the basis it would be too expensive compared to its intended rivals, namely, the Porsche 911, Audi R8 and even Nissan's GT-R.

Mercedes went back to the drawing board and devised a new sports car, one that shares little with the SLS. The new car will target younger buyers than those of the retro-inspired SLS, and its styling, which already appears much more modern than that of the SLS, will reflect that.

It will have traditional doors (i.e. no gullwing design) and its engine, AMG's new M178 twin-turbo 4.0-liter V-8, mounted up front. It’s not clear if all-wheel drive will be offered, but given AMG’s new-found love of all-wheel-drive cars it’s entirely possible. Another indication that all-wheel drive may at least be offered is the sighting of a Nissan GT-R testing alongside in some of the earlier shots.

We do know it will be significantly smaller than the SLS, as the spy shots confirm, meaning a lighter curb weight. A new aluminum spaceframe structure has been developed, which should help keep weight at or below 3,300 pounds. The SLS, which also features aluminum construction, weighs more than 3,600 pounds.

A new twin-turbo 4.0-liter V-8 is the powerplant, and at least two different power outputs will be offered initially, as evidenced by the different exhaust tips on the prototypes. The more potent, the GTS, should offer about 503 horsepower. The base GT is expected to offer 455 hp. AMG’s seven-speed SPEEDSHIFT dual-clutch ‘box, meanwhile, will handle gear changes. It will be mounted at the rear to help even out the weight distribution. Note, the 4.0-liter engine will feature in the new C63 AMG and eventually become the sole engine for AMG's V-8 models.

Inside the Mercedes-AMG GT, things will be as plush as any other high-end Mercedes offering. The cabin design follows the aviation theme typical of the German automaker's sports cars, with the dash stretching wide like the wing of a plane and the air vents resembling a jet’s turbines.

Mercedes will pull the covers off the GT sometime next month, ahead of an official world debut at the 2014 Paris Auto Show in early October. Sales in the U.S. are expected to commence by next spring.