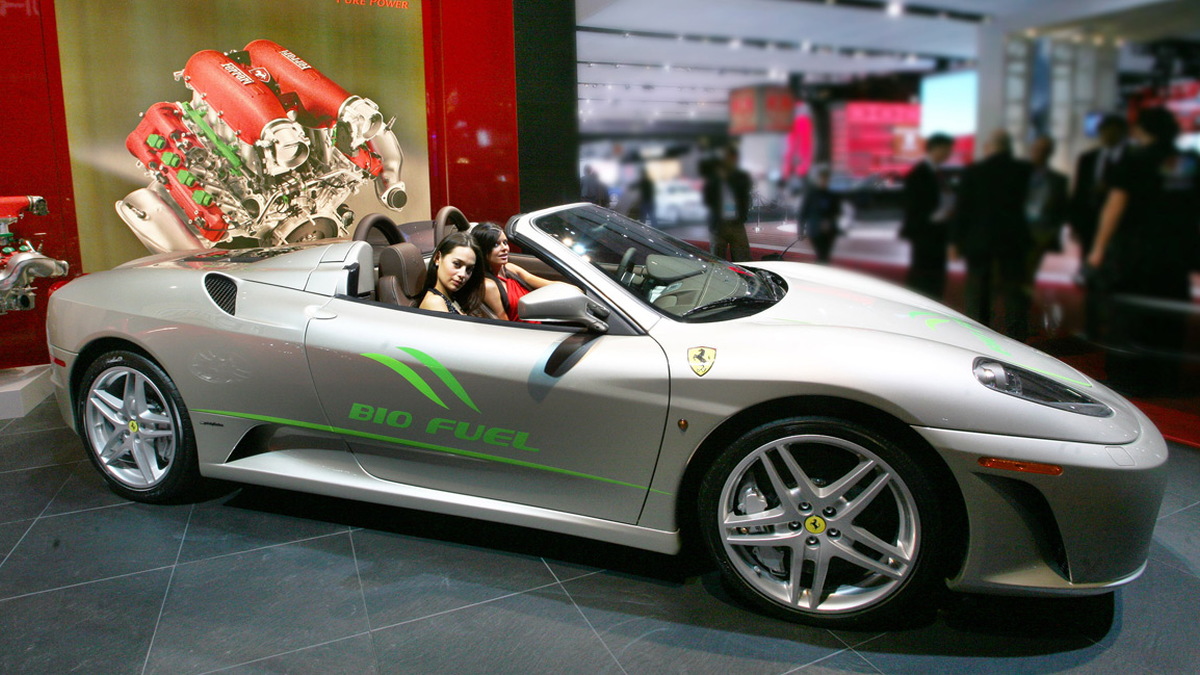 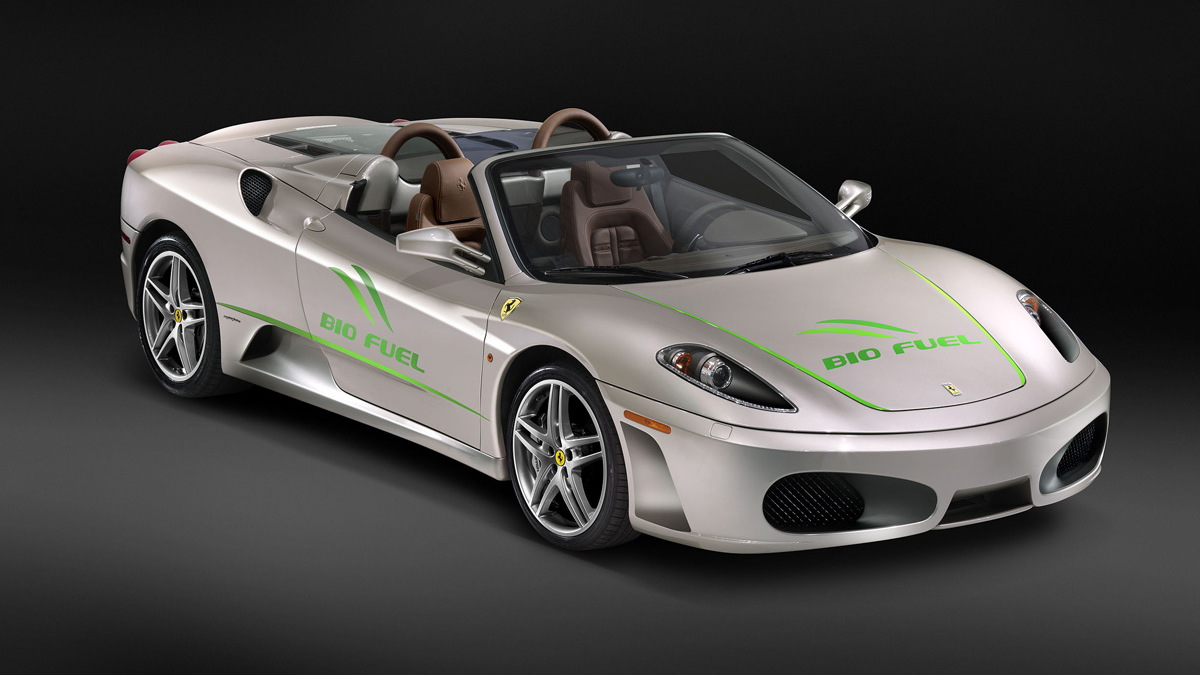 3
photos
Although Ferrari's concept is not due to drop until later today, news of it has already hit the streets, perhaps because of the hoopla surrounding GM's investment in Coskata, Inc.'s garbage-derived ethanol initiative. Whatever the reason, the fact is that the Prancing Horse is adding some green to its racing red with a F430 Spider Bio Fuel concept running on E85. Upping power by two percent while decreasing fuel consumption five percent, the new car will be targeted first at California.

Ten percent of Ferrari's worldwide sales come from California, and the state has some of the toughest emissions laws in the world, so it's obvious why Ferrari would target the Golden State first. The only problem is that E85 is not popular in California - and Ferraris aren't popular where E85 is. So production of the F430 Spider Bio Fuel (or any other E85-powered Ferrari) will have to wait until the two markets converge, or at least overlap enough to make the venture financially feasible.

The already speedy F430 Spider generates 490hp in petrol trim, and with E85 gets a bump to 500hp. Torque goes up four percent to 483Nm, while fuel consumption decreases by five percent from 17L/100km to 16.15L/100km (from 13.8mpg to 14.5mpg). How exactly the Ferrari gets more power out of less fuel when the fuel itself has less energy is a mystery - unless the wording of the info release thus far is simply backwards, and fuel consumption has worsened by five percent to 17.85L/100km (13.2mpg). Either way, buying stock in an ethanol plant might be a good idea. But for getting a non-fossil fuel ride with Ferrari looks, speed and grace? That's priceless.

Detroit (USA), 14th January 2008 – Ferrari has brought two models – the 430 Scuderia and the 599 GTB Fiorano - to the 2008 North American International Auto Show in Detroit. Also on the stand this year, however, is a biofuel-powered technological demonstration prototype which uses the F430 Spider as a base.

Ferrari, which last year celebrated its 60th anniversary, had a very positive 2007, continuing the upward trend of the last few years. Ferrari delivered over 6,400 cars to their owners in 2007, an increase of around 14% on 2006. There was a particularly significant leap in sales on new markets such as Asia Pacific and the Middle East where growth was impressive at 50% and 32% respectively. A total of 177 cars were delivered in China too. Our operating result also reached 15% of turnover.

Ferrari has chosen Detroit as the venue for the presentation at a biofuel-powered F430 Spider in recognition of growing interest in North America in alternative sources of energy.

The development of an engine powered by the biofuel E85 comes as part of a research and development program announced during the Technological Innovation Conference held at Maranello last June as part of our 60th Anniversary Celebrations. On that particular occasion, Ferrari also unveiled projects focused on improving the energy of the whole car which would in turn lower fuel consumption and emissions levels. The ultimate aim being, of course, to cut the latter by 40% by 2012.

The Ferrari F430 Spider Biofuel uses an 85% ethanol mix and was developed with using experience gleaned in competition. In fact, Formula 1’s technical regulations demand that petrol (gasoline) with 5.75% biomass-derived content must be used, while the FIA GT and American Le Mans Series (ALMS), both of which were dominated by the F430 GT2 in 2007, use fuels with 10% ethanol. Furthermore, E10 biofuels will be employed in the next A1GP Championship which Ferrari will be supplying with V8 engines.

Once again, in fact, the track has proved an excellent testing ground for innovative solutions which, if successful, can then be passed on to production cars. Such is the efficiency of the transfer of track technology to road cars at Maranello that all of the Prancing Horse’s cars can already use up to 10% ethanol without any modification whatsoever.

By developing this technological demonstration prototype however, Ferrari has proved category that it can offer the technological solutions demanded by the market demands without impinging on the distinctly sporty, high performance character and supreme driving pleasure of the unique cars it builds at Maranello.

In the case of the F430 Spider Biofuel, certain modifications were made to the fuel feed system and most importantly to the engine CPU to allow the engine use E85. Developing the CPU, two fuels (Flex Fuel) can be used by the engine with the same compression ratio. All of the other technical characteristics have remained unchanged with respect to a standard production engine, however. The use of this type of biofuel and the modifications made have resulted in a significant increase in maximum power output (+ 10 hp at the same rpm) and torque (+ 4%) yet overall weight was unchanged. The advantages to the environment translate too into a 5% drop in CO2 emissions.

Also on the stand at Detroit is the 430 Scuderia, Ferrari’s new exceptionally sporty berlinetta which, in this case, boasts a Avio Met livery with Grey Alcantara interiors. It is flanked by the 599 GTB Fiorano with a Rosso Corsa livery and Charcoal interiors which brilliantly underscore the sporty heart of this the most high performance production V12 berlinetta ever built at Maranello. Both cars also feature Brembo carbon-ceramic material (CCM) brakes which are now offered as standard on the entire Prancing Horse range.

Braking systems with carbon-ceramic material disks offer a host of benefits and have become a must-have piece of technology for the kind of very high performance cars built by the Prancing Horse.