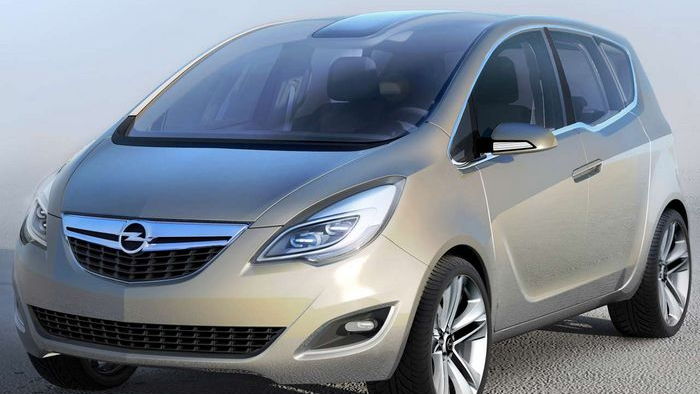 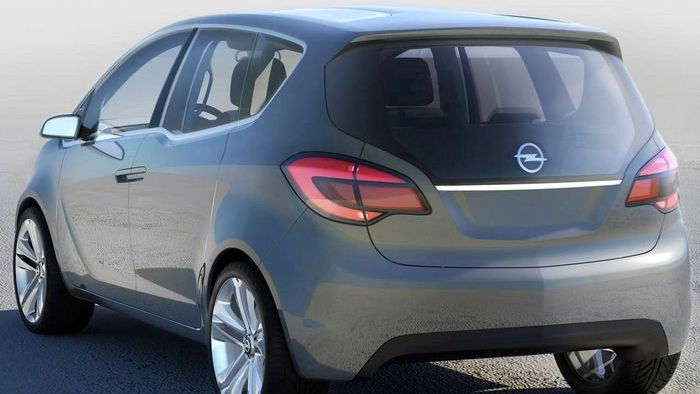 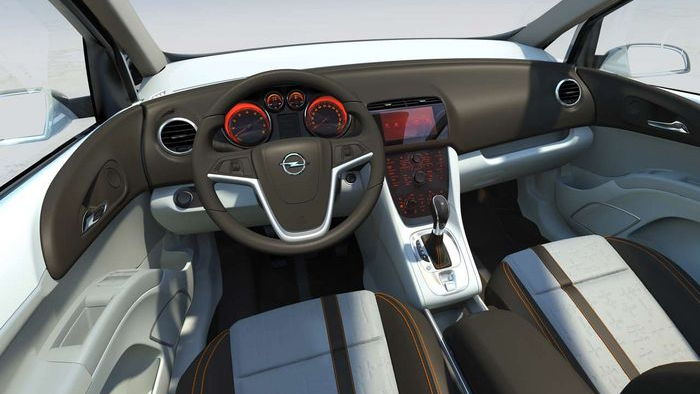 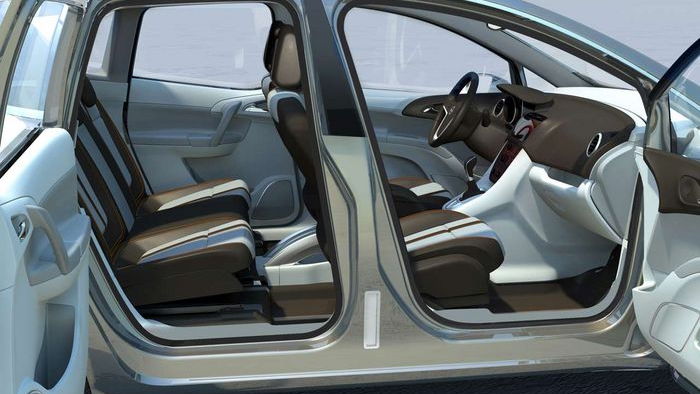 5
photos
Updated: A denizen of the Romanian Astra forums has made public several medium-resolution shots of the upcoming Opel Meriva concept bound for Geneva. While no new information accompanies the leak, the vehicle is shown from nearly every angle, and the interior is laid out for display as well. Click through to enjoy the early views.

Original: Earlier this month GM released a rough sketch of what was to be a new concept car for Opel appearing at next month’s Geneva Motor Show. Officials have since followed up the original teaser with a second image of the car plus details about some of the new features of the upcoming concept. The design is meant to showcase new technologies we can expect to see in the MPV market in coming years and includes some interesting features such as rear-hinged doors, a U-shaped windshield and seven seater capacity in a compact body.

The Meriva is an important model for GM globally. The current model is sold throughout Europe and it even reaches some parts of South America where it’s sold as a Chevrolet. Sharing its underpinnings with the Corsa subcompact, the new Meriva could potentially be sold in other markets including the U.S. and South-East Asia. GM has confirmed that it will produce the next-gen Corsa model in North America so it’s possible other variants may come as well.

With the dynamically styled Meriva Concept, Opel presents the next level of monocab flexibility at the International Motor Show in Geneva (March 6 – 16, 2008). The concept car features rear-hinged rear doors on both sides of the car called FlexDoors. While the front doors are conventionally designed with front hinges, the rear doors swing open towards the back of the car. Another feature of the family-oriented Meriva Concept is that the front and rear doors can open independently of each other. Rear-hinged rear doors already on the market can only be opened after the front door has been opened, which severely limits their practicality.

• Greater functionality: entering and exiting the vehicle is more convenient as the rear doors open to a 90-degree angle, creating a much wider aperture than standard car doors. Thanks to the high roofline, rear passengers also have more headroom when getting in and out of the car. The interior is much more accessible, so stowing a briefcase behind the front seat, for instance, is considerably easier.

• Higher level of safety: securing children in the back seats is much easier. The

rear-hinged rear doors also improve control over children exiting the car, as they can be better seen from the different seating positions. The “safety zone” created between both doors also makes it much more difficult for them to step out into traffic than with conventional doors.

• More style: entering and exiting the rear of the vehicle not only looks cool and elegant, but also feels much more natural.

FlexDoors smooth operation is backed up by an array of patented innovations developed by GM/Opel engineers. A safety system ensures the doors can only be opened from the inside or outside when there is no risk to the passengers. The Meriva Concept also features an automatic electronic child lock, which supplements the conventional mechanical system. The concept car also has B-pillars not only for independent opening but also for side-impact safety reasons.

The Meriva Concept’s design is distinguished by its attractive combination of practicality and spaciousness with very dynamic and cool styling. The concept car’s distinctive window line, arched roof, wide track and impressively sculpted body give a good indication of what is to be expected from future Opel production monocabs.

“The Meriva Concept clearly illustrates how our new Opel design language can be adapted to create bold, fresh design solutions for the monocab segment” says Mark Adams, Vice President of Design, General Motors Europe. Especially eye-catching is the dynamic “wave” of the window line just behind the B-pillars, which provides an excellent all-round view for rear passengers. This also enabled designers to create a dynamic and unique silhouette and still provide good visibility for children in the rear. The body also boasts the distinctive “blade” bodyside form, which was a design element of the GTC Coupé and Flextreme. Another feature is the U-shaped windshield, which stretches up and back over the rear passengers’ heads. Rear section elements – in particular the rear lights – echo the Insignia, Opel’s new upper mid-size class car due to be unveiled in the summer. The monocab’s roof slopes gently downward towards the rear, underlining its dynamic character.

“The FlexDoors concept is a logical enhancement of our monocabs’ flexibility,” explains Alain Visser, Chief Marketing Officer, General Motors Europe. “With the Zafira’s Flex7® seating system and the Meriva’s FlexSpace concept, we took on a similar pioneering role in interior flexibility.” Opel is enjoying great success with its monocab designs: in 2007, almost 335,000 Zafira and Meriva models were sold. And with the new Agila, monocab expert Opel now also offers an entry-level monocab in the mini-car segment. Every fifth Opel model sold today is a monocab, while in the total market it is just every eighth car.