';
It’s been known since the outset that the Bugatti Veyron would be limited to just 300 units, and from its early days there has been talk about a special run-out model. Last month reports emerged claiming that Bugatti is already working on a Veyron successor, however a leaked memo alleged to be an official document suggests that before its arrival there will be a special edition of the Veyron simply called the ‘GT’.

The memo claims the car will also be fitted with upgraded carbon-ceramic brakes, a new electronic stability program, and a revised active aerodynamics package. With the upgrades on board the Veyron GT will sprint from 0-62mph (100km/h) in just 2.4 seconds and will go back to zero in just 2.2 seconds.

The expected launch date is scheduled for the Geneva Motor Show in March next year. Importantly, the memo also states that current Veyron owners will be able to upgrade their vehicles to GT status.

While the concept of an even faster Veyron is exciting, Bugatti is yet to release an official statement on the car so it could all just be rumor.

In a previous interview with Autocar, Bugatti CEO Franz-Josef Paefgen confirmed the launch of a Veyron successor sometime in 2011 or 2012. In another interesting twist, the Bugatti boss also hinted that the company could take the new car racing, an activity that has been completely ruled out with the Veyron. What series or races the company might be considering are unknown, but Le Mans and similar activities might carry the prestige and notoriety that would suit Bugatti’s image. 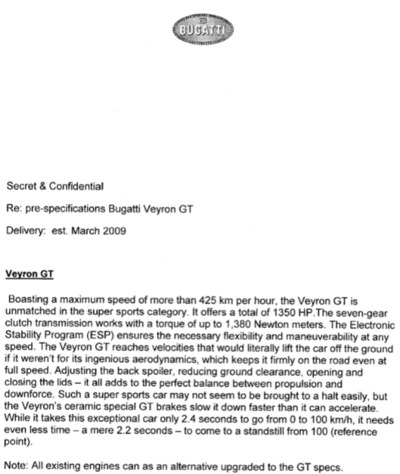