The sixth-generation Ford Motor Company [NYSE:F] Mustang has now been on sale for a couple of years, and those owners used to the performance now have the option of some power upgrade kits offered direct from the factory—i.e. they won’t hurt the warranty.

The power upgrade kits have been developed by Ford Performance for the Mustang’s EcoBoost and GT models.

The Mustang EcoBoost’s kit sees output rise to 335 horsepower and 390 pound-feet of torque, up from a stock 310 hp and 320 lb-ft. That’s an impressive level of torque considering this is an inline-4 we’re talking about, and the improvements aren’t only at the top end. For example, the kit, which includes better breathing and ECU recalibration, boasts an average gain of 40 hp and 60 lb-ft from a wide band ranging from 2,500 to 5,000 rpm. 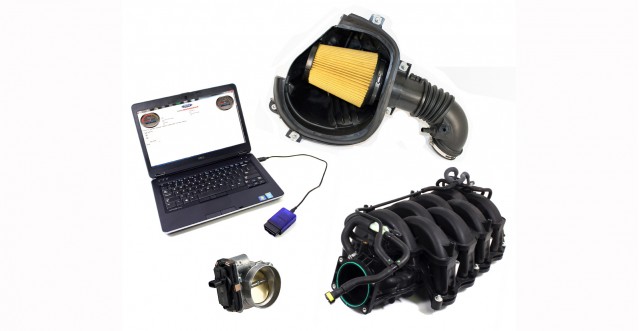 Mustang GT owners have three different kits to choose from. The first features a new ECU calibration and high-flow air filter, delivering peak gains of 13 hp and 16 lb-ft over the standard 435 hp and 400 lb-ft. The second includes a cold air intake, an 87-millimeter throttle body, and an intake adapter borrowed from the Shelby GT350 that helps liberate an additional 21 hp and 24 lb-ft over the stock V-8. The third alters the redline, moving it to 7,500 rpm, and liberating 37 hp and 5 lb-ft over the stock V-8, meaning a stout 472 hp and 405 lb-ft.

The kits are designed for cars equipped with either manual or automatic transmissions. Furthermore, in the automatic cars the transmissions gets optimized performance shift schedules, and in Mustang GTs equipped with a manual transmission there’s a special no-lift-shift feature that allows gears to be shifted without letting off the gas.

The announcement comes at a time when Mustang sales are cooling, likely in anticipation of the updated model due in 2017 as a 2018 model. Mustang sales in September declined 32 percent compared to the previous year, prompting Ford to cease production for a week to reduce inventories. The drop saw the Chevrolet Camaro overtake the Mustang in the sales race for the first time since October 2014, though the Camaro was aided by more aggressive incentives, Bloomberg reports.