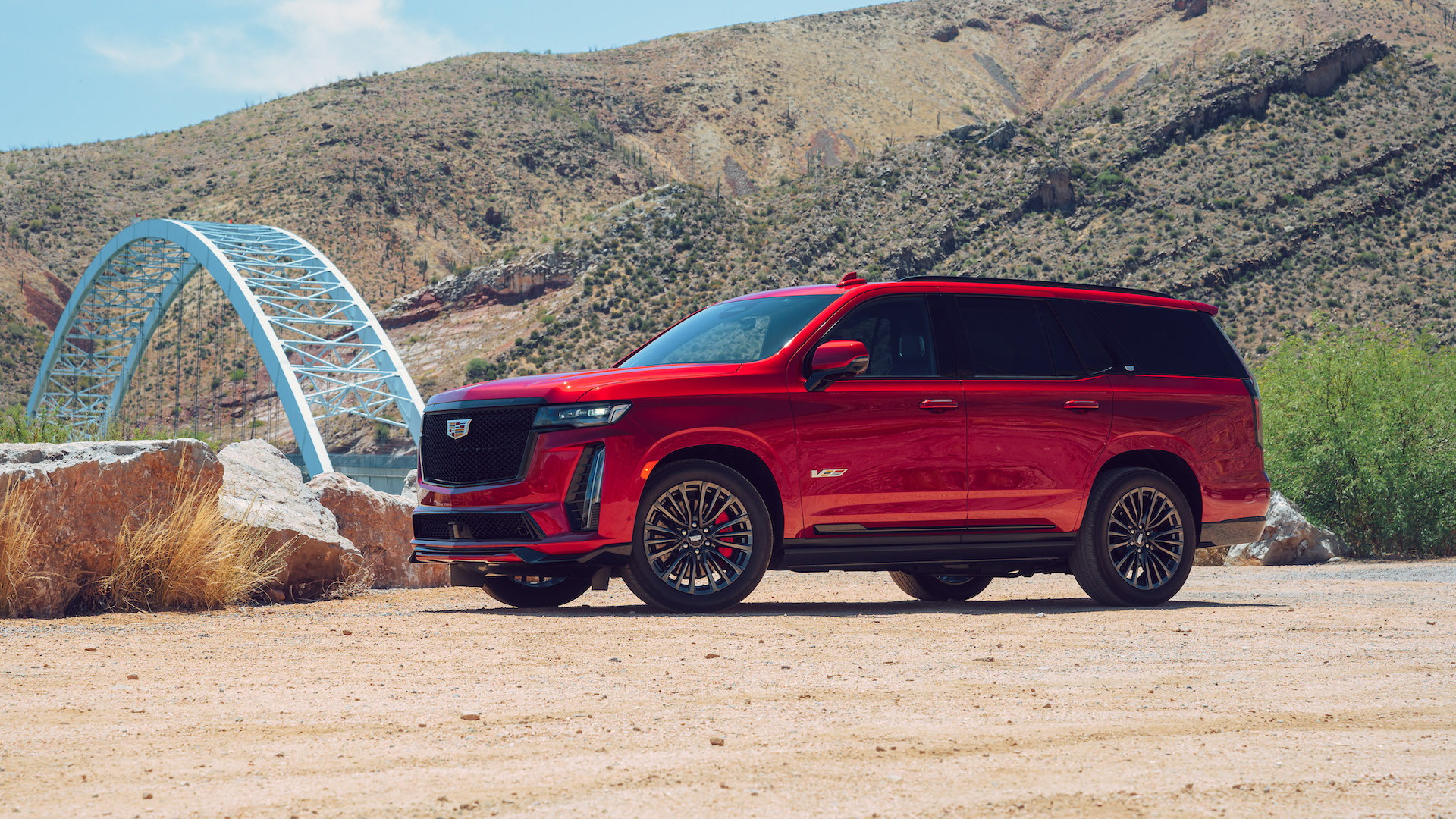 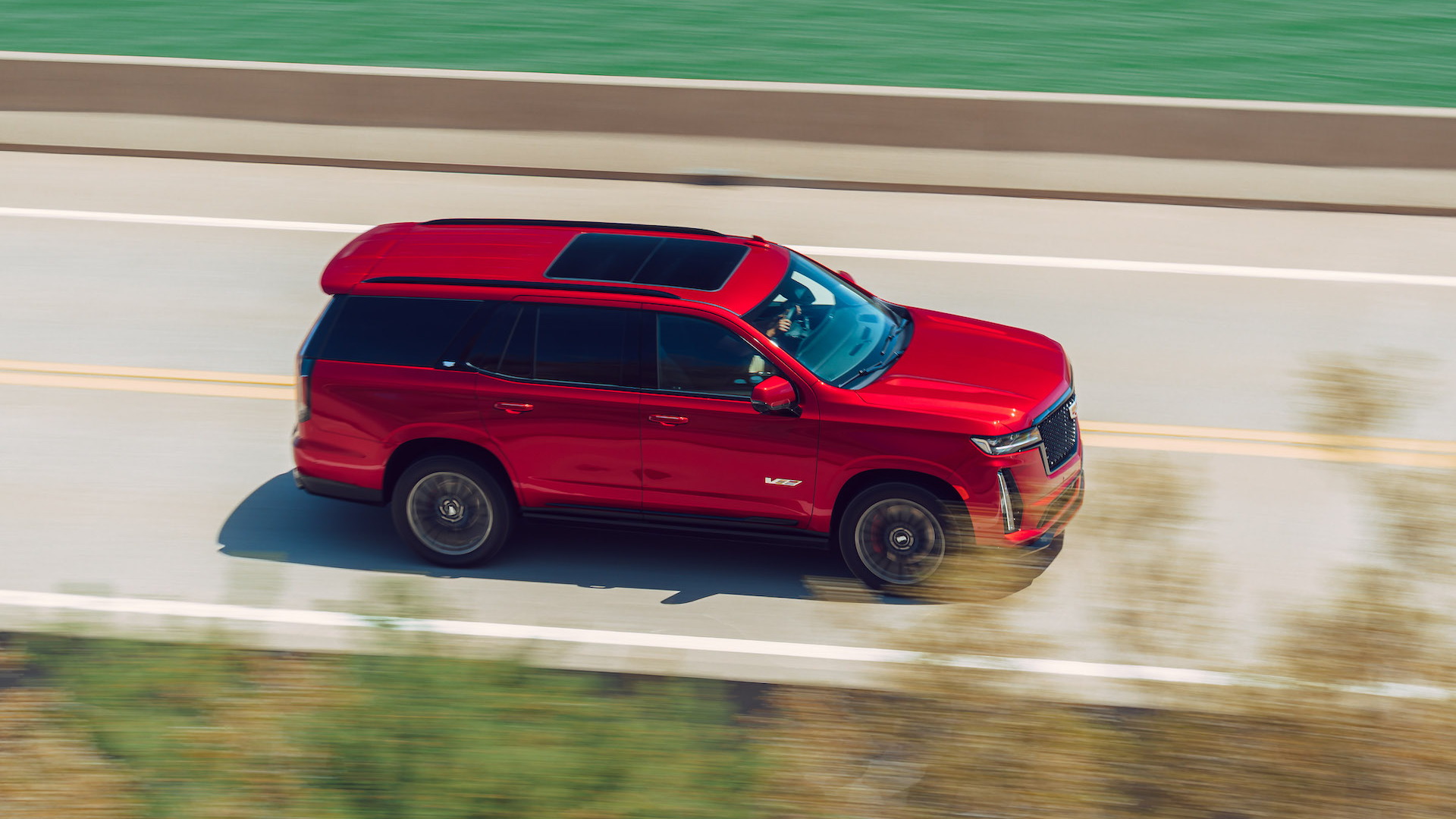 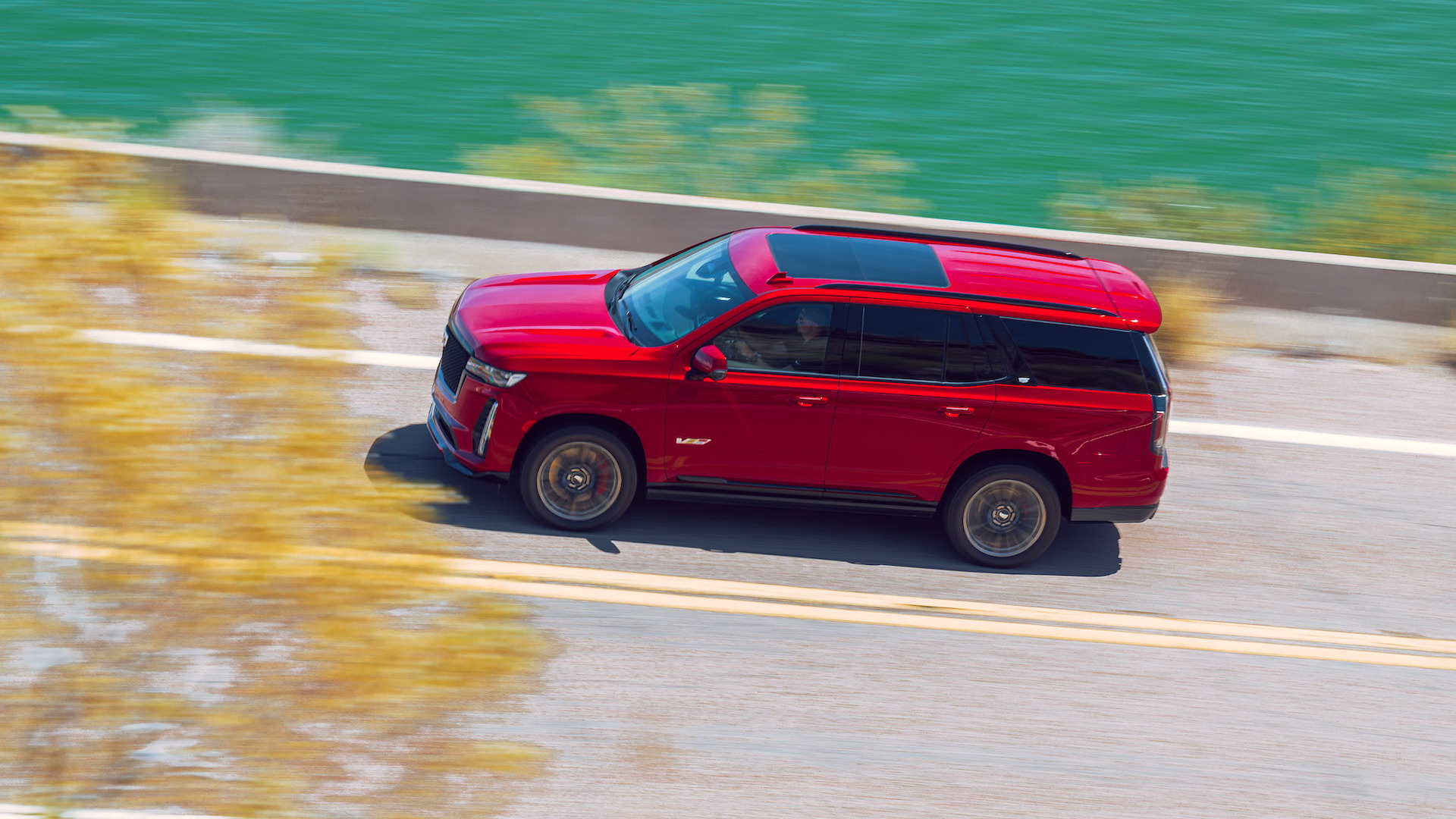 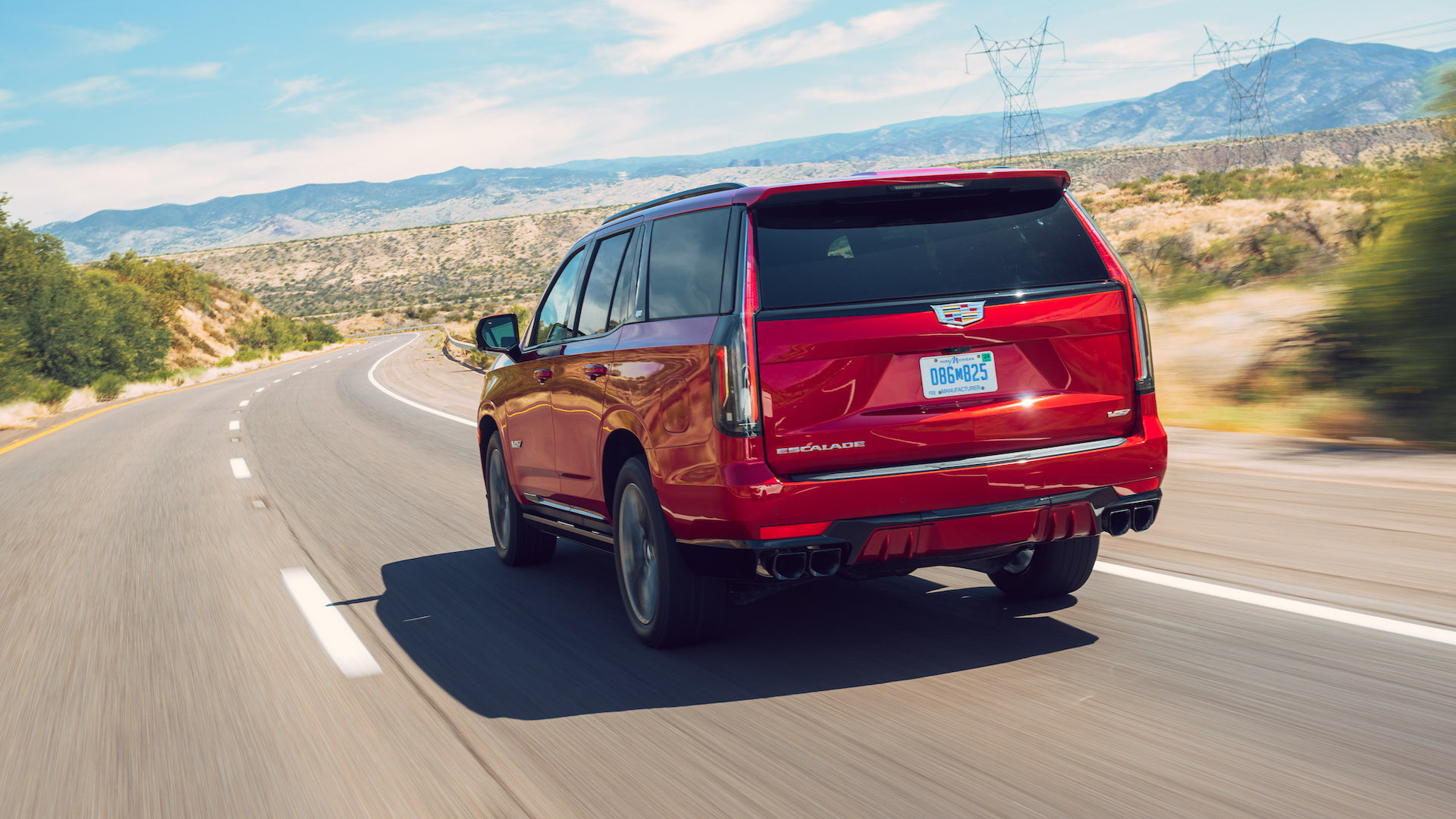 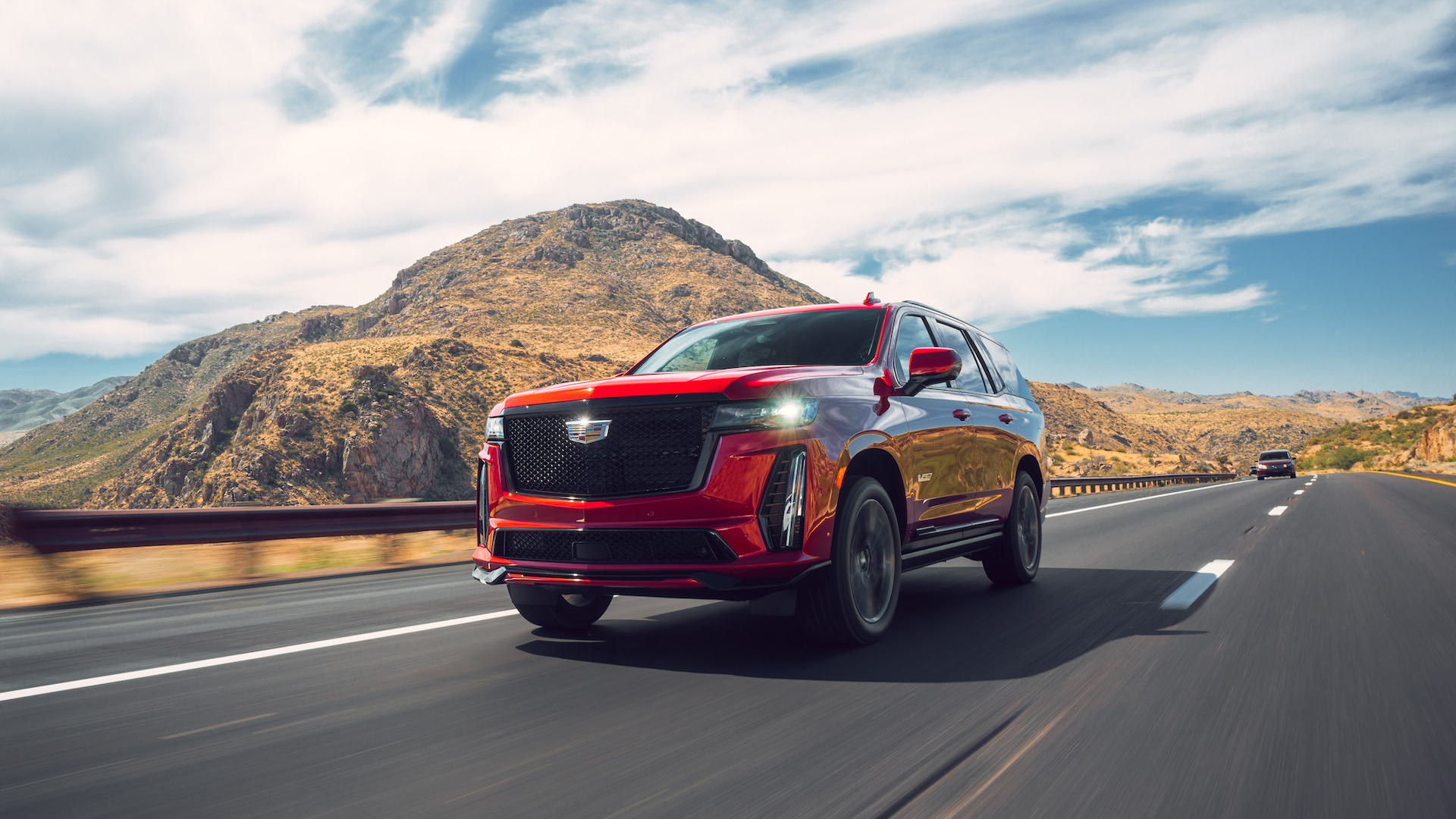 The main difference between the Escalade-V and other Escalades lurks under the hood. Rather than a 420-hp 6.2-liter V-8, the V boasts a supercharged 6.2-liter V-8. It’s a version of the engine that makes 668 hp in the CT5-V Blackwing, but it’s upgraded to handle the extra size and weight of a full-size body-on-frame SUV. The main difference is a 2.65-liter supercharger instead of the Blackwing’s 1.7-liter version. The larger supercharger, which spins up 10 psi of boost, accounts for the increase to 682 hp. Torque maxes out at 653 lb-ft, and 80% of that is available at 2,000 rpm, which teams with standard all-wheel drive to ensure hard launches. The V-8 would make even more power, but the exhaust routing in the Escalade is more restrictive than it is in the CT5-V’s mid-size sedan body.

GM calls the engine an LT4, but it has the supercharger from the 755-hp LT5 last used on the Chevrolet Corvette ZR1, Motor Authority’s Best Car to Buy 2019. The supercharger and power upgrade make this engine a tweener, so maybe it’s better referred to as an LT4.5. No matter the name, every Escalade-V engine is hand built and features a plaque with a name of the builder.

The Escalade-V’s V-8 sounds its barbaric yawp on every startup, and the driver can set it to be tame or to wake the neighborhood. A flap in the exhaust enables three sound settings: Stealth, Tour, and Sport. The exhaust defaults to Tour mode, but drivers can use the programmable MyMode, enabled via a button to the left of the steering wheel, to dial it down to Stealth or crank it up to Sport. Shutting off the Escalade-V when using MyMode makes your chosen exhaust setting the default the next time you start the vehicle.

Teaching your V-8 to bark may be fun, but the real fun comes when pinning the throttle. The Escalade-V’s engine note rise several decibels, the rear end squats slightly as the front end lifts, and the standard 275/50R22 all-season tires dig into the pavement to rocket this big, heavy SUV from 0-60 mph in just 4.4 seconds. It’s a thrilling, throw-you-back-into-your-seat sensation that seems nearly impossible in such a big vehicle. Launch it on a dragstrip, and the beast will cover the quarter mile in 12.74 seconds at 110 mph. There’s not much left after that, though, as the top speed is limited to 124 mph.

Along the way up the mph ladder, the V’s 10-speed automatic transmission cracks off surprisingly quick shifts in Sport mode, and the blat between gears is the best sound this rumbling, grumbling, snarling SUV makes. It’s the same transmission used in other Escalades, but its internals have been beefed up to handle so much power and torque. It works wonderfully in the Escalade-V.

Speaking of beef, the Escalade-V weighs in at a cruiserweight 6,217 lb and the long-wheelbase ESV version adds a few slabs of meat to tip the scales at 6,407 lb.

Cadillac did some work on the suspension to help tame all that high-set weight. While much of it was to handle the squat and dive that can result from shifting so much weight forward and back, the changes also improved handling. GM engineers stiffened the rear air springs and retuned the standard Magnetic Ride Control dampers for greater body control in all directions.

While the suspension changes are mere sandbags in the dam that is the Escalade-V’s monstrous weight, they also make it the best handling Escalade. Get on the brakes heading into a corner and the three tons of V-8 fun wants to continue forward. Brake hard enough to get the weight and speed under control, steer it into the corner, and it wants to lean. However, it doesn’t flop from side to side as expected, and it doesn’t wobble to disrupt passengers with undue head toss. From behind the wheel, it feels like you’re coaxing a plow horse through an obstacle course rather than an Andalusian, but at least it’s not an ox. No matter the suspension setting, the magnetic dampers combine with substantial sidewalls on the 50-series tires to create a comfortable ride.

The standard all-wheel-drive system can also aid handling. It comes with a standard electronic limited-slip differential that helps sort out the power for best traction. The system can also be set to a Sport mode that sets the front/rear torque split at 30/70 to provide the sportier feel of rear-drive handling.

In any kind of driving, the V’s steering is the best in class. It combines a surprising amount of feel with direct responses and a reassuring weight build-up off center, especially at speed. Cadillac tweaked the Escalade’s already exceptional steering for additional weight build-up as the wheel turns. They also swapped out the front brake calipers for 6-piston Brembo units. Cadillac offers Tour and Sport settings for the brake feel. Both get the job done, but I prefer the quicker brake-pressure increase of Sport mode.

Drivers can tap into all of the Escalade-V’s performance potential by hitting the V mode button in front of the gearshift. V mode sets six vehicle systems to their sportiest settings. They include the engine and transmission, steering effort, AWD system, brake feel, suspension, and exhaust sound. V mode also unlocks launch control to enable those 4.4-second 0-60 mph runs. The Escalade-V gets loud and feels high-strung in V mode, so I recommend picking your favorite MyMode settings and using them anytime you don’t really want to unleash the beast.

The Escalade-V joins the lineup as the brand’s most expensive model. It carries a $149,990 base price (including $1,795 for destination) in the short-wheelbase body style, and the long-wheelbase ESV model runs the score up to $152,900. That’s extreme pricing for an SUV.

In addition to the V engineering and equipment (electronic limited-slip differential, Brembo front brakes, interior trim, V mode, etc.), it’s equipped like the former top-of-the-line Sport Platinum model, which starts at $106,465. The move to the V is a whopping $43,525 premium. Oddly, neither includes GM’s Super Cruise hands-free driver-assistance system, which means buyers have to spend another $2,500 to get it (even at $150K, really?).

On the outside, the V can be spotted by its front fascia with a larger lower intake, red brake calipers, unique 22-inch wheels, a rear fascia that makes room for quad exhaust tips, and V badges on the front doors and tailgate.

The EPA has yet to determine fuel economy ratings for the Escalade-V, but they are certain to make buyers cringe. They’ll very likely be lower than the 14 mpg city, 19 highway, 16 combined of the Escalade’s naturally aspirated 6.2-lier V-8 with all-wheel drive. During my drive of an ESV model, I averaged 14.2 mpg over mostly highway driving, according to the trip odometer. If the ratings come in optimistically at 14 mpg combined, it will cost almost $160 to fill the ESV model’s 28.3-gallon fuel tank at $5.64 per gallon for premium. Ouch.

The 2023 Cadillac Escalade-V does things no three-ton SUV should do. It has supercar power, it’s as fast as a Nissan Z in a straight line, and it carries its weight better than other full-size body-on-frame SUVs, all while offering state-of-the-art technology and exemplary luxury. However, Cadillac makes you pay dearly for its capabilities. Its pricing approaches supercar territory and its thirst could embarrass a rail-riding wino. It’s a tale of extremes for buyers who want it all, with an extreme price to pay for its extreme performance.

Cadillac paid for airfare and lodging for Motor Authority to drive the Escalade-V in 107-degree Arizona heat to bring you this firsthand report.