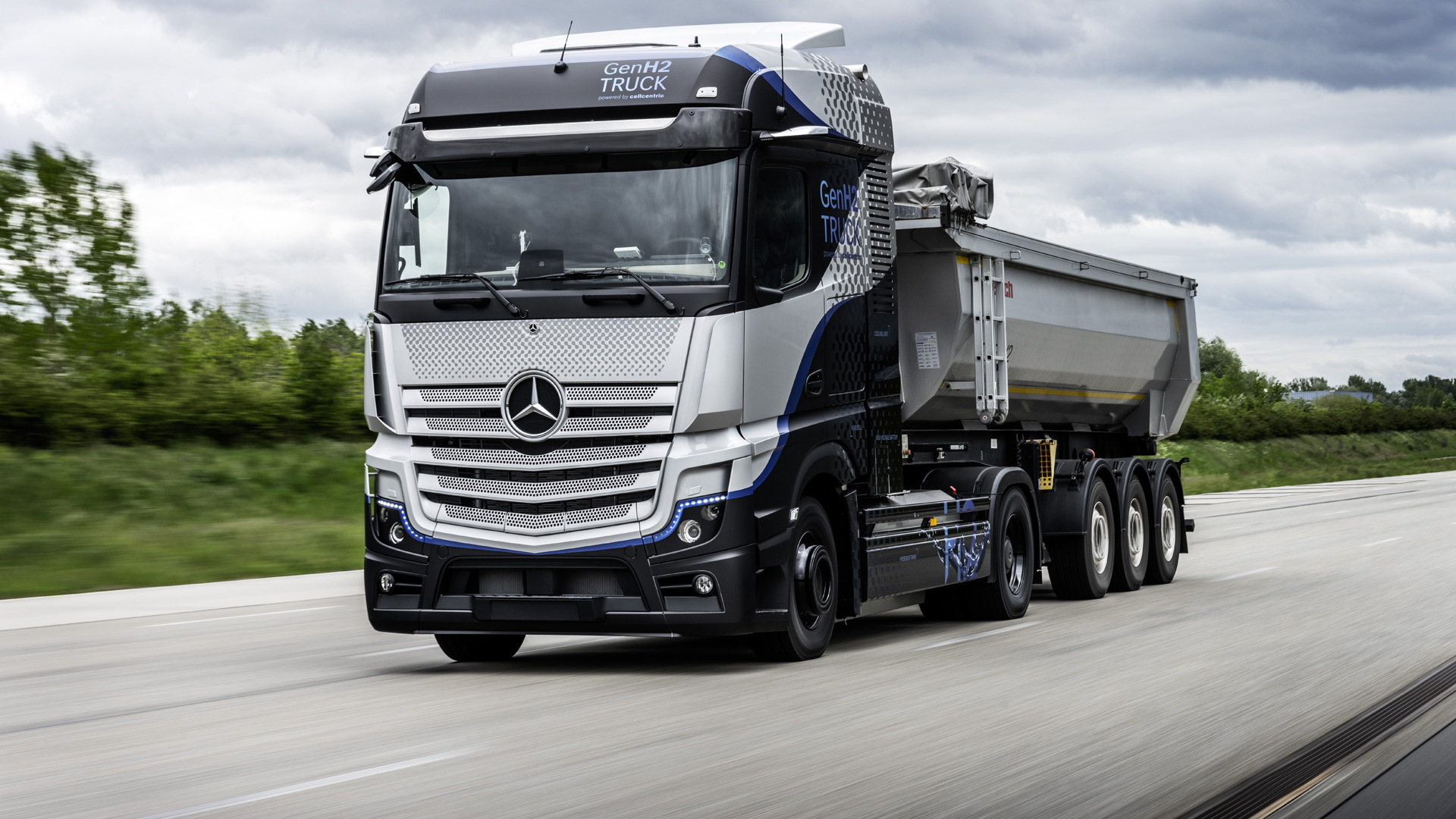 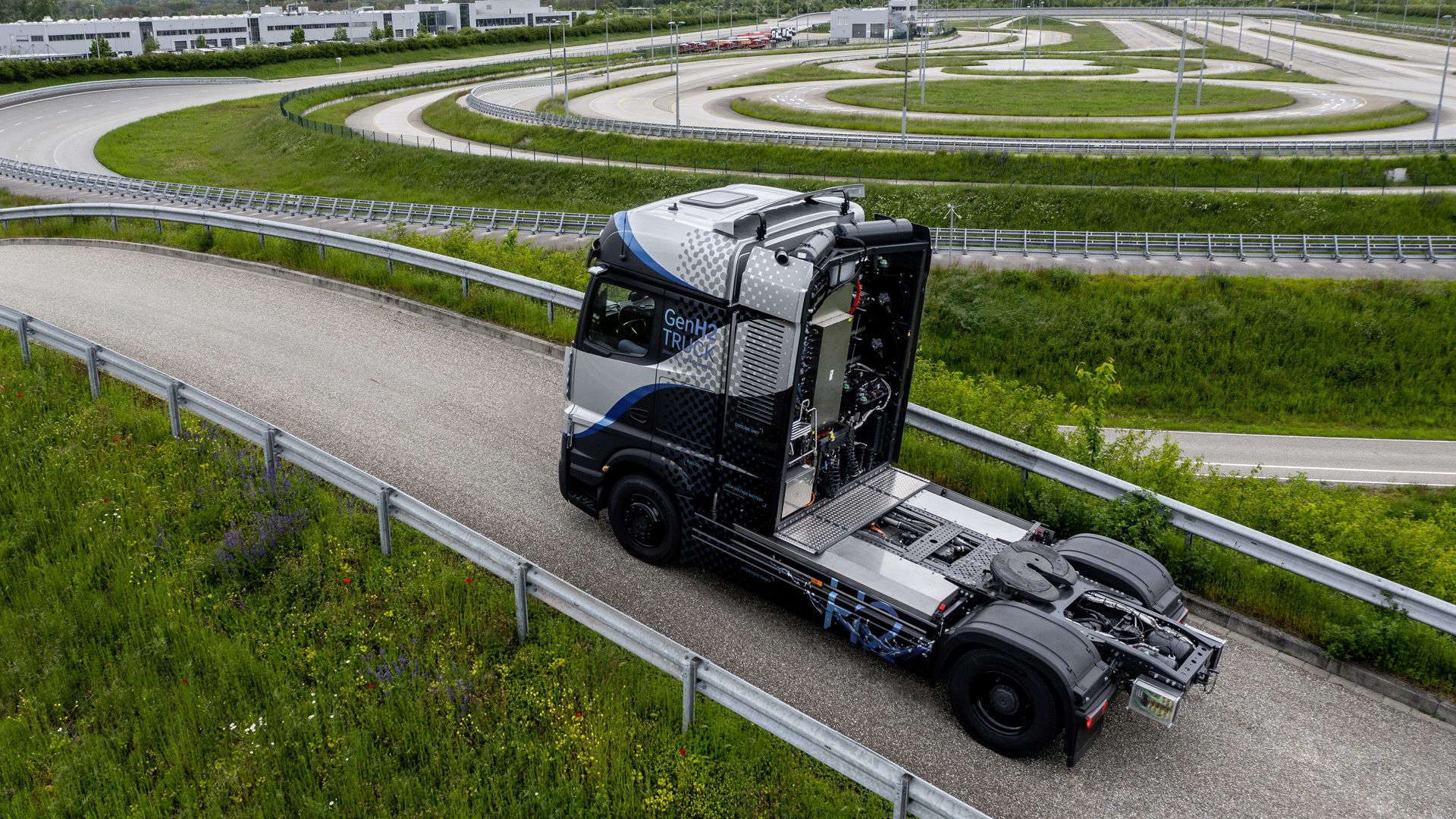 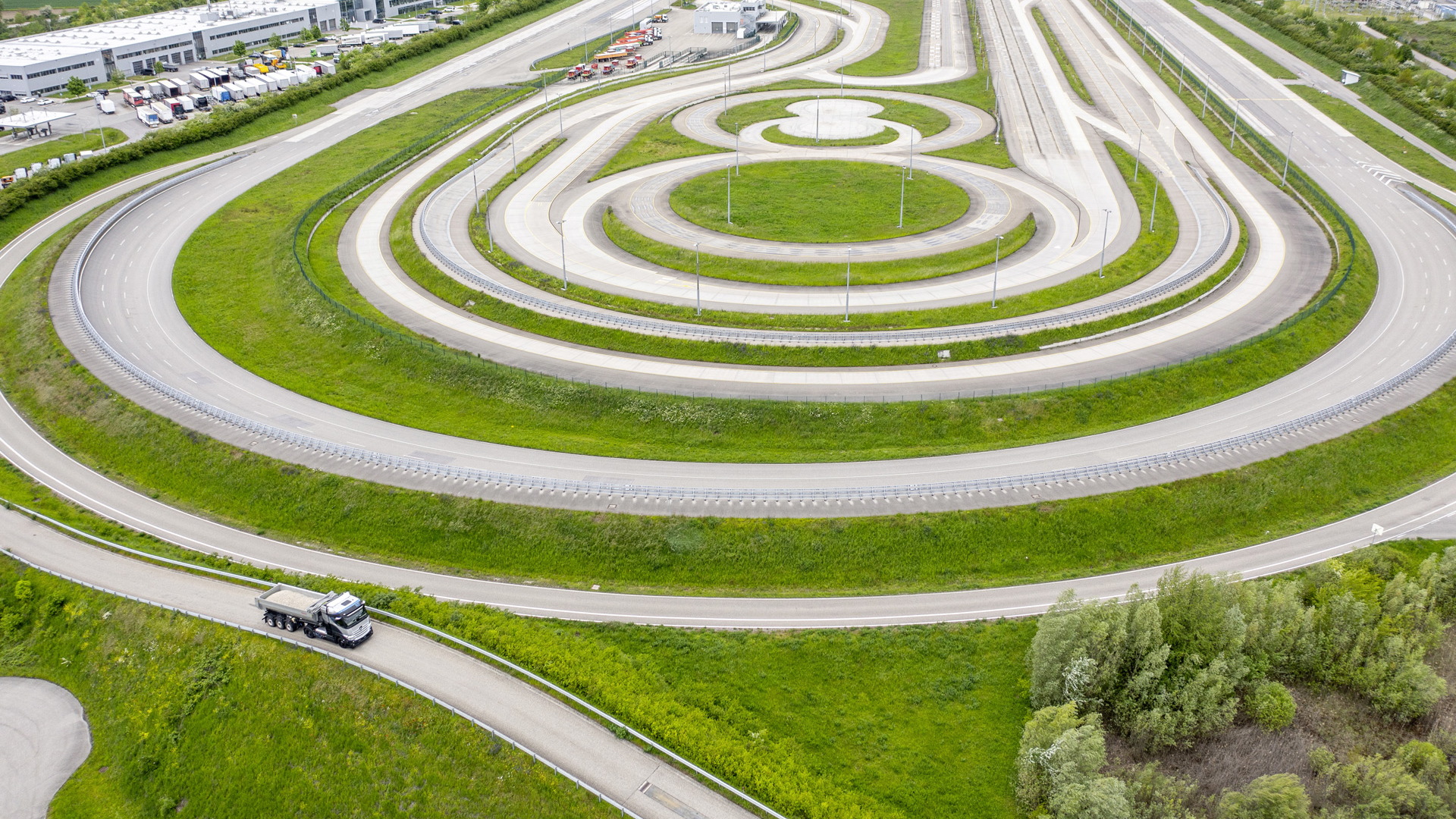 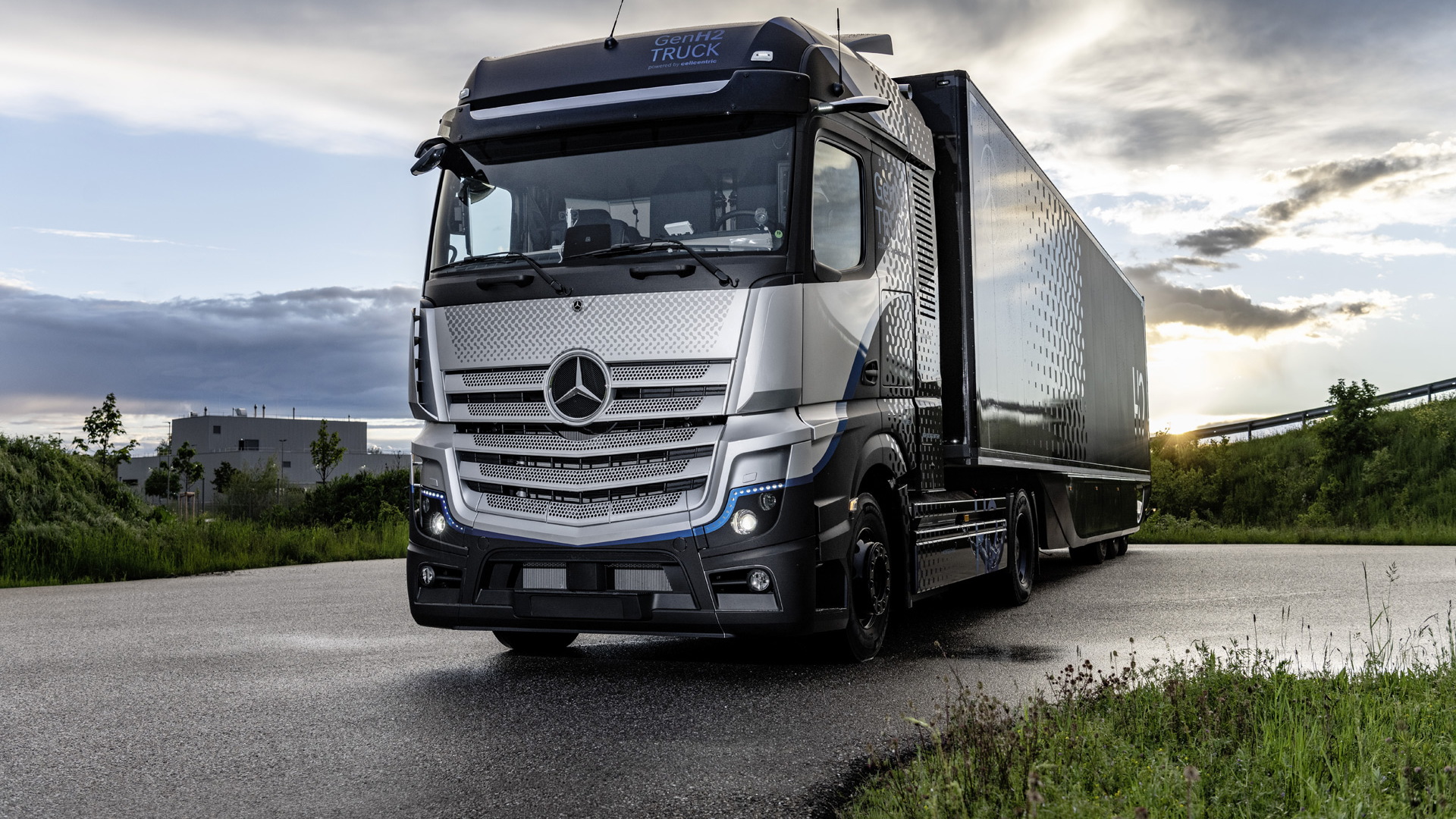 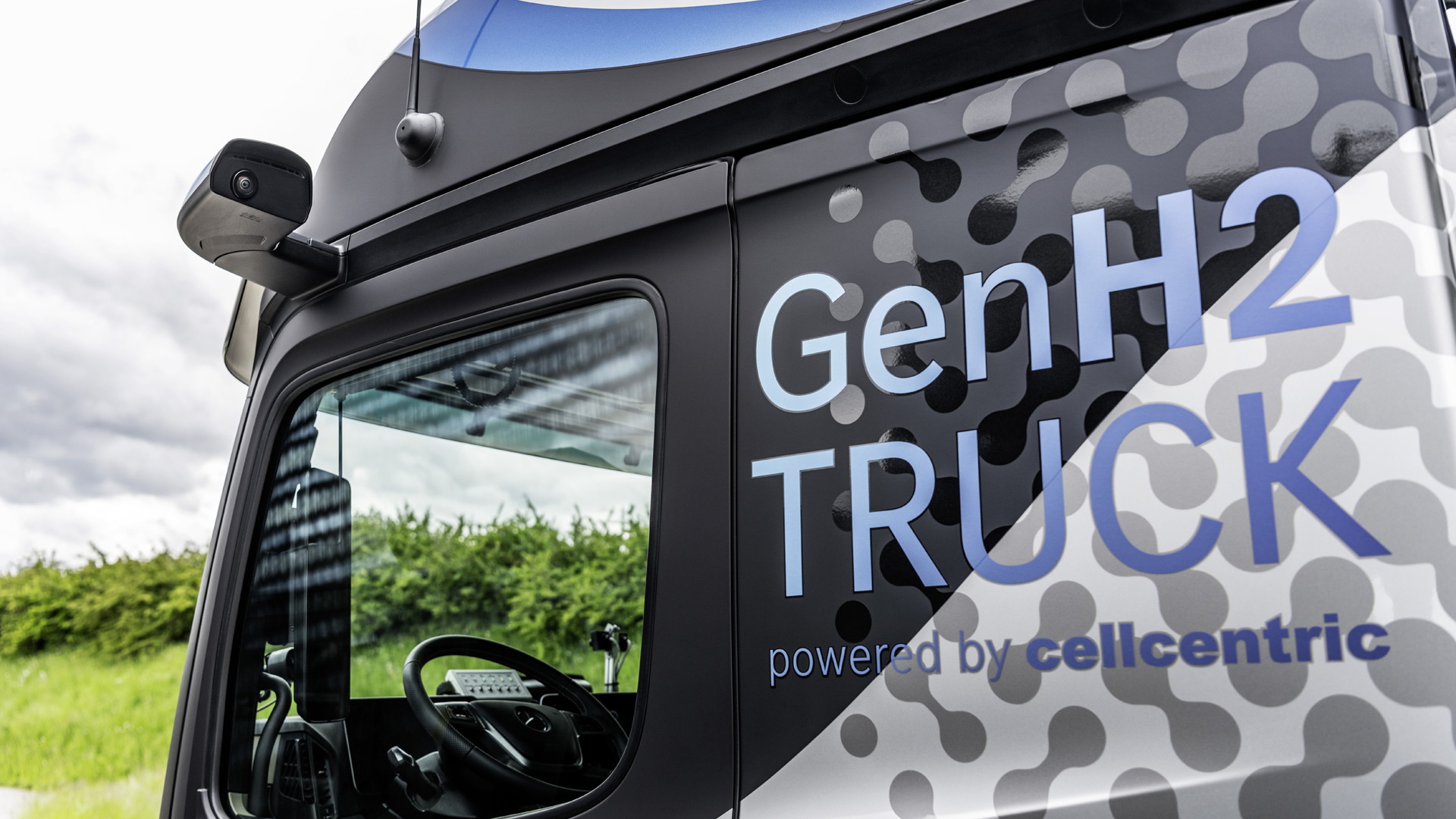 Daimler Truck, the commercial vehicle sister company to Mercedes-Benz, has started testing prototypes for a semi-trailer truck powered by a hydrogen-electric powertrain.

The prototype is based on a Mercedes-Benz Actros, but its powertrain could potentially end up in trucks and buses from other Daimler Truck brands such as Freightliner, Western Star and Fuso.

The powertrain could also end up in trucks from Volvo Group as the Swedish company, which is separate to the Volvo car company, earlier this year formed the joint venture Cellcentric with Daimler Trucks to develop and produce at scale hydrogen-electric powertrains for commercial vehicles.

First previewed last year in the Mercedes-Benz GenH2 Truck concept, the powertrain consists of a dual-motor system where each motor can deliver a continuous 308 hp and 1,163 lb-ft of torque and peak 442 hp and 1,527 lb-ft. Normally the motors draw energy from a hydrogen fuel-cell stack but during high-load situations, energy is also drawn from a battery that's kept charged. This battery will have a relatively small capacity since it will only be used temporarily, like when the truck is accelerating hard or climbing a steep hill.

The prototype is fitted with liquid hydrogen storage tanks, chosen because they can be smaller and, due to the lower pressure, significantly lighter than tanks required for gaseous hydrogen.

The testing is rigorous, as the trucks will have to meet the same reliability and longevity requirements of current diesel trucks. This includes a lifespan of at least 750,000 miles over 10 years and a total of 25,000 hours of operation.

There's a lot of work to be done. Daimler Trucks plans to start customer trials in 2023 but volume deliveries aren't expected until 2027. Why the delay? In addition to developing and testing the technology, there also needs to be a rollout of hydrogen fueling stations before customers will be willing to make the purchase.

Daimler Trucks is also developing battery-electric trucks for shorter routes and already has some on sale, like the Fuso eCanter which started production in 2017. It will launch a bigger Mercedes eActros battery-electric truck capable of over 124 miles of range later this year, and one capable of over 310 miles in 2024. But for ultimate range, for example more than 600 miles, Daimler Trucks is looking at hydrogen-electric powertrains as the solution.

In addition to Daimler Trucks and Volvo, General Motors, Kenworth, Navistar and Toyota are also testing hydrogen-electric semis. Companies like Hyundai and Nikola are also exploring the possibility.