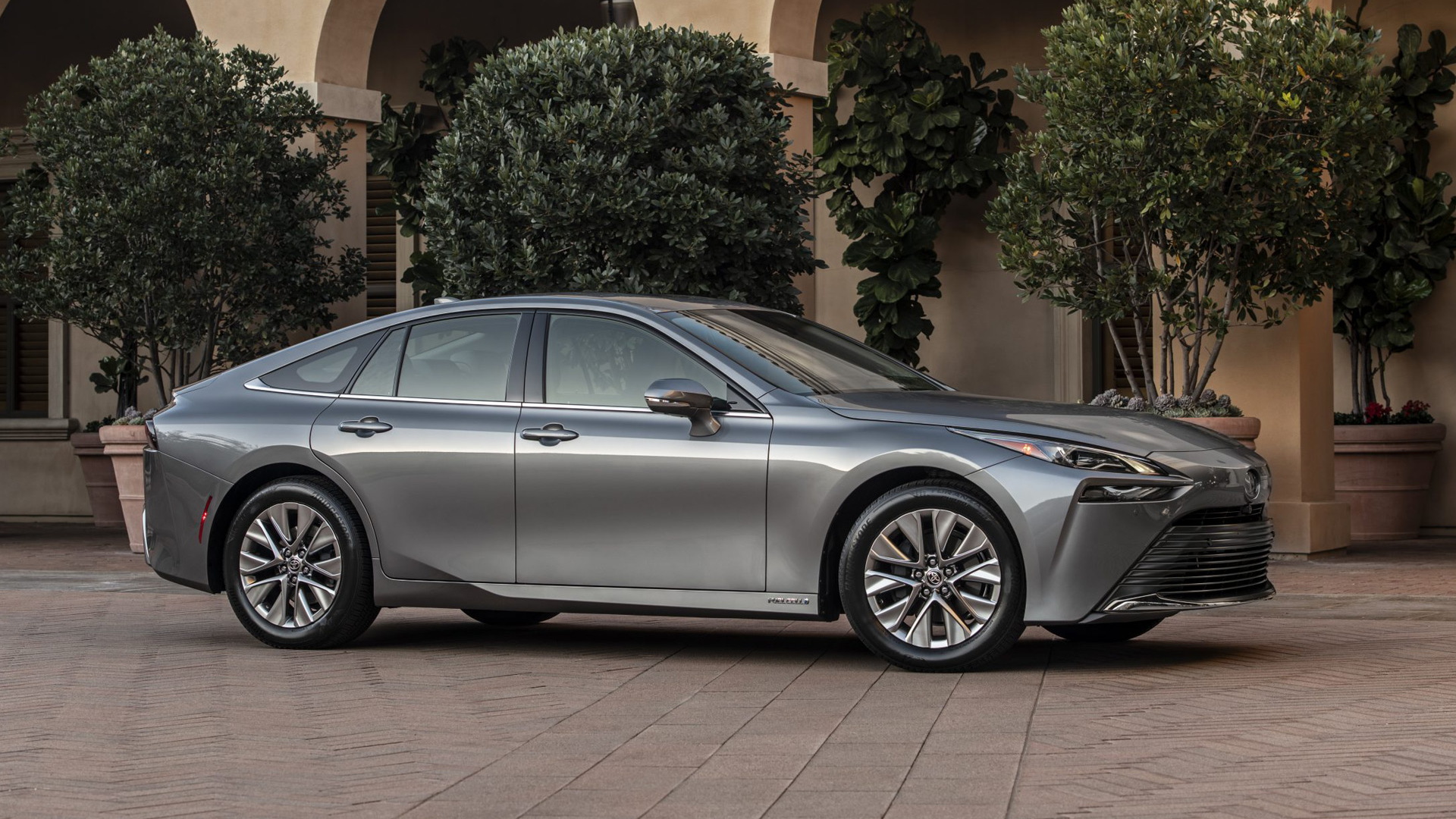 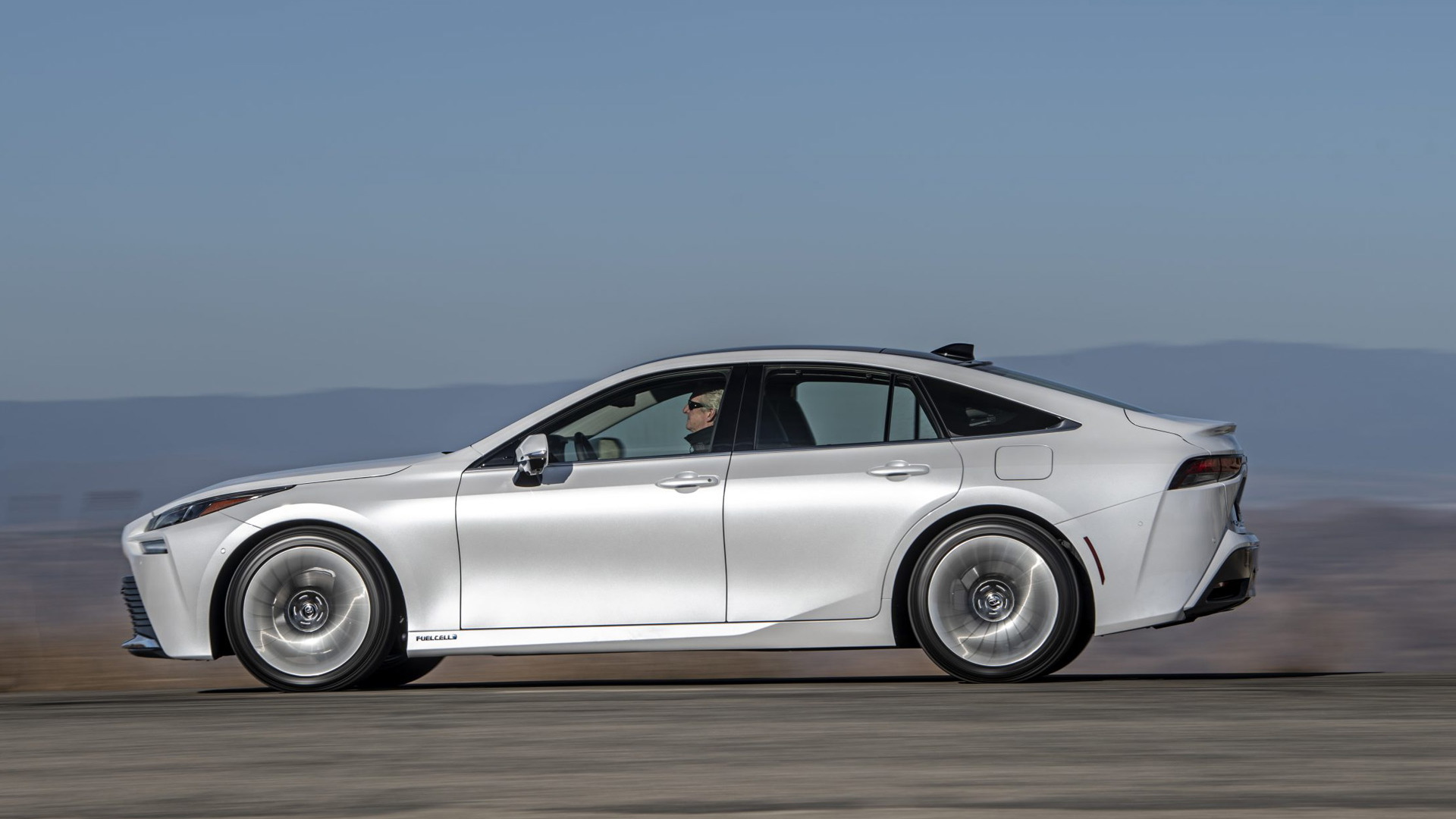 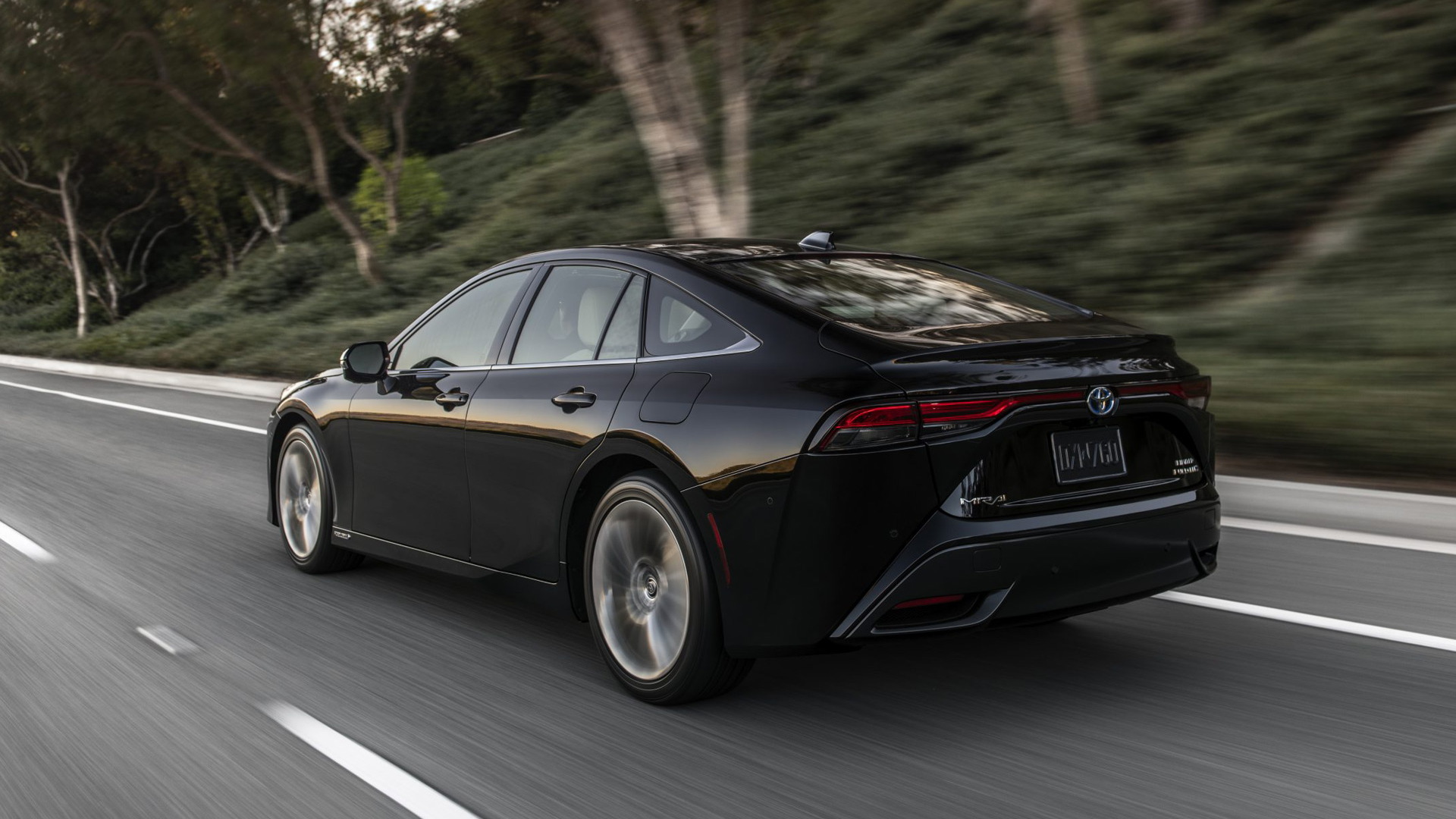 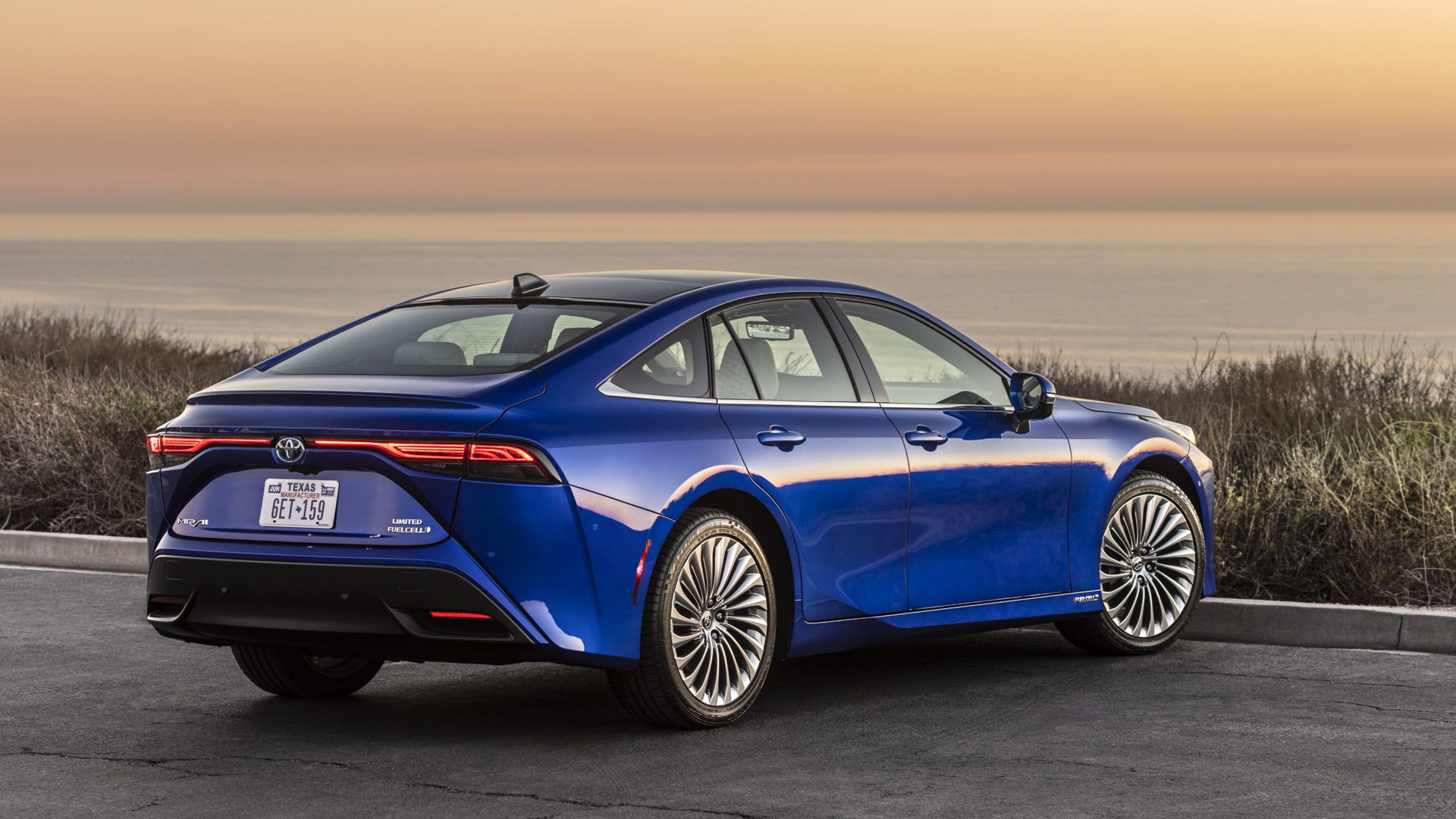 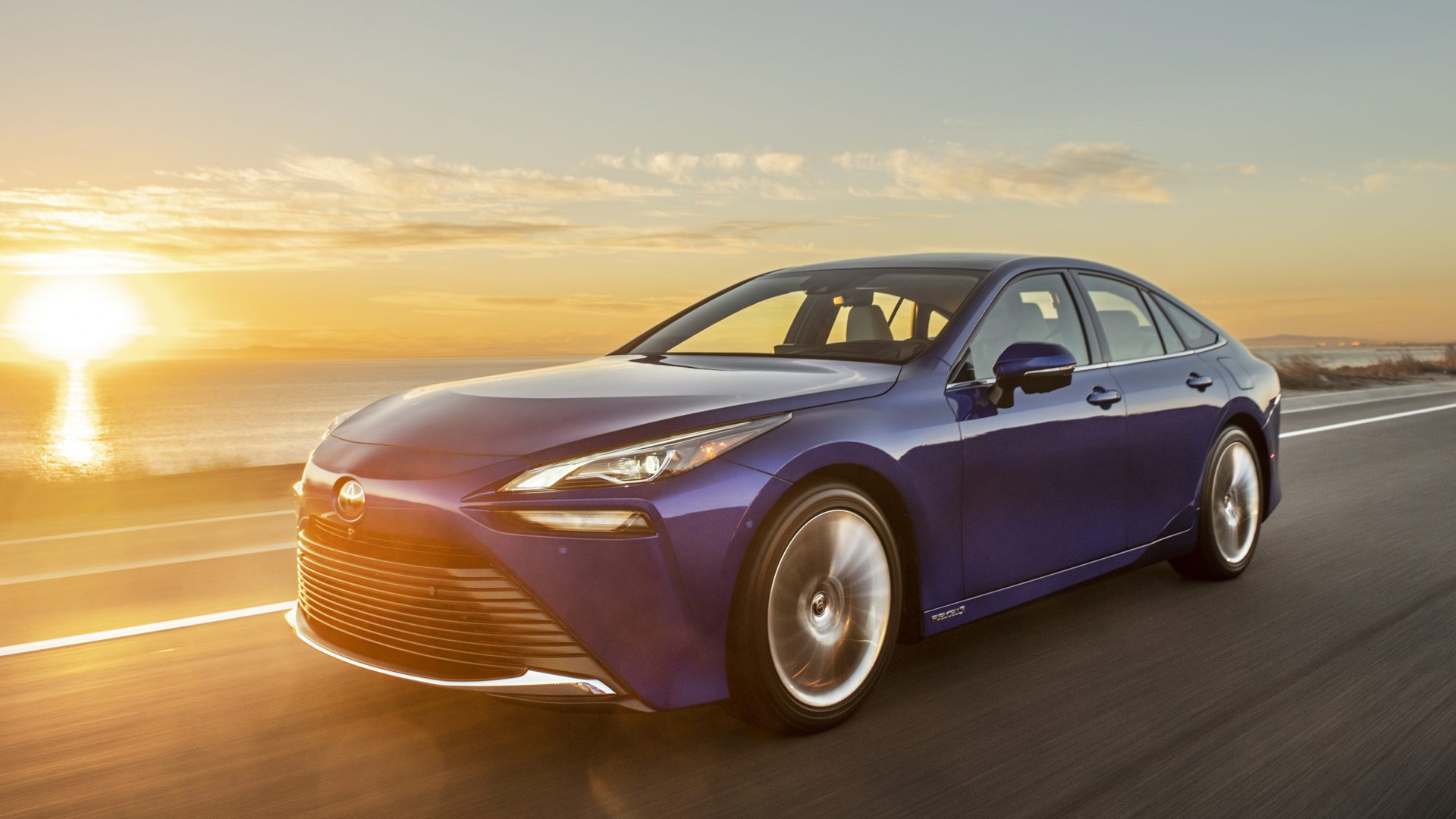 The Toyota Mirai fuel cell-electric sedan has been redesigned for the 2021 model year, with the new generation starting sales this month.

The 2021 Mirai is priced to start at $50,455, including destination, which is about $9,000 less than the starting price of the previous-generation model. The monthly lease rate starts at $499, which is unchanged from the previous model.

Toyota is also throwing in $15,000 worth of complimentary hydrogen, which the automaker also did with the previous Mirai. Of course, finding a fueling station that serves hydrogen is only possible if you happen to be in one of two states: California has 43 stations and Hawaii has one. Toyota has said it will install its own hydrogen fueling stations in the Northeast and other parts of the country to help expand markets for the Mirai, though timing is unclear.

If you're happy with the fueling limitation, there's a lot to like about the 2021 Mirai. The new look was previewed at the 2019 Los Angeles Auto Show and is much sexier and sleeker than before. Things are also bigger. The length has been increased to 195.8 inches, versus the previous Mirai's 192.5 inches, and the wheelbase has been increased by even more.

The new Mirai's platform, borrowed from Lexus, is also more rigid than the one it replaces, and drive has switched from the front wheels to the rear, a change that should result in sportier handling. Also sure to add to the sportier feel is extra power. The 2021 Mirai is confirmed with a single electric motor at the rear axle good for 181 horsepower and 221 pound-feet of torque.

The motor draws its energy either from a fuel cell stack mounted under the hood, or a small lithium-ion battery. Thanks to the battery, the Mirai can recover energy under braking and store this for later use. Toyota estimates a range of about 402 miles on a fill of hydrogen, which is 30% higher than the previous model.

Fuel cell stacks work by combining hydrogen with oxygen from the air in a process that creates electricity. The only byproduct is water, which is released back into the environment as water vapor. The hydrogen is stored in three 10,000-psi carbon-fiber-reinforced high-pressure tanks: one mounted longitudinally in the center of the car; another mounted transversely under the rear seat, and a third in the trunk under the battery. The three tanks together hold about 11 pounds of hydrogen and take about five minutes to fill.

Inside the cabin of the 2021 Mirai, the design cribs heavily from the Lexus playbook. The dash is largely clear of buttons as many of the usual controls have been moved to a standard 12.3-inch touchscreen display. This is joined by an 8.0-inch screen serving as the instrument cluster. A digital rearview mirror is also offered on the new Mirai. Other premium features, either standard or available, include heated seats, a color head-up display, three-zone climate control, a rear touchscreen for climate and audio control, a surround-view camera, and a 14-speaker JBL audio system. There's also electronic driver-assist features include park assist, collision warning with pedestrian detection and automatic emergency braking, and adaptive cruise control.

While most automakers are focused exclusively on battery-electric cars for zero-emission driving, Toyota still sees a place for hydrogen in long-distance driving, particularly in the trucking segment. Toyota recently teamed up with truck manufacturer Kenworth to build a handful of fuel cell-electric semi-trailer trucks for use in a trial in the Los Angeles region.

For more on the Toyota Mirai, read the in-depth reviews at The Car Connection.