Given the popularity of 6x6 off-roader conversions, we're surprised it took this long, but it's finally happened. A Florida company has created a Jeep Gladiator 6x6 conversion.

The So Flo (short for South Florida) Jeeps SF 6x6G ditches every piece of factory sheet metal except the doors, according to the company. The bed is stretched to accommodate the additional axle and the front end gets an angry-looking grille with red LED headlights. The entire truck is coated in a scratch-resistant material made with Kevlar. The coating is 1/16-inch thick, which requires 20 gallons of the material, according to So Flo Jeeps.

The 6x6 drivetrain consists of 5.13 axles, and a middle axle equipped with a Detroit True Track Locker and a 9.0-inch differential. The truck also features a 5.0-inch lift kit that allows for 14 inches of wheel travel on each axle. A Falcon steering stabilizer was added to help improve steering feel with the suspension mods. The Gladiator rides on 38-inch Patagonia tires. 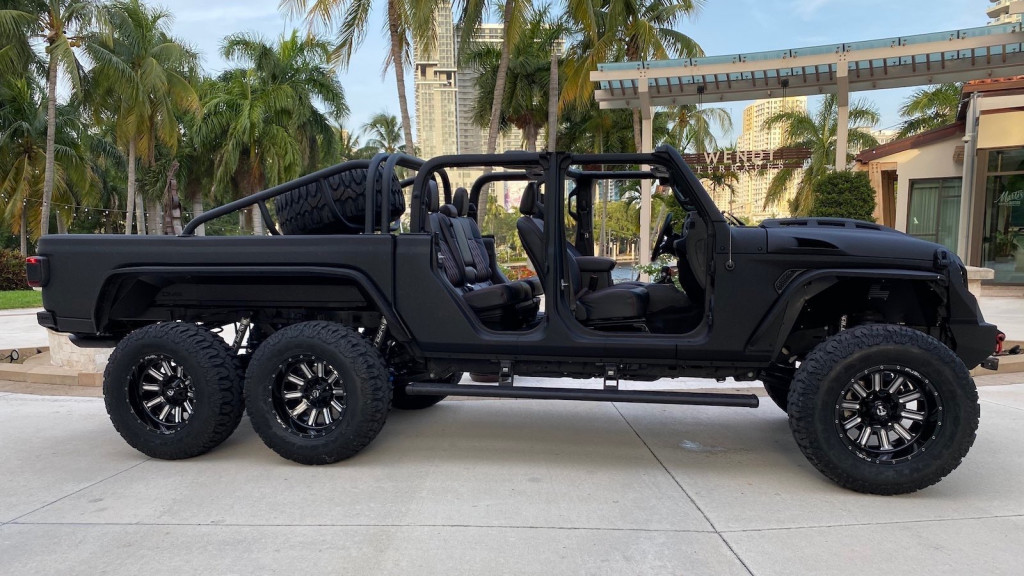 So Flo Jeeps also offers a Wrangler 6x6 conversion with the turbodiesel V-6 introduced for the 2020 model year, but that's not the only one on the market. At the 2018 SEMA show, a California company called Exotic Custom Motorsports unveiled a Wrangler 6x6 powered by a supercharged 6.2-liter Hellcat V-8.

Rezvani is also planning a 6x6 truck called the Hercules. The company hasn't revealed many details, but, given that it used the Wrangler as the basis for its Tank SUV, don't be surprised if Rezvani uses the Gladiator for its Hercules 6x6 build.