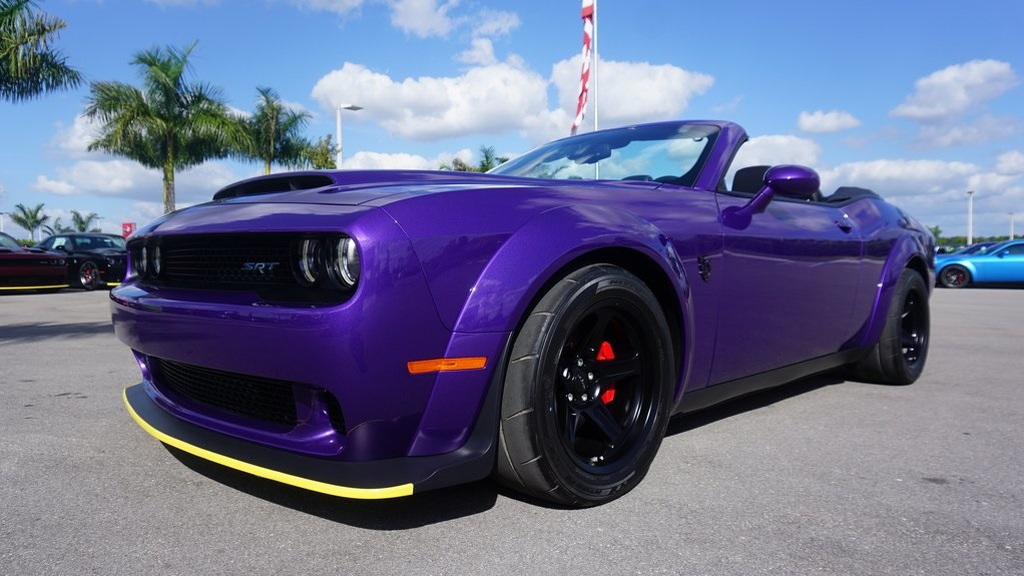 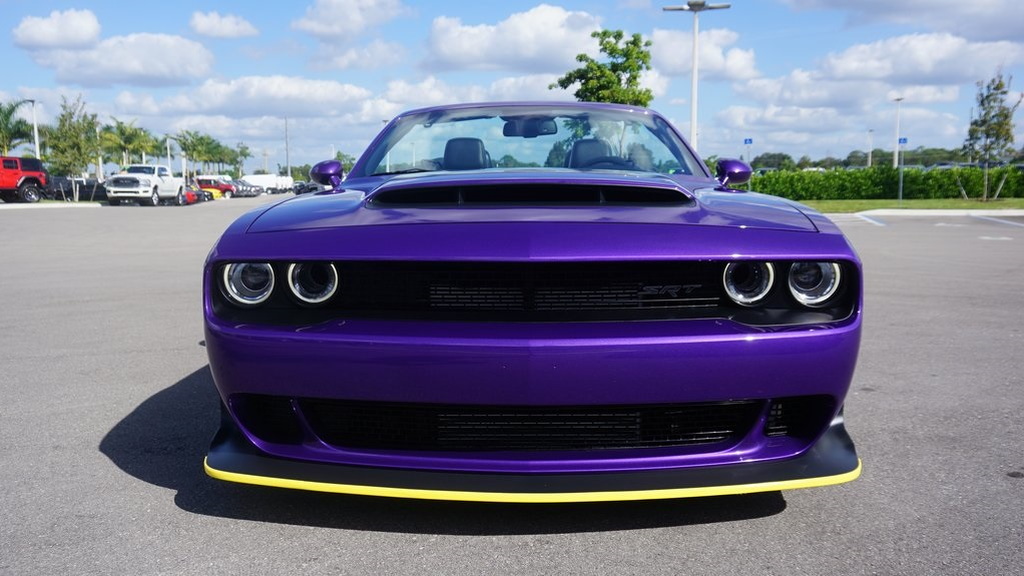 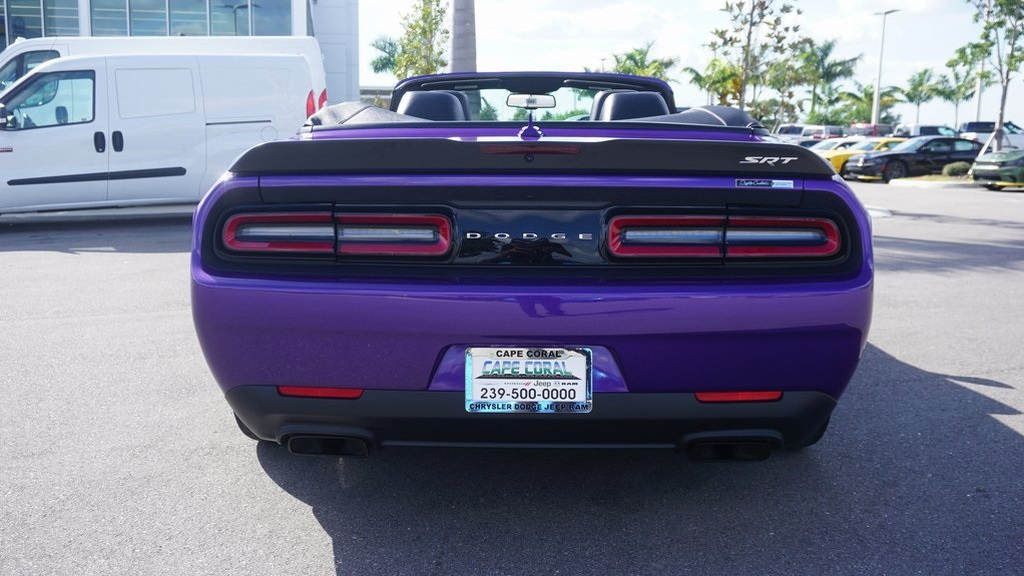 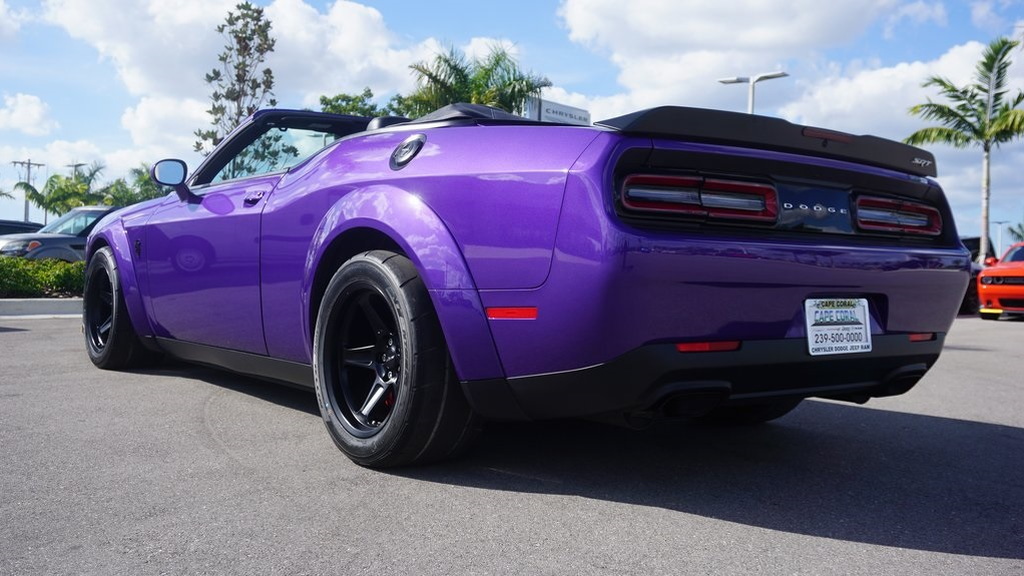 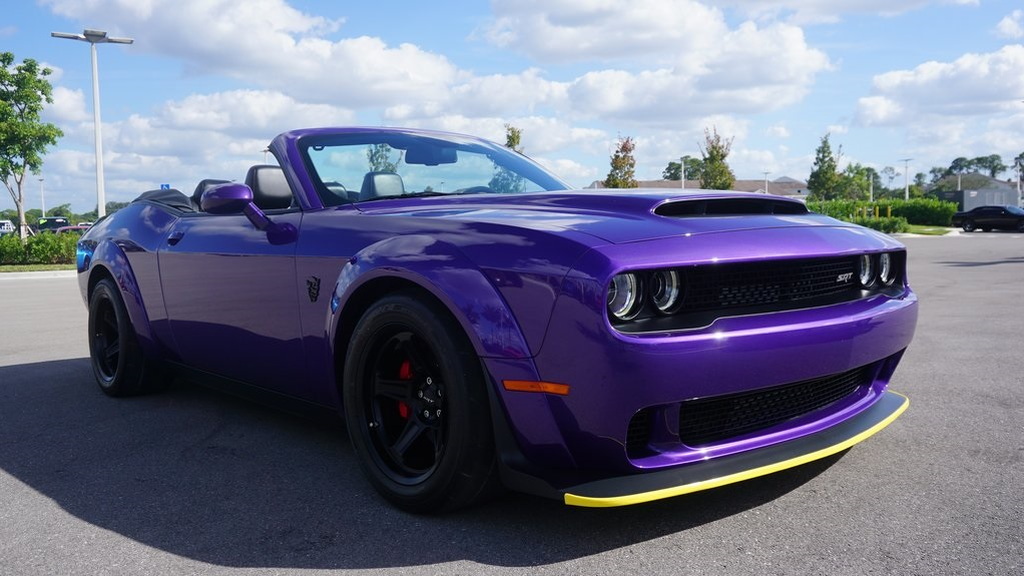 It might not be wise to convert an 840-horsepower coupe into a convertible, but one crazy enthusiast did just that by commissioning a droptop version of a 2018 Dodge Challenger SRT Demon.

While the car is listed for sale by the Cape Coral Chrysler, Dodge, Jeep, and Ram dealership, a salesman named Jason Jans told Motor Authority the car is actually on consignment.

The CarFax report reveals this purple Demon is currently on its second owner; the first was a Michigan dealership, according to Jans. The second owner registered the car in Indiana with just 14 miles on it, but Jans said the owner now lives in Florida.

The convertible conversion was done by Droptop Customs of High Springs, Florida. The company has been in business since 1976, and its claim to fame is a pair of Challenger convertibles commissioned by Shaquille O'Neal.

Droptop Customs' sales manager Larry Moran told Motor Authority the company didn't simply chop the top off the Demon to make it a convertible. Doing a conversion is about knowing where and how to add reinforcements. For this Demon project, that required adding a lot of metal to recover some of the structural rigidity lost with the roof and offset the effects of all that horsepower and torque.

The frame rails inboard of the rockers were reinforced on both sides with 1x2-inch pieces of metal, and diagonally mounted metal braces were added underneath to control twist. Structural supports were added to the front edge of the trunk, both the front and rear shock towers were reinforced, and the shop boxed the connection of the front rails to the engine cradle. To prevent the long, heavy doors from moving, the shop added gussets to the bottom rear corner of each door.

When Droptop Customs cut off the top, Moran said the shop left 4-plus-inches of metal in place behind the windshield header to provide a strong perimeter. The three-layer soft-top has a heated glass rear window. It's controlled with manual latches on both sides of the windshield and is power operated by a hydraulic motor. It takes about 20 second to raise or lower the top, and while it can be done at slow speeds it's recommended the car be stationary.

Moran wouldn't detail how much the conversion cost, but the Demon originally retailed for $84,995 plus destination and this car is listed at for $145,995 with just 172 miles on the odometer.

It may not be wise to cut the top off a Demon and spend $146K to own it, but the person who buys this conversion will have a one-of-a-kind muscle car.