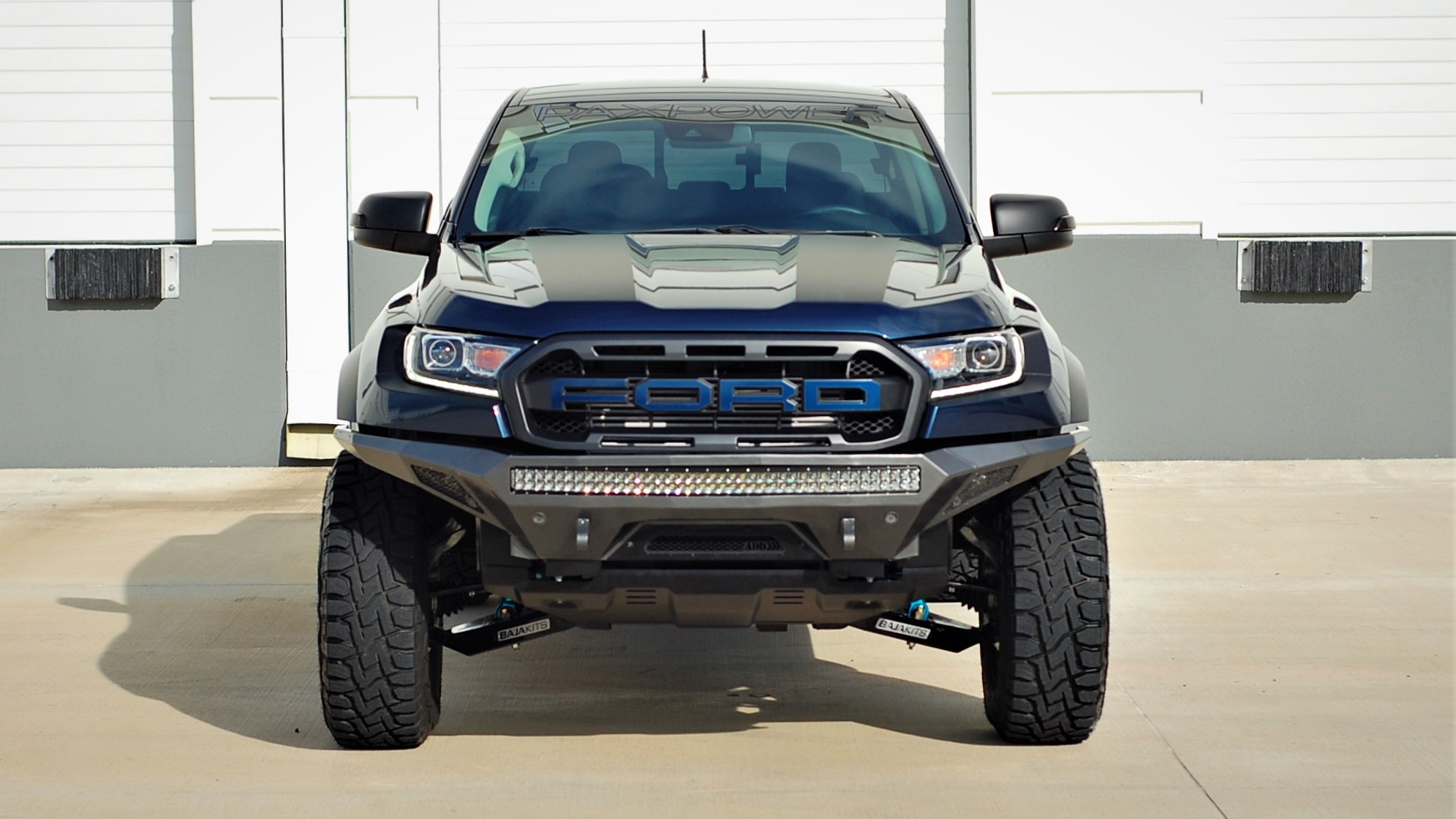 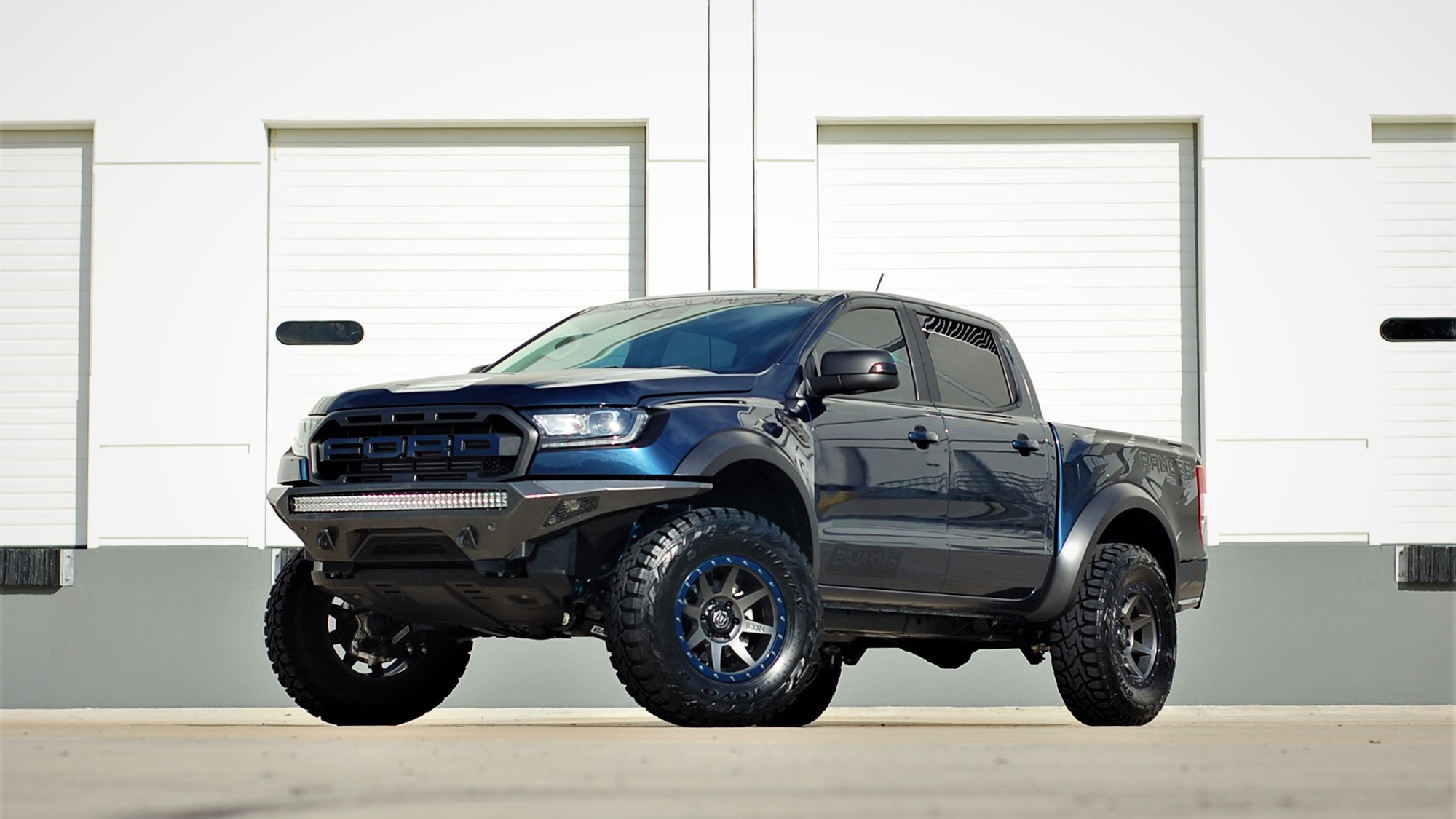 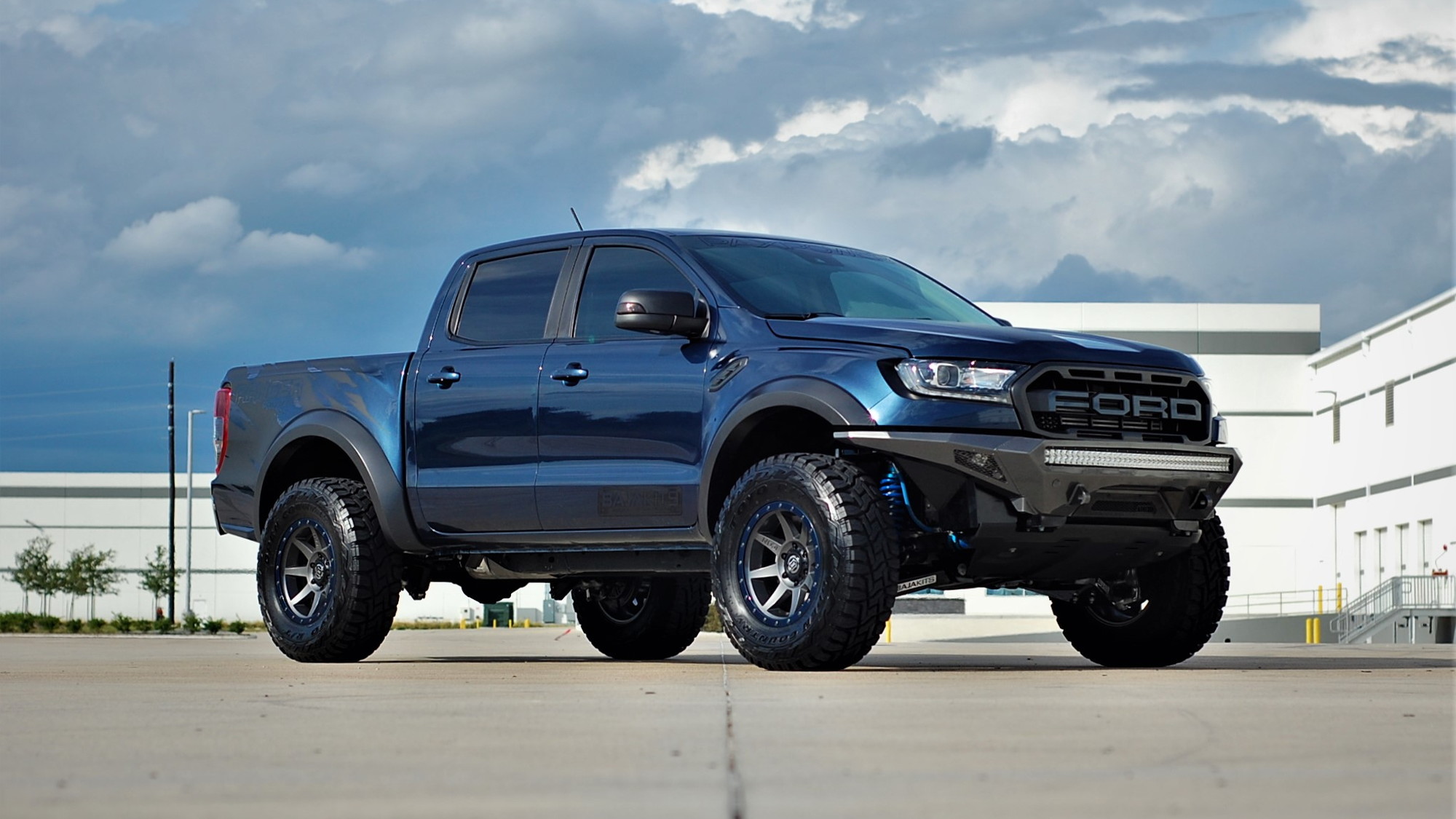 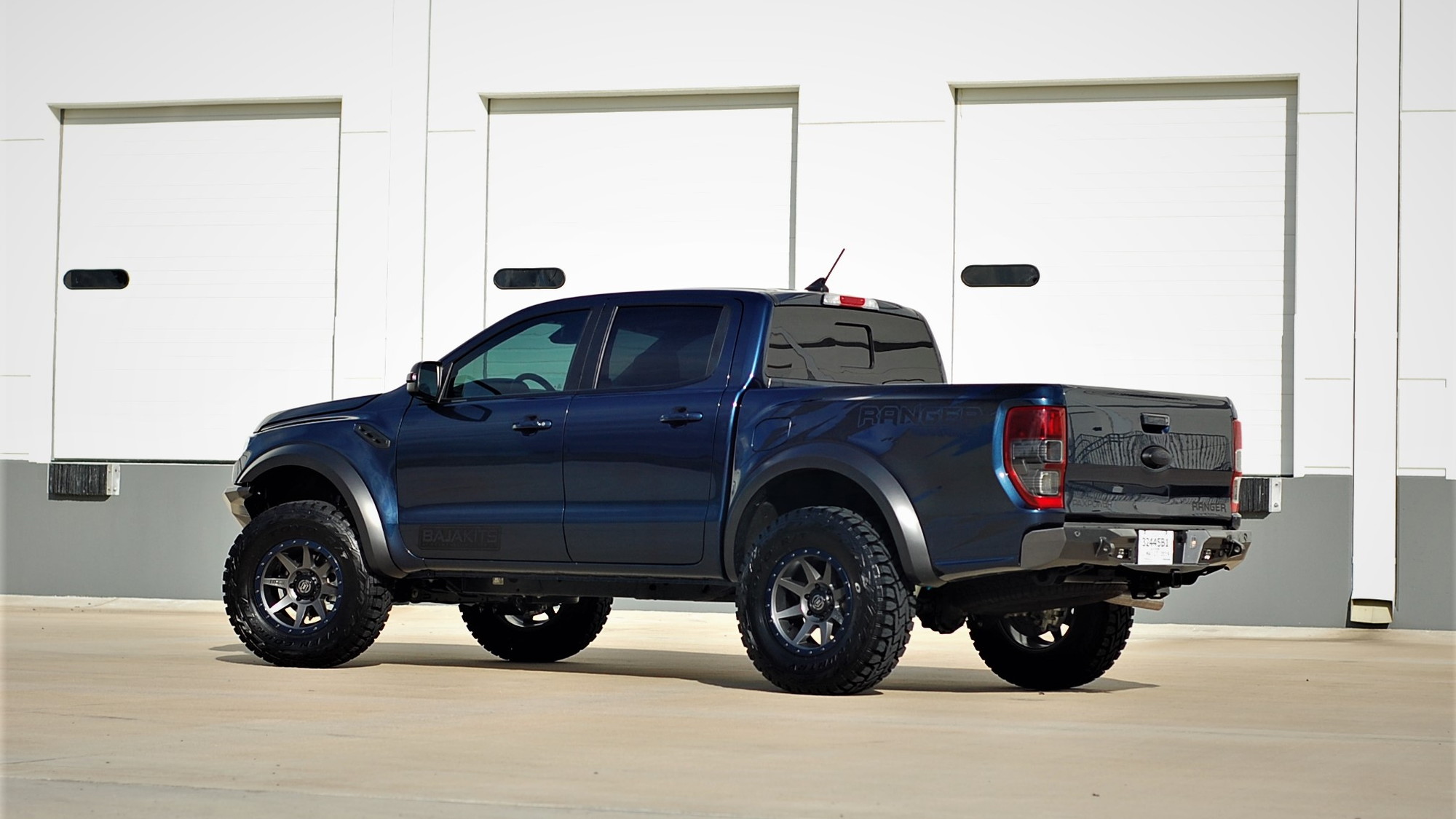 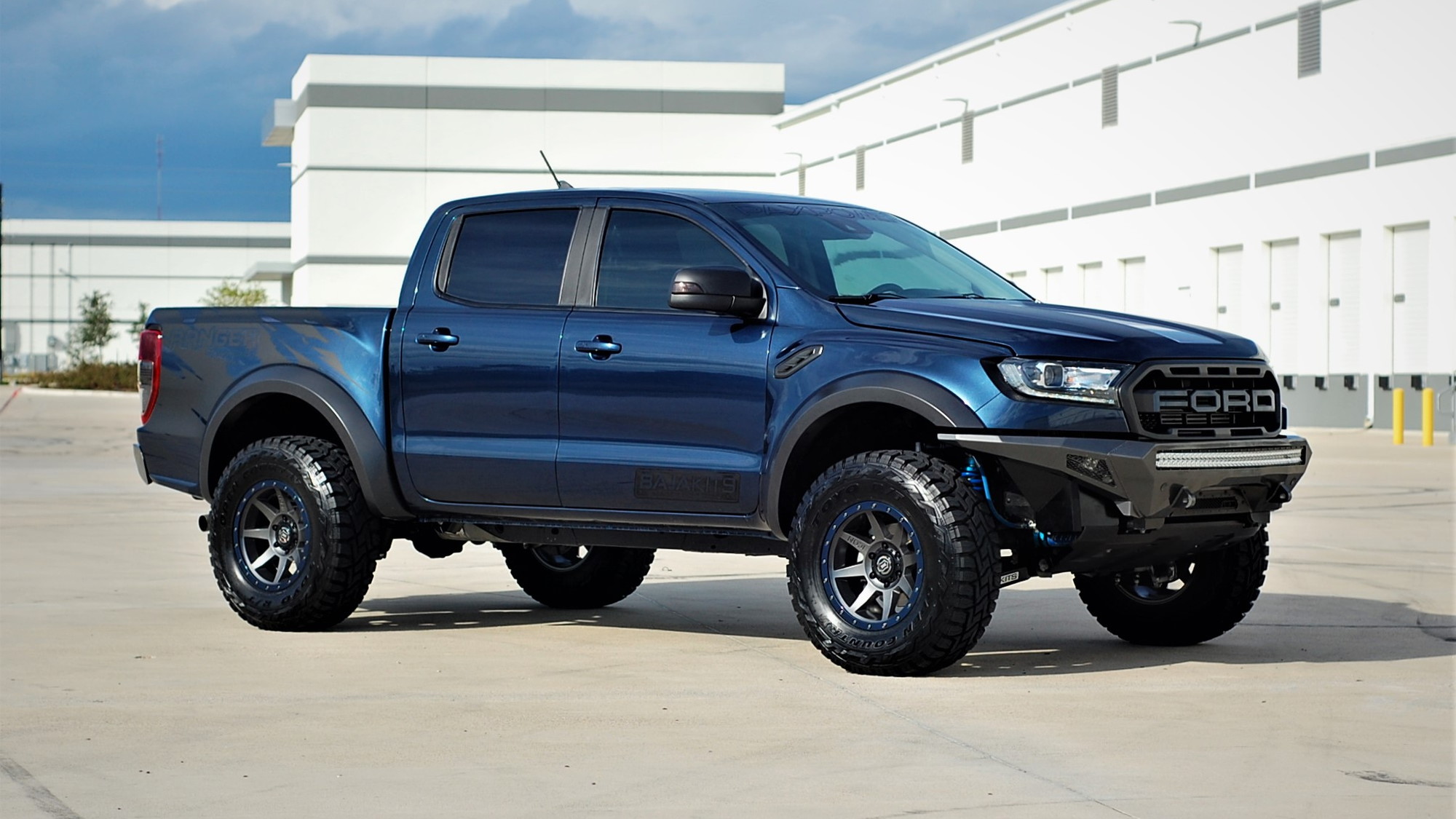 Ford may not have any interest in selling to its U.S. customers a Raptor variant of its new mid-size Ranger pickup, but that's not stopping the aftermarket from stepping in. California's PaxPower, which has long specialized in modifying Ford's fast pickup, is now offering a factory-like Raptor conversion for the stock FX4.

When we say "factory-like," we mean it. PaxPower set out to create an honest reproduction of the OEM Ranger Raptor offered overseas. PaxPower strips off the fenders and replaces them with OEM Raptor panels (which means replacing the entire bed sides). The front and rear bumpers were also replaced, as was the grille. PaxPower says the only remaining stock parts from the FX4 Lariat donor car used for its SEMA build were the LED headlights.

Under the metal, this Ranger has a BajaKits prerunner suspension with longer, beefed-up upper and lower control arms, resulting in a 5-inch increase in track width. Adjustable 2.5-inch King racing shocks are fitted at each corner, and it was finished off with 17-inch Icon wheels with Toyo R/T tires. While tuning hasn't yet been locked down, PaxPower says its baby Raptor should make about 350 horsepower thanks to a tune for the stock 2.3-liter turbo-4. Unlike the real thing, there's no diesel offered here.

While PaxPower made its name modifying Ford's Raptor, the company has recently branched out into building alternatives for the GM crowd, which has been left out in the cold by GM's performance division. PaxPower's Chevrolet Silverado Jackal package is a bit on the mild side when it comes to engine modifications, but it gives Chevy's full-size pickup the off-road capability and durability to keep up with Ford's burly F-150.

If you want your own PaxPower Raptor Ranger, be prepared to shell out approximately $65,000—the same price as a factory F-150 Raptor. PaxPower will have the its Ranger on display at the BajaKits booth at SEMA this week so the public can check it out in person.