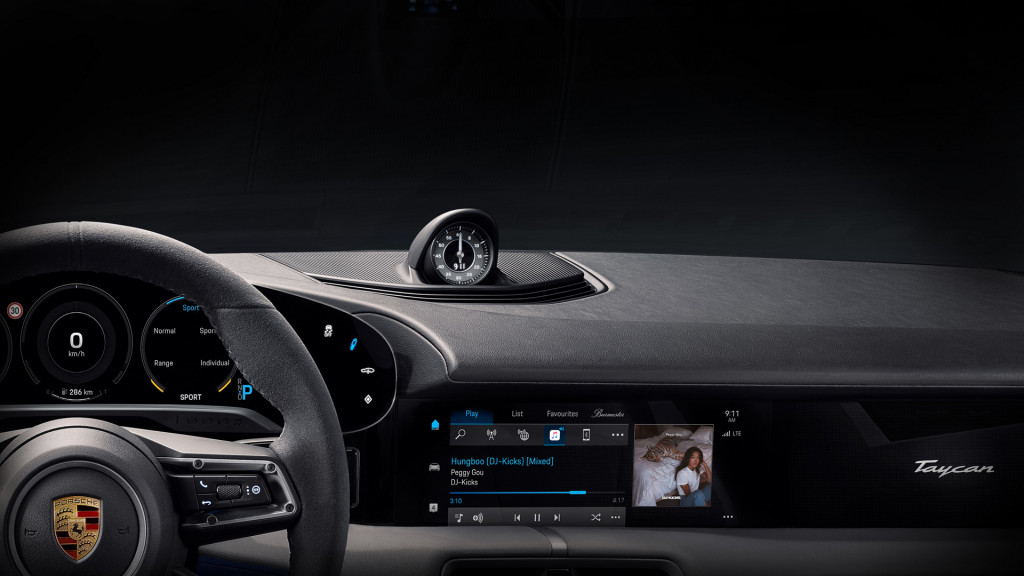 Over the last several months, the Porsche Taycan has been slowly dropping its exterior camouflage, giving us a good idea of what to expect on the styling front from the firm’s first-ever pure electric road car. But while it’s been happy to show off the Taycan’s exterior, Porsche has been reluctant to give us a glimpse of the sedan’s interior.

However, that changed on Tuesday when Porsche issued a teaser image to announce the Taycan’s Apple Music integration. We’ll get to that Apple deal in a second, but first, let’s talk interior styling.

Even though the Taycan is a new kind of vehicle for Porsche, the company is taking a classic design approach with its first electric vehicle. In fact, the Taycan even retains Porsche’s signature digital and analog stopwatch on top of its dash, despite being a fully digital vehicle. For those who like Easter eggs, note the time displayed in the lower portion of the dial.

The stopwatch is part of the Sport Chrono package in other Porsches, so that package will either be standard or available for the Taycan. In the Panamera, for instance, the package includes a drive-mode button on the steering wheel, an additional Sport+ mode, launch control, a Sport Reponse button for 20-second shots of extra power, and a digital display. 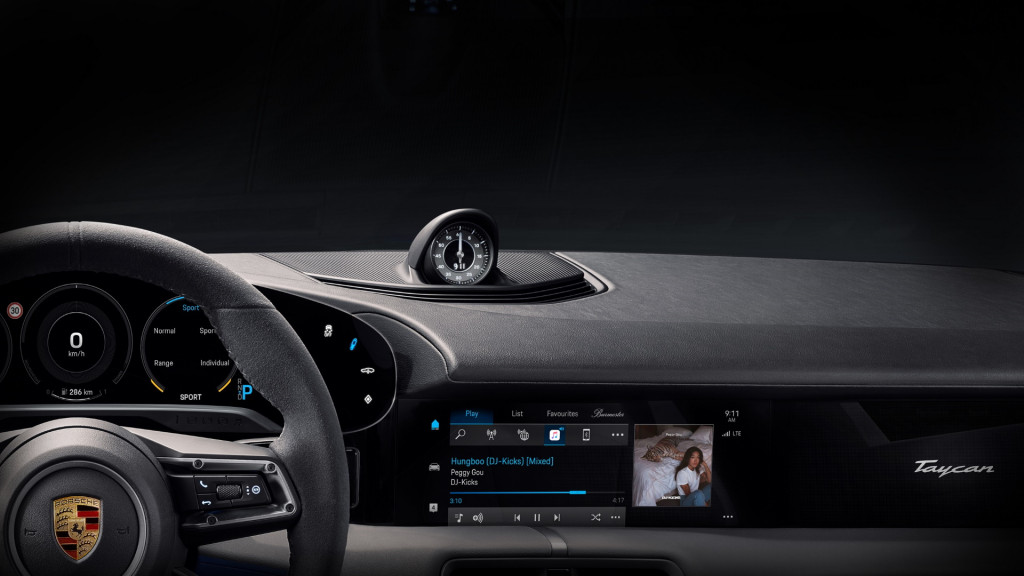 The Taycan’s upper dash design is similar to that of the latest 911. Two horizontal lines run the width of the dash, with an infotainment screen sandwiched between. Next to the screen is a stylized panel with the Taycan name scrawled across it.

The Taycan’s gauge cluster appears to be a fully digital unit with three main dials. The left dial is out of shot, but the center gauge has a readout for speed and, in place of Porsche’s typically center-mounted rev counter, a dial to keep tabs on power output from the electric motors. The rightmost gauge lists the Taycan’s various drive settings, which include Range, Normal, Individual, Sport, and Sport+. Given that the display is digital, Taycan owners will likely be able to customize it to their particular tastes and needs.

As for the Apple Music announcement, Porsche teamed with Apple to create the world’s first “fully integrated music streaming experience” in the new Taycan. The partnership will allow Taycan owners to stream more than 50 million songs from Apple Music completely ad free. Purchasing a Taycan will get you six months free of Apple Music or a three-month extension if you already have it.

To further enhance the listening experience, Porsche integrated a custom voice control system into the Taycan’s infotainment system to call up your favorite song, artist, or album from Apple Music’s extensive music library. You’ll also be able to create custom playlists, or enjoy ones curated from Porsche. The Taycan will be come with Bose or optional Burmester sound systems with Apple Digital Master to ensure optimal sound quality.

Porsche will officially unveil the Taycan on Sept. 4.