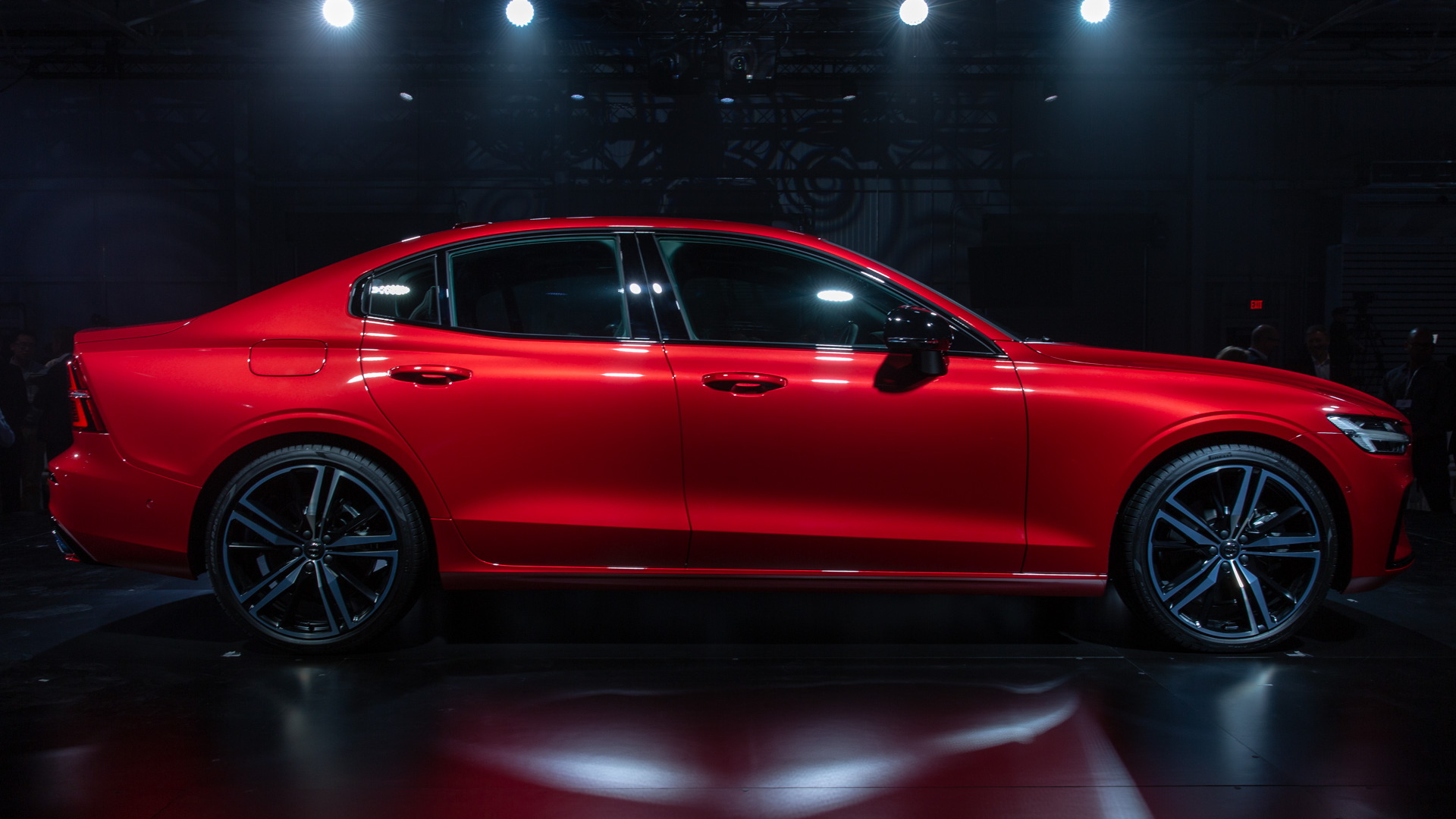 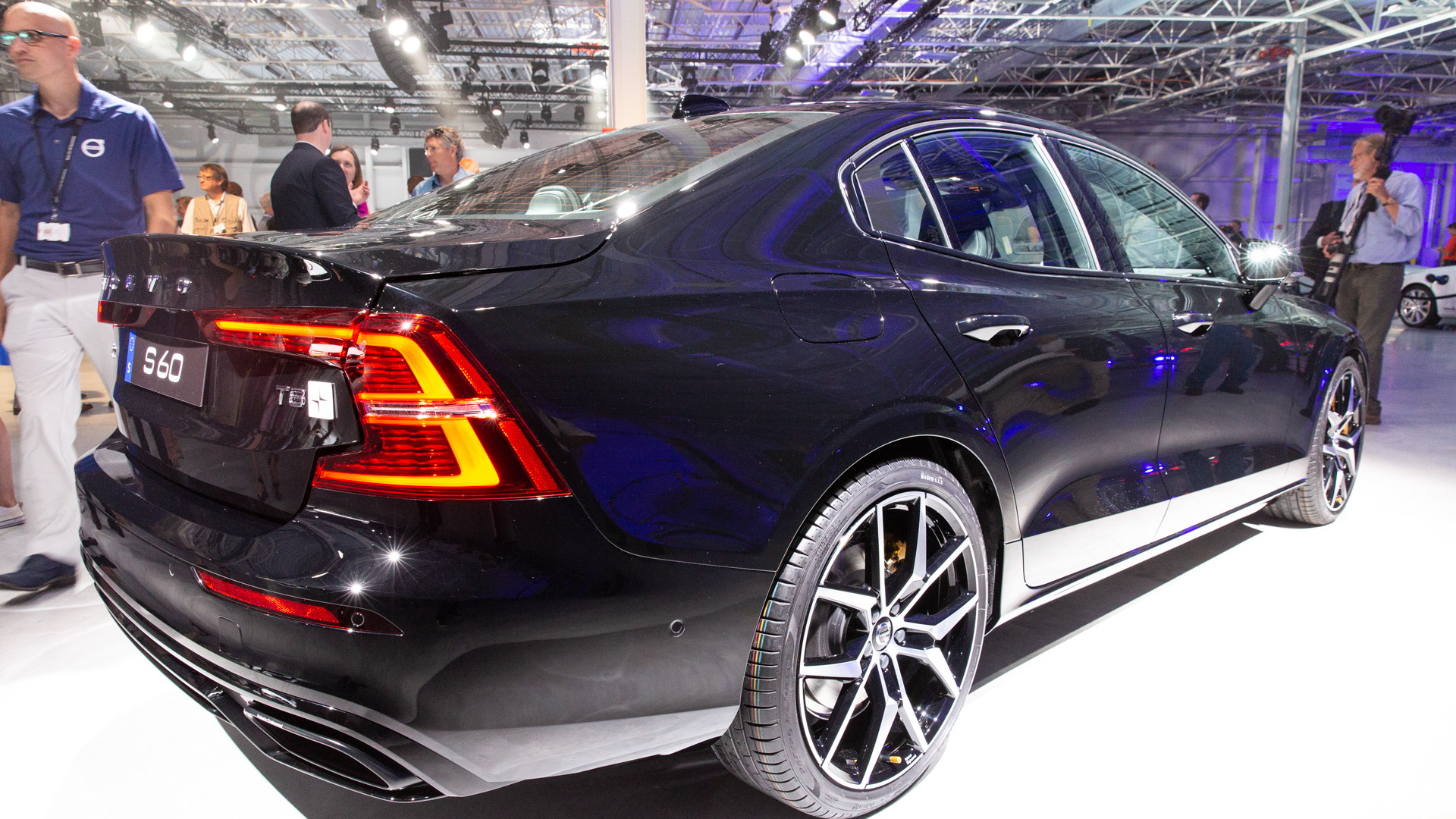 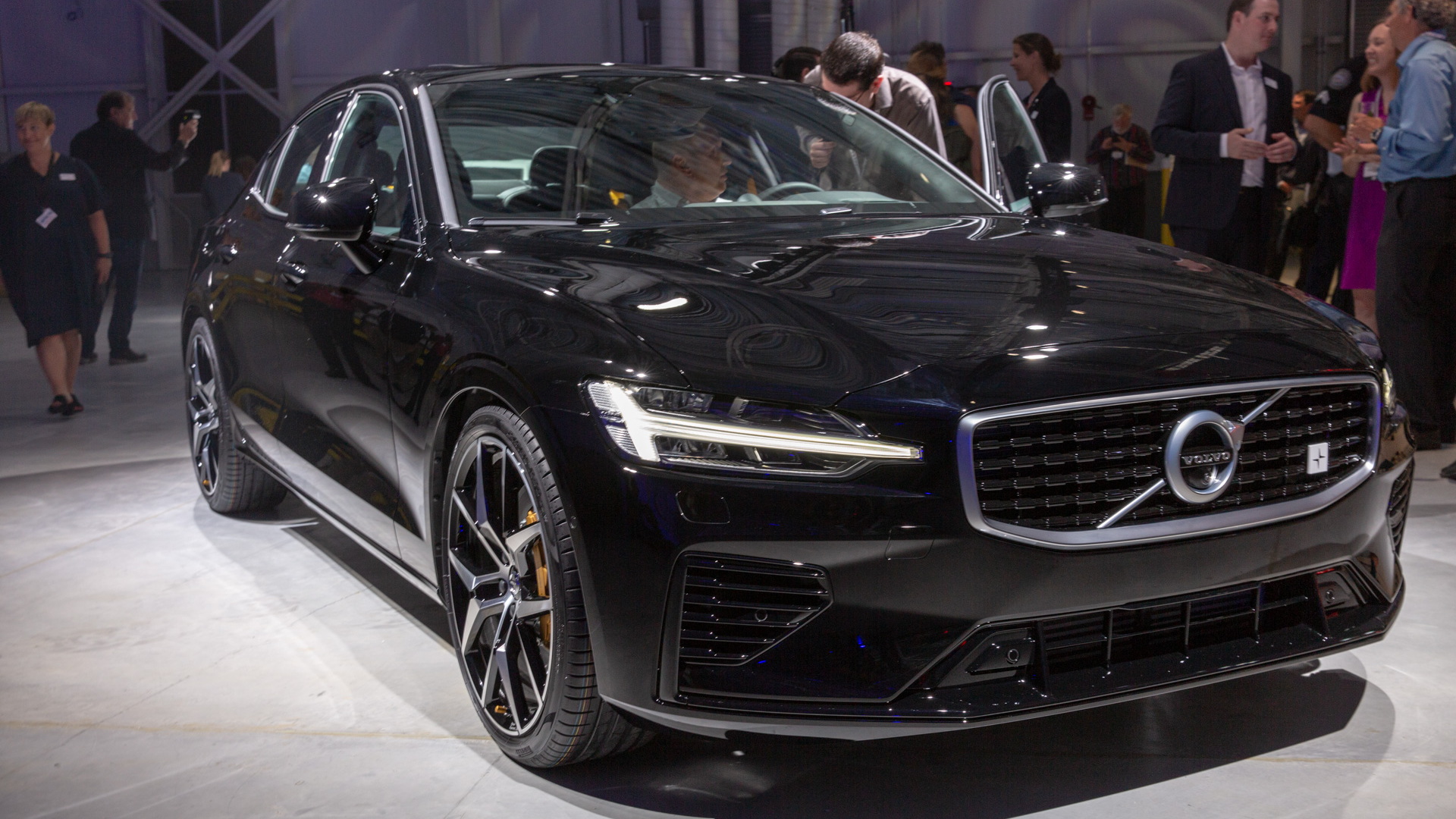 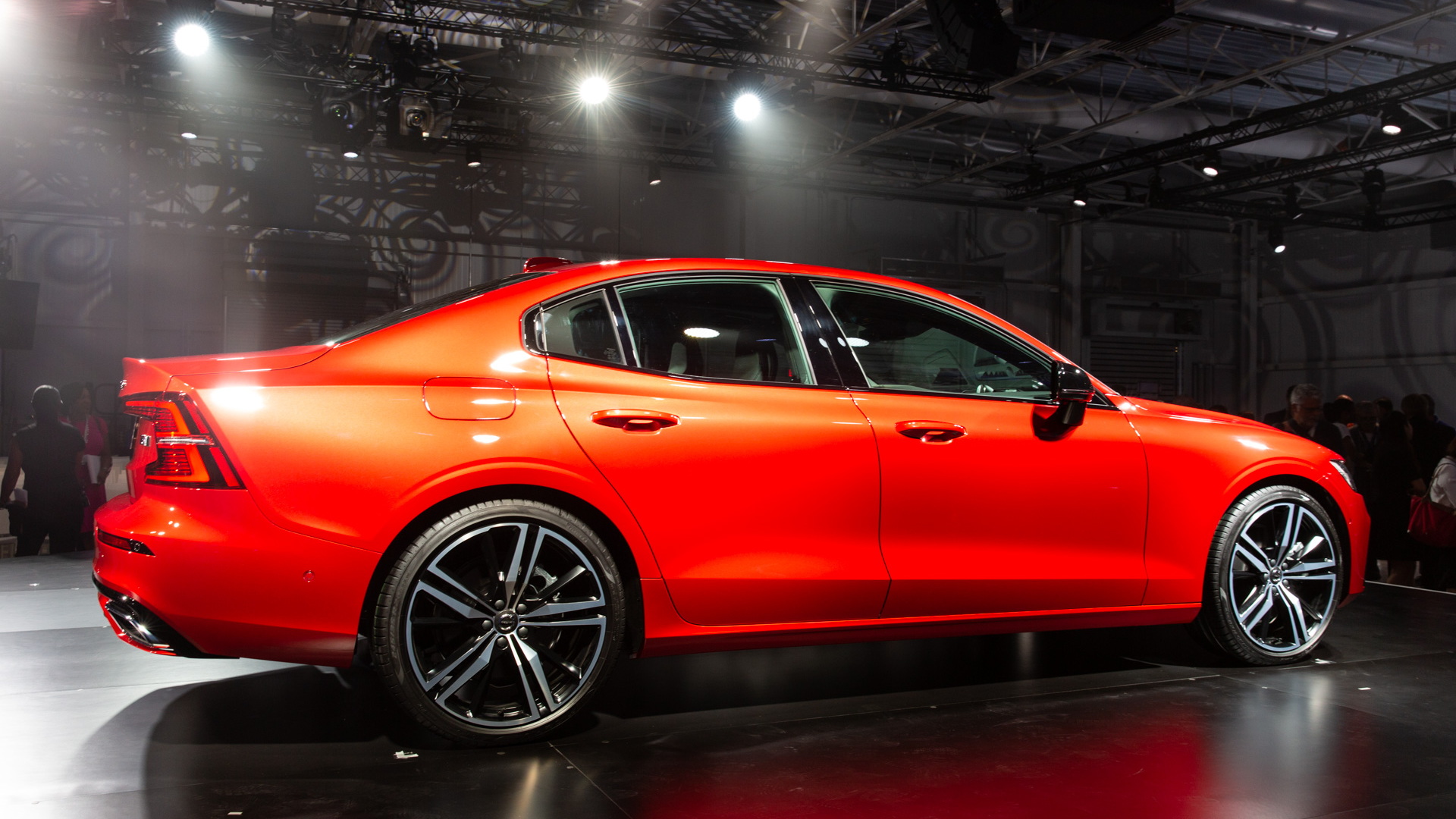 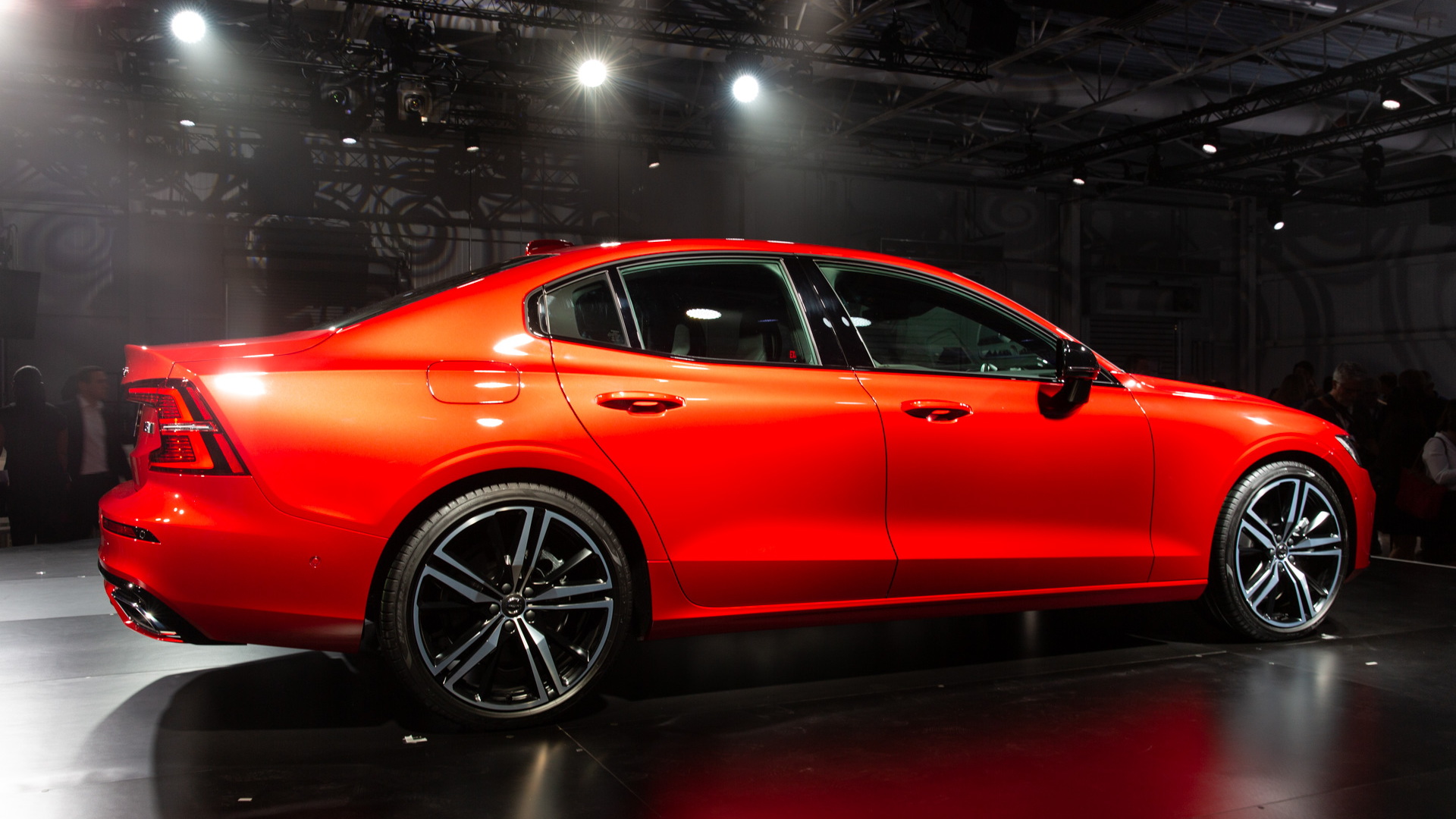 The 2019 Volvo S60 made its official debut Wednesday at the automaker's new plant in Charleston, South Carolina, with a lot of expectations riding on its sleek, four-door frame.

The S60 will be the first car produced on American soil for Volvo, the first without a diesel powertrain in any global market, and the first to feature prominently electric performance upgrades tuned by in-house experts Polestar.

When it goes on sale later this year, buyers and subscribers in the U.S. will choose among three powertrains in the new S60: a front-wheel-drive T5 that uses a 2.0-liter turbo-4 that makes 250 horsepower; an all-wheel-drive T6 that uses a turbocharged and supercharged 2.0-liter inline-4 that makes 316 hp; or a T8 twin-engine 2.0-liter inline-4 paired to a rear electric motor that makes a combined 400 hp. A Polestar performance upgrade adds 15 hp, performance-tuned suspension and brakes, and 19-inch wheels to that final T8 variant, but is available by Volvo's subscription program only.

A plug-in hybrid T6 will be sold in other countries, but won't be available in the U.S.

An 8-speed automatic is exclusively mated to all powertrain configurations.

Wrapped around those powertrains is a sleeker package than the last-generation S60, which made its debut in 2011. The new 2019 S60 sports styling cribbed from the larger S90, including prominent "Thor's hammer" headlights up front and an upright grille. The S60's relatively puckered snout compared to other luxury sedans hints at the S60's mostly conservative design in other places.

The body sides flow simply toward the rear tail, with deeper stamps and creases toward the bottom of the doors to lower the car's visual weight. The S60 doesn't sport the same long trunk found on the S90; the tail rises at the end and kicks up toward a small rear lip.

In back, the S60 borrows the S90's C-shaped taillights that are slightly toed-in compared to the S90. The wide "Volvo" badge has been moved from between the taillights to under the rear tail compared to the larger sedan, and the S60's exhausts are finished with dual- or quad-tipped outlets, depending on trim.

Inside, the S60 uses the same tablet-style Sensus touchscreen found in the related XC60 crossover SUV and V60 wagon with Apple CarPlay and Android Auto compatibility. All S60 sedans are equipped as standard with active safety features including forward-collision warnings with automatic emergency braking, pedestrian, bicyclist and large animal detection. Volvo's driver Pilot Assist is optional and can keep the S60 centered in its lane up to 80 mph, and Volvo says it includes better curve control, aided by GPS.

Like the V60, the S60 is longer than its predecessor with roughly two more inches of rear seat leg room, same as the V60. It rides atop a wheelbase that measures around 113 inches from hub to hub, with 18-inch wheels standard on all four corners. Like the wagon and XC60, the S60 gets spend-up luxury touches like driftwood trim accents and perforated leather hides.

Volvo says the S60 will be available to order through Care By Volvo immediately, and dealers should start stocking the sedan sometime after September.

The plug-in hybrid T8 will arrive sometime after that, with the optional performance upgrades by Polestar offered in very limited numbers. The Polestar-tuned T8 will feature Ohlins suspension, Brembo brakes, and a 15-hp boost above the regular T8.

Prices start at $36,795 in base configuration for a T5 Momentum version and can run up past $56,000 for a T8 plug-in hybrid in the spendy Inscription trim. Subscription prices start a $775/month for a T6 all-wheel-drive Momentum model or $850/month for a T6 R-Design trim. Volvo didn't say how much the T8 version tuned by Polestar would cost.