Behind the 2019 Ram 1500’s muted styling update lies a wholesale rethink of the full-size pickup.

We’ve already previewed the Ram 1500, but we sat down at the 2018 Detroit auto show after the new truck’s debut with some of the automaker’s engineers and spokespeople to find out more.

Here’s what we learned.

Yet Ram took a more wholesale approach than simply reaching into the proverbial parts bin. For one, the truck’s new ladder frame features a pair of octagonal rails that support the front bumper structure. Instead of jutting directly away from the engine to hold the bumper, they sprout out toward the corners. They’ve been designed to bend away from the wheel wells in the event of a collision.

If the wreck is severe enough to push the wheels toward the cabin, new “tire blockers” jut out of the frame to reduce cabin intrusion. That last feature isn’t new, but it’s standard on every Ram—something Ford controversially didn’t do when it fitted something similar to certain versions of its F-150 and sent them to the IIHS for testing in 2015.

Ram spokesman Nick Cappa told us that it’s this kind of innovation, “that will allow body-on-frame trucks to exist in the future.” 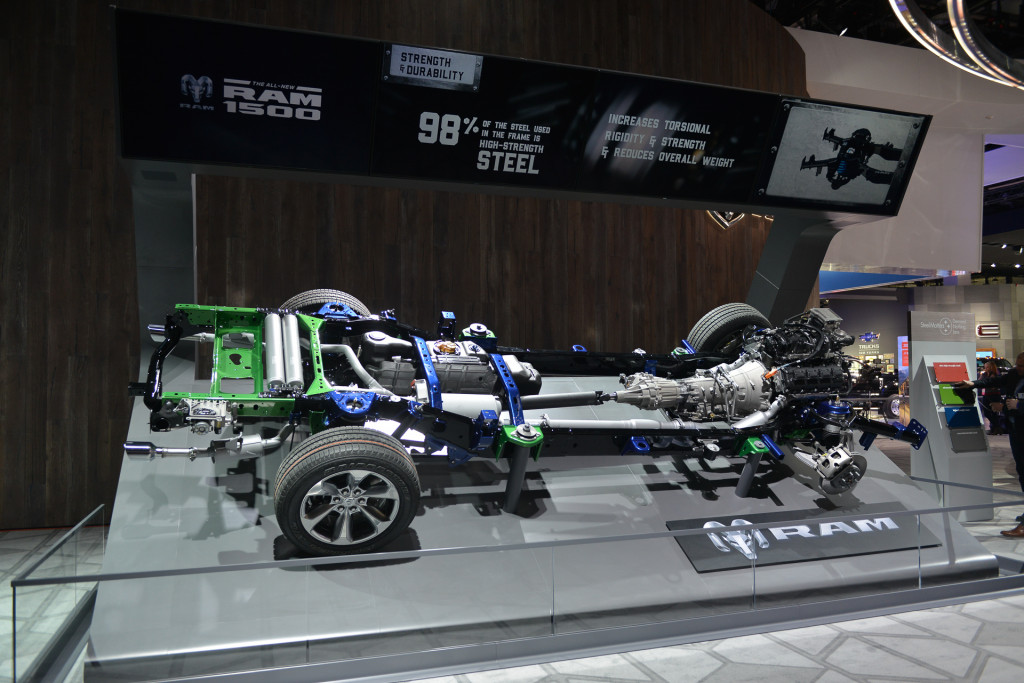 Hybrids for (almost) everyone

The 2019 Ram 1500 comes standard with a mild-hybrid system that the automaker says will reduce fuel consumption will simultaneously adding a noticeable amount of torque. Fitted to the 3.6-liter V-6 engine that’s standard equipment on the base Ram configuration, the mild-hybrid system adds 90 pound-feet of initial roll torque thanks to a 48-volt battery and a starter-generator that also acts as the alternator.

A similar system is optional with the Ram’s available 5.7-liter Hemi V-8, where it adds an impressive 130 lb-ft of torque at low rpms. Cappa told us that V-8s without the system will be marketed toward budget-conscious fleet and commercial rather than consumers.

The Ram’s eTorque Assist, as the automaker brands its system, isn’t fundamentally different here than it is in the 2018 Jeep Wrangler with the optional 2.0-liter turbo-4 engine. eTorque Assist-equipped vehicles can’t be driven on electric power alone, but the system provides some boost that should reduce fuel consumption, allows accessories like air conditioning to operate with the engine off at stop lights, and even balances torque to make the 8-speed automatic’s shifts a little smoother.

Ram locates the 48-volt nickel-metal hydride battery pack on the cab’s back wall. One additional efficiency-minded upgrade on all 2019 Rams is a system that uses heated engine coolant to warm up the transmission and rear differential gear oil on certain models. This lowers the viscosity of the gear oil, which means that the trucks won't have to work as hard in cold weather. It should also reduce wear and tear, Cappa told us. 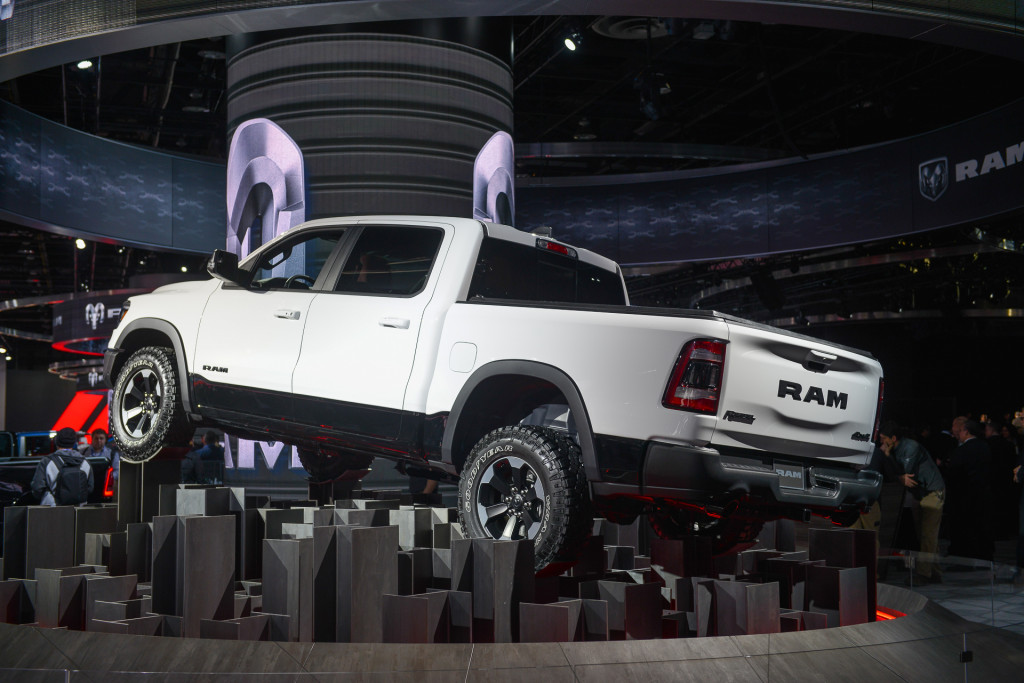 The Jeep Wrangler of pickups, kinda

The 2019 Ram 1500 Rebel is not a Ford F-150 Raptor rival. For now, that seems just fine with the Ram folks. The Rebel has been repositioned as less of a speciality model and more of a mainstream, off-road-oriented offering. It now comes standard with a coil-spring suspension that sits about an inch higher than comparable non-off-road Rams. An air suspension, which was previously standard, is now optional on the Ram Rebel. Only Ram Rebel models come standard with Bilstein struts with remote reservoirs and 33-inch Goodyear Wrangler Duratrac tires.

Though pricing hasn’t been announced, the suspension change should reduce the Rebel’s price of entry. 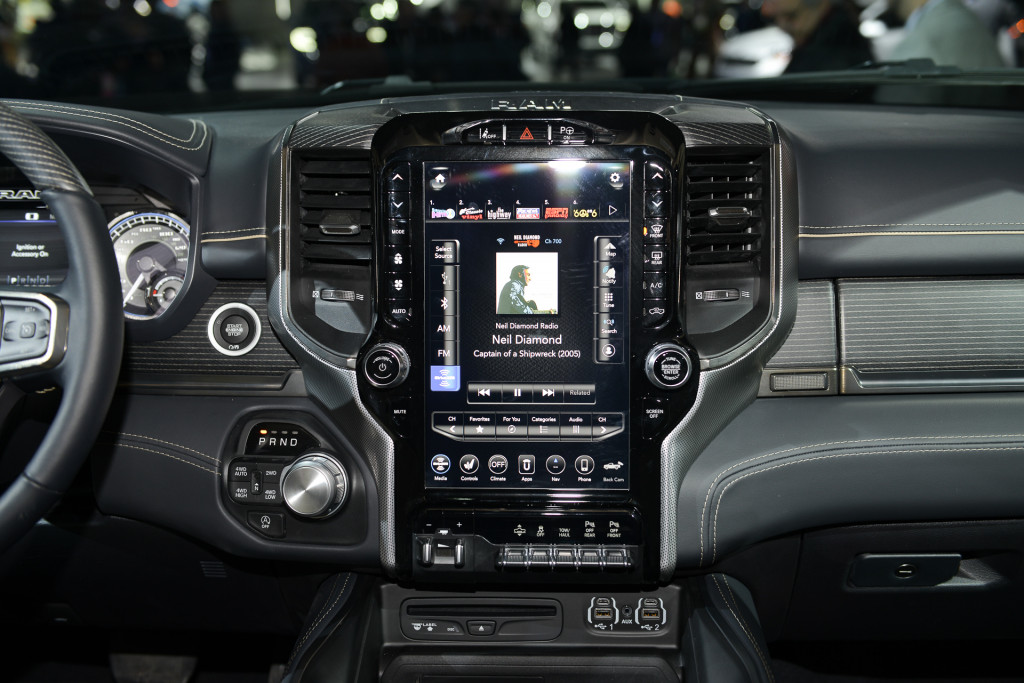 This enormous screen is the largest of three that Ram will offer, and it’s by far the best.

Its vertical orientation allows for a configurable split-screen arrangement  that lets drivers choose if they want to prioritize navigation, audio, or climate controls on top, for instance. The baked-in navigation system is easy to sort through, but we’re bigger fans of the Apple CarPlay and Android Auto compatibility that have never looked better on a big screen.

Additionally, the Ram’s cabin is littered with USB and USB-C inputs and it’s the debut platform for SiriusXM’s new 360L on-demand audio that lets users pick between songs, playlists, and podcasts stored in the cloud. Laramie, Longhorn, and Limited truck buyers can even opt for a 19-speaker Harman Kardon audio system—one of four available audio setups. 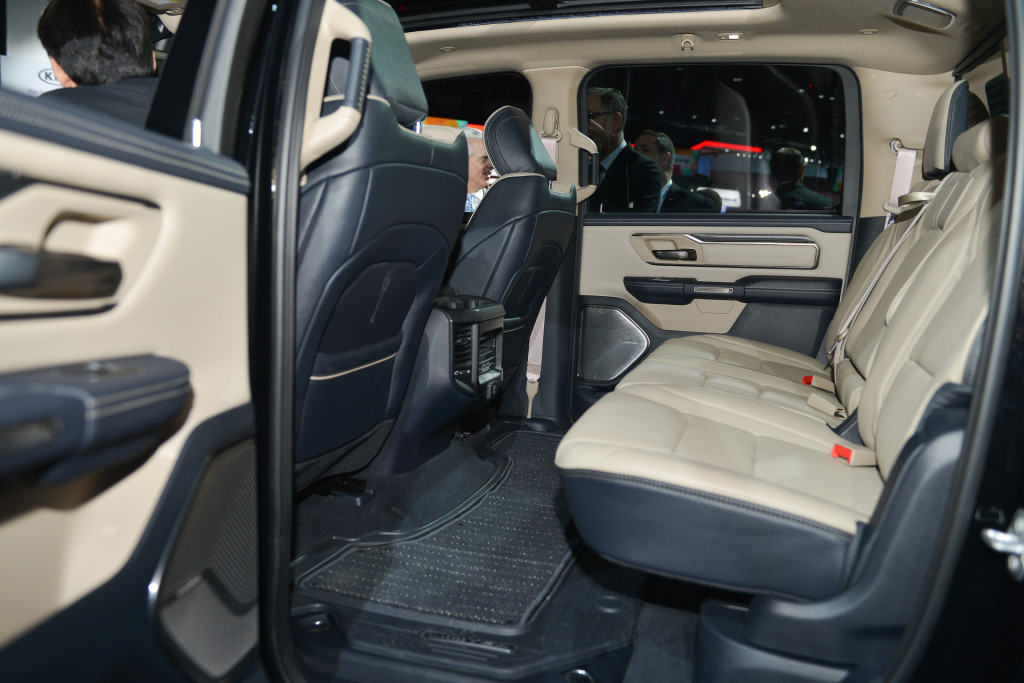 No more fighting for the front seat

Ram Crew Cab passengers might find themselves calling dibs on the back seat, rather than shotgun. At the tug of a lever, the back seat base slides forward and the backrest tilts rearward to eliminate the upright seating position so often found in pickups.

Higher-spec models will offer both heated and cooled second-row seats covered in soft leather, too, and rear-seat passengers have their own bank of USB and USB-C inputs.

When passengers aren’t situated in row two, the rear seat bases fold up at the tug of a lever to reveal an enormous flat storage area with a pair of hidden under-floor compartments below the floor mats. They’re just a drop in the bucket in terms of interior storage: Ram quotes nearly 40 gallons of interior bins, boxes, and cubbies, which is about double what any rival offers.