Nvidia kicked off the 2018 Consumer Electronics Show on Sunday by announcing a trio of new partnerships: one with ride-hailing company Uber, China's Baidu, and Volkswagen.

CNBC reported on the new partnerships, which positions the computer-chip maker as a force in self-driving technology. With Uber, Nvidia will supply chips for an artificial intelligence (AI) system in the company's fleet of self-driving vehicles. It will embark on a similar partnership with Baidu; the chip-maker will develop a production-ready AI system designed for China.

German company ZF will also help with the project. The Baidu AI system will stem from Nvidia's Drive Xavier chip, which boasts full self-driving capability. With the Baidu partnership, it will be Nvidia's first commercial application.

As for VW, the automaker will utilize Nvidia's Drive IX platform to develop its next-generation of cars. The platform offers support for a wide-range of futuristic AI elements such as facial recognition to unlock the car, gesture controls, and a personal voice assistant. VW imagined an "intelligent co-pilot" onboard with the Nvidia platform. 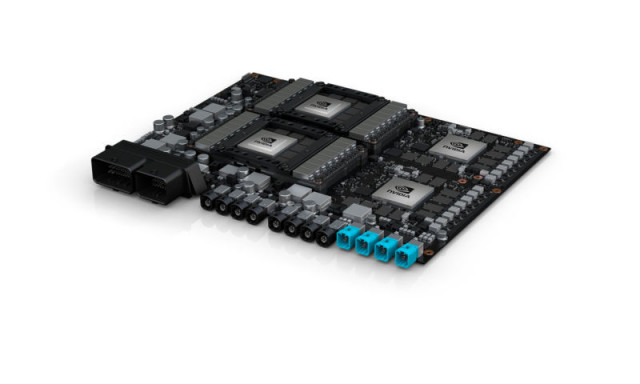 None of these partnerships include Nvidia's most advanced chip to date, however: Pegasus. The company revealed the chip last year with intentions to make Level 5 self-driving cars. The chip can handle 50 to 100 times more computational power than today's technology and extensively cuts down the amount of computing equipment. Notably, the amount of computing power housed within Pegasus reduces the amount of equipment from needed from a trunk-full to the size of a license plate. Automakers should gain access to the new chip in late 2018.