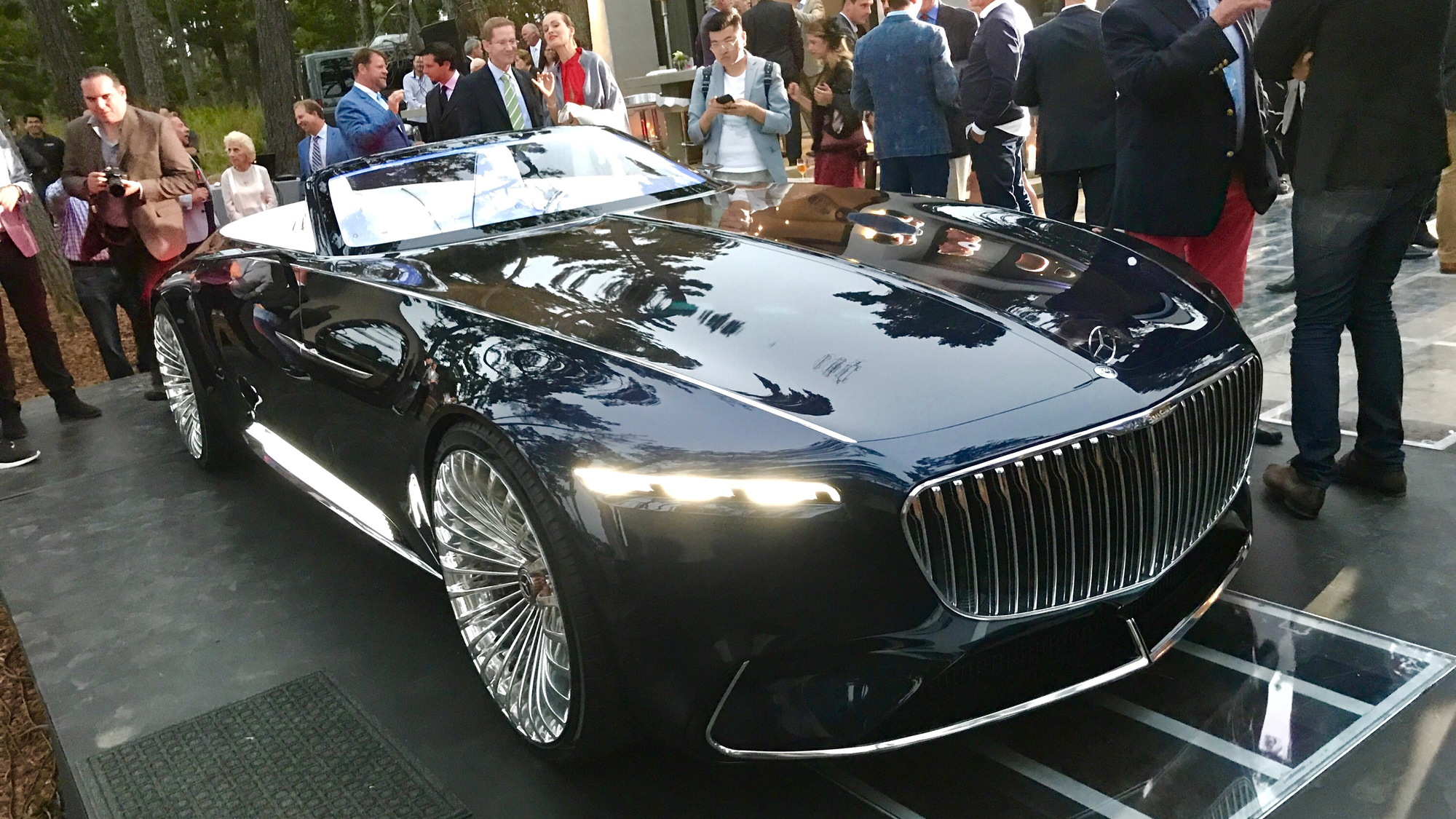 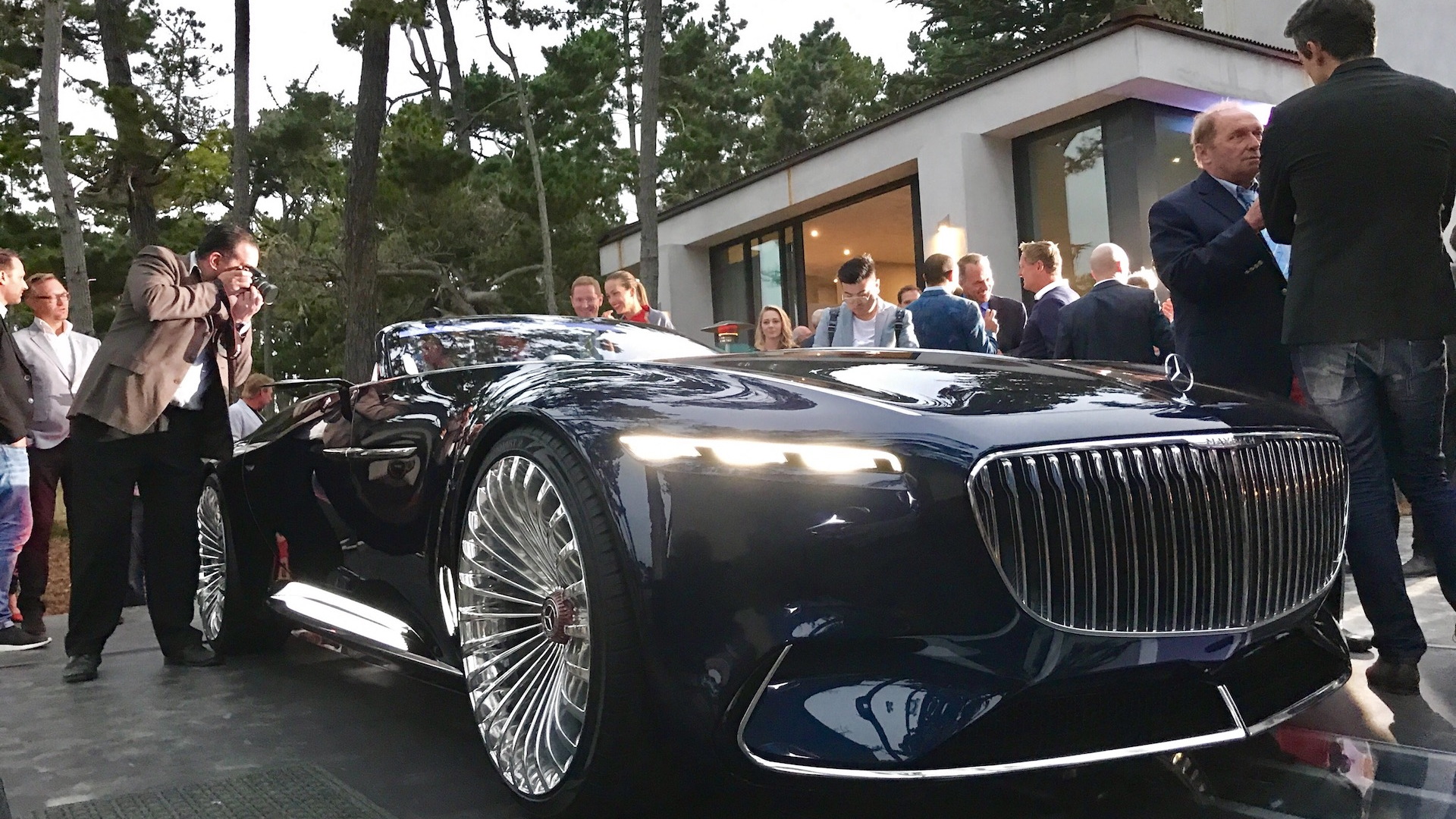 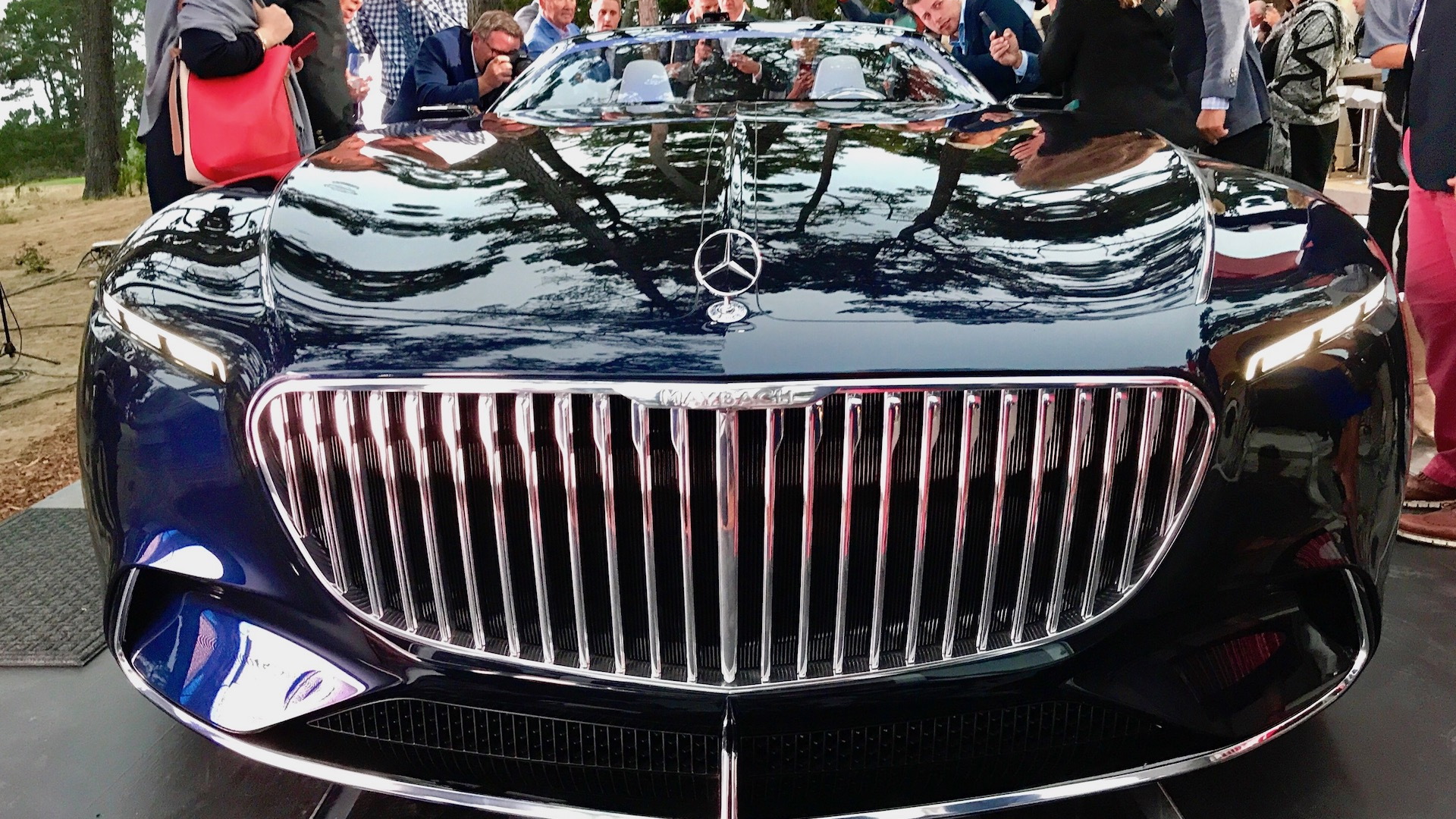 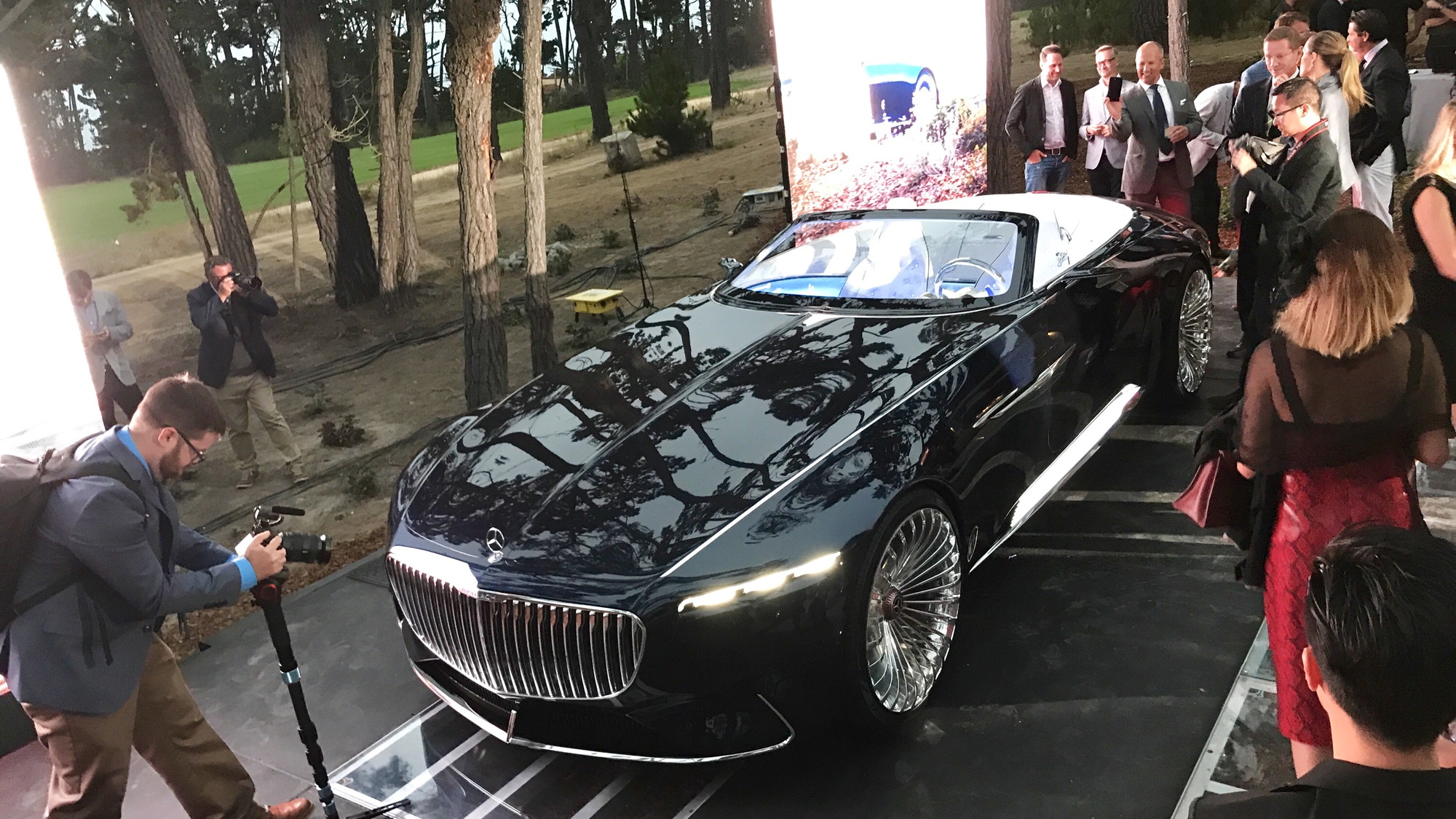 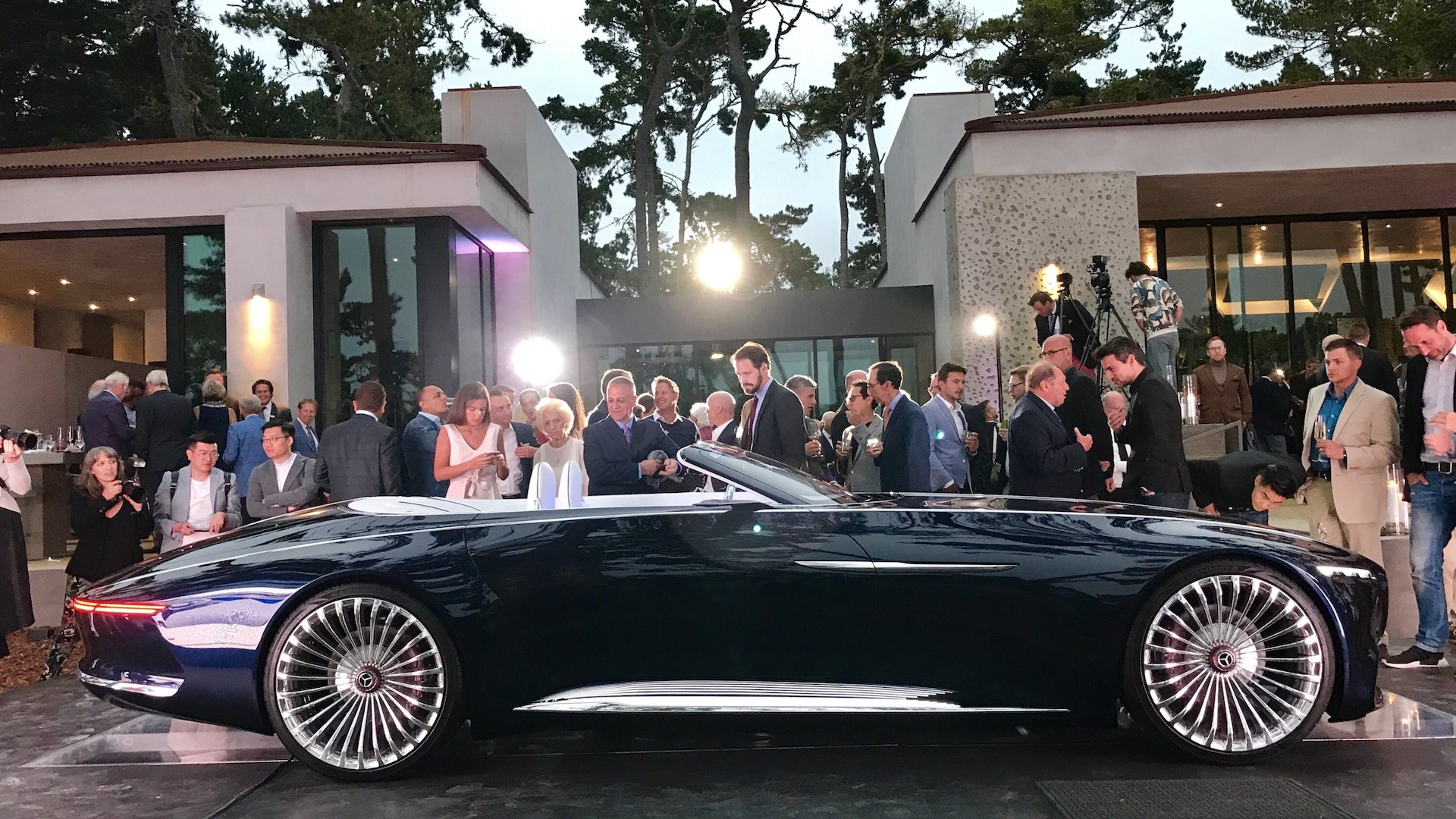 It's clear that the electric vehicles of the future will probably look like the cars of the past. At least, the expensive ones will.

Mercedes-Maybach pulled the cover off its latest concept car during Monterey Car Week on Friday night, the Vision Mercedes-Maybach 6 Cabriolet. The concept is a droptop version of the Vision 6 concept coupe that we saw last year. (The "6" refers to the length, nearly 6 meters long or 222 inches.)

Although functionally the same as the coupe concept, the Vision Mercedes-Maybach 6 Cabriolet loses the split rear window from last year's car in favor of a soft top roof and a yacht-sized rear deck. The interior looks largely the same as the coupe's: a hint of art deco, a little mid-mod, and a lot of money. The lounge-like accommodations inside look like they'd be equally comfortable with Frank Sinatra or with Frank Sinatra's hologram.

Interestingly, Mercedes is claiming specific details about the powertain, including the battery electric system that powers the Vision 6. Mercedes claims that the Maybach concepts are powered by four electric motors with a combined motor output of around 750 horsepower, a 200-mile all-electric range, and a 350-watt DC fast charging system that can gather 60 miles of electrons in less than five minutes. That kind of specificity is somewhat rare for the concept-car world, many may as well run on weaponized unicorn tears.

To our eyes, there's no functional reason that the Vision Mercedes-Maybach 6 needs an Olympic-sized hood, but the automaker has answered our questions and solved a long-running problem for electric cars: "Whatcha got under there?" Under the butterfly hood cover, the Maybach reveals a beautifully finished, customized storage cabinet for umbrellas, drinks kits, chinaware, or custom-sized luggage. It may well be the most expensive pattern block puzzle for adults in the world.

There are details that won't make it past the lawn at Pebble too, we'd guess. The alien spaceship dash and exposed transmission-tunnel tentacles live in the fantasy world, for example. And the Maybach appears to be missing turn signals, which won't be a problem in Florida but will be everywhere else.

Vision Mercedes-Maybach 6 may have a future in production at some point soon, as the automaker has hinted before. The hood, rear end, and tall grille seem to be in line with the ultra-luxury brand's styling ethos.

We may be getting a sneak peek at the 2117 Pebble Beach Concours d'Elegance winner. For more Pebble Beach coverage, visit our dedicated hub.