General Motors this month finally sold its struggling European unit Opel (along with Vauxhall, Opel’s brand for the United Kingdom) to France's PSA Group after racking up two decades of losses totaling close to $20 billion. However, it’s unlikely the automaker has finished its downsizing.

It’s a process that’s been in the works for several years and in addition to the offloading of Opel has also seen GM scale back operations in some countries, namely Australia, Indonesia, Russia and Thailand, as well as reduce the number of platforms it uses.

Shown below is a slide presented by GM during an investor meeting on March 6 to announce the sale of Opel. It provides insight into why GM decided to sell Opel and may hint at further downsizing to come. 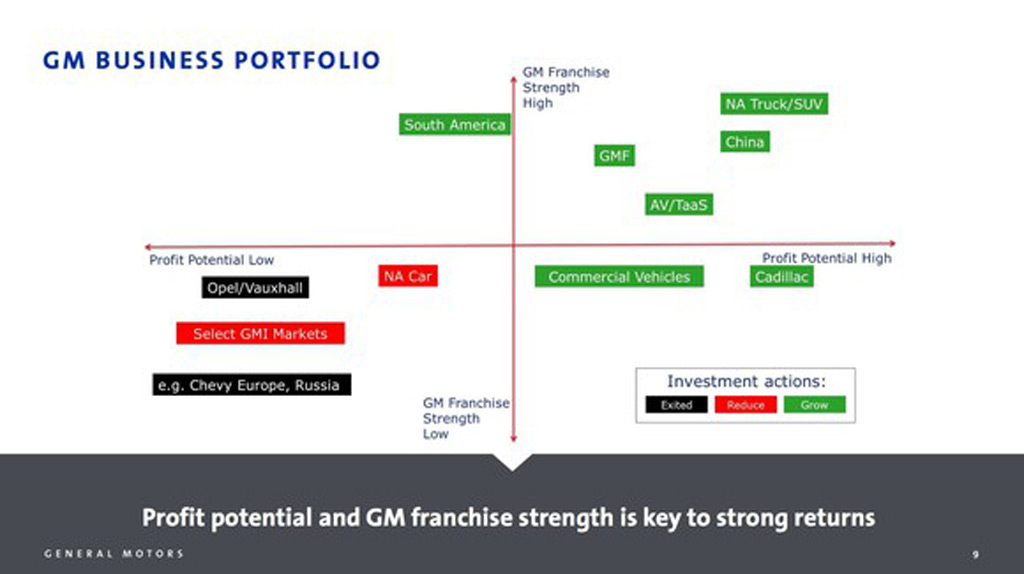 The slide shows that GM is looking to reduce investments in its car products in North America, and in its operations in some “GMI” markets. GMI is GM’s main global unit and covers markets as diverse as Africa, Asia, the Middle East, and the Pacific nations including Australia and New Zealand.

On the flipside, the slide shows that GM sees serious profit potential for pickup trucks and SUVs in North America as well as the Cadillac brand on the global stage. Crucially, GM has also listed the new business area of AV/TaaS (Automated Vehicles and Transportation as a Service), which represents self-driving cars and mobility services, as having strong potential for profit.

It’s clear that GM is changing tack to favor profits over volume and global market presence. In fact, with the sale of Opel, GM is tipped to drop to fourth place among major automakers in terms of volume, behind the Volkswagen Group, Toyota and the Renault Nissan Mitsubishi alliance. As CEO Mary Barra explained in a conference call to detail the sale of Opel, “Our overall philosophy is every country, every market segment has to earn its cost of capital, has to be contributing.”