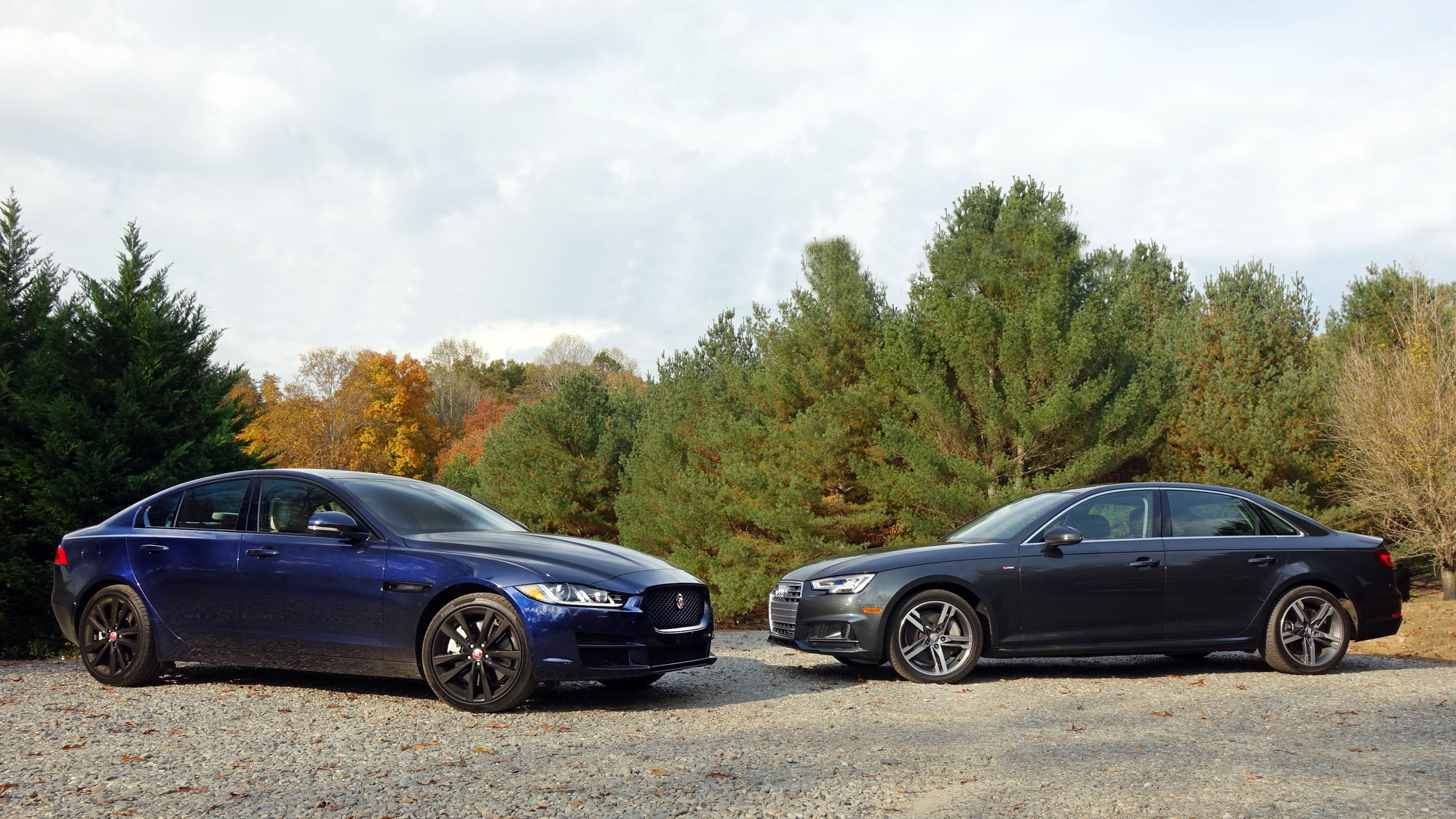 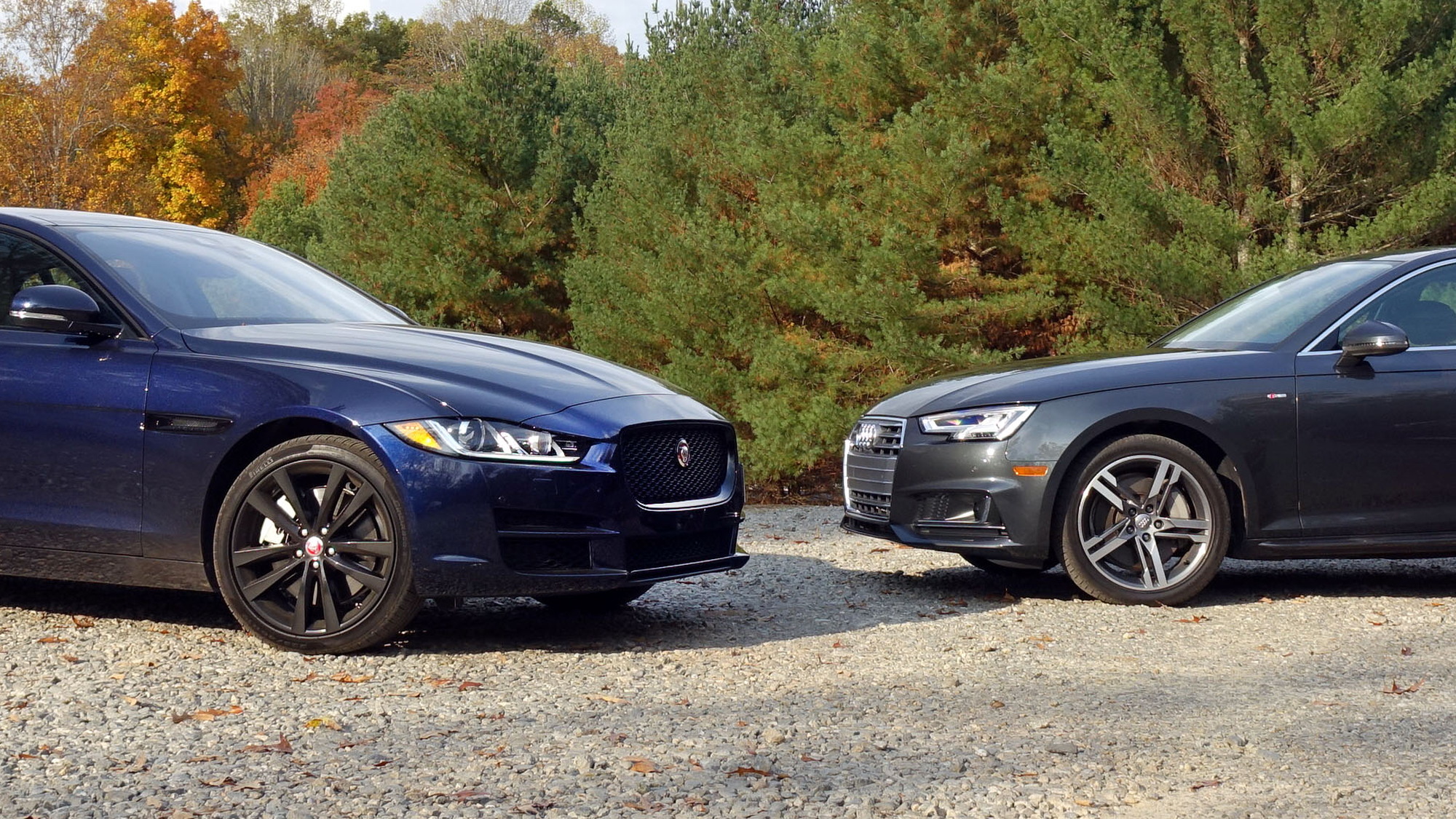 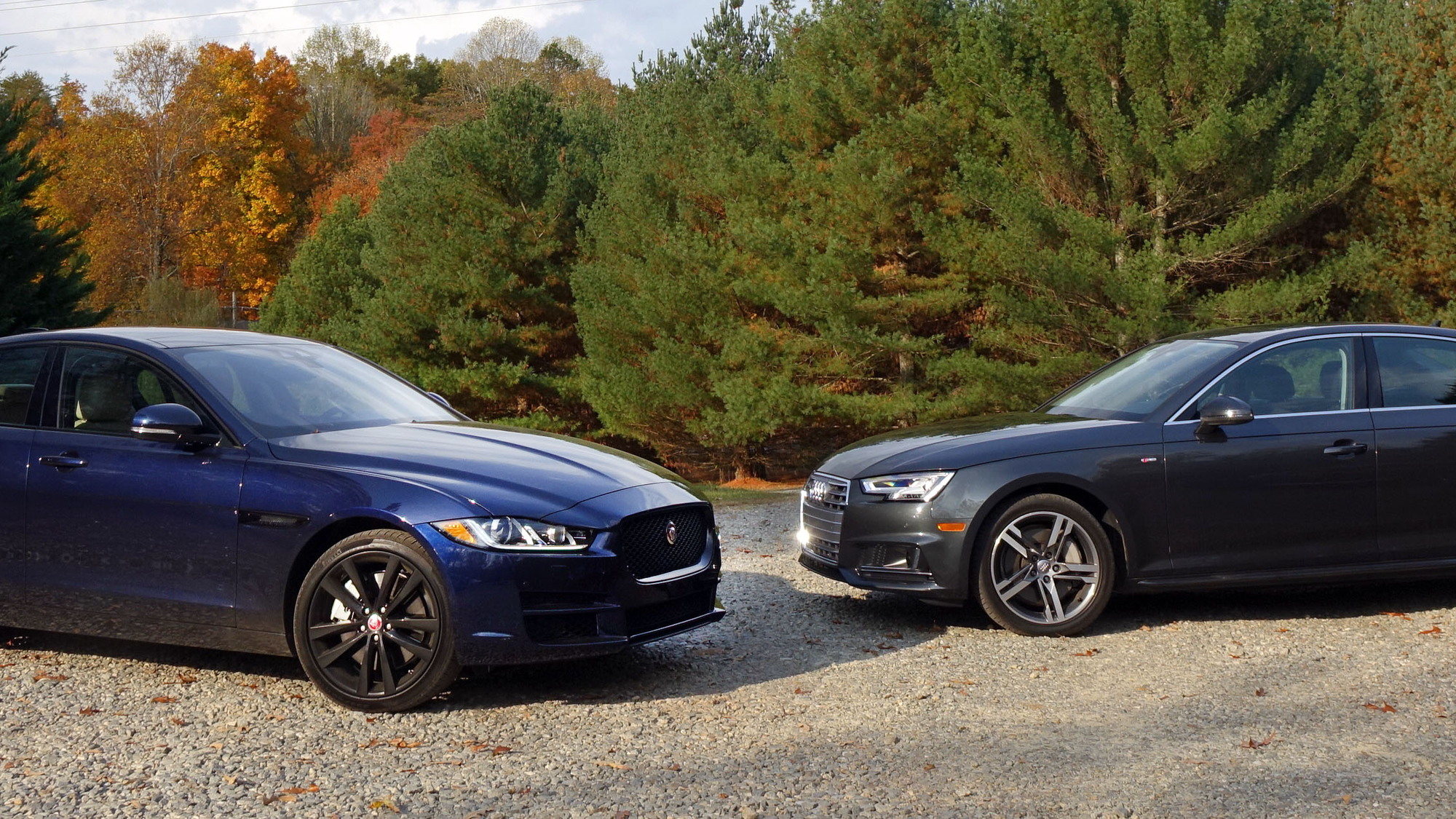 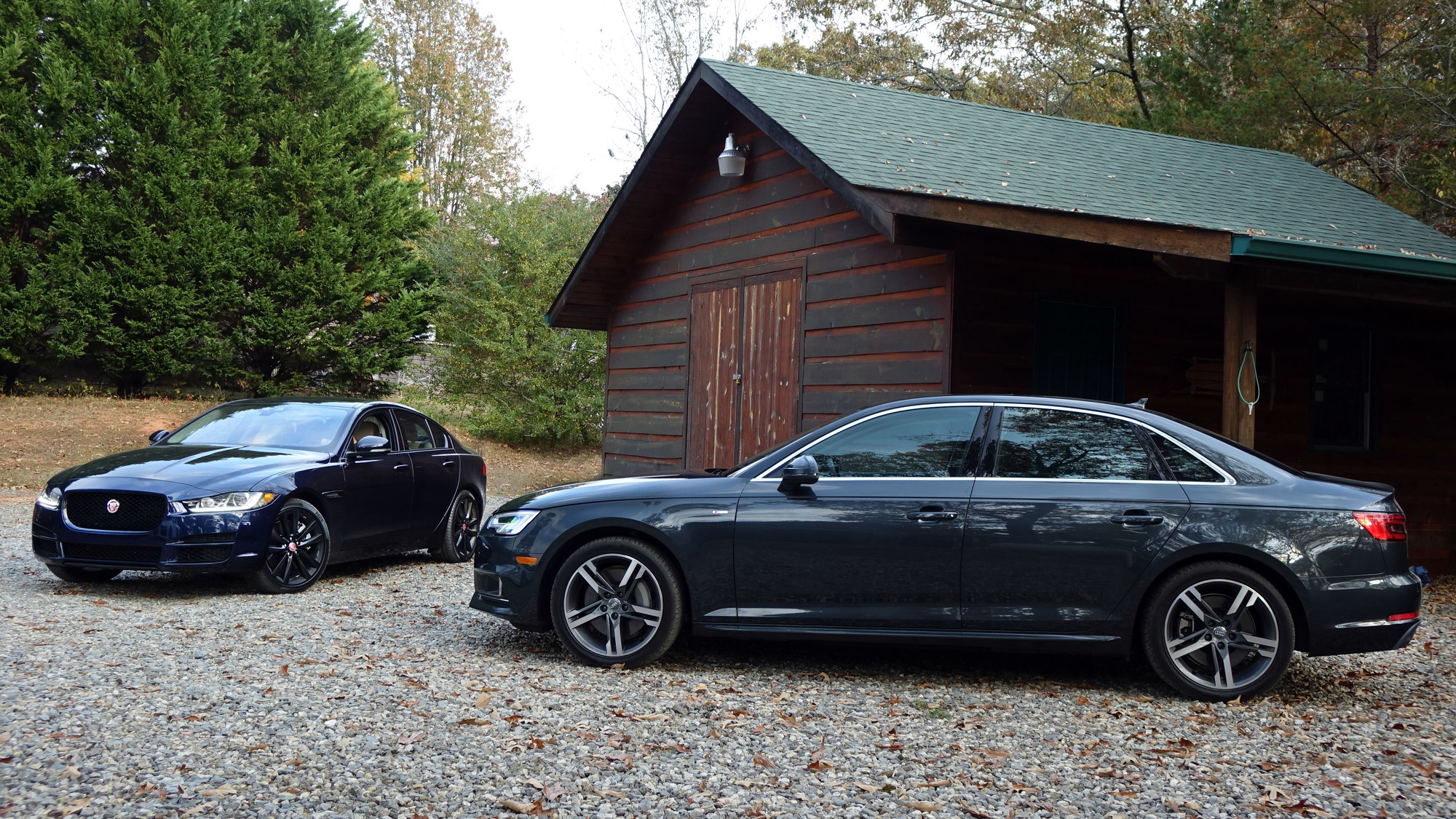 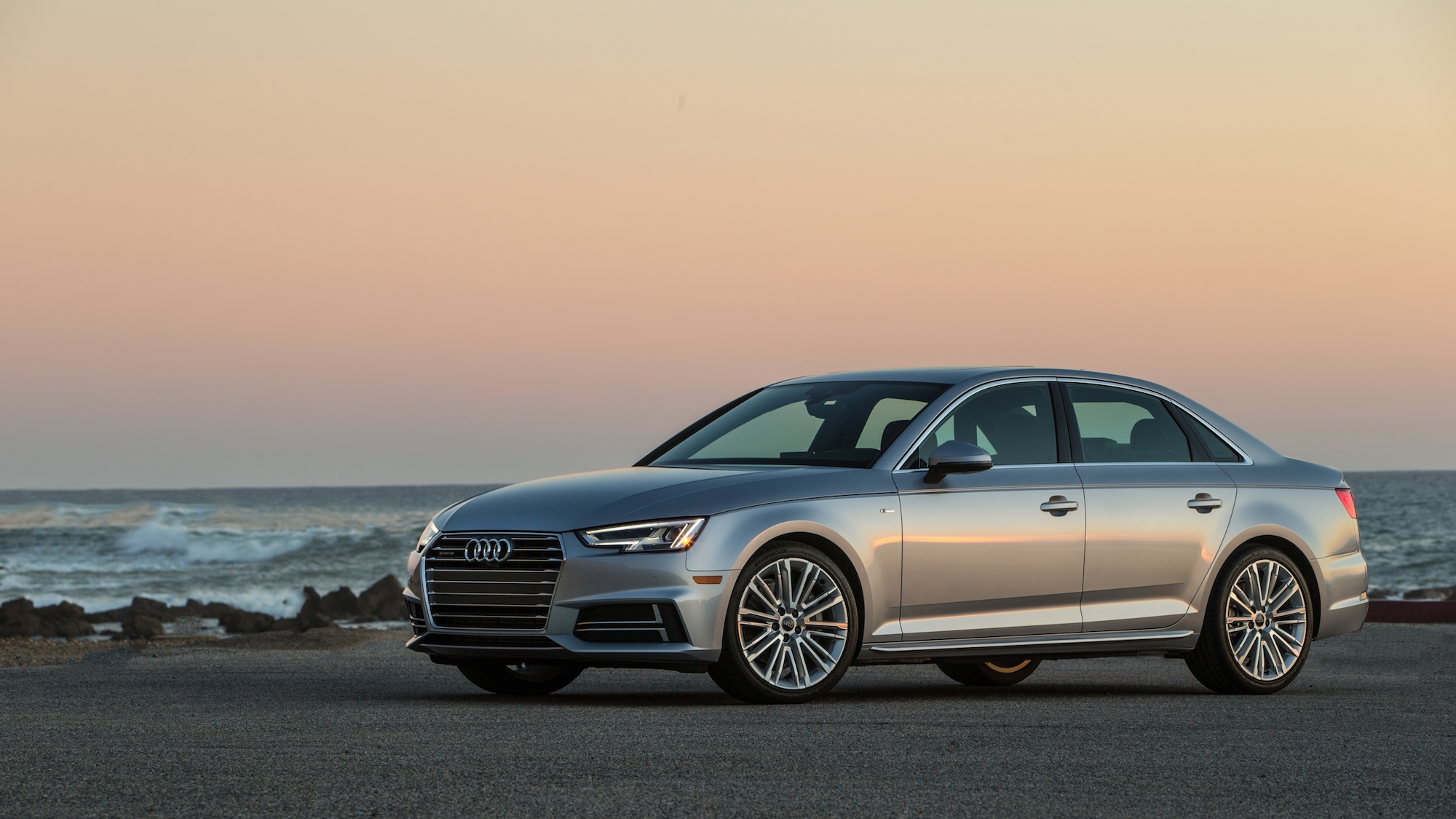 It's a question we've been asking ourselves since the 2017 Audi A4 and the 2017 Jaguar XE first rolled into our driveways: which one's better, and can either of them ascend to the 3-Series' old slot as the top compact sport sedan?

We find no shortage of irony that the staid British luxury brand is the upstart in this affair. Perhaps if the Jaguar XE’s seats were made of tweed, we’d feel more comfortable about the new four-door sedan.

Geographical generalities aside, we’re finding ourselves double-taking all the differences between the XE and the new Audi A4.

For the record: We were very nearly over the moon with the new XE. When it arrived on our shores, we were smitten with the drivability and fun from Jag’s newest sedan. The only negative was the fact that it had was born alongside, and therefore overshadowed by, Jag’s new F-Pace crossover SUV.

Similarly, the timing of the latest generation A4 could have been better, too. Audi is involved in a little dust-up over its engines, you may have heard, and the A4 looks so close to its predecessor that even fastidious Germans would be hard-pressed to spot the alterations. Overall, the sedan is a dead-ringer for the family, even if it rides atop of a new platform and with sharper lines.

But both cars impressed us enough to qualify as finalists for our 2017 Best Car To Buy award. So, we brought them to the hickory-smoked hills of north Georgia for a thorough what for. A winner emerged relatively quickly, but not from outright excellence.

I know, I know, hold on. Let me explain.

The newest compact sedan arrived on our shores for the 2017 model year, rejuvenating the segment in a way we haven’t seen in a while.

Starting with Jaguar’s steadfast resolve to bring a diesel powertrain after Audi’s (and parent-company Volkswagen) public flub, the small XE seemed like a breath of fresh air in a segment that had started to grow stale.

The XE’s competence in corners is intoxicating. In both versions we’ve driven, gas and diesel, we couldn’t find fault in its flat character and willing attitude to devour the line, hold it, and ask for more.

(While we’ve driven the 180-horsepower 2.0-liter diesel XE, we’ll keep most of the powertrain comments confined to the 340-horsepower, 3.0-liter supercharged V-6 that we used to blitz the back hills of rural Georgia. Please remember one thing: Even the base diesel has the XE’s best performance trait, which is its chassis.)

Starting at just under $36,000, the XE is a more graceful approach to back roads than we’re making it sound. Its drama-free attitude and street smarts proved to be a revelation for nearly all our editors who took the wheel. Editorial Director Marty Padgett surmised: “First sport sedan in a long time that I've thought could use a little more damping. Leans but in a composed way, and doesn't hammer through corners as much as glide through them.”

The XE is gifted with one of the best steering racks we’ve found in the segment for quite some time, BMW’s lost its touch thanks to a maniacal devotion to run-flat tires, and Audi and Mercedes seem uninterested in the idea. Senior Editor Andrew Ganz agreed: “The XE reminds me of the way BMWs used to be, with its predictable rear-wheel-drive dynamics and its good steering.”

Senior Editor Kirk Bell noted the discrepancy between the two engines, and we started to get the feeling that this could be a landslide victory.

But corner after corner, as the miles marched by, we became less occupied by the stellar ability to take a set and started to move to everything else.

Short font doors made for awkward elbow ergonomics for taller drivers. In fact, as we climbed behind the wheel time and time again we noticed that our heads were positioned behind the B-pillar. That’s not a huge inconvenience, but the chunky door divider stayed in our periphery nearly the entire time.

Ganz was apparently reading over his shoulder, too: “Its interior is stark, its back seat tight, and its infotainment crashed for all of us (even though I actually like its menus and its navigation).”

That’s true. Despite a beautifully large 10-inch screen bezeled into the center stack, we hopped into the XE after a dash in the A4 and the screen went blank. Not a good start. The menu system is bright and sharp, good resolution and an honest-to-goodness intuitive layout that’s not called “Apple CarPlay.”

For the driver, the XE is eager to reward. If you’re a passenger in the experience, there are a few things left to be desired.

"What's up with some of the Jaguar's interior materials? The plastic over the IP is Chevy Spark quality, and there are some other hard plastics that fail to impress. The overall look of cabin is also almost painfully simple. There's no design flair here like there is on the exterior, but a lighter color upholstery does add some visual interest," Bell said.

The view from the rear seats isn’t entirely comfortable. We found the front chairs to be lacking enough scallop to wedge our knees in the back, and while we found that we could clone ourselves and ride in the back, we wouldn’t want to do it three abreast. The XE is a party of four.

The potent engine and exceptional thrust is hard to ignore, however, even our love affair with the powertrain waned.

“The start/stop is atrocious,” we wrote. “The V-6 sounds choked from the inside.”

“Car makes no qualms about being a BMW rival. I wish the engine were a little less cocky and vocal, though. Just as loud but not nearly as smooth to wind out as it wants to be,” Padgett wrote.

It’s beautiful in approach, but its details are better at arm’s length. Even the upstart can’t break from tradition, it seems.

Audi A4: the basics

“Guess how much that A4 is,” I said, staring at a short slab of Fat Matt’s ribs and a long ride ahead to Blue Ridge, Georgia.

“I don’t even want to know,” Ganz said. (Was he talking about the ribs and the ride, or the price? Maybe both?)

The new A4 has grown up in size and price. While it’s only added half an inch in wheelbase from the last generation, the sharper lines and crisper hood hint at a more elegant mission than early sport compacts. The Audi A4’s cabin is so quiet on a highway slog, a stomach coming to grips with a rib sandwich sounds like thunder next door.

In many respects, the A4 is a very different approach than the XE. Where the XE makes a promise in big ideas, the Audi starts with the details. About 100 pounds were lost in the overall structure with use of more lightweight steel; the grille is a little wider and lower than last go-round to look a little squarer on the road; the trunk floor is just a hint lower for easier cargo loading.

“So anonymous in styling. This is the company that did the TT and R8? Where's that kinship?” Padgett asked.

Its kinship begins and ends with the so-called virtual cockpit Audi planted in the A4. A gorgeous 12.3-inch high-resolution display in front of the driver relays information such as navigation, infotainment, and phone controls to the driver, sandwiched between speed and tach gauges.

Virtual cockpit is how good ideas are done better.

The difference between the R8 and TT’s application of virtual cockpit and the A4’s is in the redundant infotainment screen perched between driver and passenger. The A4 adds an 8.3-inch screen to display nearly the same information to passengers, including navigation and infotainment, but uses MMI’s click wheel to control the menus—even for Apple CarPlay. It's clunky and difficult to use without taking your eyes off the road.

Under the hood and between the wheels, we couldn’t ignore the obvious. The Audi’s 2.0-liter turbo-4 was no match for the Jag’s supercharged V-6 and nimble attitude. The engine has always been in the wrong place for the A4—over the front wheels for an all-wheel-drive car is less fun than vacation Bible school.

The Audi had plenty of hustle, and when coupled with optional adaptive dampers it made the most of its somewhat course direct-injection turbo-4. It’s 85 percent of the performance (of the XE) with 100 percent of the right attitude.

"Both engines are impressive. The Audi's 2.0-liter turbo is one of the strongest of its ilk, but the Jaguar's 3.0-liter supercharged V-6 is in another league," Bell wrote.

Long slogs and twisting corners didn’t confuse the Audi, even if it fell back when chasing the XE a couple times. But the best parts weren’t its outright capability, rather its composure and competence—and ability to get up off the stool and answer the bell even if it was outgunned on paper by nearly 100 hp.

“The A4 offers better visibility, a transmission that felt more aligned with its engine, and a manageably high-tech cabin,” Ganz wrote.

The A4’s steering could be stiff, but its ride was firmly more confident.

“Hard to beat its taut ride and sport mode responsiveness. Gets busy on main road but cuts through curves with a clearer sense of duty than the XE,” Padgett wrote.

The A4’s better than the sum of its parts. The Jag? Let’s talk.

If you’re thinking it was a tight race, you’re right.

The Jaguar’s XE faults almost made the car more likeable, right down to its engine configuration that couldn’t be more hopelessly British if it tried; to make a V-6 from a V-8, engineers just filled up two cylinders.

But we found fewer flaws in the Audi and more attention to detail.

Perhaps Ganz said it best: “It's the A4 that I'd buy and the XE that I'd lease. One of these will be dutiful over the long run, while the other seems like a wild adventure. At least as far as compact sedans go.”

For our money, today, the A4 is a better buy.