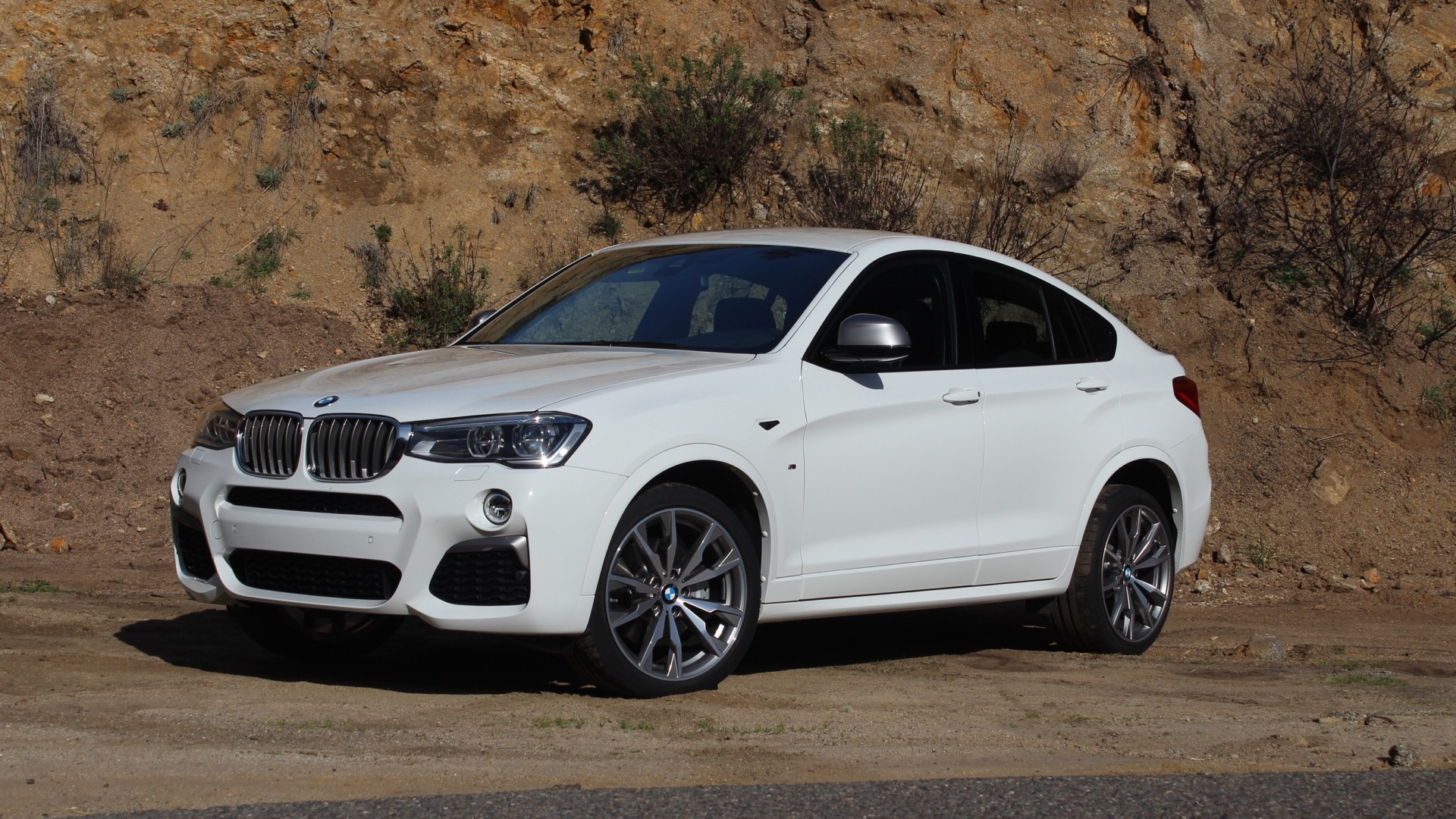 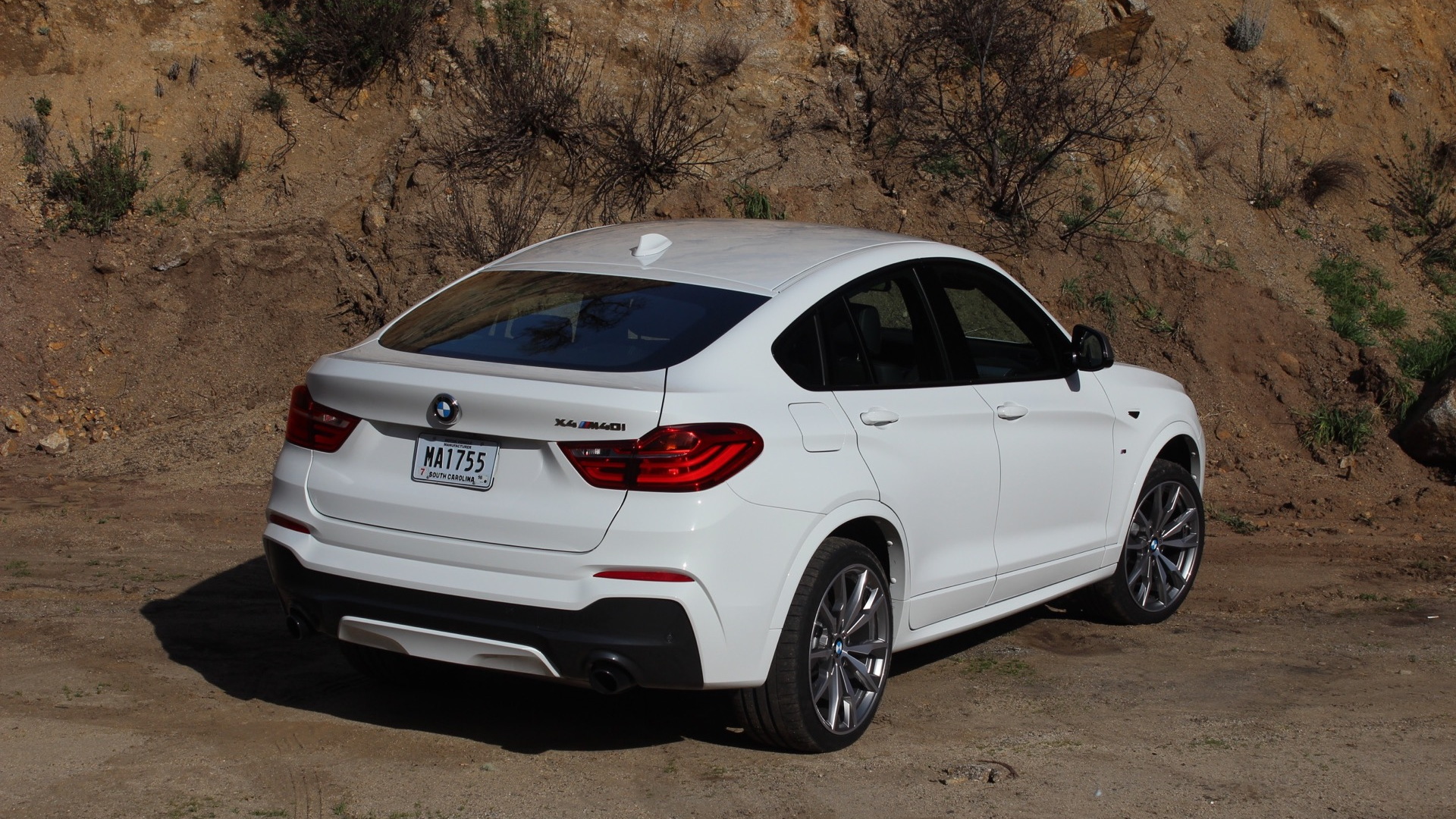 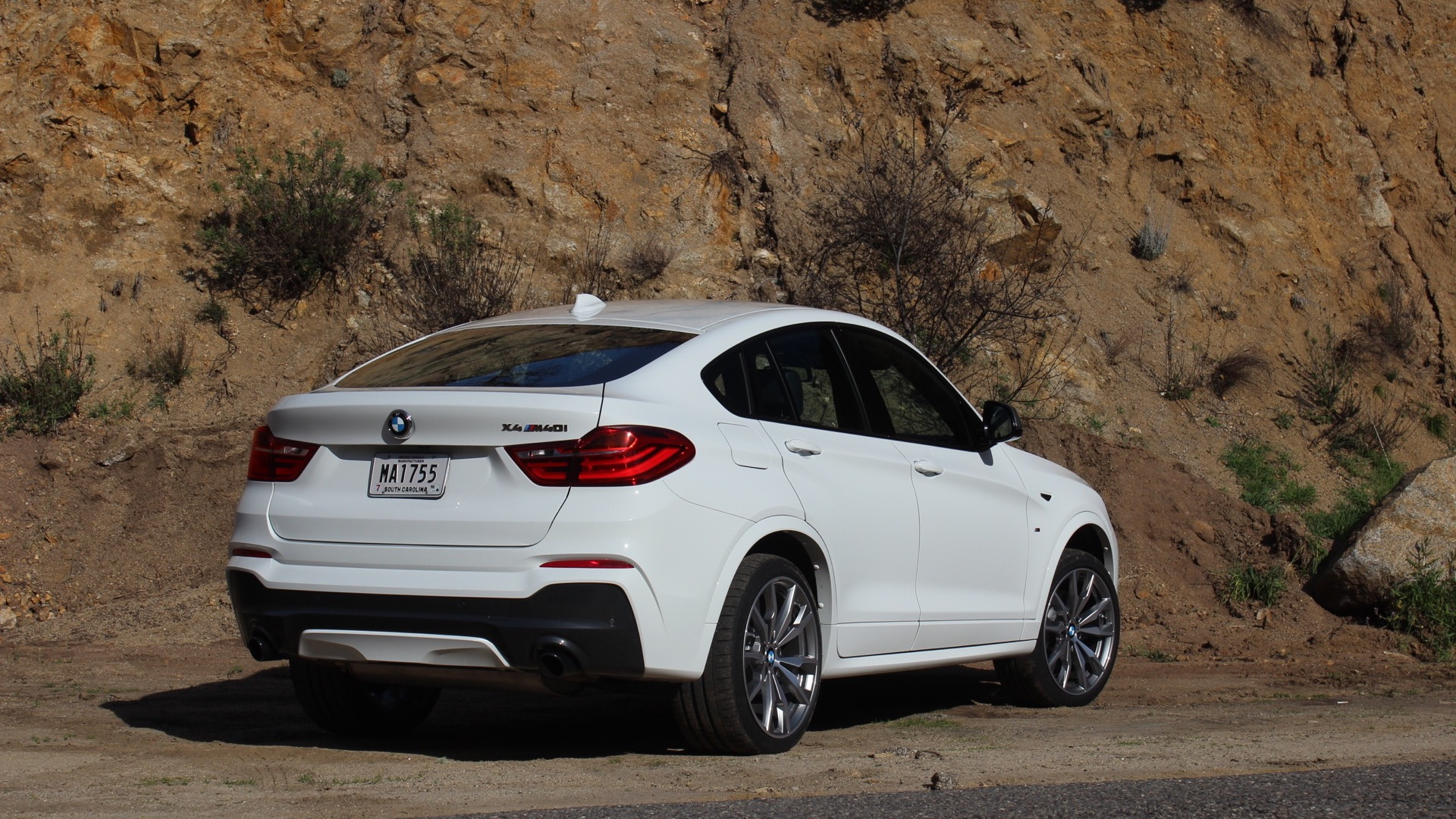 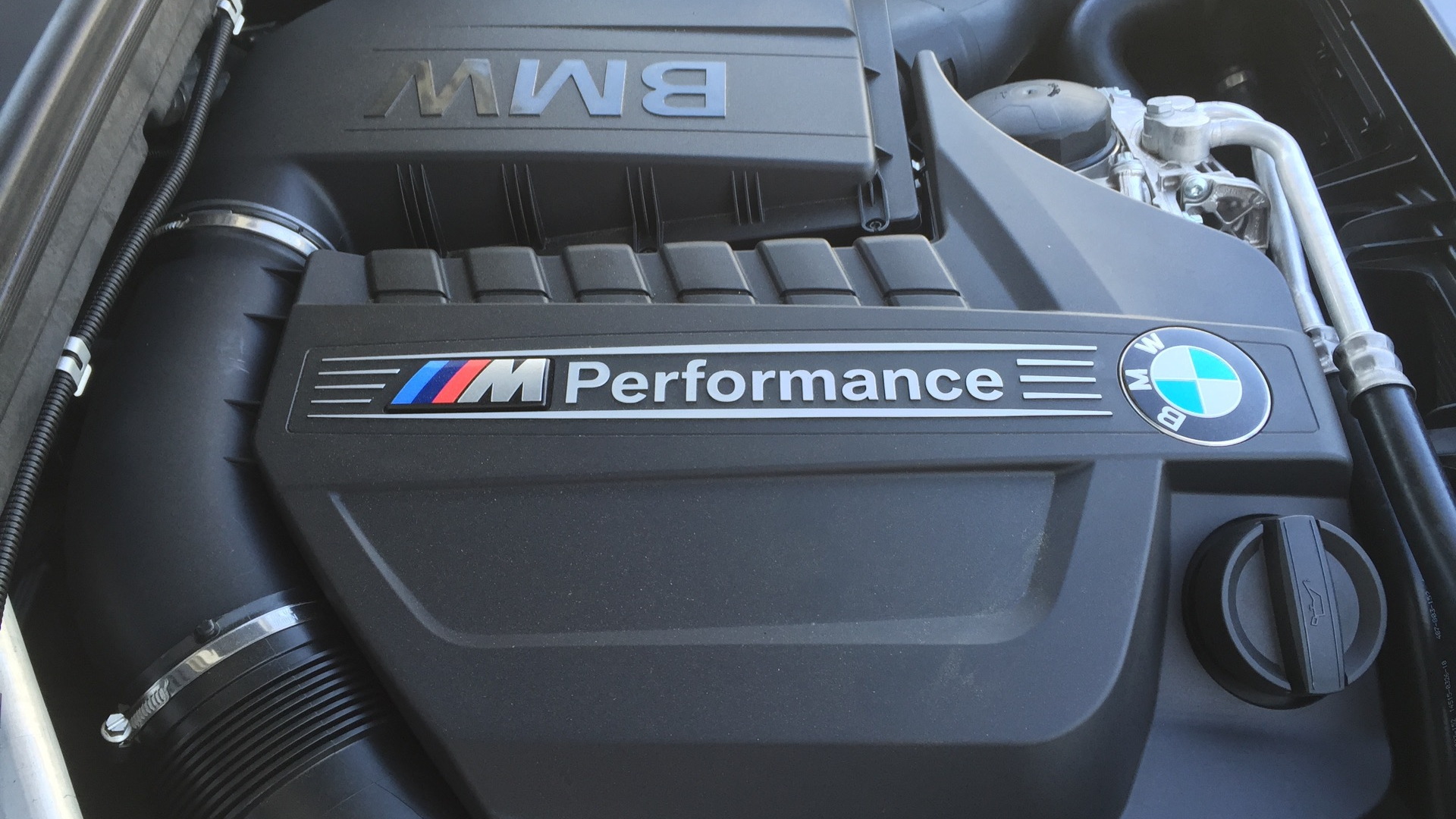 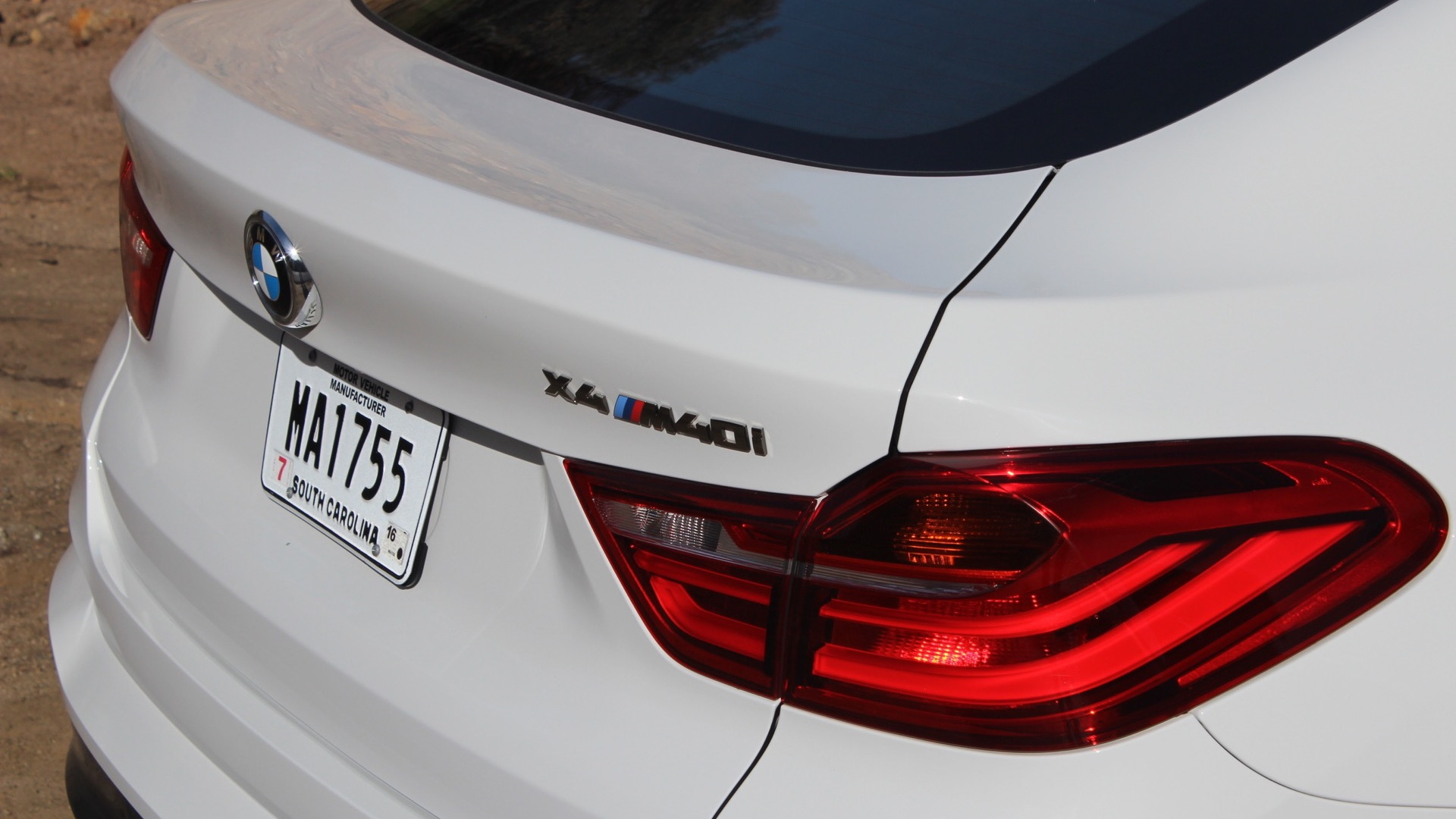 BMW’s current model lineup is a quagmire. Sure, to the brand’s enthusiasts it’s a nice, ordered progression of models and choices; but to others it’s a muddle of models, body styles, trim versions, and powertrain variants that can seem difficult to parse.

The 2016 BMW X4 M40i is a new variant in the German automaker’s ever-expanding lineup of crossover models, but it’s one member of the lineup that wears its mission on its sleeve. Simply put, it’s the go-fast version of the X4—one that includes a list of M Performance components, upgrades, and influence.

It isn’t a true M car, but at face value it’s one of the boldest, clearest declarations of purpose in BMW’s lineup. And it’s just a little bit delightfully irrational. So you can put away the secret decoder ring or those Myers-Briggs results; just go with your gut.

Back to cool, rational terms for the moment, the X4 is a particularly rakish, sporty (coupe-like, German automakers continue to say) version of the X3. And as a niche model, the X4 is one of a handful of different models BMW makes that are all about the same length and width on the outside and offer hatches and versatile, reconfigurable interiors. That includes the X3, the 3-Series Sports Wagon, the 3-Series GT, and the X4, and all of the variants of each.

On the outside, that means 20-inch light-alloy double-spoke wheels, available Michelin Super Sport performance tires, some special gray-metallic accents, black chrome tailpipes, and a sport exhaust system with a valve that allows sportier sounds with wide throttle openings; and inside it gets a series of upgrades including sport seats and an M gearshift lever.

What probably most matters is that the 2016 BMW X4 M40i comes with a higher-output version of the automaker’s 3.0-liter turbocharged six—making 355 horsepower and 343 pound-feet of torque. That snips the 0-60 mph time down to 4.7 seconds, and the additional go-juice is matched with a sport suspension (stronger springs and stabilizers, a special M adaptive suspension, and more camber in front), plus a performance calibration for the steering.

Although the engine makes its peak power between 5,800 and 6,000 rpm, this isn’t one that you need to rev. It makes its peak torque at just 1,350 rpm (up to 5,250 rpm), and the transmission will let you lock in higher gears so as to not upset the vehicle’s balance when quickly taking on tight uphill esses.

The engine’s strong output is put securely to the pavement (or to far less secure surfaces) through a capable all-wheel drive system that incorporates Performance Control electronics for quicker management of torque flow from laterally as well as longitudinally.

It is, without question, quick in acceleration and quick-responding when you need a burst of passing power or want to exit a corner with performance-car exuberance.

You might not even notice in powertrain terms that this crossover “coupe” weighs 4,235 pounds—rather portly for what it is. There’s no way around it; you will notice that weight in corners, or when stepping hard on the capable brakes—where there’s a bit more body roll and nosedive than is typical for a performance model.

BMW says that the increased suspension camber in front helps improve steering response and feedback. While we mostly agree with that, it also made the steering feel unnescessarily busy at times on jittery road surfaces—especially so in Sport mode.

In all, it’s a package that’s capable enough to take on a curvy road, but certainly not downright fun. There’s something about it that feels a bit at odds about itself.

To help cut through all the clutter, we’re going to venture a guess at where the new X4 M40i fits into the market for Americans: It’s the impulse buy of the automaker’s compact crossover lineup. The X4 M40i definitely pulls its weight as a driveway trophy, and a vehicle that will stand out in a sea of luxury vehicles and BMWs.

That said, the X4 has some smart packaging. Despite its gracefully arched roofline—one which visually tapers inward a bit, it manages impressive back-seat space. I’m 6’-6”, and the headliner was just grazing the top of my head in back. Back-seat legroom is on the tight side, but it’s worth keeping in mind that the X4 is essentially compact-sized by North American length and width standards. And the front seats are seriously supportive and comfortable—true sport seats, with adjustable bolsters and thigh extensions for taller drivers.

The M40i starts at $58,795, although there are several significant packages—a Cold Weather Package, Driver Assistance Plus (active blind spot detection, surround view), Lighting Package (adaptive LED lamps, automatic high beams), and a Technology Package (navigation, head-up display, real-time traffic, and more) that can add quite a bit to the bottom line. On an a la carte basis you can opt for upgraded wheels, a couple of different trims, and the navigation, surround view, and active cruise control systems. It’s possible to add more than $10k.

The X4 M40i earns EPA ratings of 18 mpg city, 25 highway (21 combined)—definitely lower than the 19/27 mpg (22 combined) ratings of the mainstream X4 xDrive35i version. The M40i includes engine stop/start, although it’s a particularly noticeable system, with a marked pause, vibration, and starter sound as it activates.

A formula unrivaled—within BMW or elsewhere

BMW officials point out that the M40i badge and kit is exclusive, among crossovers, to the X4; you won’t find this exact build combination in any X3. Although if you believe what’s been reported by some BMW forums, an equivalent X3 M40i model is due for 2017—as well as, eventually X3 M and X4 M models.

Since the X4 M40i is a special performance-oriented build of a vehicle that’s already a niche variant, the competitive set here isn’t all that clearly defined (perhaps the Audi SQ5, the Infiniti QX50, and the Acura RLX among others). However when the Jaguar F-Pace and the Mercedes-Benz GLC Coupe arrive sometime later in the year, it’s only time before a performance-tuned versions of those arrive; and then it’s really game on.

It’s hard to say that the X4 M40i makes a lot of sense—get the X3, or the 3-Series Active Tourer wagon for that—but within BMW’s lineup it earns its place as an interesting confluence of design and performance.

Should you buy it, or one of those more rational models? If you’re hanging on that question at all, the answer’s probably the latter.