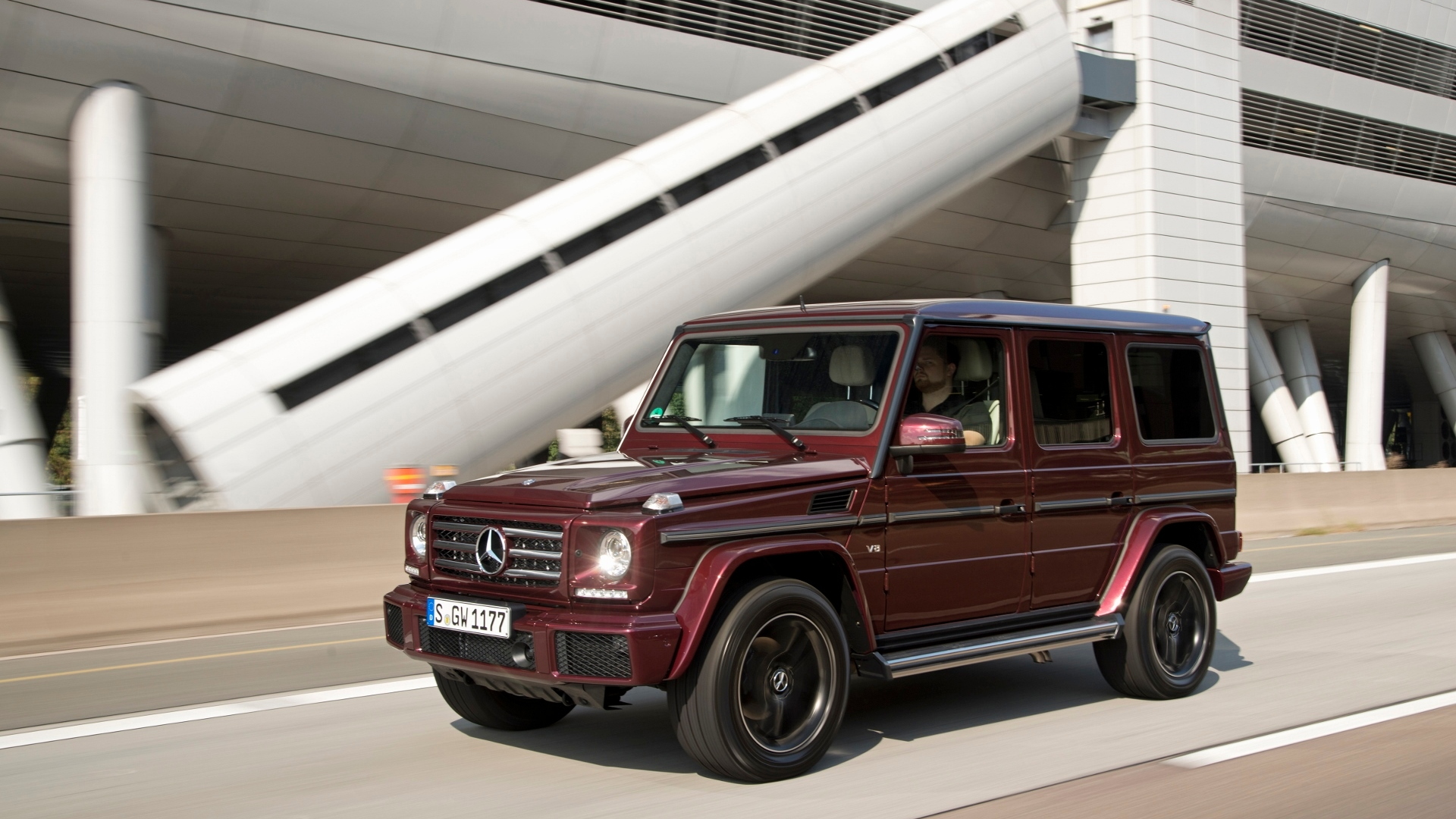 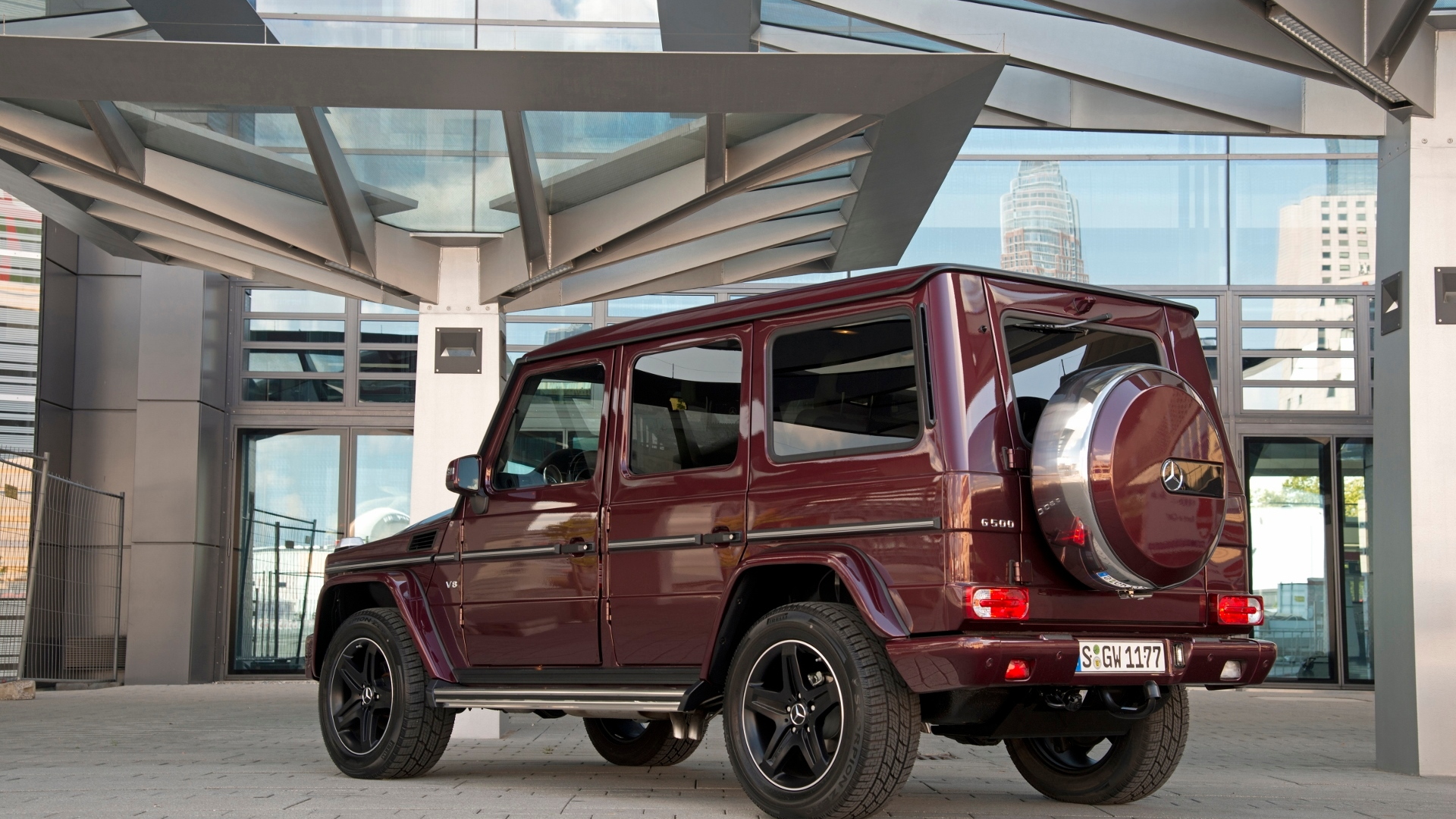 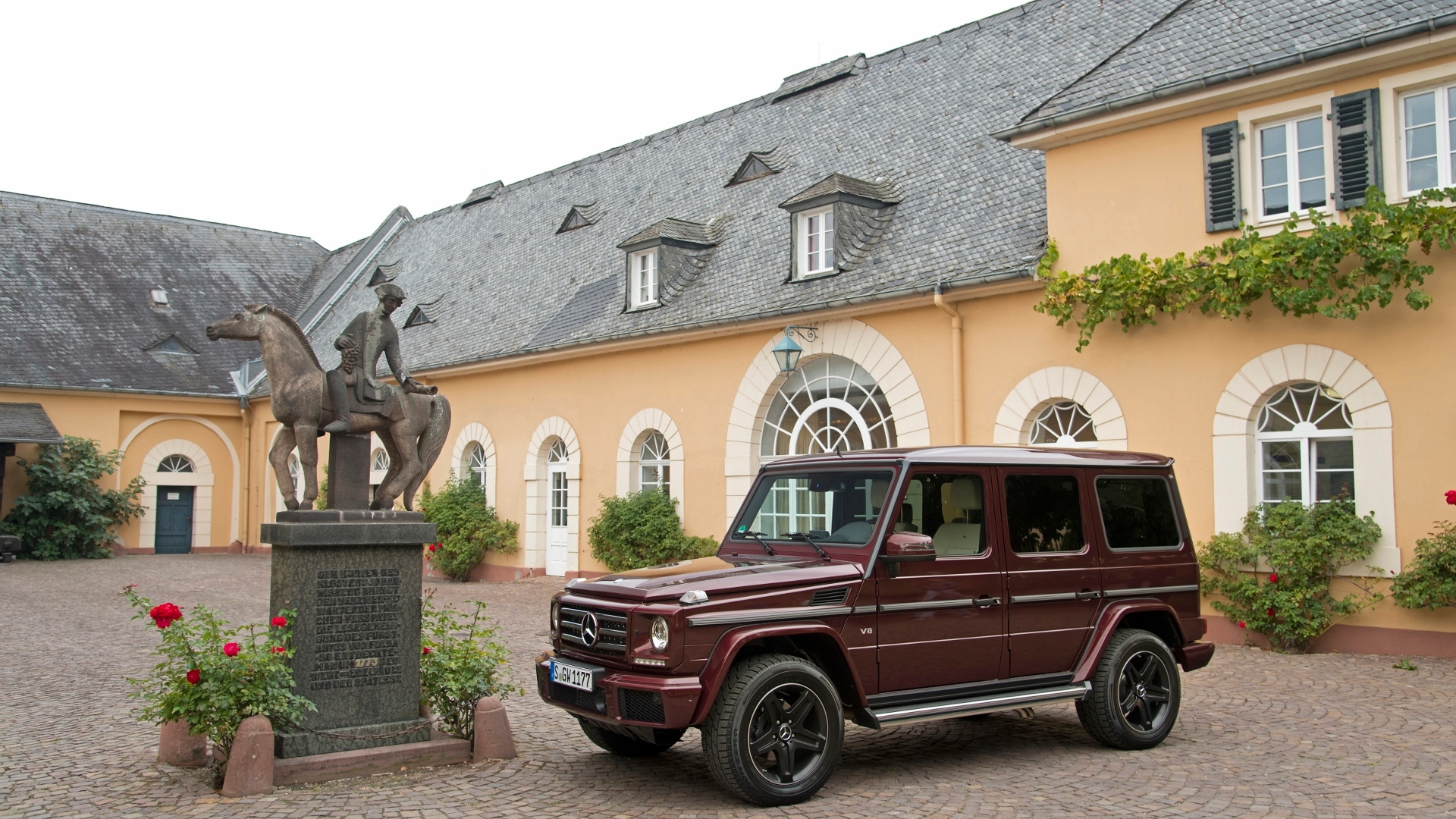 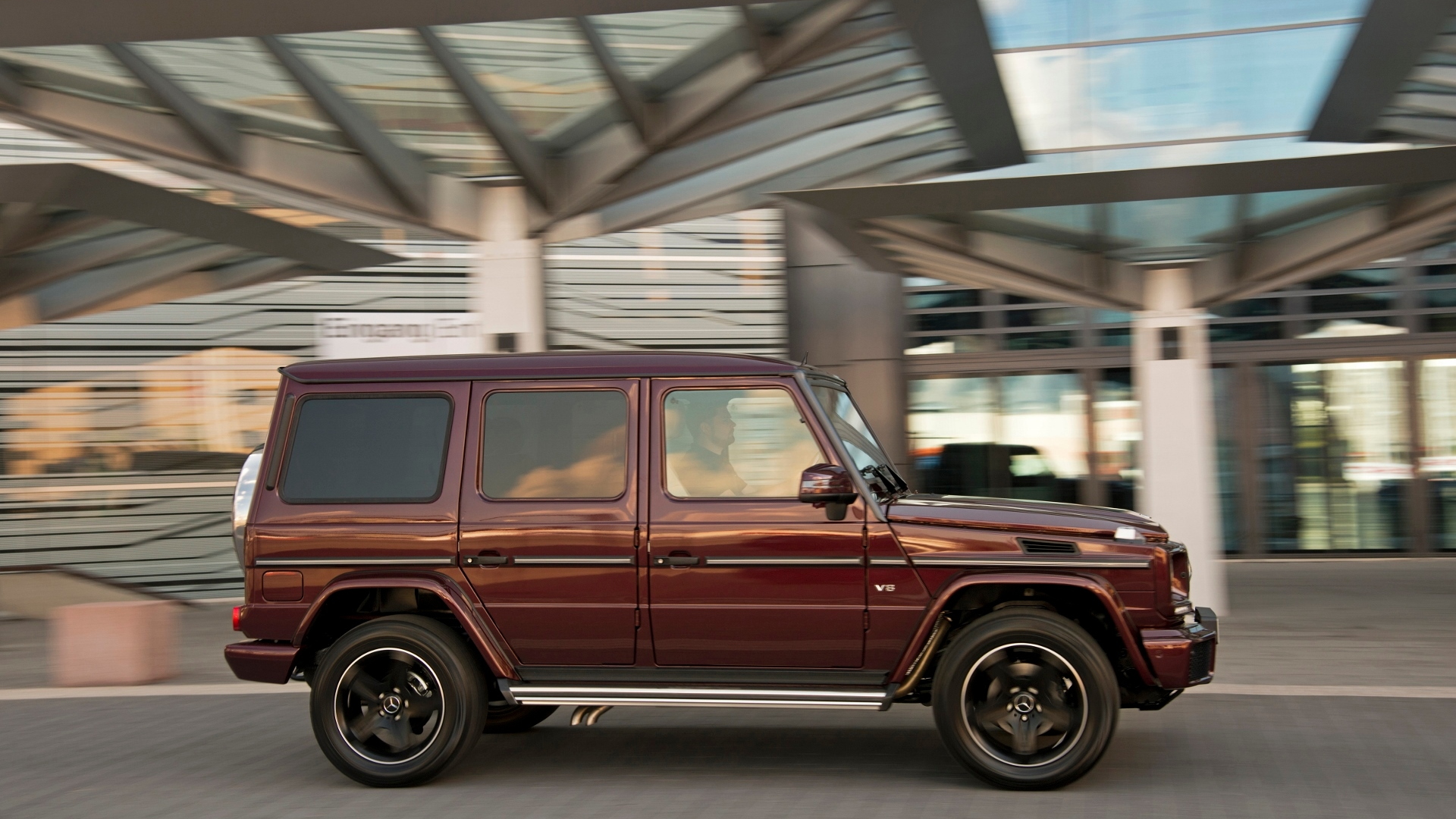 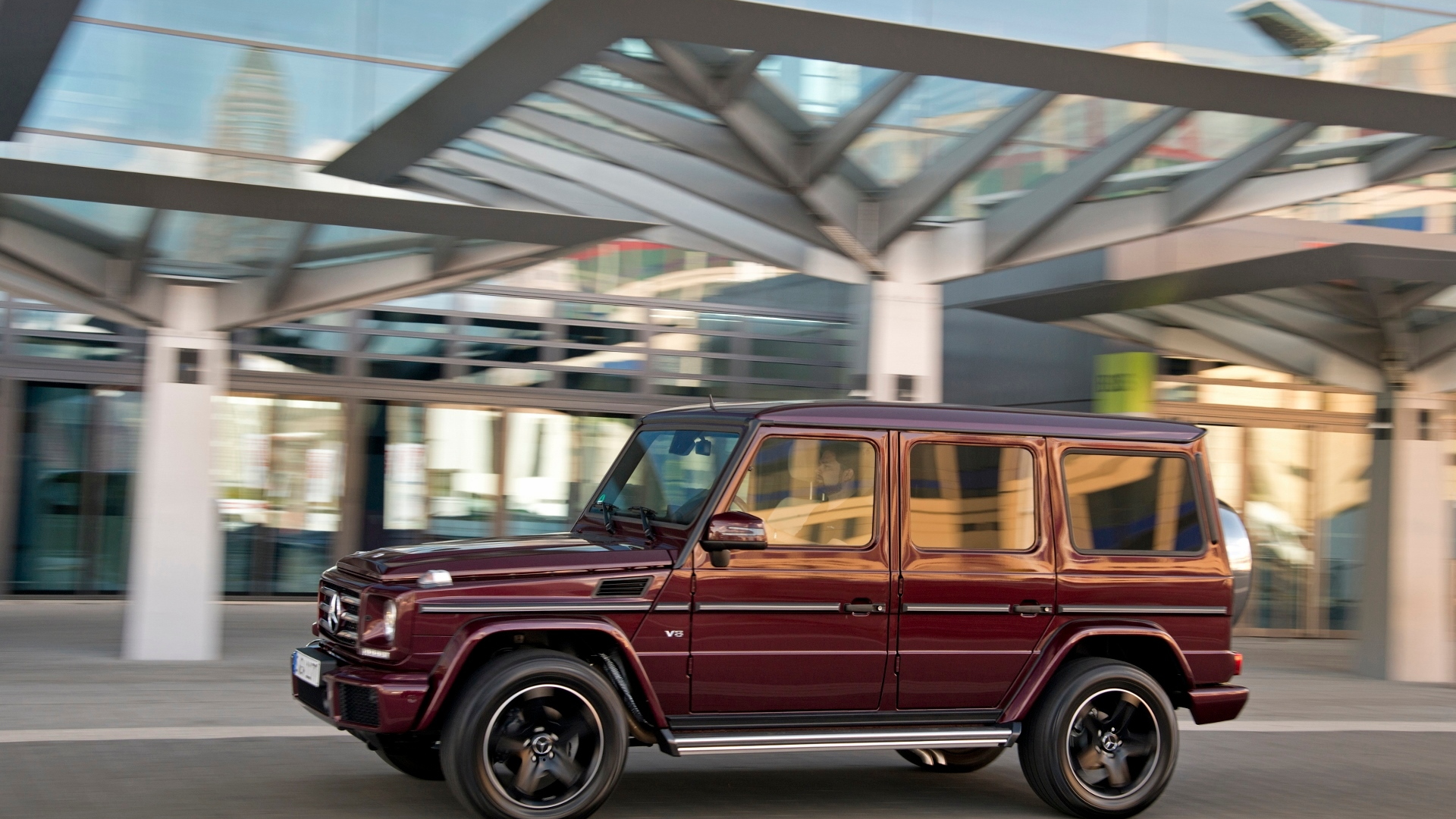 For almost every vehicle on the market, product cycles typically last six to eight years. At the end of that run, the vehicle gets a redesign with either a new or significantly improved structure. That’s not the case for the Mercedes-Benz G-Class. First released in 1979, the G-Class has never been redesigned. Instead, Mercedes has opted to continually update the interior appointments, powertrains, and tech features of the “Geländewagen”—as it’s called in its home country—and that's precisely the case for the reworked 2016 model.

The changes for 2016 are mostly minimal. The front bumper and gauge cluster are revised, adjustable shocks with Sport and Comfort modes are newly available for the base G550, and a series of bold new colors is offered.

However, there’s some pretty important stuff going on under the hood. The G550 switches from a naturally aspirated 5.5-liter V-8 to Mercedes’ new twin-turbocharged 4.0-liter V-8. Output increases from 388 horsepower and 391 pound-feet of torque to 416 horses and 450 lb-ft of torque, and Mercedes says fuel economy improves by 17 percent as well. The G63 AMG model’s twin-turbocharged 5.5-liter V8 also gets a power boost from 544 to 563 horsepower while torque remains the same at 560 lb-ft. Finally, 2016 marks the return of the G65 AMG. Powered by a 6.0-liter V-12, the G65 produces a whopping 621 horsepower and a stump-pulling 738 lb-ft of torque.

In conjunction with the Frankfurt Auto Show, I drove the revised 2016 G550 in and around Frankfurt, Germany, to test the new features and see if I could find any real value in a 36-year-old vehicle with modern mechanicals.

The G-Class's old school feel is quite evident in the driving dynamics. High-riding and skinny, this ancient SUV leans in turns as much as or more than any vehicle on sale today. The new Sport mode limits some of that lean, but this is still a tall, ungainly vehicle. On the road, most of the controls are balky. In addition to the slushy handling, the steering is almost painfully slow, but it needs to be. If it were quick, the G-Class would feel tippy. The steering has plenty of feel, but what you feel are heavy, lumpy tires meandering into corners. Solid front and rear axles give the G Wagon a busy, bouncy ride, too. At least the brakes are strong and predictable, but in total the driving character is quite off-putting. That's all due to the 36-year-old architecture and the fact that the G-Class was built to be a military off-roader.

On the other hand, power is an asset. The new turbocharged base engine offers a little more pep than the outgoing 5.5-liter V8, launching the G550 from 0 to 60 mph in 5.9 seconds versus 6.1 seconds for the 5.5. This engine delivers smooth power with a hint of turbo lag at low rpms and a throaty burble appropriate of a V-8.

The G63 AMG is faster yet, cutting the 0 to 60 mph time to 5.4 seconds and sounding even more menacing. Considering that this is a 5,700-pound truck, both times are very quick. But given that this vehicle is so tall and cumbersome, maybe all that power isn't a good idea. Charge into a corner and you won't have the control of other sportier Mercedes that get such prodigious power.

Both engines work well with the smooth shifting seven-speed automatic transmission, but both will return horrible fuel economy. EPA fuel economy ratings are not yet available, but a 17 percent increase from 12 mpg city/15 highway is still going to be awfully thirsty. Both engines will save a few gallons a fuel a year thanks to a standard Eco start/stop feature that shuts the engine down at stops. This system works seamlessly; the engine starts again very quickly and the restart is virtually undetectable.

A billy goat in a tuxedo

The G-Class was conceived as an off-roader, with a body-on-frame structure, short front and rear overhangs, and the most robust four-wheel-drive system available. It is the only vehicle offered today with front, center, and rear locking differentials. However, Mercedes has outfitted it with luxury appointments. It’s a billy goat in a tuxedo, a rock crawler in an evening gown, and it may be the most capable off-roader offered today. Unfortunately, the Beverly Hills wives and rap star wannabes who buy it will never know what it can really do.

As part of our rainy off-road drive, we tackled a muddy off-road course in G550s equipped with the optional Yokohama Geolandar A/T-S tires. While these on/off-road tires don't have the most aggressive off-road tread, they worked with the G’s various differential locks to ford deep water crossings, conquer steep uphill and downhill runs, and keep plowing forward through mud and over uneven terrain that often put one or two wheels off the ground. Unfortunately, many G-Class owners will never take their vehicles off road, but it would be cool to see a muddy G Wagon proudly displayed in a hedge fund manager's driveway.

Mercedes may charge an arm and a leg for the G-Class, but at least the interior fits the price. Mostly hand-assembled at the Magna Steyr plant in Austria, the interior is decked out with plenty of amenities and quality materials. Standard features include heated front and rear seats, ventilated front seats, illuminated door sills, ambient lighting, and a Harmon/Kardon surround sound system. Buyers get leather upholstery in black, gray or chestnut, and they can opt for several types of trim, including burl walnut, anthracite wood, carbon, black piano lacquer, champagne white lacquer, poplar satin light brown, and carbon fiber. A variety of designo packages with nappa leather upholstery are offered, as are exclusive full-leather designo packages with diamond-pattern nappa leather upholstery on the seats and doors and smooth leather on the dash.

Mercedes’ COMAND system is also standard. It operates the communications, navigation and entertainment functions. Drivers move around an iPad-like center screen via a control knob on the center console and they can use a set of dashboard buttons to get to various screens quicker. Like other systems of this type, COMAND can complicate some functions but it eliminates several buttons and owners will get used to it within a few weeks.

The G-Class is tall enough that some people will want to use the running boards to get in. Once inside, passengers sit upright on relatively flat seats with short cushions that won't provide much long-trip comfort. The short dashboard and old school ergonomics soon become evident, and a look around the rear reveals that space is lacking for an SUV in 2015.

The problem is the late 1970s design gives the G-Class much less width than today's SUVs. The driver can touch the passenger door pretty easily and the driver's door is so close that you can hit your left elbow on the door when making turns. That lack of width also makes the rear seat far more hospitable for two than three and the rear cargo area smaller than the norm. Thanks to a tall roof, the G-Class still has 45.2 cubic feet of space with the rear seats up and 79.5 cubic feet with them down, but unless you want to stack stuff high, this space won't be nearly as useful as the 82.8 cubic feet in the 78-inch wide Land Rover Range Rover. The tailgate also opens like a door instead of a liftgate, and it has an awfully skinny aperture. The cargo area is finished out nicely, though.

The updates Mercedes-Benz has made to the 2016 G-Class are positive, improving power and fuel economy, and adding a touch of stability, while coping with the limitations of the vehicle's 1970s design. It remains one of the world's best off-roaders and a status symbol for people who like to show off their bankroll. However, the old-school design means the G-Class is best thought of as a third vehicle for well-healed buyers who might want to spend a weekend at a luxury campsite once a year. With its $120,000-plus pricetag, cramped interior, and old-school trucky handling, the G-Class may be a hip and sexy truck, but it isn’t a wise choice for anyone.