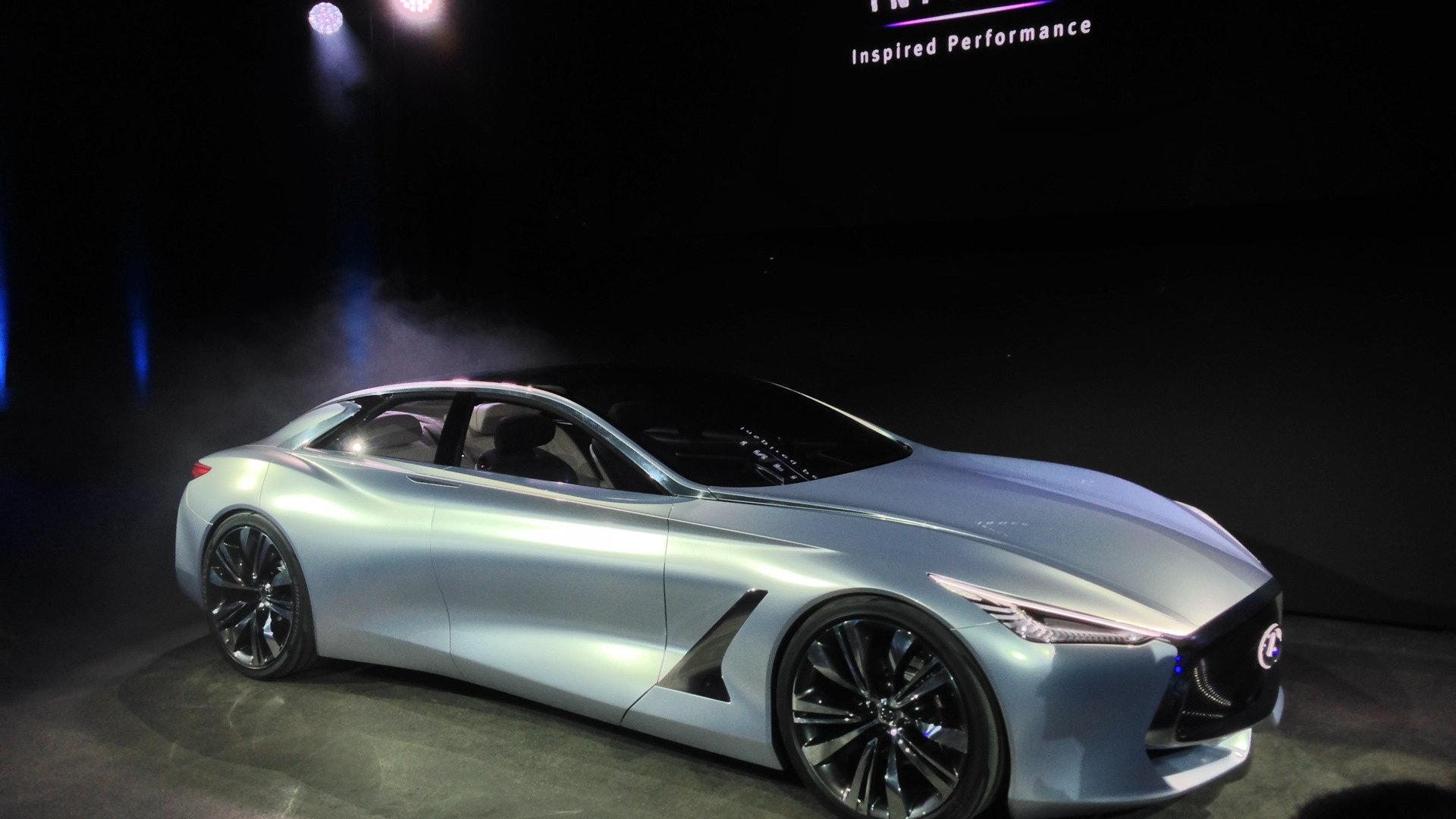 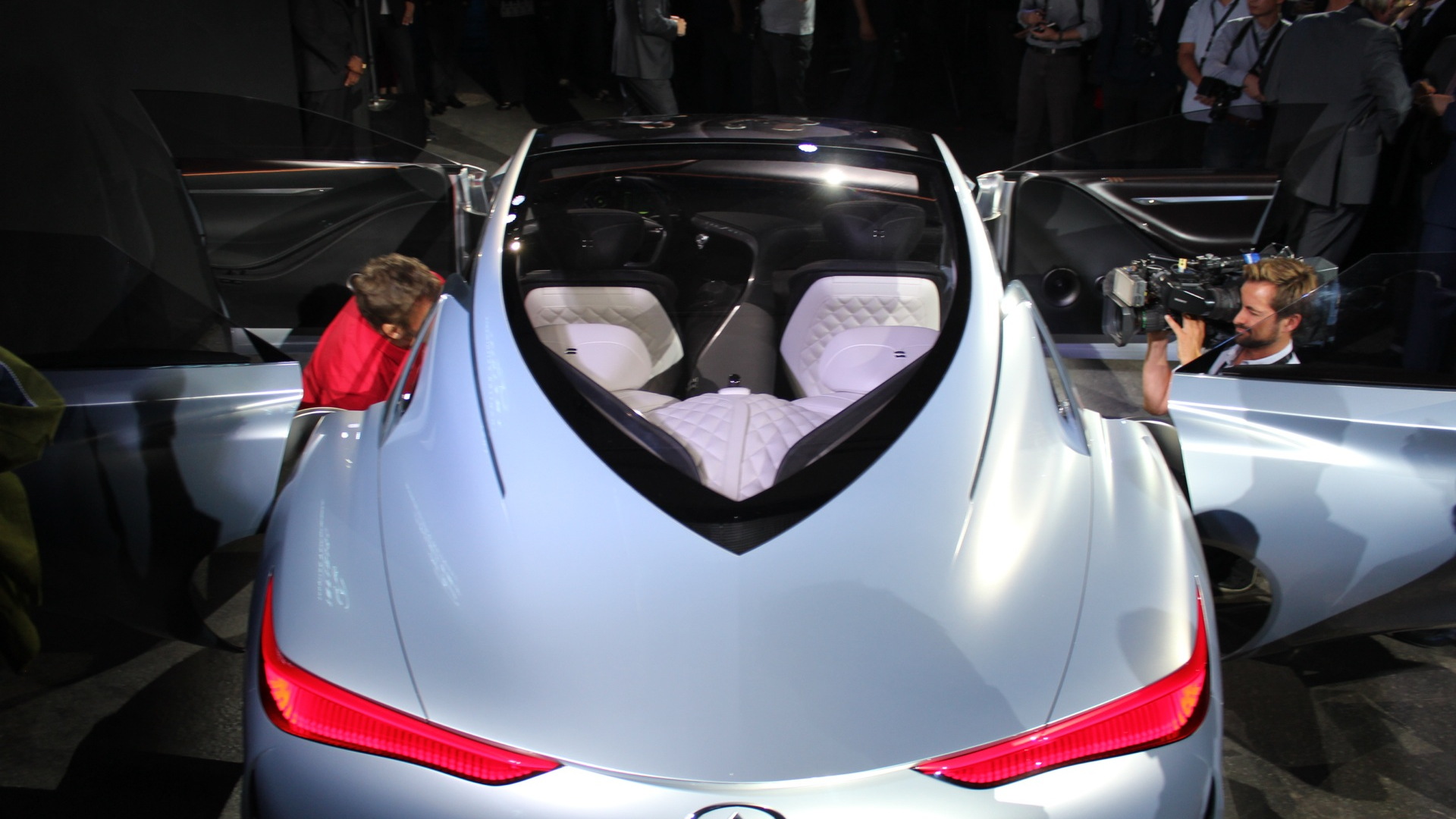 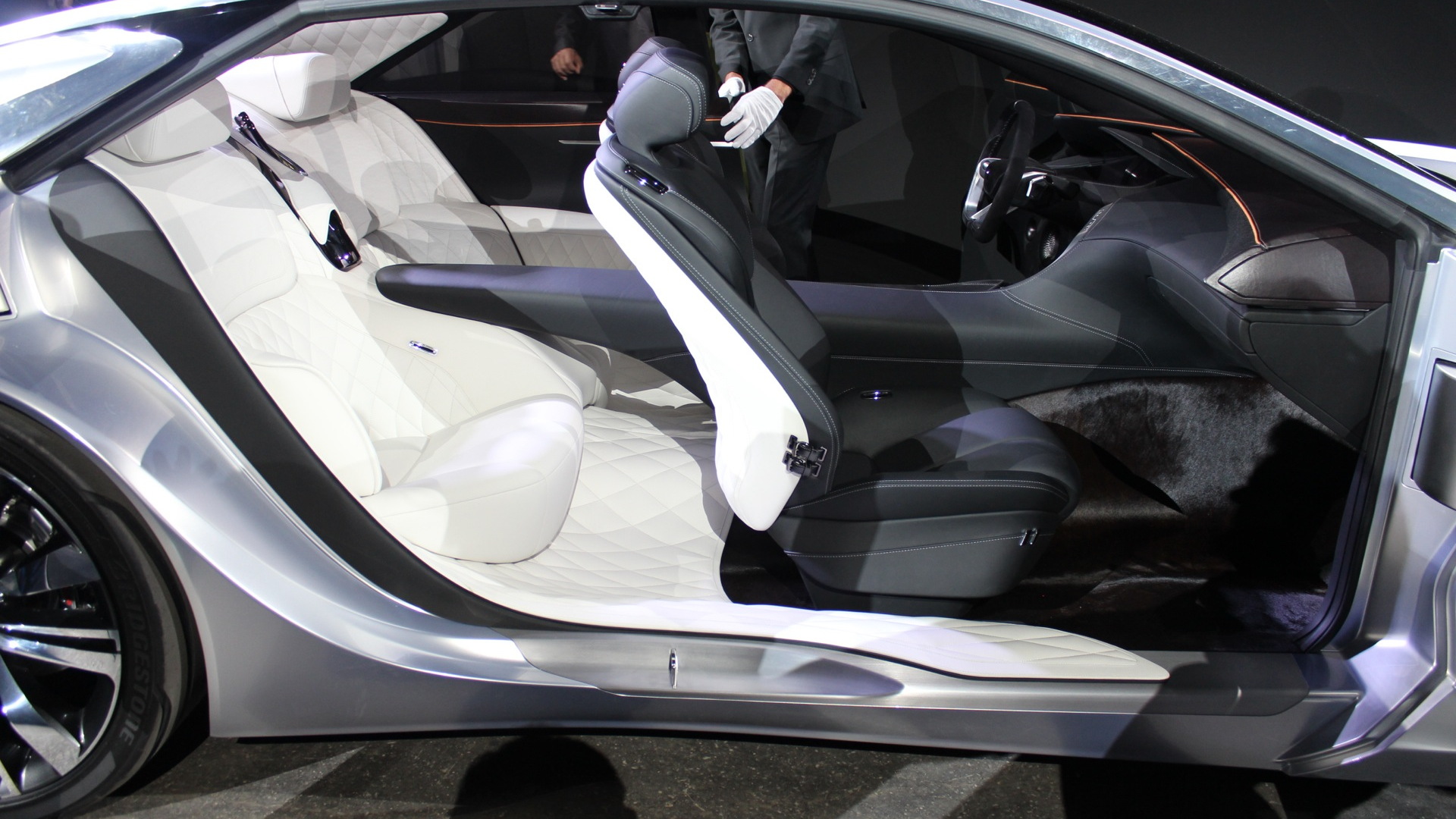 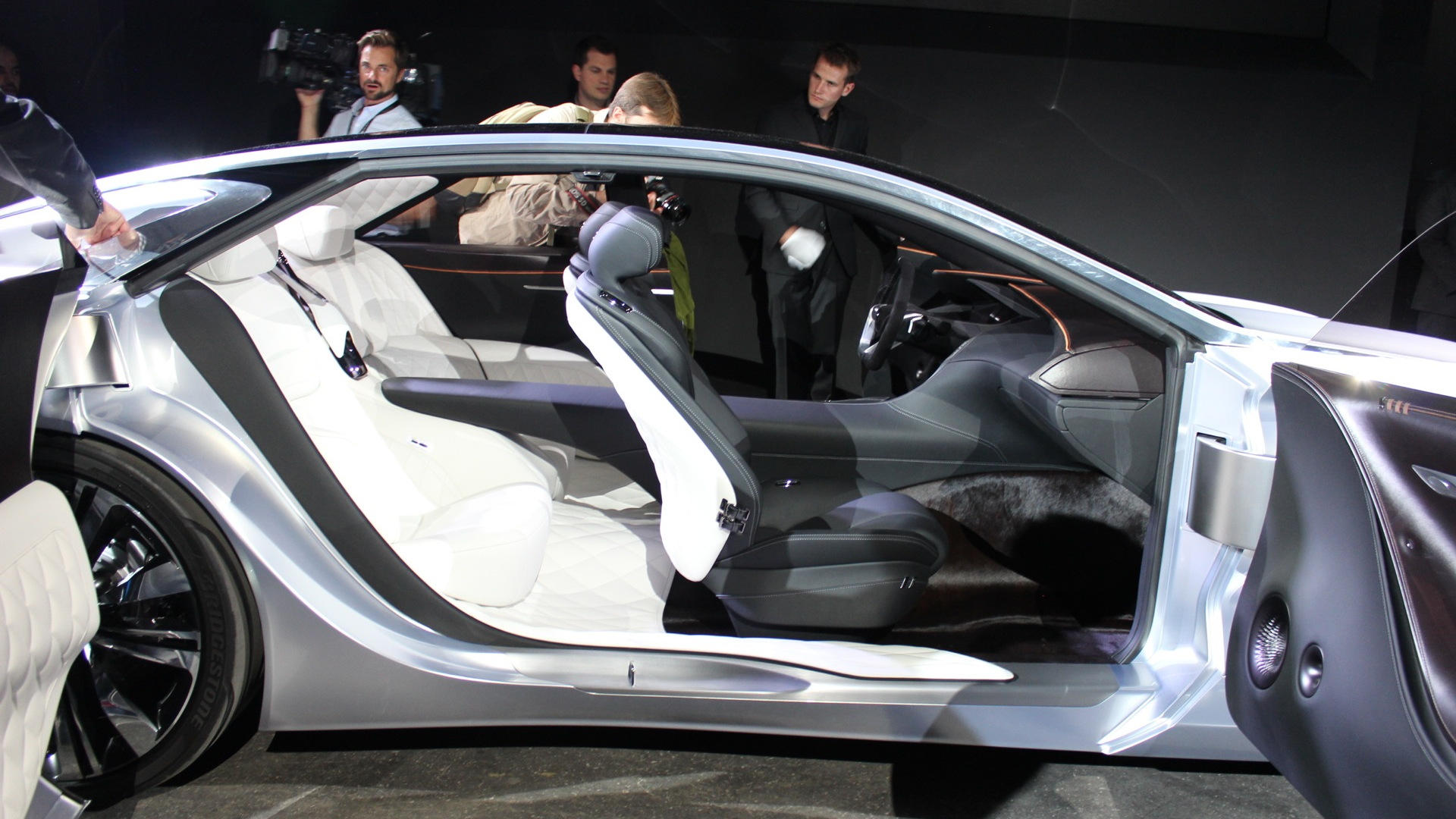 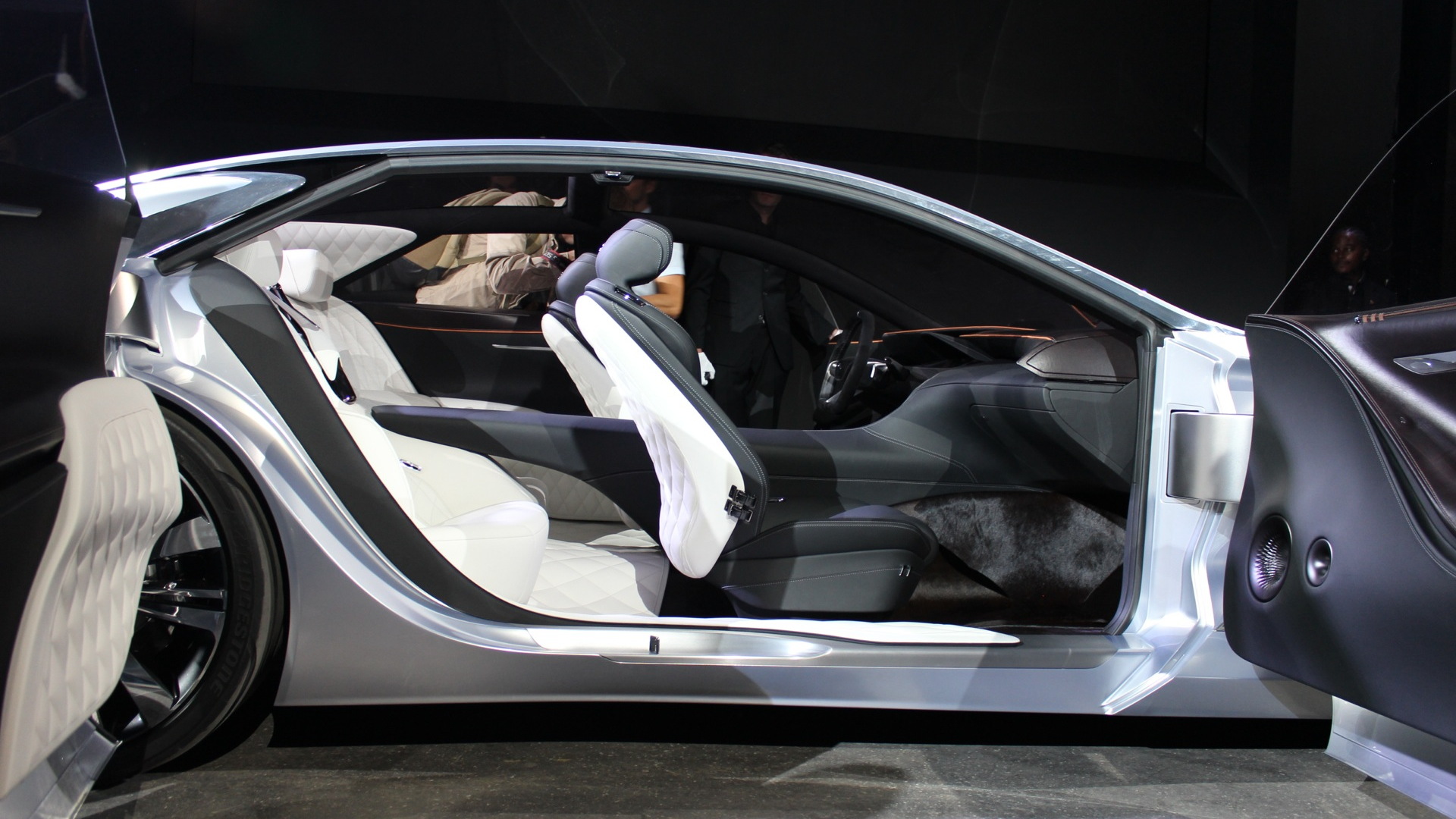 43
photos
Infiniti did more than outline its next flagship sedan, in concept-car form, ahead of the Paris Auto Show this week. Even before the opening of the show, it revealed the car on the eve of the show’s opening to an event with select members of the press—and we were included, so we can bring you a few extra details you won’t find anywhere else.

Introduced by Francois Bancon, a vice president for the brand, the Q80 Inspiration Concept offers a super-swoopy design with a roofline that tapers toward the rear, plus rear-hinged (‘suicide’) back doors, a new twin-turbocharged V-6 engine, a hybrid motor system with all-wheel drive, and a nine-speed automatic transmission. The sum is pretty impressive: 550 horsepower, 0-60 mph in less than four seconds, a 155-mph governed top speed, and claimed 40-plus-mpg fuel economy—all in a ‘1+1+1+1’ seating configuration that should be very comfy for four.

The engine is most definitely not borrowed as part of the alliance between Daimler (Mercedes-Benz) and Nissan-Renault. “This is an Infiniti engine...a new engine that will come in two years’ time,” Bancon said.

It’s a modular engine, meaning that it would be available in different displacements and possibly different cylinder configurations, but officials at the brand couldn’t detail that at this time. Also, Bancon wouldn’t rule out that Nissan would share the V-6 with Infiniti in the future.

The hybrid system in the Q80 Inspiration is “definitely new technology,” Bancon said, hinting that this new system, which would allow a smart all-wheel drive model to send up to 50 percent to the front wheels, or a driver-selectable rear-wheel drive mode, could be shared as part of the alliance. “When we are developing a new technology we want to develop an alliance technology.”

And for those expecting a production-bound version of the Q80 as soon as next year, hold your horses; the Q80 is likely three or more years away.

“Well, now we have to develop the car,” Bancon quipped when asked about the timeline, adding that the typical development time for a car is three to five years, and this concept signals that development is underway.

Can you wait? Something tells us the large luxury sedan market is going to be a very different place in a few years. In the meantime, take a look at these up-close snaps of the Q80 Inspiration Concept.