The National Transportation Safety Board has released a report and images of the accident that injured actor and comedian Tracy Morgan. The report determines that the Wal-Mart truck that rear-ended the van Morgan was traveling in was speeding at the time of the accident.

While traveling on the New Jersey Turnpike near Cranbury, New Jersey, the 2012 Mercedes-Benz Sprinter limo van carrying Morgan and a handful of other comics and friends was struck from the rear by a 2011 Peterbilt tractor-trailer operated by Wal-Mart.

The resulting collision killed comedian James McNair, and injured four other occupants of the van including Morgan. Morgan’s condition has since been upgraded to critical to fair, though he remains in the hospital.

As the accident photos show, the impact of the tractor trailer into the rear of the Sprinter van was severe, and the NTSB says that a review of the data shows the truck was traveling at 65 mph, 20 mph over the posted 45 mph speed limit. About 0.4 miles before the crash location, posted speed limit signs reduced the limit from 55 mph to 45 mph.

A 3D-scan of the crashed Peterbilt was also released, showing significant front-end damage to the tractor. 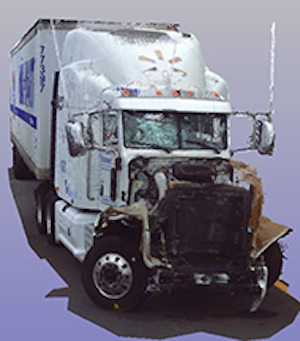