Cars are where people listen to music most often--but the digitally compressed music we carry on iPods, USB sticks, CDs, or stream from the Web has turned our cars into lossy echo chambers.

It's all in the acoustics. Studio-quality audio files become a source of anger for audiophiles, as the music's crammed down into a more compact format that strips it of all its nuance.

Equalization can help, but audio purveyors Harman think they have an even better solution: to "restore" some of the up to 90 percent of the waveform that's sheared off mobile music as it's crushed into a more portable form. 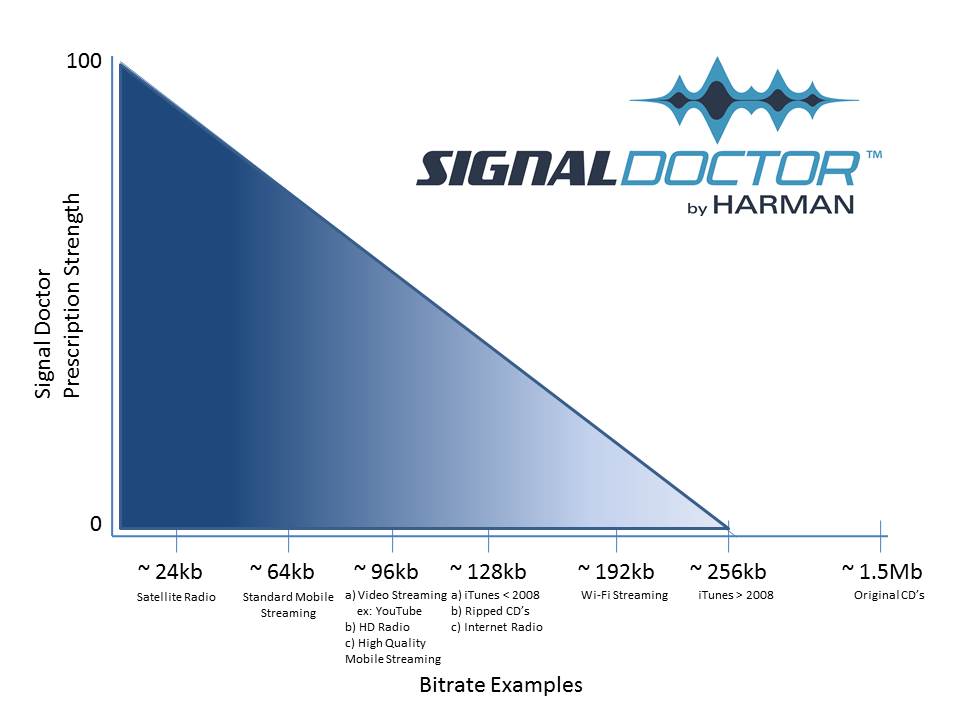 Harman's technology is called Signal Doctor, and it's all about coding and decoding. Signal Doctor monitors audio inputs for bitrates, and when it detects a substandard waveform, it goes to work, reprocessing the file to more accurately reflect those lost sounds.

Jeff Poggi, Harman's Global Vice President, Sales and Marketing, Automotive Audio, says that up to 90 percent of the audio information available from a master recording can be lost as music is compressed. SiriusXM satellite radio is "the worst offender by far," he says--it strips down a 256-kilobit stream of data into a thin 24-kilobit one that's ready to bounce off its satellites, but almost unlistenable for music fans.

To restore the sound, Harman came up with an algorithm to sort out which pieces of the music waveform have been discarded as files are downsized. Based on that information, Signal Doctor can predict and replace most of the information lost to produce a clearer, richer, deeper sound--one they say restores up to 90 percent of the missing data.

It "puts all the color back in, rips the blanket off," Poggi says.

In a demonstration of the technology, Harman's algorithm added layers of brightness and depth to streamed music from Pandora and especially, to satellite-radio selections of a broad variety of music. It turned a Fiat 500's sound system into an AC/DC front-row experience, reconstituting the sound stage much more accurately, and turning slurry lyrics into readily understood English.

Versus ubiquitous equalization functions, Signal Doctor can adapt all on its own as drivers change inputs, from Bluetooth streaming to Sirius to downloaded MP3s--or it can disappear, if it senses uncompressed signals, which it baselines as CD-quality, 256-kbps files.

Signal Doctor's already available in Harman's latest JBL Authentics Series wireless sound systems for the home. Harman also says it can be integrated into any of its systems via the head unit or the amplifier. By the end of the year, some Harman-equipped cars will be fitted with Signal Doctor, although the company hasn't said which cars will adopt it first.