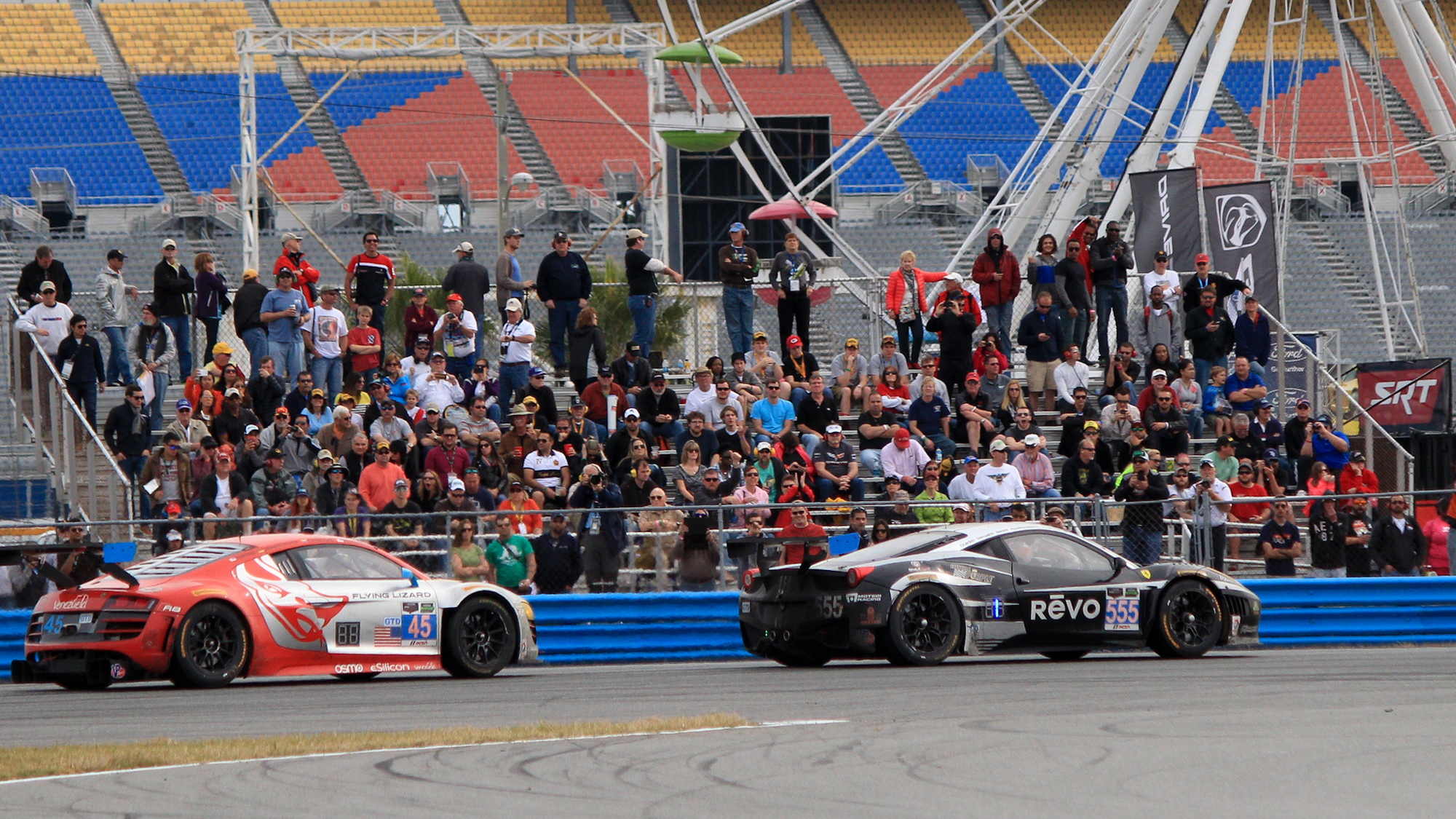 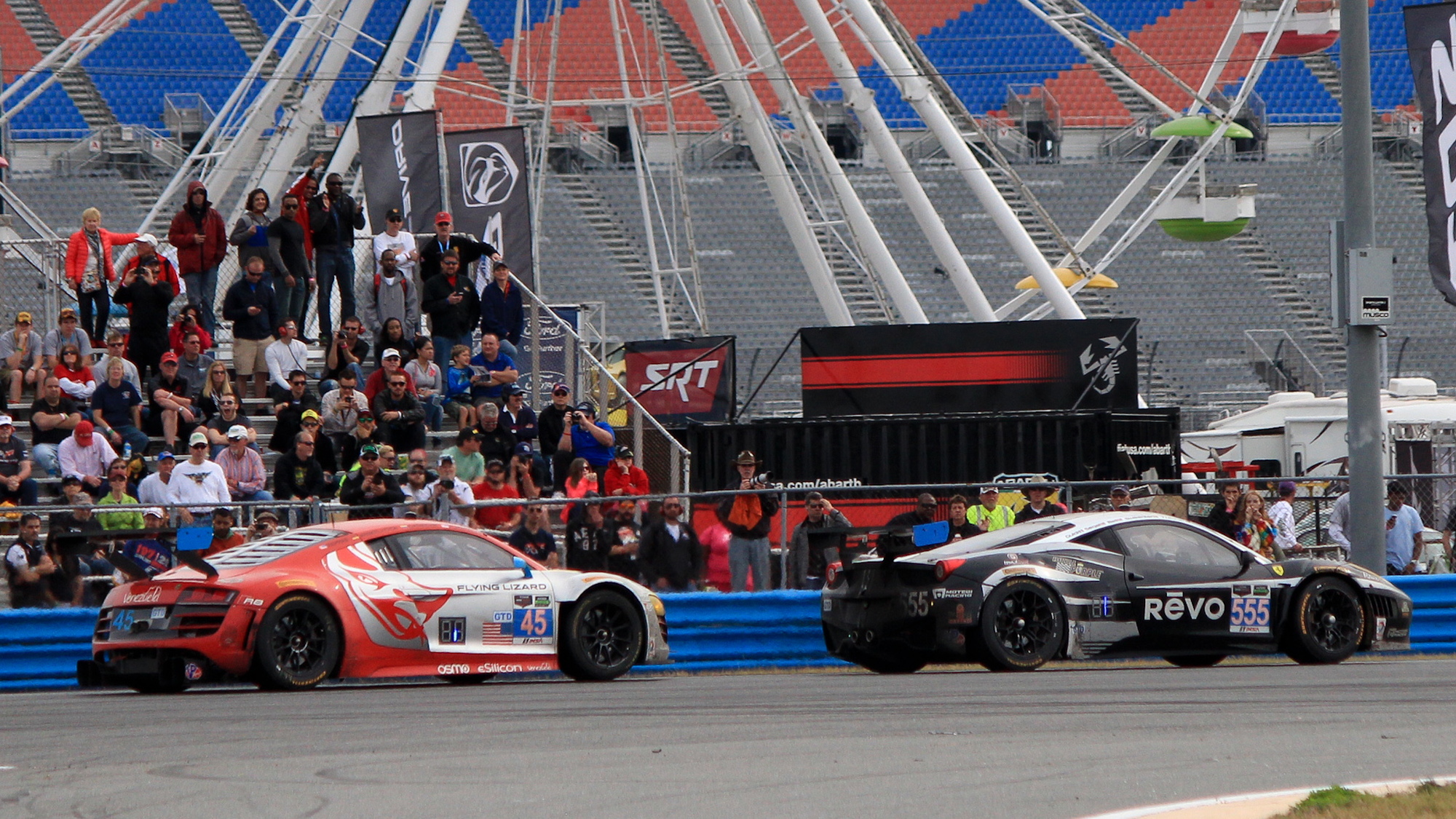 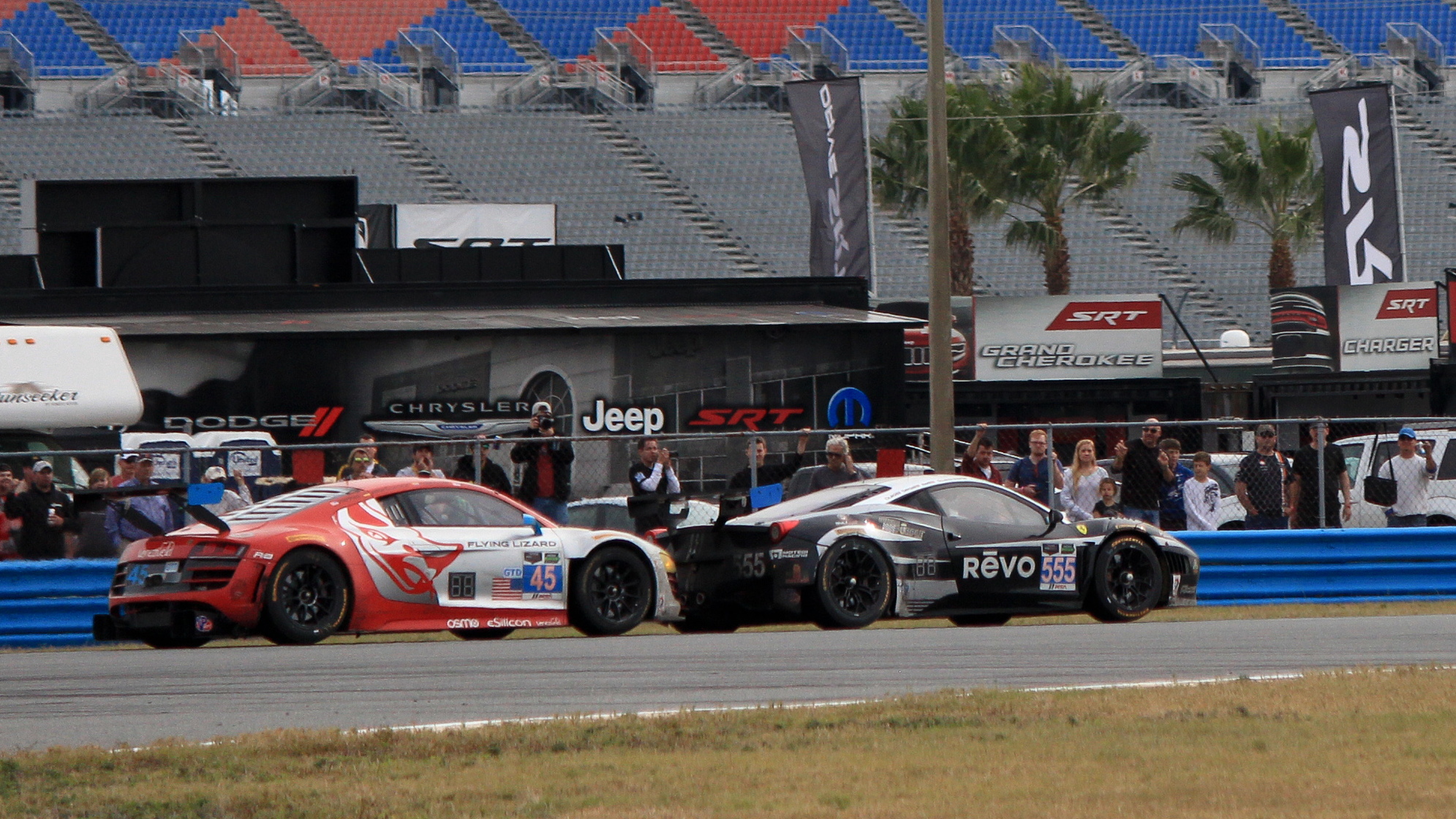 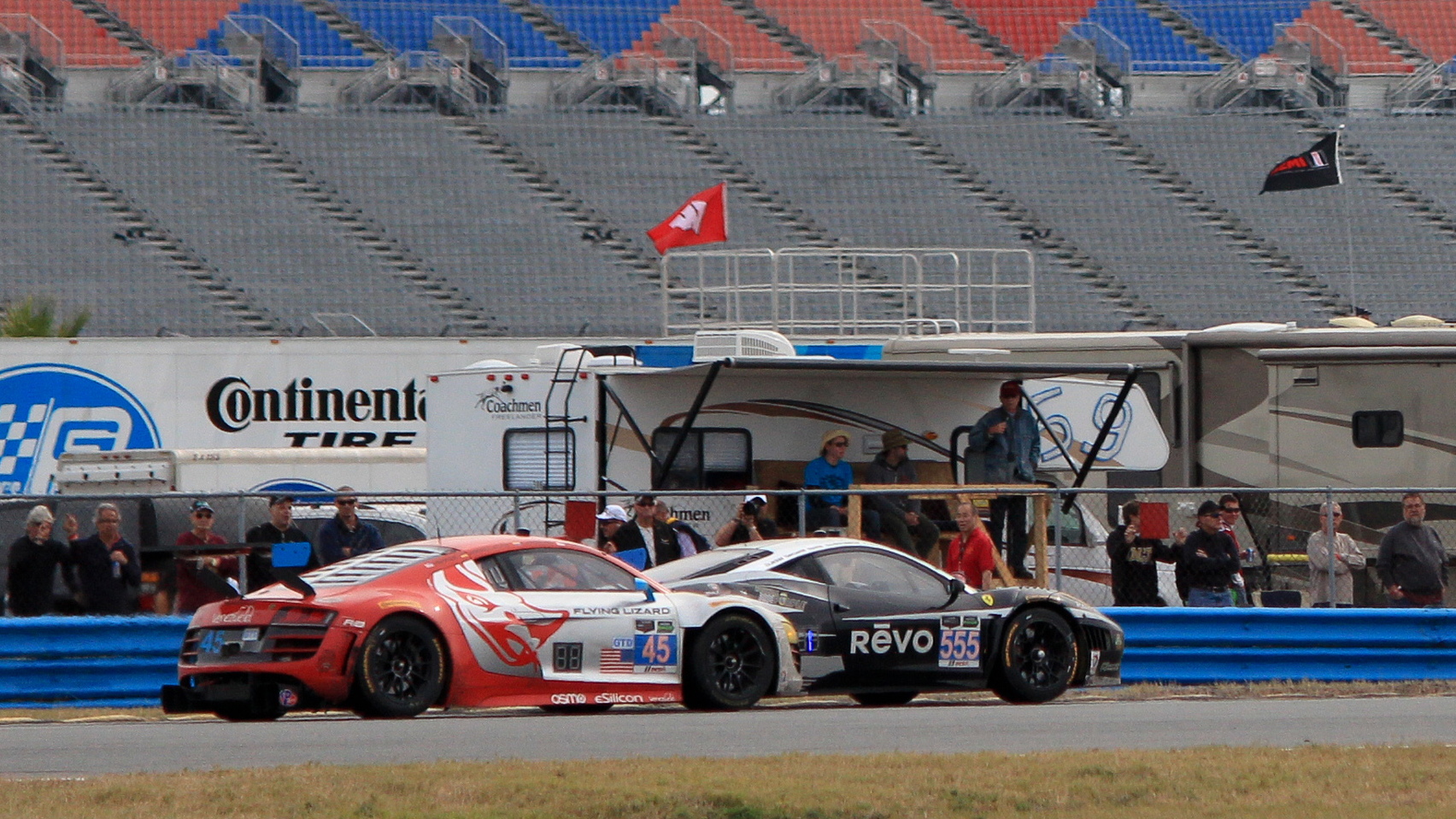 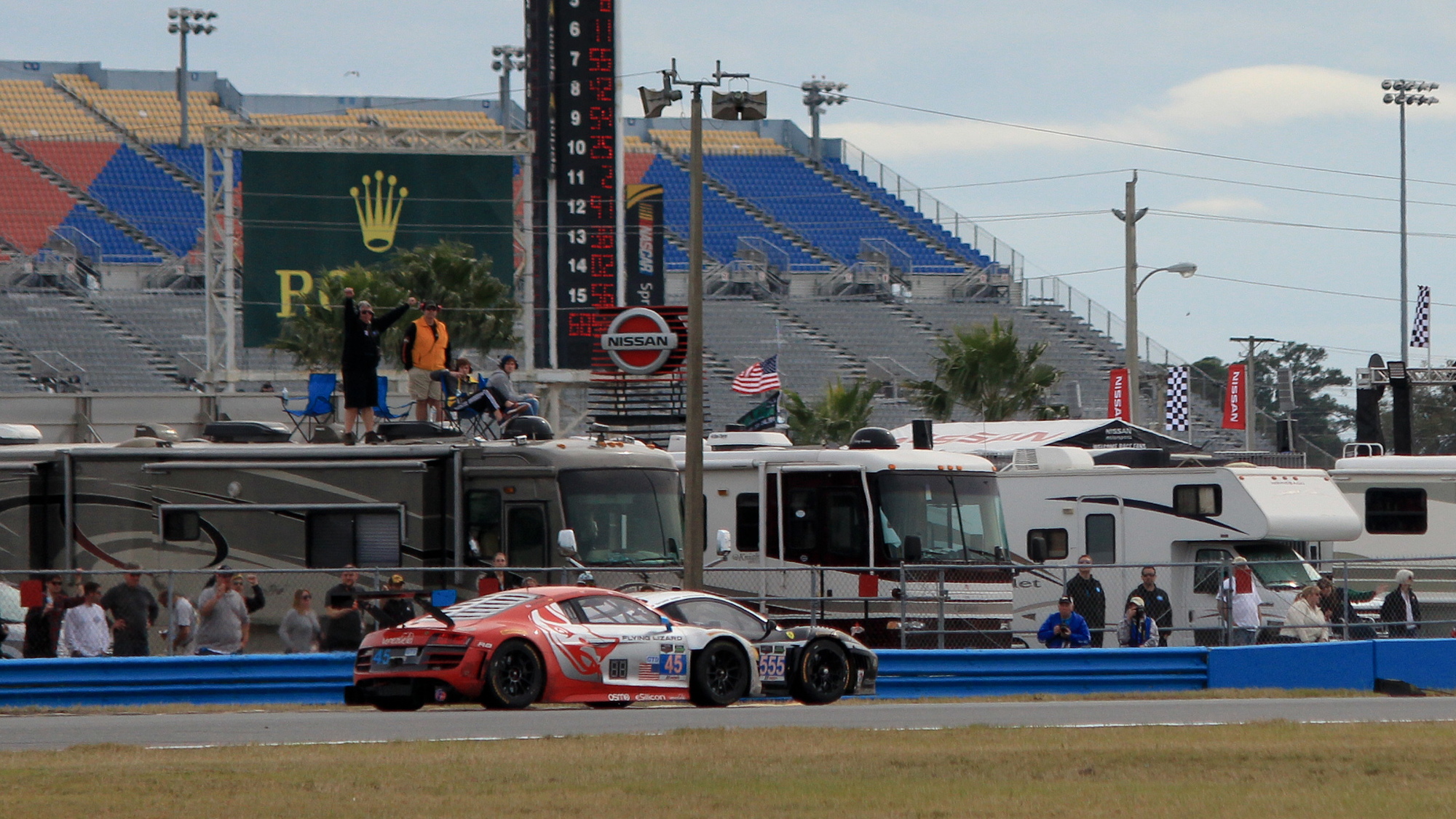 UPDATE: IMSA has reversed its penalty on the #555 Level 5 Motorsports Ferrari 458 Italia assessed during the last lap when driver Alessandro Pier Guidi and #45 Flying Lizard Motorsports Audi R8 LMS driver Markus Winkelhock had an incident in the infield section of the course. Despite awarding the Audi the win during the cool-down lap by penalizing the Ferrari, the sanctioning body has now reversed its decision, reinstating Level 5 and Ferrari as the winners of the GTD category at the 2014 Rolex 24.

The reversal of fates will likely satisfy some fans, but it is a black mark for the newborn series, as the awards ceremonies are over, press releases have been made, and the fans have left the track--along with many of the teams.

IMSA hasn't yet released an explanation for the reversal, saying only that it "regrets the confusion," and "appreciates the patience" of fans, drivers, teams, and the media.

ORIGINAL: It never ceases to amaze us that even after dozens of cars have gone flat-out through an entire 24-hour race, the whole thing can come down to the final lap—the final few turns, even.

That was the case for the GT Daytona class at this year’s Rolex 24, with Markus Winkelhock in the #45 Flying Lizard Audi R8 LMS vying against Level 5 Motorsports’ Alessandro Pier Guidi in the #555 Ferrari 458 Italia.

While racing hard for the class win, there was an “incident,” resulting in Winkelhock’s R8 taking a trip through the grass, and Guidi’s 458 Italia crossing the checkered flag in first place. But on the cool-down lap, the race officials at IMSA penalized Guidi for the move, bumping the Audi into first place.

“The incident in the last lap, I left him plenty of space turning into the kink," said Winkelhock. "But then obviously he knew that if I would be on the outside, I would be on the inside for the next corner, and then he would lose the position, so he tried to put me a little bit on the grass, which worked out for him, so I think that was the right decision [by IMSA].”

There has been some controversy among race fans over IMSA’s call, so we asked Winkelhock what it was like from his position within the car.

“I think there was a little contact, but there was for sure no hard contact,” said Winkelhock. “He didn’t drive me completely off. But he tried to push me into the grass, because he knew exactly, if I will be on the inside for the next corner, that will be a victory for me… I think for him, it was just the last chance.”

The video below shows the incident from two angles, and while the cars did not have any major contact, as Winkelhock said, it’s clear that when Winkelhock was slightly ahead and turning into the for the corner, he left room for Guidi. When coming out the other side of the corner, Guidi, slightly ahead in the Ferrari, left no room for Winkelhock’s Audi, tracking all the way to the edge of the pavement. That left Winkelhock with a choice between forcing contact to stay on track or taking a ride through the grass. The move cost the Audi significant track position--and, after IMSA's ruling, ultimately cost the Ferrari a podium result.