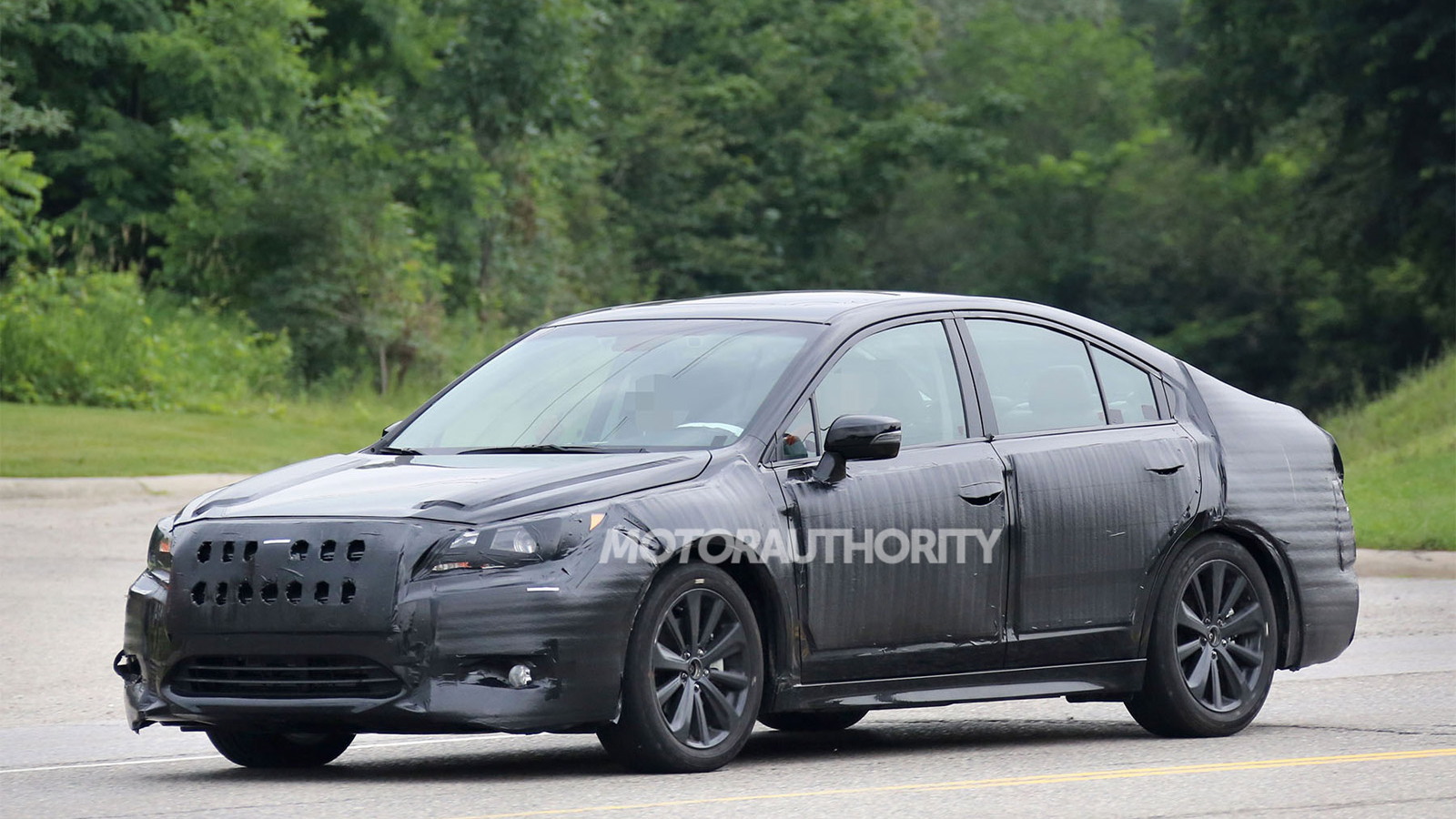 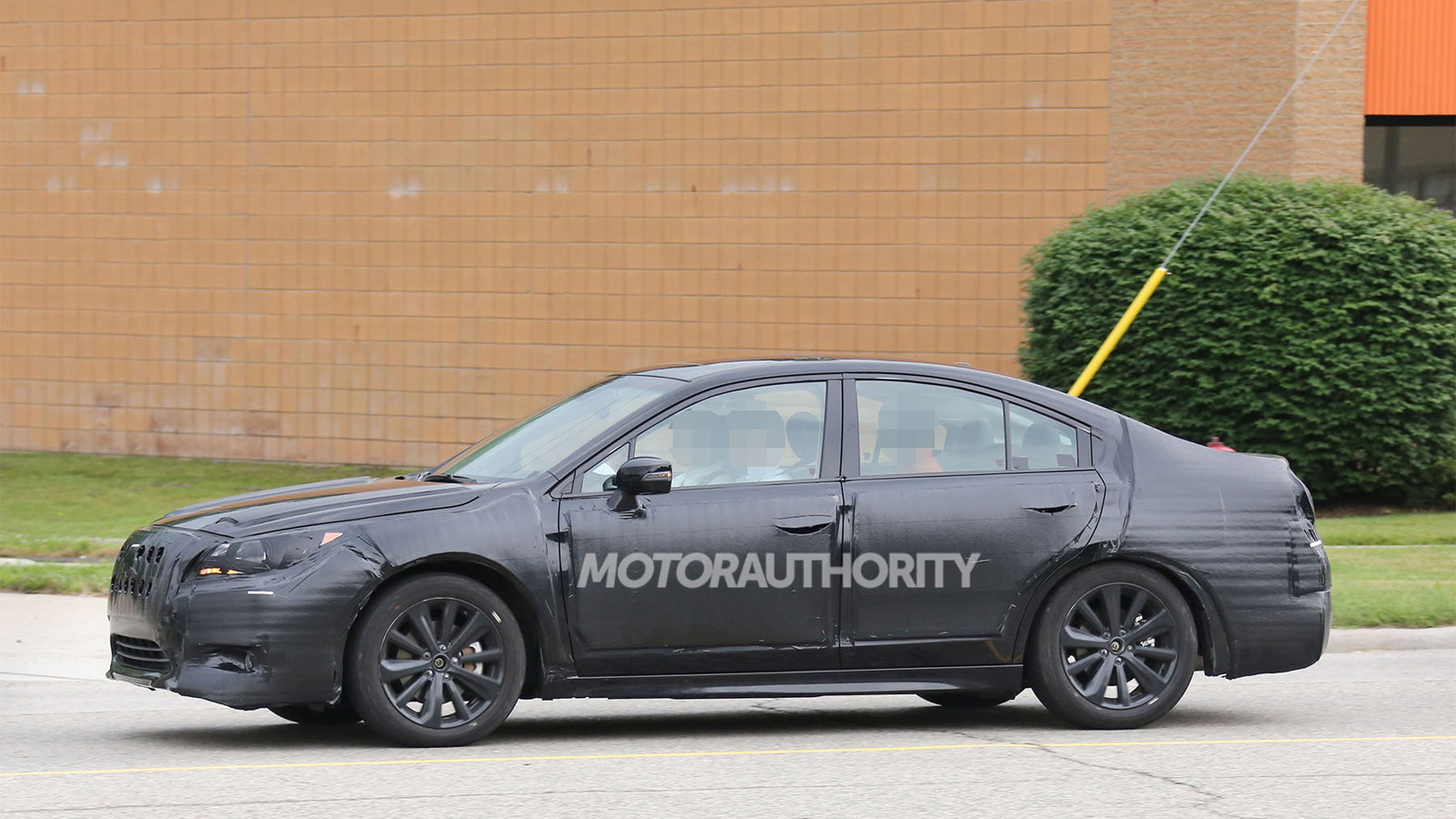 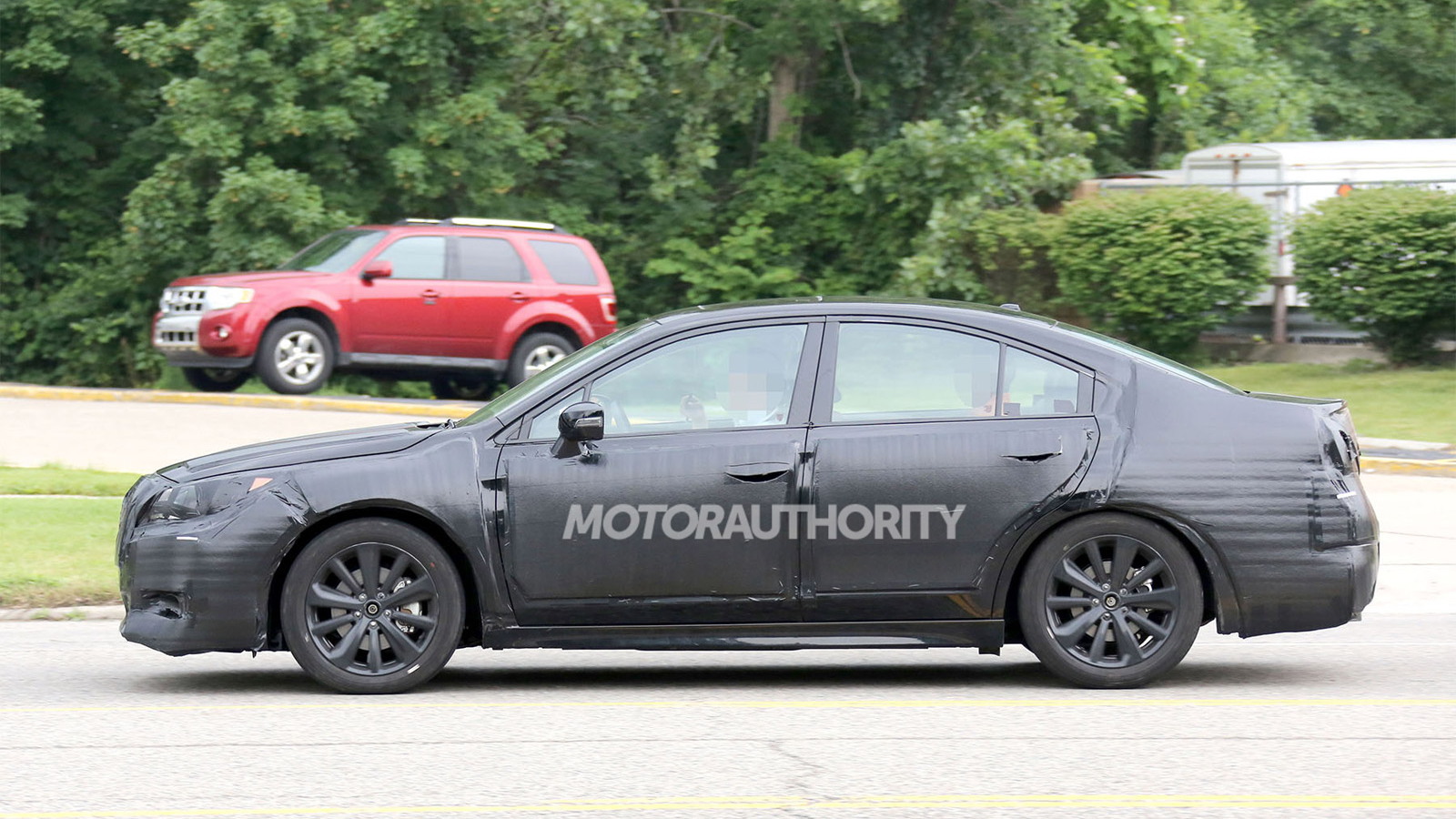 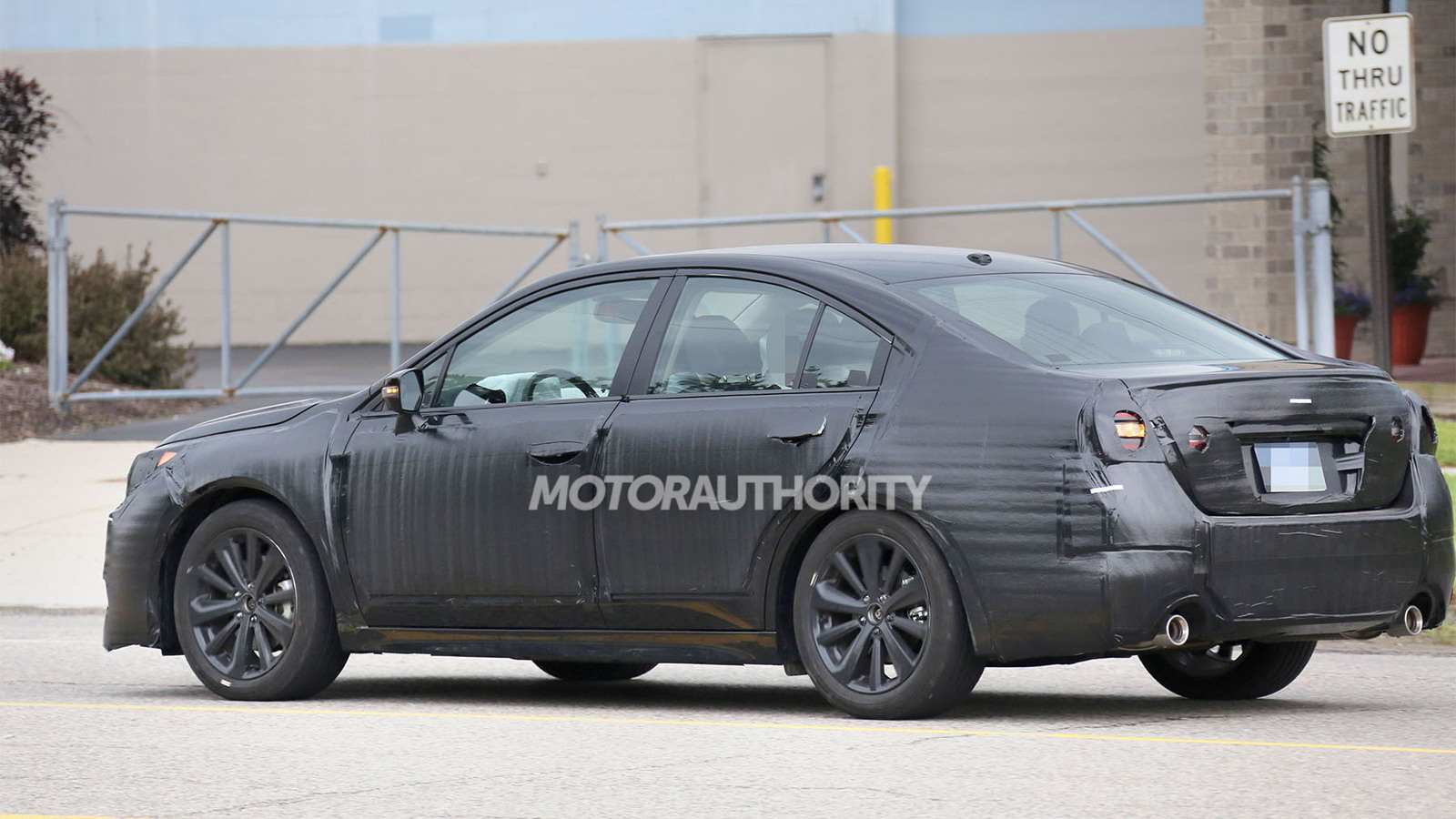 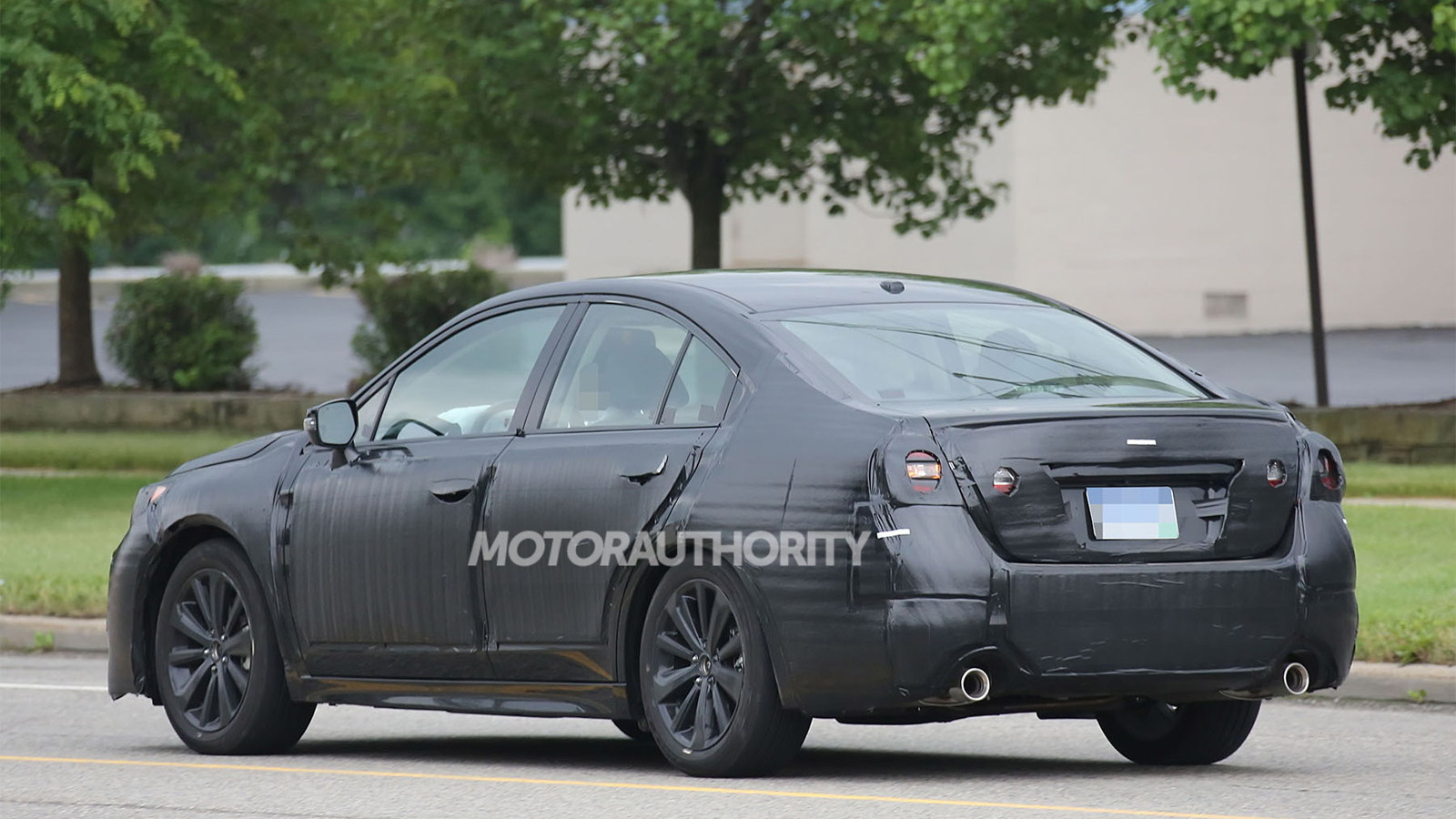 10
photos
Subaru’s popular Legacy mid-size sedan is about to be replaced by an all-new model, seen here testing in prototype form for the first time. This particular prototype was spotted testing in Michigan and features many of the fixtures that will appear on the final production model.

The new Legacy will arrive in showrooms as a 2015 model, in keeping with Subaru’s five-year product cycles, and we should see it unveiled early next year.

Though the prototype is heavily masked, we can clearly see its styling has borrowed elements from Subaru’s striking WRX concept shown at the 2013 New York Auto Show. Key elements include a rectangular grille, coupe-like profile, C-shaped lights at the rear, and dual-exhaust tips.

According to our photographer, the prototype was seen testing alongside an Audi Allroad and the outgoing Infiniti G37x. Symmetrical all-wheel drive will remain standard.

As for powertrains, expect a 2.5-liter four-cylinder unit to continue in the base 2.5i model. This engine was only added for the outgoing Legacy’s 2013 facelift, so expect its 173-horsepower rating to also remain unchanged. A six-speed manual should remain the standard transmission option, with a continuously variable transmission (CVT) continuing to be offered as an option.

Though it’s yet to be confirmed, the 2.5GT is expected to make a return, though this time with a smaller 2.0-liter turbo instead of the former's 2.5-liter mill. This 2.0-liter engine is already featured in the 2014 Subaru Forester where it delivers a stout 250 horsepower and 258 pound-feet of torque.

Our source tells us a hybrid model is also planned, as part of Subaru’s Motion-V strategy to reduce the fuel consumption and emissions of its cars by 30 percent by the middle of the decade. It’s likely this model will replace the range-topping 3.6R six-cylinder Legacy.

Look for a much improved cabin in the 2015 Subaru Legacy, with a less cluttered design and better quality materials. A standout will be Subaru’s new Starlink infotainment and connectivity system which offers a range of services as well as the added safety of Subaru’s own EyeSight safety feature.