Three-wheeler specialist Campagna is know for building some pretty outrageous vehicles. Its current lineup includes the Kawasaki-powered T-Rex 14R and 14RR, as well as the Harley-Davidson-powered V13R.

The company’s mainstay, the 14R, dishes out 197 horsepower and 113 pound-feet of torque from its 1.4-liter in-line four engine, yet weighs just over 1,040 pounds. Getting the torque to the ground is the job of the single 295-millimeter rear tire, which can find itself a bit overtaxed in wet weather.

The open-air V13R gets the same V-Twin engine used in the Harley-Davidson V-Rod, and it cranks out a more-civilized 122 horsepower and 84 pound-feet of torque. The V13R weighs a bit more, tipping the scales at 1,156 pounds, but that also helps the 295mm rear tire gain traction.

The answer, it seems, is not long at all, as Campagna has just announced a new version of the T-Rex that will benefit from BMW Motorrad’s 1.6-liter in-line six-cylinder engine. The T-Rex 16S will also benefit from BMW’s advanced electronics, which include a driving mode selector to optimize grip based on conditions. 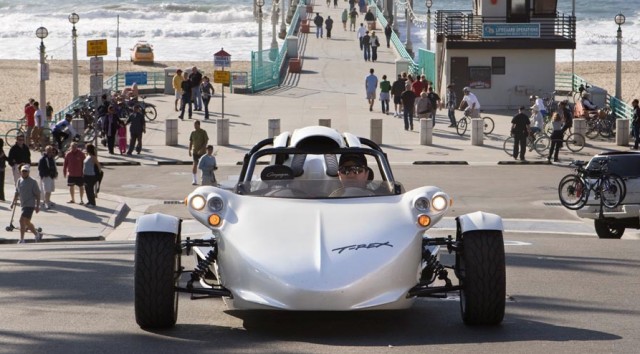 While Campagna has yet to release images or specifications for the 16S, it sounds as though the new model will top the range, with features like an Alpine audio system, Sirius satellite radio and Bluetooth connectivity.

The order books for the T-Rex 16S will open on March 1, with deliveries expected to begin in June. There’s no word on pricing or on how much power the new Campagna model will make, but the same engine cranks out 160 horsepower and 129 pound-feet of torque in the BMW K 1600 GT motorcycle.

If you're a fan of Campagna's existing product range, don't worry: the company will continue to build vehicles with Kawasaki and Harley-Davidson power, too.